Breaking
Is An Internet Service Provider Revolution On The...
Why Selecting The Right Chairs And Tables For...
Walgreens Stock Looks Attractive At $35
How To Get CEOs And Board Directors Leading...
Bitcoin And Blockchain Are The ‘Future’ Of Twitter,...
COVID-19 Pandemic Has Birds Changing Their Tune
Beat Zoom Fatigue With These 6 Tips
How To Sustain (Or Sabotage) A Customer Service/Experience...
How, When And Where You Can See A...
New $2.2 Trillion Stimulus Bill Proposed—$1,200 Stimulus Checks,...
Why Do We Do What We Do? Manipulating...
California Brand Goes All-American As Amazon Bans Foreign...
The 3 Best Analytics Companies of 2020
Senator Cory Booker: Supporting Small, Minority-Owned Businesses Will...
Trump’s Taxes Are Finally Leaked—What’s Next?
Washington Heats Up Ahead Of First Presidential Debate:...
Home Technology Review: ‘Formula Retro Racing’ Is A Wonderful Love Letter To 90s Racers
Technology 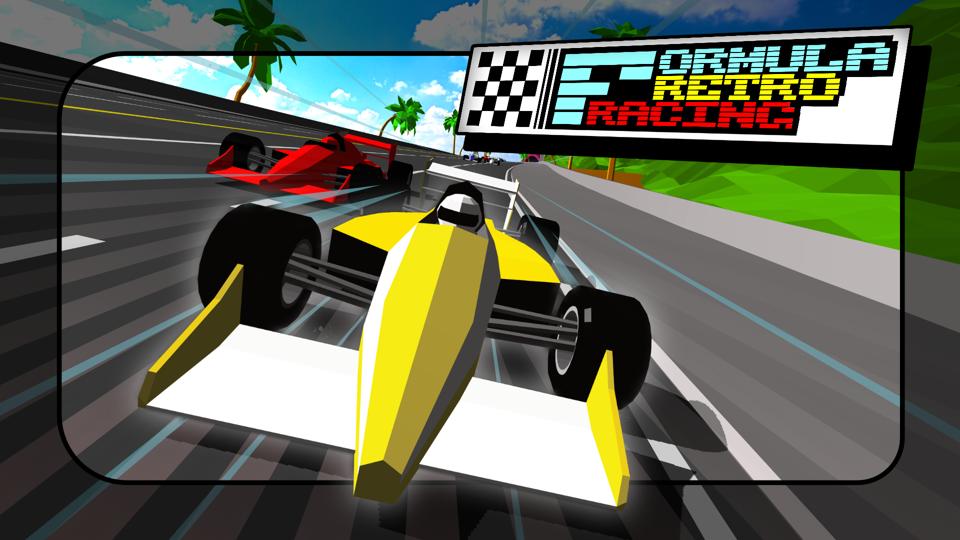 ‘Formula Retro Racing’ is now available on Xbox One and PC.

Given recent events, many of us have reverted to dependable distractions to get through. As a fan of classic driving games, Formula Retro Racing instantly piqued my interest: the low-priced indie, released this week on Xbox One and Windows 10, promised a fresh take on beloved racers of old.

Yet after the first race, it felt like it was way too simple. Luckily, it’s not that, er, simple.

Following the success of the slick Horizon Chase Turbo, and ahead of the release of the thoroughly SEGA-fied Hotshot Racing, Formula Retro Racing is this latest addition to the ever-growing range of nostalgic, low-poly driving games.

It’s a solo effort from British indie developer Andrew Jeffreys, the director of Repixel8, who initially cut his teeth creating homebrew games for legacy systems including the Atari 2600 and Sega Genesis. Following these, as well as both free and paid-for releases on Xbox One and PC, Jeffreys has again drawn on the stylings of a bygone classic–in this case, Virtua Racing–to deliver a retro experience for the current generation. 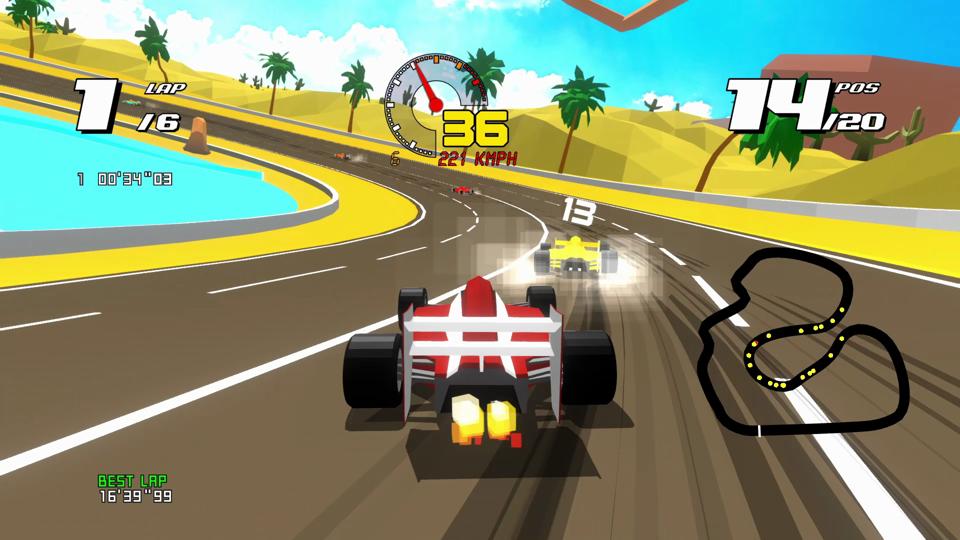 The ‘Virtua Racing’ influences are plain to see.

More so than its modern peers, Formula Retro Racing unremittingly sticks to 90s arcade standards, delivering a bare-bones affair–and it’s all the better for it.

When you boot it up, you’re assaulted with arcade nostalgia: scrolling logos, incredible chiptune music that sticks in your head from minute one, and bright, flashy graphics. But these visuals are also so crisp, in the same way many of us have romanticized our memories of 30-year-old arcade cabinets.

From the outset, and perhaps unsurprisingly for a $12 release, Formula Retro Racing is a very basic experience. The only thing different about the wide car selection is the colour; naturally, I opted for the red-and-white early 90s McLaren vibes. Then, there’s only eight circuits available, though these are stil varied, from high-speed, Indy-style ovals to a damn good recreation of the Monaco Grand Prix. 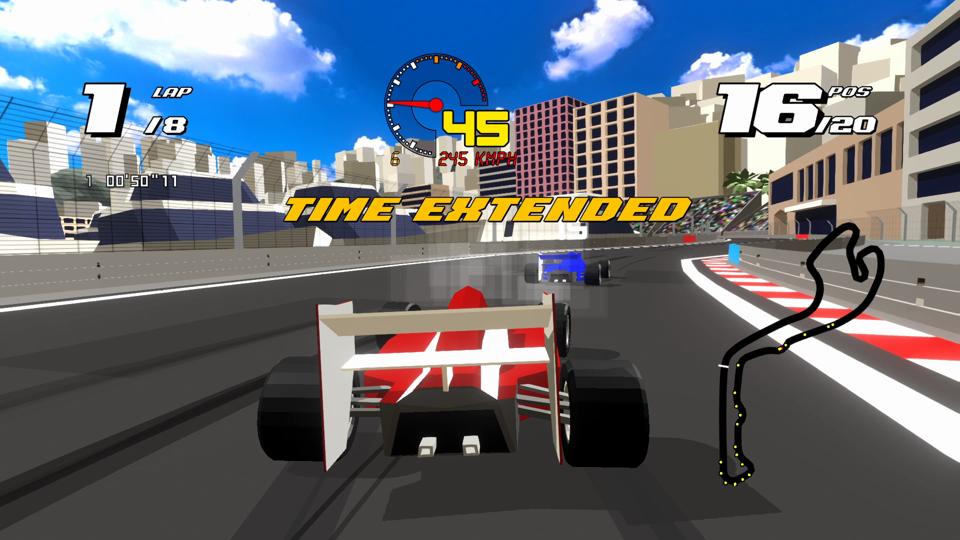 Formula Retro Racing’s take on Monaco is as fun as it is challenging.

Each track has three difficulties. As with any game, I start at the beginner level to gauge the mechanics, on the first track. Nice visuals and responsive controls aside, this initial race was one of the easiest and most repetitive experiences I’ve ever had in a modern racing game.

Luckily, this is not the core experience–if anything, it sets up a false sense of security. On beginner, destruction physics are switched off; the time extension top-ups are massive; the race track doesn’t demand even a hint of braking. Feeling like ten men, I tried it on the highest expert setting. Oh boy.

I could never have predicted hardship like it. With the chaotic crash physics of the upper two difficulty tiers, perfection-demanding time extensions and subtle, shake-and-bake-esque drafting needed to overtake the opposition, the simplest courses become death races. 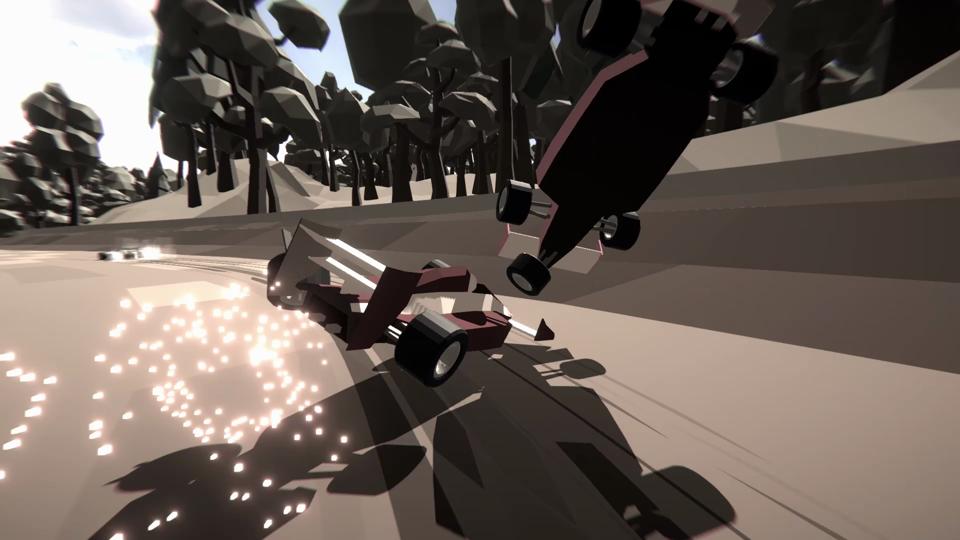 And that’s just your classic, simple circuits. On courses such as Monte Carlo, winning the race on easy is surprisingly tough, especially if you accidentally, and inevitably, tank it into a wall. Upping the difficulty on this track feels as brutal as the infamous 1996 Monaco Grand Prix, and you will not be Olivier Panis. My performance was closer to Andrea Montermini.

Formula Retro Racing quickly and unremittingly takes hold of your pride; you know you can do better with another go, so you try and fail and try and fail and try and have limited success, and it feels great. All the while, the music buries deeper into your brain, the straightforward mechanics remain as dependable as ever, and the outcome is the same: just one more go. It’s so much like arcade games of old, you might look for a coin slot in your Xbox to push another quarter into.

Some things do need work. The “time extended” overlay–especially on a fastest lap–swamps the screen. Sound effects are drowned out by the music. On higher difficulties, time extensions are unbalanced, making specific track sections brutal. The reverse view unnecessarily rotates the camera, when an instant switch would be more suitable at high speed. Drafting is inconsistent; leaving a draft slows you down almost immediately. Certain tracks don’t feel “lived in”; urban circuits don’t look like they’re created from real-life roads. 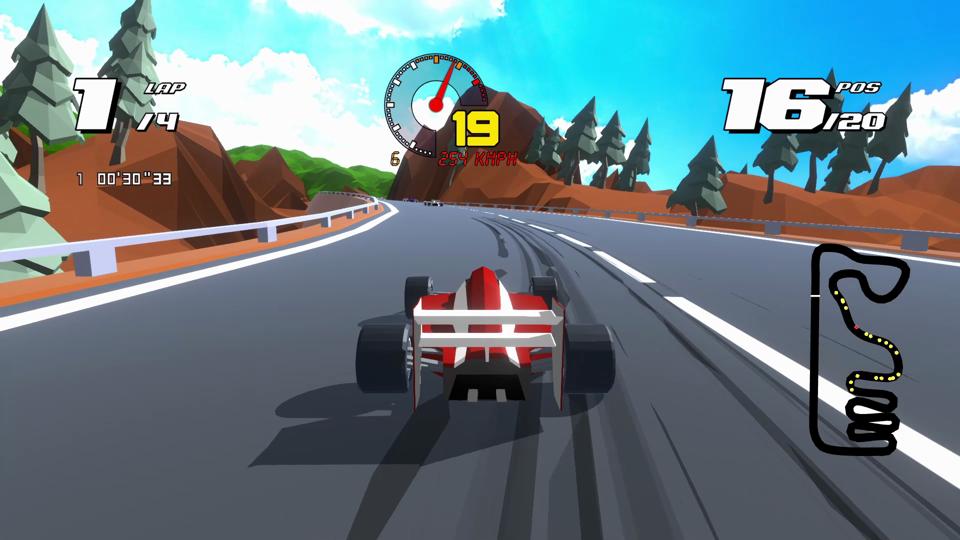 But none of these issues are anything more than finicky; much like those classic racers of old, they either don’t truly matter, or become part of the overall experience. You learn to overcome them, or die trying; that’s what makes Formula Retro Racing so addictive.

The game may only get better, too. Jeffreys is actively looking to refine the game based on feedback, and is looking into the possibilities of replay functionality and split-screen multiplayer over the coming months, as well as potential new game modes.

Whether these come to fruition or not, Formula Retro Racing is absolutely worth the $11.99 price tag, especially for those retrophiles who love a bit of punishment. It says a lot that such a simple game makes me question my own contributions to society; it’s fantastic to know that one person is responsible for something so simple, visually appealing and frustratingly addictive.

Disclaimer: I was provided with a copy of Formula Retro Racing in exchange for a fair and honest review.

How To Watch UFC On ESPN 9 Prelims