Breaking
NBA-Backed Saliva Coronavirus Test Gets Emergency FDA Authorization
The Amazing High-Yield REIT Strategy For 7.9% Dividends,...
How To Attract Candidates To Hard-To-Fill Positions
Trump: I’m ‘Ready’ To Take Action On Stimulus...
Apple iOS 13.6.1 Release: Should You Upgrade?
Non-PPP Loan Approvals Continue Slow But Steady Rebound
Here’s How To Stay One Step Ahead Of...
Microsoft Outlook Will Store Contacts’ Blood Group And...
How The US Department Of Health & Human...
Why Do Chinese Companies List Their Shares In...
Can You Get Covid-19 Coronavirus From Food? Frozen...
Winklevoss Twins Tell Bar Stool’s Dave Portnoy To...
How Democrats And Republicans Would Tackle The Enduring...
Berkshire Hathaway Doubles Down On Net Lease REIT,...
70% Of Americans: Ban Foreign Apps
This Week In Credit Card News: Pandemic Brings...
Home Technology Review: ‘Gang Beasts’ Gives Festive, Frustrating Family Fun On A Budget
Technology 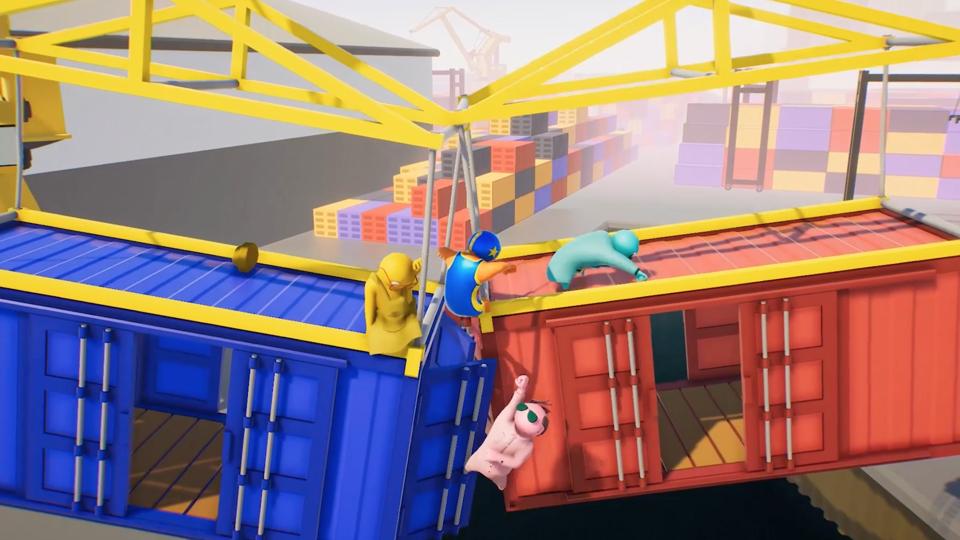 ‘Gang Beasts’ has finally been given a physical release on Xbox One and PS4 in time for the … [+] holidays.

Move over, Monopoly: there’s a new game on shelves this Christmas that’s ready to take the crown as “four-player game most likely to make you fall out with your friends and family”. Gang Beasts is here, and it’s happy to help you burn those personal bridges.

It may strike many gamers as a little late to review Gang Beasts, considering it was digitally released on PC and PS4 in late 2017 and received a port to Xbox One in March. However, Skybound Games has finally given it a physical release for Xbox One and PS4 ahead of Christmas. In all honesty, it might be the perfect gaming gift for the holiday season.

However, that’s not to say it’s a perfect game in itself.

What it’s all about

Gang Beasts is a multiplayer-focused game that in no way takes itself seriously, and that’s clear as soon as you’re dumped into the “Meatropolis” district of Beef City to beat the hell out of fellow vaguely anthropomorphic wobbly blobs. Or play soccer with them – while again beating the hell out of them.

You’re able to customize your character with colors and odd costumes before choosing your arena to fight in: in a subway, the top of a blimp, around an incinerator, across a large sausage dump and more. Here, you use an easy-ish to learn, relatively impossible-to-master control system to grab, punch, kick, drag and throw your competitors into anything from flaming pits or the open sky, right through to full-speed trains and concrete floors.

The one thing that works both for and against Gang Beasts is its controls. Put simply, they aren’t great, dependable or accurate, but this lack of clinical combat only adds to the silliness of the experience. Fighting looks more like bumbling; think less Super Smash Bros. and more the Bridget Jones’s Diary fight between Colin Firth and Hugh Grant.

However, when things do come together as you hope, there’s no thrill like it.

The grab mechanic also acts as your means of punching, depending on holding or tapping; neither move is particularly accurate. However, when you manage to grab someone and repeatedly punch them in the face until you knock them out, it feels beautiful, not least because connecting your hits is hard labor when your opponent is struggling in your grip. 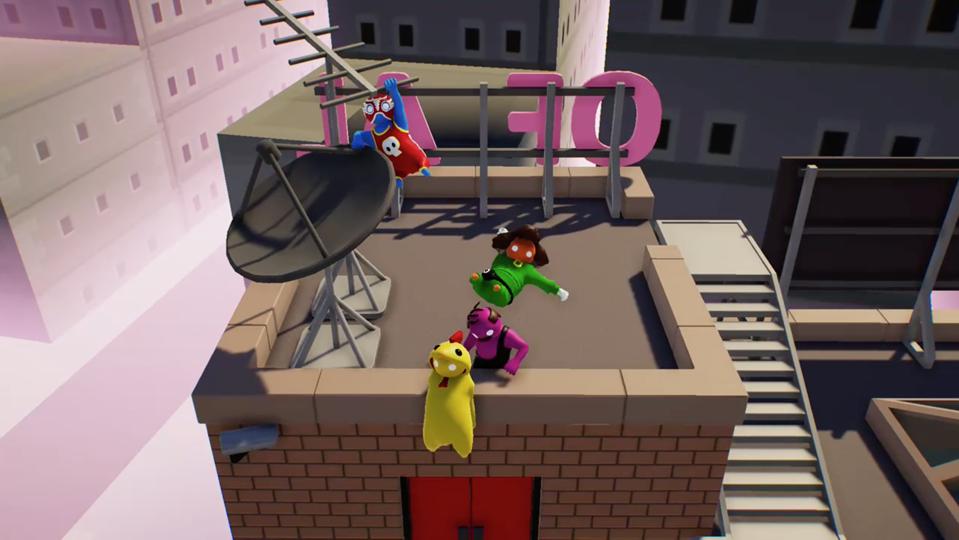 Bouts in ‘Gang Beasts’ will almost immediately descend into madness.

Similarly, landing a nice, clean headbutt at the beginning of a round is a game of luck, but when you manage to nail it, it feels more powerful than the magnum from the original Halo. Again, this’ll knock an opponent out for a short period of time, and that’s when the main mechanic of the game comes into play.

Throwing is one of the most difficult things to do in Gang Beasts: presuming your enemy is unconscious, distracted or having a hard time with the controls, you can pick them up and, using your momentum, let go at the right time and have them plummet to their death. Despite the luck often required to get this right, it feels incredible when you finally do it. But most of the time, the fight’s not over.

Holding on for dear life

Grab isn’t just for fighting–it’s for saving your skin. It makes the game so much more exciting when you know that falling over an edge isn’t game over, so long as you’re capable of clutching a wall, bar or railing on your way out. Sometimes, as I found here in a wholly luck-based one-on-one victory, the seeming champion can often become the loser in a heartbeat.

With a game that’s this gloriously unpolished, there are bound to be issues. Some are part of the fabric and make things funnier, like hitboxes that are frightfully inconsistent, or a climbing mechanic that’s more chance than skill. 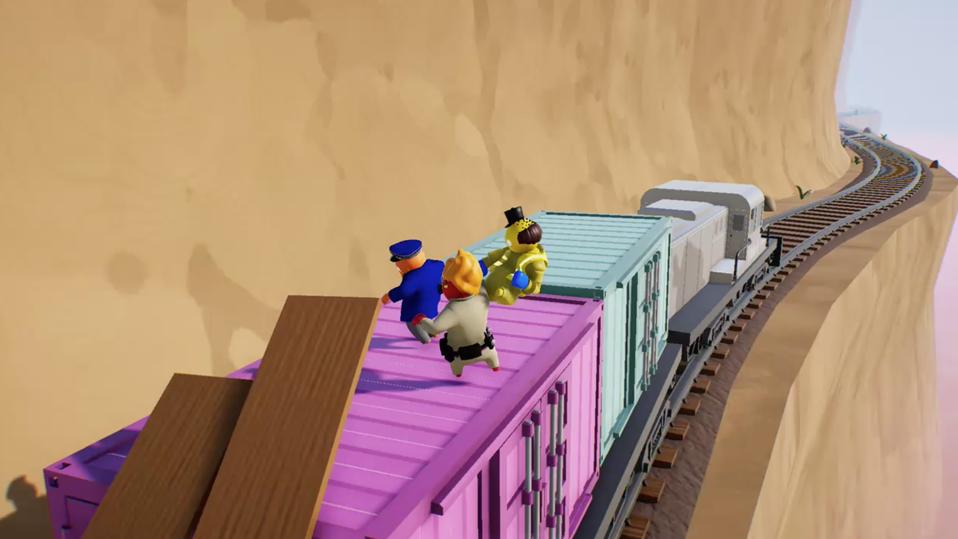 Some levels can be more complex than others, but you’ll always be focused on pummelling the … [+] opposition.

Still, there are actual problems that affect the overall running of the game. It’s not great to get hit by a train so hard that your character’s head clips through a wall and your body flails on the other side, forcing you to restart the bout. You can get stuck out of camera view every now and again. The graphics are inconsistent and pretty lo-fi to begin with; combined with frame-rate drops when the action’s high, it can look and act like a last-gen effort on low PC settings.

In terms of UI, Gang Beasts isn’t the slickest. There are problems when setting up a local multiplayer game on console; after various approaches to logging in, selecting game modes and having other controllers interacting with the screen, we eventually got four players playing on it. Don’t ask me how; it’s still a mystery, and I’m not looking forward to guessing again.

Meanwhile, the action itself, which is often over in seconds due to operator error or a strong start from your enemies, can be heavily stunted by inter-round loading screens that often feel longer than the battles. Most similar fighting games don’t have these, especially when the arenas are as small as they are. 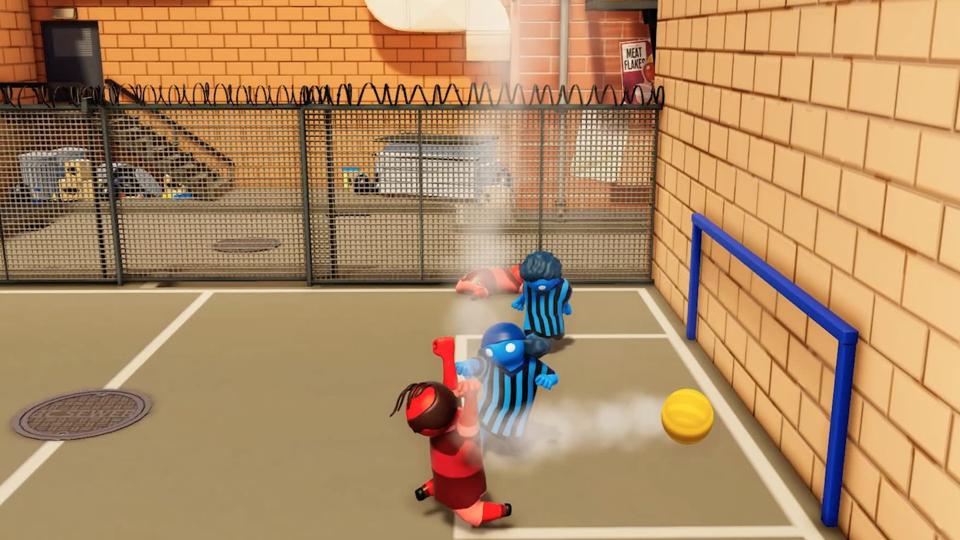 The soccer minigame alone may be worth the money for some.

Still, these quibbles are all worth putting up with for the wider experience. Like Jalopy, it feels like these usually infuriating elements only enhance the experience.

A gamble worth taking for the holidays

For every frustration or problem with Gang Beasts, there are always twice as many opportunities to be elated by it. For all its faults, it’s one of the best opportunities to get four people of all around the TV for hilarious, manic fun, even if it’s just for an hour or two.

And for around $25 for a physical copy (or even $16 for a digital copy, if you’re buying for yourself), you’ll easily get a very decent return on investment in just a few hours with family and friends over the holidays. As stocking fillers go, it’s one of the better options to close out 2019.

Disclaimer: I was provided with a review copy of Gang Beasts in exchange for a fair and honest review.

How Significant Is Chevron’s $10 Billion Impairment?