Home Technology Review: Is The Console Port Of ‘Two-Point Hospital’ Worth The Wait?
Technology

Review: Is The Console Port Of ‘Two-Point Hospital’ Worth The Wait? 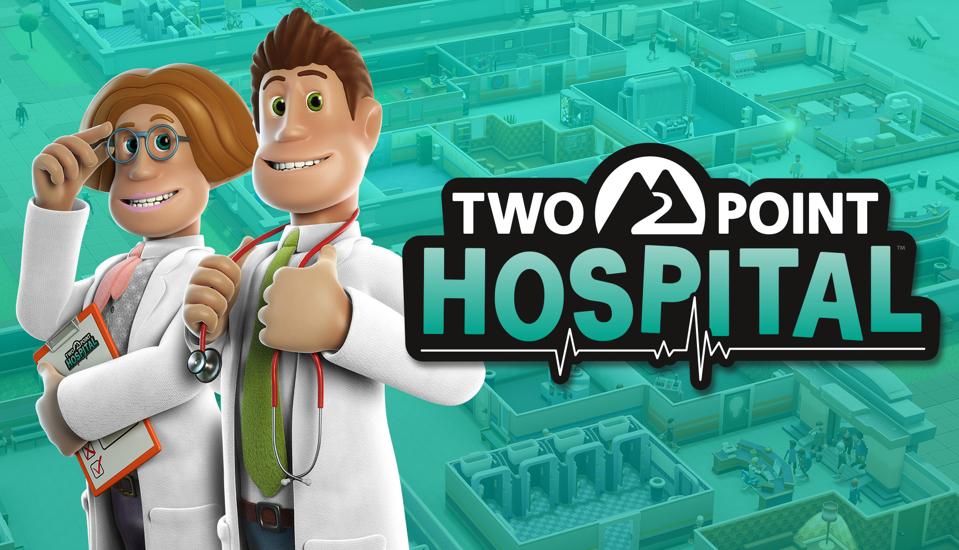 ‘Two Point Hospital’ is now available on Xbox One, PlayStation 4 and Nintendo Switch.

After 18 months of justified popularity on PC, Two Point Hospital has finally made the leap to consoles. What’s more, it’s a good time to be in the Microsoft ecosystem: while PlayStation 4 and Nintendo Switch owners have to pony up cash to play it, it’s been “free” via Game Pass since launch, making it all the easier for Xbox One owners to seize this temporary opportunity to try this spiritual successor to the incredible Theme Hospital.

Truth is, even if Two Point Hospital wasn’t made available via subscription, I’d still tell Xbox players to buy it outright. This console port of an already celebrated game is unbelievably fun to play–and it’s the most intuitive port of a keyboard-and-mouse-based title I think I’ve ever played.

Anyone who tried the often-frustrating console ports of Command & Conquer 3 and Red Alert 3 will know the pains of having to essentially relearn a game’s strategy because of a controller, to the degree you may not be able to rely on your playing style on PC. Thankfully, this isn’t the case with Two Point Hospital.

As someone who’s enjoyed Two Point Hospital on my laptop for a good year or so, it feels a bit late–and disingenuous–to give a full review of a game I’ve enjoyed for a long time. Instead, here’s a quicker take on the positives and negatives of the title if you’re someone carrying over previous experience to your console of choice, or a newbie who’s playing the game away from PC.

Not the smoothest start, but don’t be put off

One of the more immediately jarring worries of the Two Point Hospital experience is the game’s juddering start. Even on Xbox One X, the game’s menus and initial video introduction stutter throughout; a case of poor optimization, for sure. Luckily, this ultimately gives way to smooth, uninterrupted gameplay. This learning curve can feel overwhelming at first, but the game’s tutorial cleverly puts that to bed.

At first, I really hated the control scheme. The overreliance on LB/L1 and RB/R1, the use of Y/Triangle to complete a room, and the additional menu layers you need to go through to just drag and drop an item seem unnecessary, but once you get into the flow of things, you begin to realize that everything is there for a reason; after all, drag and drop is not an option without a mouse. 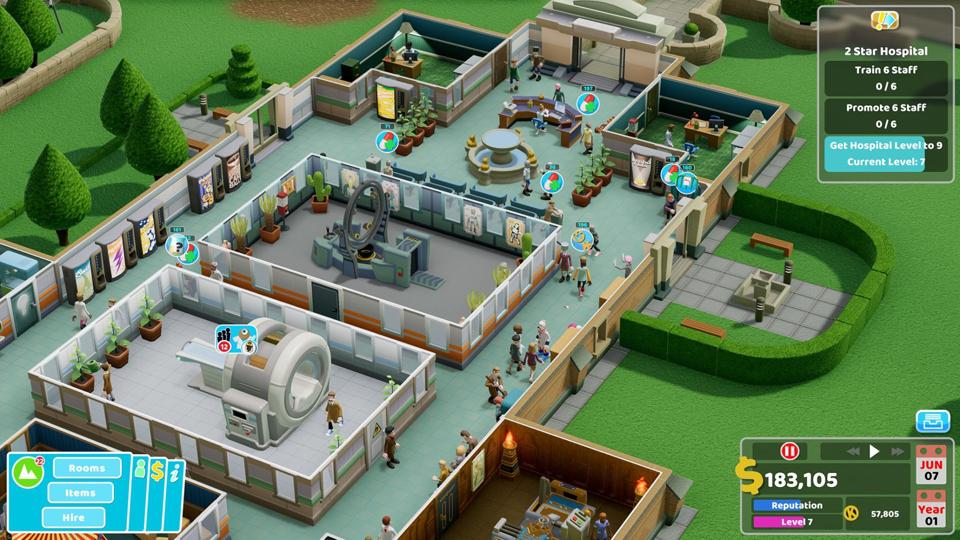 Your hospital takes shape quickly, as does your endless list of tasks.

This is supported by an optional system of grid and angle snapping for furniture, machines and incidental items, which combines nicely with a controller to make things even easier to place and control. There are still some occasional gripes–for example, I never quite figured out how to resize a room after accidentally making it a 1×1 square, meaning I’d have to delete and start again–but they were the least of my concerns once the core gameplay kicked in, not least because of the way you can control time in order to catch your breath or fix a mistake.

Enjoy at your own pace

In games like these, I can flap under pressure–especially on console. That’s not something I’m necessarily proud of, but I know plenty of people are in the same boat. That’s where Two Point Hospital’s four-stage speed options, mapped to the analog sticks, are incredibly handy. You can pause, slow, play or fast-forward the goings-on of the hospital, and you’ll learn to manage when to change time in your favor. It takes some getting right, but once you nail it, it’s a superb mechanic.

Of course, the only way you can make enough money to afford ongoing purchases and investments is to let the game resume–frozen people can’t pay their medical bills, after all–which is where the natural balance is restored, and you realize you can’t just live in a state of timelessness forever.

The biggest real criticism I have of Two Point Hospital is about the way the game can feel overwhelming, but it’s a double-edged sword. Firstly, it’s impossible to stop bad things happening. It genuinely feels awful when someone randomly dies in your hospital; for my first, it was due to boredom, presumably due to a lack of leaflet stands. I mean, that was a preventable death right there. Once you experience death, you’ll find yourself spiraling into bureaucracy, getting more staff in, improving the surroundings and slowing things down to keep an eagle eye on those in the hospital. 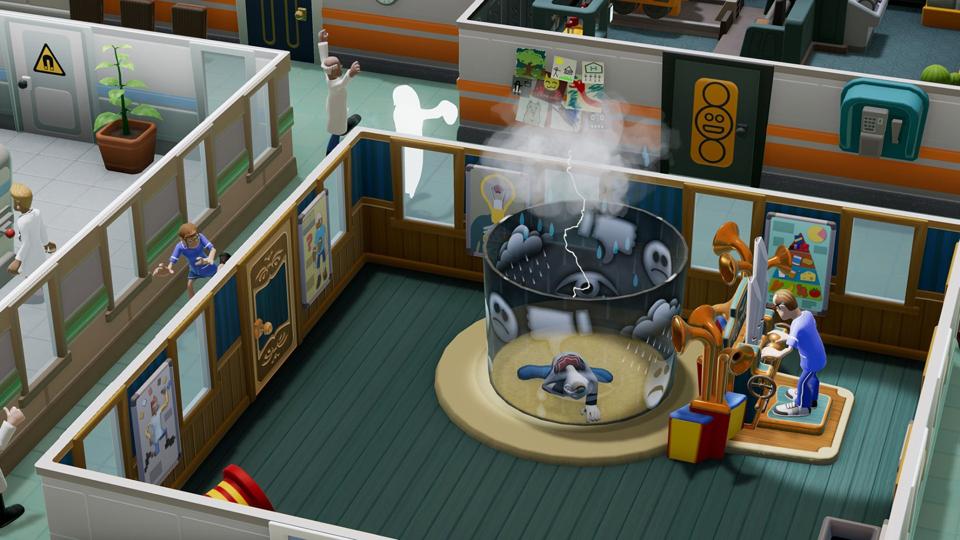 There’s always something going on in ‘Two Point Hospital’ – sometimes, you just need to look a … [+] little closer.

Yet then, if your budget gets low and you have too many staff doing nothing, you’ll need to fire someone to balance the books. Youll rifle through your staff list, pick the lackadaisical janitor to sack, but they’ll give you a line about how it’ll have a knock-on effect on his family, life, career and marriage. Even with a comedy spin, it’ll still hurt. You may be HR, but you’re still human.

You may still let them go, but then you’ll find yourself redoubling your efforts during the hiring process. You might hire fewer people just so you don’t have to sack them. Then patients die due to half your meager crew putting their feet up in the staff room. The cycle continues. It’s a surprisingly complex and bleak desire to save every life in a game that forces you to realize that you can’t. Luckily, the wider tone of the game stops this doom from becoming more pervasive.

From the ridiculous ailments–Mock Star, Denim Genes and Pudding Blood being my personal favorites–through to the well-researched, relevant jokes throughout (e.g. an early mission is aptly named after one of the best episodes of It’s Always Sunny in Philadelphia), Two Point Hospital is genuinely funny, and it constantly raises the bar. 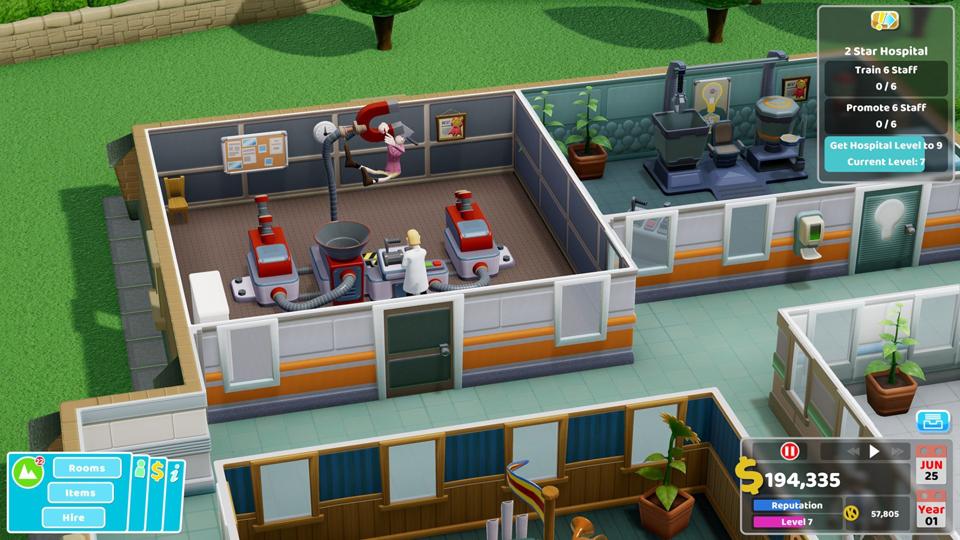 There’s a lot to be said for the “Pan-Demic” illness, too.

It’s easy for games like this to feel wacky for the sake of it, but the undercurrent of stress provided by the game is never overpowered by the humor, nor does the inherent anxiety of managing a hospital ever feel too burdensome because of its playful support.

Medicine for the Overcooked generation

The biggest takeaway of Two Point Hospital’s console release is that it’s perfect for so many playstyles despite the lack of keyboard and mouse–something the likes of the C&C series never managed to achieve on the Xbox 360 and PS3. Developers at Two Point have clearly spent the last 18 months doing more than simply porting the game; a lot of energy has been put into making it work well on three new platforms.

Whether you’re looking to curate a perfect-looking hospital, make as much money as possible, sweep the awards ceremonies or get every star in the game, it’s brilliantly tailored to a twin-stick layout. Of course, it does take real skill to succeed at the highest levels and get those top scores, but like Overcooked, you’ll fail and you will learn from your mistakes. Luckily, most of the time, you’ll scrape through by meeting the minimum requirements–but you’ll keep going back to each hospital to shape, improve and perfect your efforts.

I honestly didn’t think I’d like Two Point Hospital on console as much as I do. If you have Game Pass, downloading and playing it is a no brainer. If you’ve got $40 to spare for a game, you won’t get much better value and replayability from anything else released so far this year.

Disclaimer: I was provided with a copy of Two-Point Hospital in exchange for a fair and honest review.

Why SMBs Are Wising-Up To Cybercrime

A ‘Memorial Day’ Moon, A Spaceship And ‘Manhattanhenge’:...

Is Apple At Its Core A Media Company?...