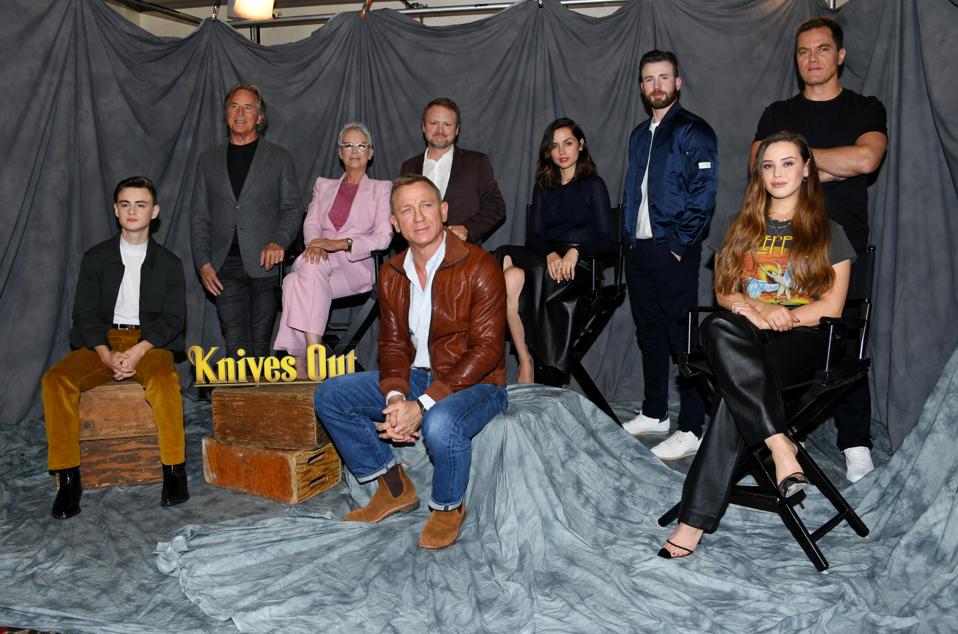 Johnson’s Knives Out is tearing up theaters, a strong showing for a clever and well constructed whodunnit. Tight plotting, fun performances (the entire cast seems to be having the time of their lives), and great writing combine here for what is honestly one of my favorite films this year. I highly, highly recommend you see it in theaters, with an audience, and before any of it is spoiled for you.

The Thrombeys are a very wealthy family. Their patriarch, crime novelist Harlan Thrombey, invites them all to his 85th birthday party taking place within his remote mansion. Sometimes 85th birthdays are final ones, and Harlan is found dead the next morning in his upstairs study. Renowned private investigator Benoit Blanc (a top-tier and charismatic Daniel Craig) is called in by a mysterious benefactor to assist the investigation, and the script rolls on from there. I’d say more but the last thing you need is spoilers.

Every performance shines here. Toni Collette’s Joni is great as a half-outsider ‘influencer’ who married into the family before her husband became her deceased ex-husband. Jamie Lee Curtis’s Linda Drysdale, Harlan’s successful and no-nonsense daughter, has a strong presence in every scene she is in (and can be in every film as far as I am concerned). Michael Shannon’s Walt, Harlan’s youngest son and the CEO of Harlan’s publishing company, excels as exactly that kind of conniving character who seems to want to THINK he’s a good person while he maneuvers on full display.

Chris Evans, playing Harlan’s grandson Hugh, practically bleeds in-your-face charisma and belligerence. He has long been a sort of black sheep in the family, and has long learned to stop caring and enjoy the ride. Ana de Armas’s Marta is complex, sweet, smart nurse, the caretaker for Harlan, and provides a strong emotional center for the film as a source of goodness juxtaposed against the family’s perpetual self interested ways. And as noted before, Craig’s Blanc is a fantastic character that I would gladly watch again-as much as I love Craig as 007 I’ll be unable to avoid wishing his next Bond outing was a Blanc outing. All the characters shine in a well balanced script.

The script is complex without being overcomplicated, with well constructed twists as a good whodunit should have, and while the genre can sometimes lose emotional development in favor of mystery the balance here is admirable. The production design needs noted here as well: the house is a massive, perfect set-piece with details woven into every inch of its colorful frame. Murder mysteries can live and die by the ingenuity of the surroundings, a fact that Johnson takes full advantage of.

Perhaps the bottom line is this: every minute of this film is fun. Johnson wrote and directed a film in a genre he loves, and his enjoyment of every minute of it was palpable. The whole cast loved being in it, I loved seeing it, and the theatergoers I saw it with were enamored by all accounts. Perhaps the only person who didn’t walk away a winner was Harlan, but that would be an admittedly tall order for a deceased octogenarian mystery novelist. Do yourself a favor and watch Knives Out, and keep your wits about you. You won’t want to miss a thing.

Black Friday For A Good Cause: ‘Giving Tuesday’ Raised 400 Million In 2018

What Will Next Year Bring? Here’s A Bold...