Breaking
The Impact of Internships in Marketing
3 use cases of chatbots for critical services
How To Make Working From Home Appeal To...
Tips on How to Design an Office Space...
4 Tips To Help Build Amazing Customer Relationships
How Are US Pension Funds Responding to the...
Benefits of second-hand cars for your business
4 Reasons Why Your App Needs To Undergo...
Your Guide to Online Marketing
How to find a Solicitor in London
5 car tyre and safety tips for a...
Everything You Need to Know About Corporate Social...
Is Adaptive Leadership the Key to Motivating Employees?
Why business events are set to return with...
Business events set to return with a bang!
Expanding Internationally: 5 Things to Consider for eCommerce...
Home Business Review: Netflix’s ‘Tiger King’ Is An Unmissable, Ugly Portrait Of Humanity
Business 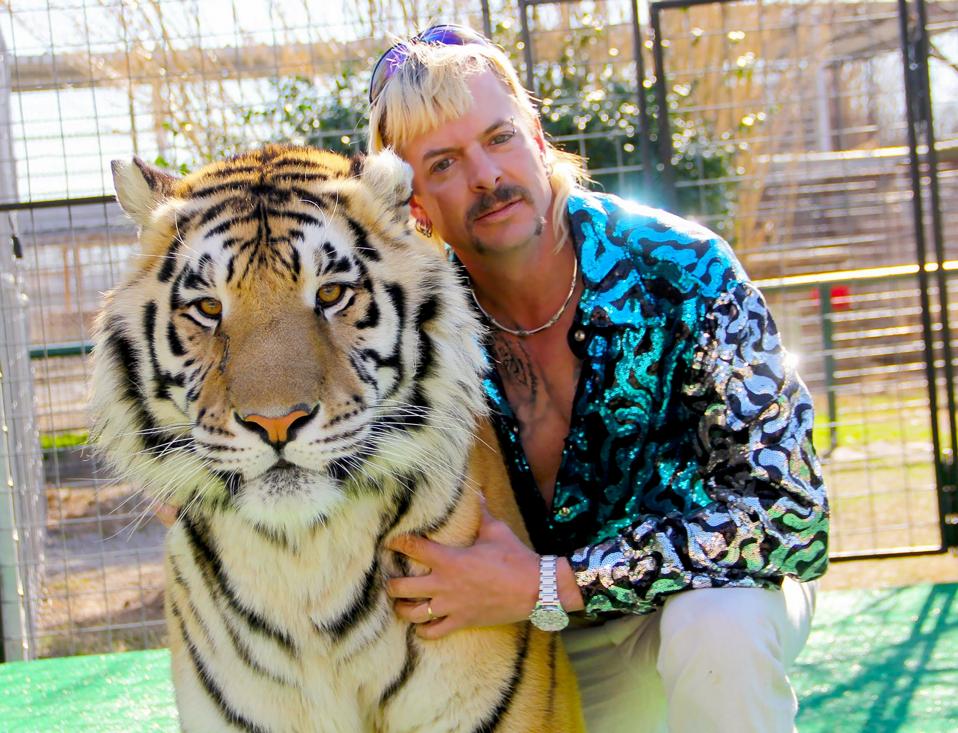 The titular Tiger King, in all his glory.

I had no idea there was such a demand for pets who can rip a person’s face off – what would possibly possess anyone to cage these beautiful creatures?

The series follows “Joe Exotic,” titular Tiger King of Florida, a man who comes across as a caricature of a hillbilly, practically pulsating with charisma, with an extraordinary ability to manipulate the young and vulnerable.

Joe is deeply narcissistic, eccentric, and sociopathically self-confident, making him the ideal candidate for reality TV, quickly recognized by producer Rick Kirkham, who agrees to shoot Joe’s self-promoting internet series in exchange for creating a reality TV show. Naturally, there’s no shortage of cameras available to capture this strange story, told from a variety of viewpoints, some perceptive, others deceptive and deluded.

The series takes a delirious dive into the dark heart of America, where the pursuit of power and profit has led to the complete subjugation of the natural world, an alternate reality run by criminals and lunatics. As Kirkham states, possession of big cats is all about power, bestowing the Tiger King with a strange kind of authority over man and beast.

This story is sparked by a feud, between Carole Baskin, big cat conservationist, and Joe Exotic, big cat breeder and dealer. Carole claims that Joe is mistreating his animals (he certainly is), while Joe furiously fires back, claiming that Carole killed her husband (it certainly looks like it), and the feud escalates wildly from there, taking twists and turns that outpaces the strangest of fiction.

There’s something incredibly timely about this series. First, is the strange resemblance of the central feud to the bitter 2016 battle between Donald Trump and Hillary Clinton, a war between a fiery egomaniac and a cold, calculating strategist.

Beyond that amusing, superficial similarity, there’s a deep examination of the warped values that have led society down a bad path. Dodgy power dynamics and exploitation are on full display, along with the corrosive, poisonous influence of wealth, and anger.

The exotic animal market is absolutely saturated with corruption (and inextricably tied to organised crime), the big cats viewed as mere commodities, their welfare an afterthought. Stunning shots of yawning lions and colorful tigers make great transition shots between interviews, and serve as a tragic reminder of the complete lack of respect afforded to these magnificent animals.

Occasionally, the keepers are shown losing control, and suffering terrible consequences; these creatures are formidable predators, not playthings.

Baby tigers are passed around as props for selfies, even serving as a cheap attraction to local malls, before they grow big enough to maim a man – the fact that any of this is legal is simply extraordinary.

Beyond the tragic existence of the big cats, the series shines a light on the corrupting influence of money, and how a simple feud can spiral out of control, until the burning desire for revenge turns pathological, an all-consuming fire that destroys everything in its wake.

Joe’s rabid, hyper-defensive reaction to Carole’s protests quickly mutates into something else entirely; as the story unfolds, it’s clear that this isn’t a tale of heroes and villains, but of deeply flawed individuals, all varying degrees of dreadful.

Tiger King paints an unflattering portrait of humanity (although many of the zookeepers are good people, dedicated to the welfare of the animals). It’s a deeply compelling story that reflects some of the strangest aspects of our age.

Most of all, it’s a story of cages, stacked in a twisted hierarchy, some of the inhabitants having entered willingly, before the door slammed shut behind them.

10 Tips To Successfully Manage Up In A Virtual World