Breaking
How The US Department Of Health & Human...
Why Do Chinese Companies List Their Shares In...
Can You Get Covid-19 Coronavirus From Food? Frozen...
Winklevoss Twins Tell Bar Stool’s Dave Portnoy To...
Berkshire Hathaway Doubles Down On Net Lease REIT,...
70% Of Americans: Ban Foreign Apps
This Week In Credit Card News: Pandemic Brings...
Three ‘Big Impact’ Surprises That Could Slam Stocks,...
Quantum Computing: What Does It Mean For AI...
5 Questions With Jonathan ‘Magar’ Martinez Cannabis Curing...
5 Concise Questions With Jonathan “Magar” Martinez Cannabis...
Lessons From The Frontlines: Preparing A Global Vaccine...
Behind The Curtain—Chapter 11 From The Inside—Chapter 4—First...
What To Look For In A Nursing Home...
Apple’s Radical iPhone 12 Upgrade Suddenly Confirmed
5 TikTok Growth Hacks You Need To Know
Home Technology Review: ‘Overpass’ Has Underdog Charm, Despite A Few Obstacles
Technology

Review: ‘Overpass’ Has Underdog Charm, Despite A Few Obstacles 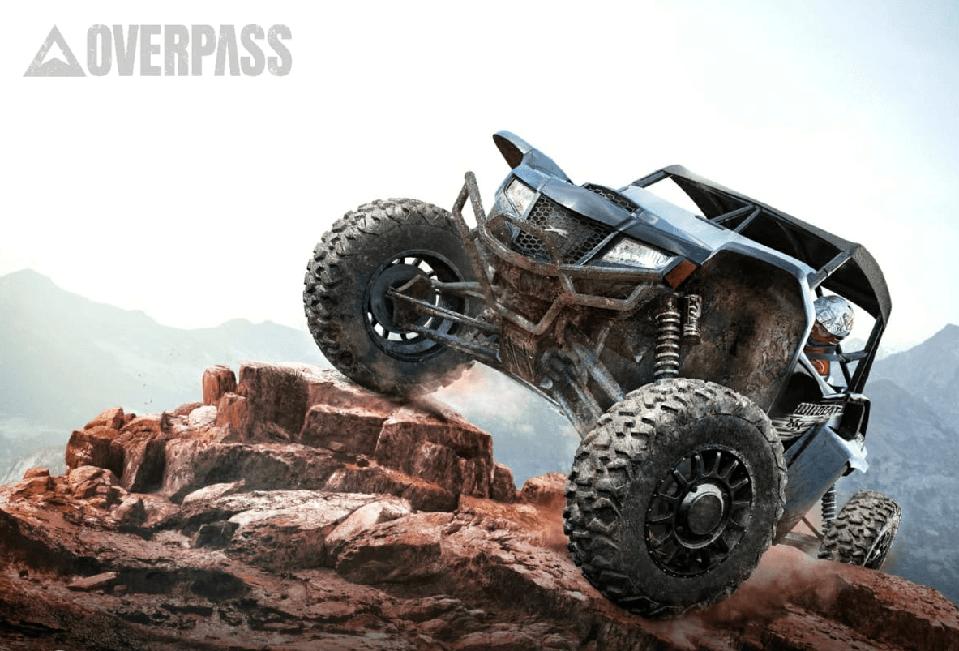 I like Overpass, and my appreciation for it grows as I play it more, but the reasons I enjoy it aren’t ones I expected from the outset. On one hand, it’s genuinely fun and it’s like nothing else I’ve played; on the other, it doesn’t deliver in the ways I expected it to, which I reckon will cause problems for those who’ve seen the game’s trailers and promotional materials and expect a game that’s a mix of WRC, Spintires: Mudrunner and Trials Rising. It’s not.

What it is, though, is a game of extremes: one with definitive pros and cons.

A wealth of well-designed, realistic courses

Overpass doesn’t inflict that horror of 90s gaming, forcing you through career mode to unlock tracks and vehicles. From the start, everything’s available through “quick race” mode, giving you a whopping 43 stages across six varied locations, with experiences ranging from one-minute hillclimbs to eight-minute obstacle course, if done well. Intriguingly, they’re all only “beginner” or “intermediate” difficulty, but these labels misrepresent the backbreaking situations you regularly come up against.

What’s more, there’s insane attention to detail in the design of each stage, offering several different routes you can take. The obstacle-course stages, in particular, are great for this; you’ll often find yourself struggling on the first lap, making a better go of it on the second, then absolutely nailing the section on the third. You learn as you go, getting regular moments of satisfaction. 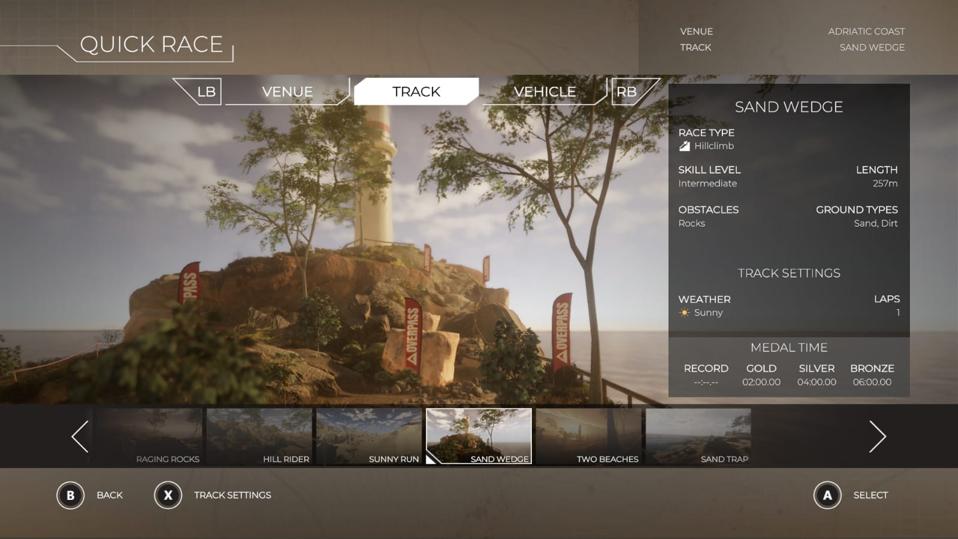 There’s no shortage of levels in ‘Overpass’.

Each one also offers medals for times–I can definitely see myself trying for gold in each one, even if I can barely get bronze in hillclimbs.

Hillclimbs are a real game of strategy

I’m happy to admit I’m awful at hillclimbing races, but it’s a mode that requires as much, if not more, strategy than driving ability. It’s in this mode that Overpass gets its most technical, and you have to rely on the differential system, which is thankfully simple and intuitive.

It’s this format you’ll get the most thrills from, not least because most of these stages can be over in a matter of a minute or two (for me, four or five) and you always feel the pressure of the clock. It only takes a minor error to make you miss out on success, but you’ll see yourself regularly restarting and finessing your run.

ATV levels are a tough challenge

Buggies are more my bag than ATVs, but only because ATV levels ramp up the tension through your largely unprotected rider. You can flip a buggy and hope you roll over entirely to land on your wheels, but the same can’t be said for simply driving your rider shoulder-first into a jagged rock, which causes them to apparently die. ATVs add a whole additional level of care and attention, and the mode genuinely reflects the fear you’ll have had if you’ve ever driven a quad bike yourself. 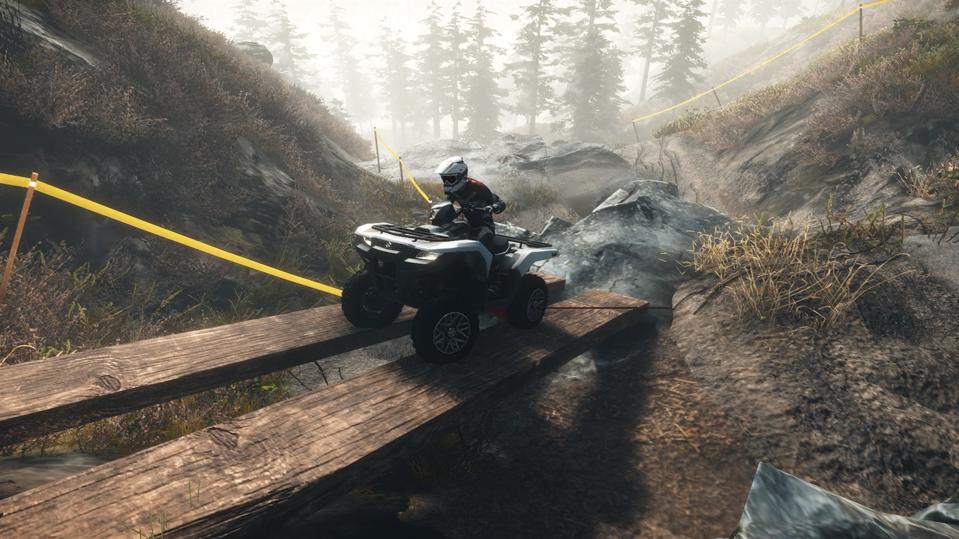 The ATVs provide the best challenge in the game.

Licensing is on point

Although it doesn’t look like the type of game to require licensing, Overpass gives you get access to vehicles from Arctic Cat, Polaris, Suzuki and Yamaha. They all feel different, too; you’ll soon discover a favorite, and it’s not a simple case of getting the fastest or most nimble–you can definitely feel the balance between different strengths and weaknesses, even in the lower-powered buggies and quads.

Not as technical as it makes out

In my book, Overpass isn’t a simulation racer. It feels like a Forza Motosport-level sim-lite game with bonus terrain negotiation. It’s not a bad thing per se, but chances are that you’ll be let down if you want something really technical. In truth, you learn the only two or three things you need to know through the tutorial that introduces career mode.

A strong, patient combination of throttle and planning will get you through most jams without having to change your differential or approach, especially on the obstacle courses. Gravity is unpredictable, just like it was before Isaac Newton discovered it: going up a wooden seesaw often feels so much heavier than a standard rocky bank of a lesser incline. All the while, mud, water and grass regularly seem to have no discernible effect on the way you drive.

The most jarring thing about Overpass is its graphics. They’re serviceable and by no means bleeding edge, but the game suffers from rampant screen tearing, often juddering with just the slightest turn. Given you have to constantly focus on both your vehicle and the road ahead, it’s all the more obvious. It doesn’t help that the motion blur on the wheels looks previous-gen, and by god, you’ll see those front tires spin a lot. 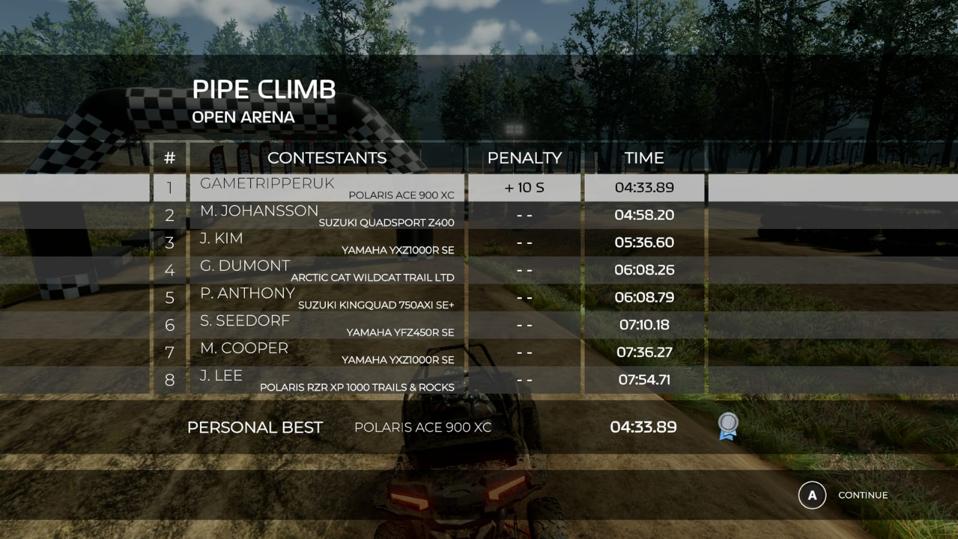 Even with a poor run, you often find yourself killing the competition.

Both oversteer and understeer are a real menace in Overpass, but I couldn’t tell you for the life of me when it kicks in because it can be so unpredictable. It can even make driving in a straight line a chore, as you adjust your driving line only to see your vehicle drastically jerk. On the other hand, the handbrake often becomes a necessity in any turn sharper than 90 degrees, because your buggy or ATV just doesn’t respond.

While career mode isn’t negative overall, there’s a real lack of balance that makes it feel unfulfilling. I enjoy the simplicity of it: each season comprises 12 rounds of your choice, with standings and management in between. It’s varied and fun, and the two-tiered table system seems fair.

But WRC it is not. Firstly, the competition’s really poor. In some races, I cruised to victory by minutes (even after just a four-minute run) even though I’d been penalized for missing obstacles, or went full Bill Murray in Groundhog Day by ditching my buggy into a quarry. Twice. You don’t know how successful you are until the end of the race either, as there are no split times available on a lap-to-lap basis.

Then there’s the lack of customization. Your driver can be male or female, and that’s where the rider’s physical options stop (bad luck if you’re not Caucasian). You can get helmets and overalls but there’s only a handful available. When it comes to your rides, each vehicle is upgraded individually, using a limited, Wreckfest-style vehicle upgrade and livery system. But there’s no tweaking to your playstyle; you just get a slightly better engine, or exhaust. 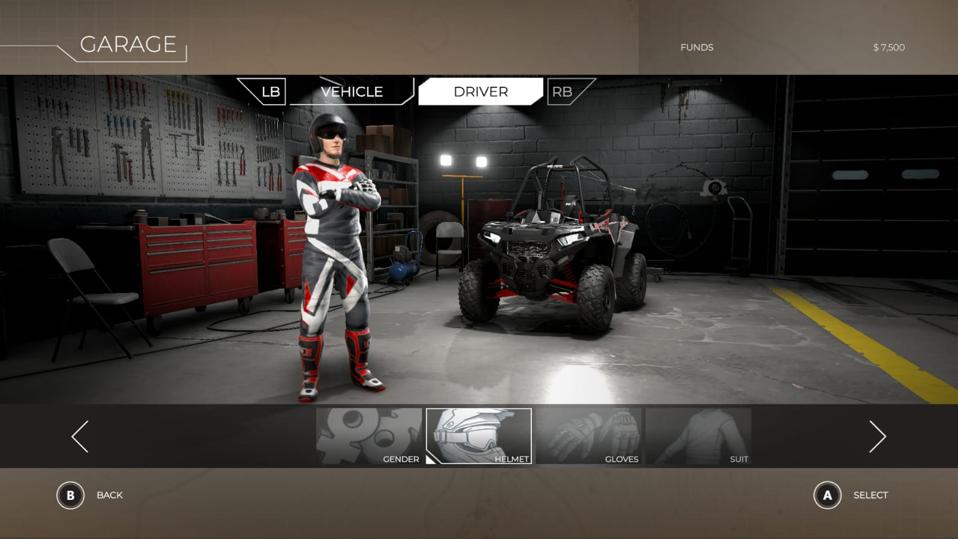 The vehicle and driver options are a bit of a letdown.

I know that offroad vehicles sound closer to hairdryers than Camaros, but the sheer monotony of this key sound effect, in tandem with a strange filter effect that often makes it sound like the engine’s been plugged with cotton wool, often makes those steady hillclimbs unbearable. You might well find yourself easing off the gas just to gain some aural respite, even if it sees your rider falling sideways off a cliff.

The sad thing is that Overpass has a well-curated soundtrack; it doesn’t go the Wreckfest route of pairing itself with an unsuitable genre, instead settling for a playlist that wouldn’t be out of place in EA’s NHL franchise. But there’s no in-race music–just pitchy revs.

Overpass is rough around the edges, but it’s still got a lot to offer. Is it worth $50? No, unless you’re really into this type of racing. But that’s not to say you wouldn’t potentially get your money’s worth if you got hooked, especially on its more challenging hillclimbs.

If there’s one thing true about the outset comparison to the WRC franchise, it’s that it’ll take one or two more sequels to refine it into an offering worth top dollar. I’d love to see what Overpass 2 could bring, and hopefully this’ll be a stepping stone to something much more comprehensive, refined and, hopefully, difficult.

Overpass is out today (February 27) on Xbox One, PS4 and PC, and is coming to the Switch on March 12.

Disclaimer: I was provided with a copy of Overpass in exchange for a fair and honest review.