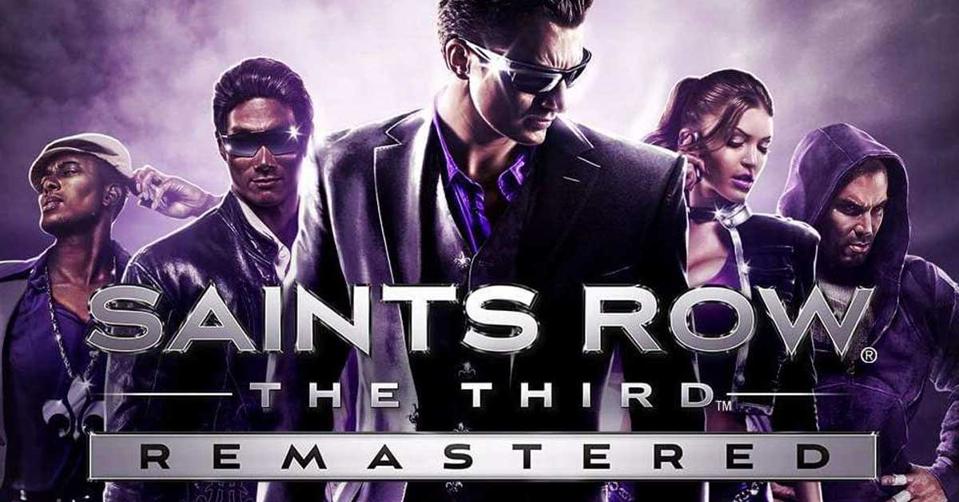 Saints Row the Third Remastered is out today (May 22).

I discovered it by chance. Grand Theft Auto IV felt lackluster, and I wanted an open-world action-adventure game that was exciting, fun, and easy to play. An impulse, second-hand purchase of SR3 led to a 30-hour weekend session that only stopped when the story did, and I still don’t regret a second of it. I can’t recommend that nine-year-old game highly enough, and there’s no point in reviewing the source material from scratch; it got a solid 84 on Metacritic for good reason.

Now, I’m in my mid-30s and a lot less impressionable than I once was, but Saints Row the Third is still one of my ten favorite games of all time. But I’m sad to say, fellow Saints, that much like me, the game hasn’t aged as well as hoped. Luckily–and also like me–the game can still be great company, even if it’s crass and doesn’t work as well as it used to.

I plowed 24 hours into Saints Row the Third Remastered, clearing the core game with 93% completion and smashing through 27 of the 40+ challenges–and I bloody loved it, for the most part. I don’t know how much of this is to do with it being my first time playing it since that halcyon weekend nine years ago.

So, first things first: this remastered outing is the same game as Saints Row the Third, but with a lick of 4K paint and all the DLC included. None of the original game’s low-level annoyances have been changed; don’t expect fast travel or the ability to bulk-buy ammo. The real focus, given its promos, is on those graphics.

Saints Row the Third Remastered has been plugging its new lighting system since the day the updated game was announced. Despite some genuinely impressive moments–the reflective water effects and sunsets in particular–it can be terrible on a very base level.

Even after you set the standard “change brightness until the logo is barely visible” settings, the white/black balance is horrific, forcing me to change my TV settings for the first time since I connected my Xbox One X. Whites are sickeningly bright, to the point that any Caucasian character or street lamp looks like Casper the Friendly Ghost, if he was powered by the nuclear blast in Sarah Connor’s Terminator 2 dream. 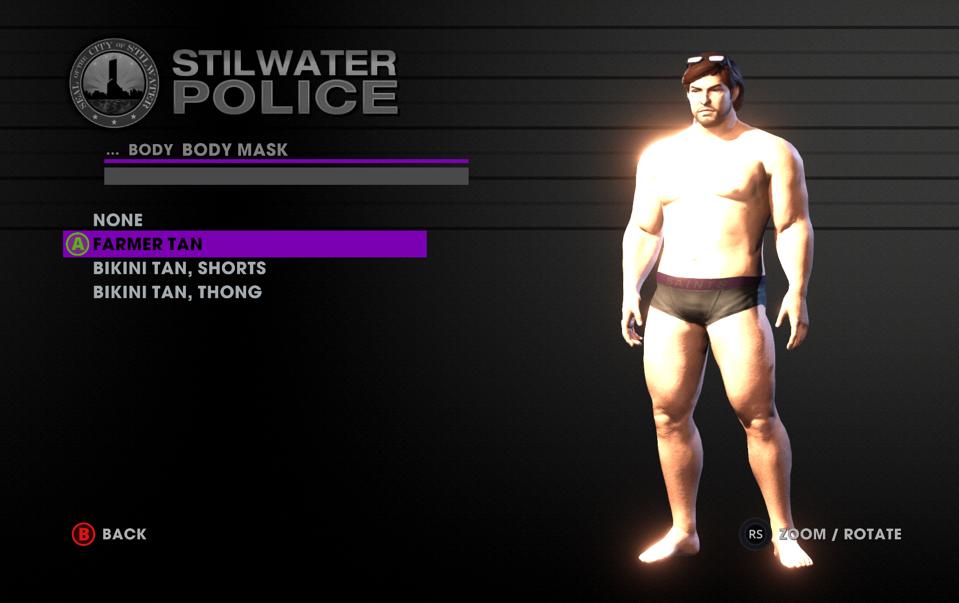 MY EYES, MY BEAUTIFUL EYES

Conversely, night missions–especially those when you’re in the skies–force you to rely on red tooltips to shoot enemies, like you’ve got cataracts. Pray you’ve got blackout blinds.

But Saints Row the Third Remastered does, to its credit, run very smoothly, even in the heat of a ten-vehicle, bullet-raining car chase. Admittedly, the original did too, but it’s nice to see the latest iteration step up to the plate. Weirdly, this trade-off for a half-decent graphical upgrade comes with some surprising “bonuses”. 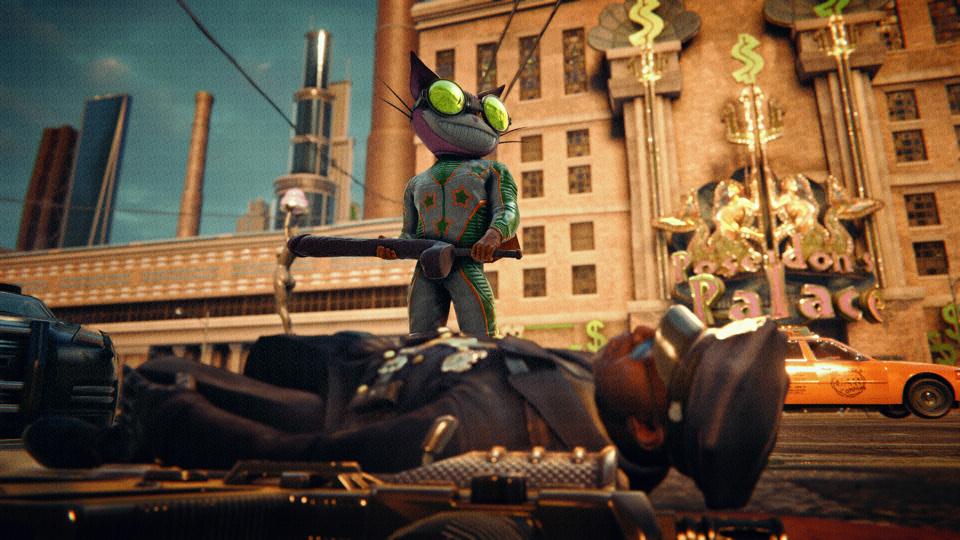 You too can kill an officer of the law with an oversized, baseball-bat-like sex toy.

Saints Row the Third Remastered is so glitchy that it actually becomes endearing, even when it destroys your enjoyment. I’ve experienced:

No, really, I’ve compiled them:

But I kept playing, and playing, and clearing out entire islands, because it’s just as addictive as it was in 2011. My lord, Saints Row the Third Remastered is still so great, even if it’s literally just a nicer-looking Saints Row the Third. I’m so glad it exists because so many other people will get to learn why this 2011 magnum opus for the series was so good–for so many reasons: 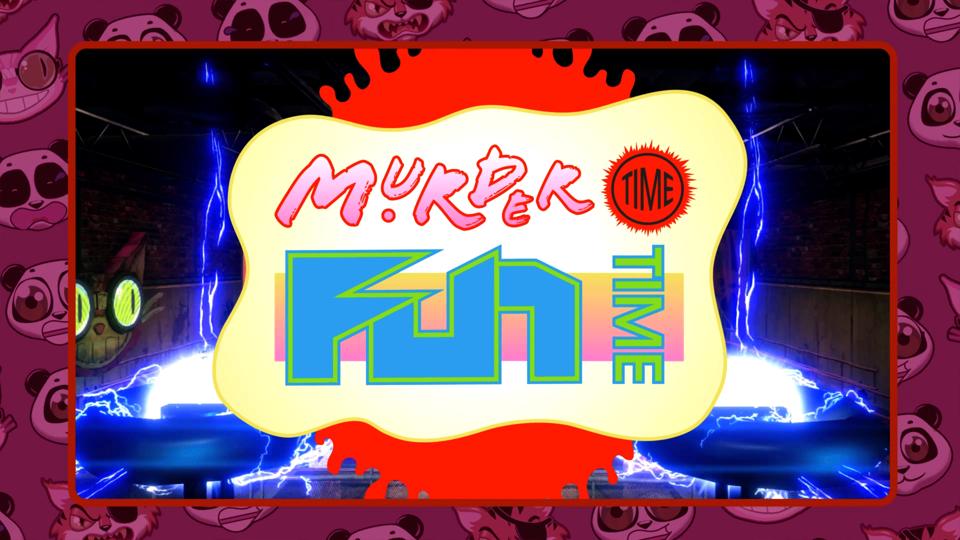 If there’s one takeaway, it’s that Professor Genki knows that Murder Time is Fun Time.

Ultimately, Saints Row the Third Remastered breathes a new lease of life into a game that was shockingly overlooked in its heyday. Yet it occupies a frustrating and somewhat annoying middle ground: the upgraded version isn’t the expected fan service many people like me expected, and I worry that it’s not up to scratch for new players expecting a genuinely modern action-adventure game.

It’s also a little frustrating to see that, out of the box, players get DLC weapons and vehicles immediately, making the early stages of the game so much easier, and some unlockable skills utterly redundant; the availability of the Saints Crusader tank is the worst offender. Maybe I should take this opportunity to request gamers exercise some self-restraint and play it like it was meant to be played. Eh, who am I kidding?

Luckily, it’s not a full-whack price; it’s $40. You’ll definitely get your money’s worth, if you can make do with its flaws. But if you’re on Xbox? Consider getting the original, which is backward-compatible on Xbox One. I picked up the Full Package edition for less than $10. If you’re already a fan, that fresh gloss of 4K paint doesn’t quite feel worth it when the 2011 outing was, and still is, brilliant on a budget.

Disclaimer: I was provided with a copy of Saints Row the Third Remastered in exchange for a fair and honest review.

To Stream Or Not To Stream: Live Celebrity Music Events Alternately Ease And Intensify Feelings Of Isolation, Anxiety And Resentment

What’s That Bright Star In The West? Why...