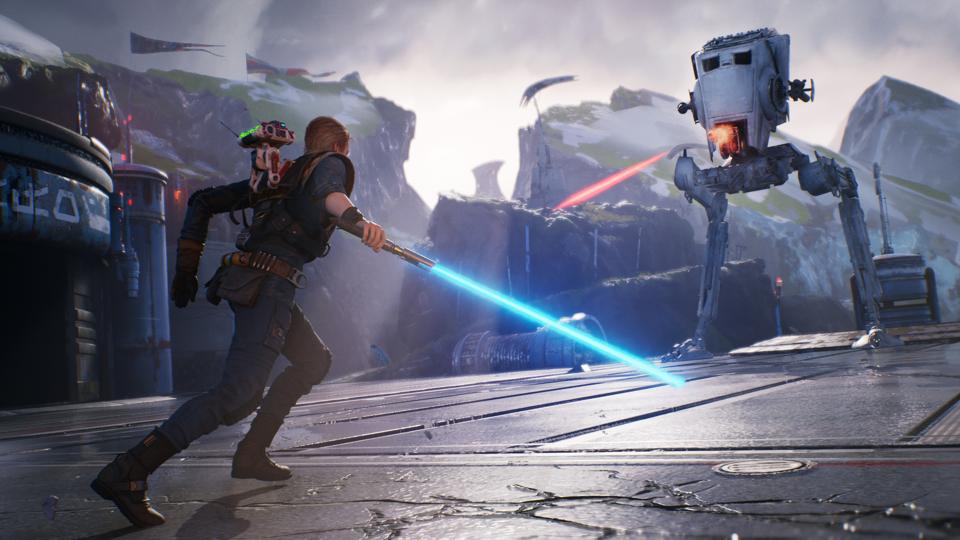 ‘Star Wars Jedi: Fallen Order’ isn’t perfect, but it delivers one of the most accessible … [+] action-adventure experiences in recent memory.

Star Wars Jedi: Fallen Order is a triumph. Chances are that you’re aware of this; the game’s been out since November and it’s already garnered its fair share of great reviews. It’s gone a long way to salvaging EA’s disastrous turn with the franchise–admittedly, with the help of golden goose Respawn–but on reflection, it’s setting new standards for its genre.

Third-person action-adventure games have always been incredibly inconsistent, and 2019 was no exception to the rule: the highs of Control and Sekiro were metered by the lows of Crackdown 3 and Days Gone. In 2020, there’s even more pressure for Cyberpunk 2077, The Last of Us Part II, Gods & Monsters and many more to perform.

Despite its imperfections, Jedi: Fallen Order isn’t just a great game; this latest Star Wars offering took calculated risks which made it the most engaging, enjoyable and, most importantly, accessible action-adventure of 2019. Two months on, its impact is so strong that it gives the genre’s upcoming blockbusters four lessons–or simple reminders–if they’re going to connect with players in the same way.

Some say that imitation is the sincerest form of flattery, and if you were to describe Fallen Order in these terms, you could say it was positively sycophantic. It draws on the gameplay and ideas of countless predecessors, but as a whole product, this appropriation plays entirely to its strengths.

The send-ups start as early as the game’s tutorial, when you’re under attack on a moving train, drawing obvious parallels with Uncharted 2’s in medias res first level as well as its “Locomotion” and “Tunnel Vision” chapters. Later, as you’re scaling an AT-AT in the waters of Kashyyyk, there’s a great chance you’ll be reminded of half the core battles from Shadow of the Colossus. There’s no doubt that Respawn had plenty of inspiration from other games, such as ‘Shadow of the … [+] Colossus’.

To tie it all up, Fallen Order uses the interplanetary navigation and exploration of The Outer Worlds, the unfolding upgrade system that opens up levels just like Ori and the Blind Forest, plus the puzzle-based platforming of the rebooted Tomb Raider series.

While I’m a huge fan of creativity and uniqueness–which really isn’t in short supply in gaming, critics be damned–many of the reasons I was excited to play Fallen Order in the first place was entirely because of these similar titles that came before. While many find it easier to sneer at developers for taking inspiration from others (the endless “Fallout in space” references spring to mind), familiarity shouldn’t breed contempt on principle.

Fallen Order still has plenty of originality up its sleeve, while also being cleverly wrapped up in the deeply immersive Star Wars universe, but easy comparisons should not be assumed to be a sign of laziness or a lack of imagination.

Strong acting is central to success

Although I might be swayed by my love of Star Wars as a whole, I don’t think I’ve played a game in 2019 which delivers as consistently brilliant acting as Jedi: Fallen Order. Others certainly offered great characters–Parvati Holcomb from The Outer Worlds in particular–but its depth of talent is a standard-bearer for action-adventure games to follow from now on. For every one of Fallen Order’s niggles–including its hot-and-cold story–the acting more than makes up for them. Cameron Monaghan excels as Cal Kestis: a headstrong but vulnerable youngster intimidated by his own powers. It’s a credit to his acting that BD-1–a droid admittedly on par with the beloved R2-D2 and 100 times more developed than Episode IX’s dull and unnecessary D-0–provides an even better opportunity to showcase his ability to turn the boops and beeps of a legged metal box into a brotherly dynamic.

Further down the roster, scrapper Prauf, expertly voiced by JB Blanc (Horizon Zero Dawn’s Rost, among others), provides a short-lived but powerful performance that gets you immersed in Cal’s gritty life immediately. David Roebuck’s stand-offish, wise-cracking pilot Greez Dritus is a compelling, surprising character who delivers one of the game’s most heartfelt speeches almost out of nowhere.

The real star of Fallen Order is Debra Wilson as Cere Junda, who follows her scene-stealing turn as Grace Walker in Wolfenstein II: The New Colossus with a stunning performance that exemplifies her broad acting prowess.

It’s ironic that The Rise of Skywalker regularly showcased below-average acting, while Jedi: Fallen Order has no such issue, despite acting performances being traditionally (but wrongly) considered less critical to a game’s success. Now, as graphical advances allow for “uncanny valley” levels of emotive facial recognition and body language, there’s no longer an excuse to hire second-rate talent, especially if it has this impact. Cere and Greez are fantastic characters that deserve all the praise they get.

Inclusionary difficulty without being lazy

This one might be controversial, but bear with me. Firstly, I openly admit that I’m not a Soulsborne man. As such, Jedi: Fallen Order–which promised a combat style that was compared to an entry-level Dark Souls–was always going to be a challenge, but one that finally gave me the opportunity to try my hand at it without quickly making me drive my controller through my forehead.

With its clever approach to difficulty, Fallen Order provides one of the few experiences that allows players to try something challenging but learnable at scale, and at a pace that suits them–something I personally could never grasp when playing Dark Souls, for all my faults. The whole point of Soulsborne games is to be brutally tough, but it’s still sad to be one of those people that just couldn’t get the hang of it.

Fallen Order could’ve been lazy and traveled down the time-honored route of pinning difficulty to health bars, enemy numbers or more accurate incoming fire. Instead, standard Stormtroopers will always satisfactorily die with one hit on any difficulty; it’s your parry and dodge windows that change, while enemy aggression and alertness are heightened. The lightsaber is always just as powerful, and rightly so. On any Jedi difficulty, battles are exciting and always require careful planning.

Fallen Order proudly tells you that your chosen level never affects the story or other achievements, driving home the fact that the reward for success at higher difficulties is that same Souls-like personal satisfaction. It feels great; if only others could follow suit in the future by providing that lower rung for more casual gaming.

2020 should be the year of photo mode

Last and, to be fair, least is something entirely aesthetic. Photo modes in video games are painfully inconsistent, and it’s about time that all action-adventure games follow in the footsteps of Jedi: Fallen Order–alongside Uncharted and Shadow of the Colossus–by letting players truly admire the beautifully realized vistas on show.

As with Colossus and the Forza Horizon series, I found myself spending an inordinate amount of time pressing both sticks in, mid-battle, just to switch to the camera mode to catch an incredible action shot. It didn’t interrupt my enjoyment of the game–it complemented it, helping me appreciate the level and character design even more. It’s amazing how many times you wonder whether to explore your location or photograph it.

It’s not just an added feature that makes the most of hard work; it’s free publicity. Hell, I used photo mode to take most of these images, and I don’t consider those literal hours wasted in the slightest.

It’s never too late to catch up

While the excitement around Jedi: Fallen Order has died down, there’s still every reason you should get it, especially now it’s cheaper than ever. Yes, it can be a bit glitchy; the battles can be frustrating; the Wookies seem to have been developed for the PS3; the bottomless pits are endless; every single sliding-down-a-slope section is as fun as doing the same in a muddy park in the middle of a stormy winter day in real life. Still, its strengths far outweigh its foibles.

While there’s little doubt that 2020 will bring at least a couple of excellent, immersive action-adventure experiences, there’s still a chance that others will ultimately disappoint. But if EA can salvage its Star Wars track record and find success with a wider, grateful audience by sticking to a few core rules, anyone can.

Disclaimer: I was provided with a copy of Star Wars Jedi: Fallen Order in exchange for a fair and honest review.