Breaking
How To Get Your Startup Business Off The...
How To Create A COVID Safe Construction Site
How to Make a Good First Impression at...
How To Retain Your First Startup Product Users
China Shipments To The U.S. Are 7 Times...
Reviewing ‘The iPhone Of Air Conditioners’
AARP BrandVoice: The Doctor Will See You Now,...
ThoughtSpot’s New Cloud-Based Tool Aims At Boosting Growth...
10 Ways Service-Based Businesses Can Generate Positive Word-Of-Mouth...
A Customer-Centric Culture Starts By Embracing This One...
Report: Struggling Black-Owned Businesses Need More Government Grants
Why The Fed’s Outlook Paints A Sobering Picture...
As The End Of 2020 Approaches, The Cybersecurity...
Do Businesses Have A Role In Solving Poverty...
Young And Powerful: She The Change
Want To Attract (And Keep) The Right Clients?...
Best Legal Practices For Reopening Sports Venues During...
Why Now Is A Good Time To Start...
Here’s Why Texas Instruments’ Stock Growing Almost 2x...
Home Business Review: TV Painting Icon Bob Ross Gets an Action Figure
Business 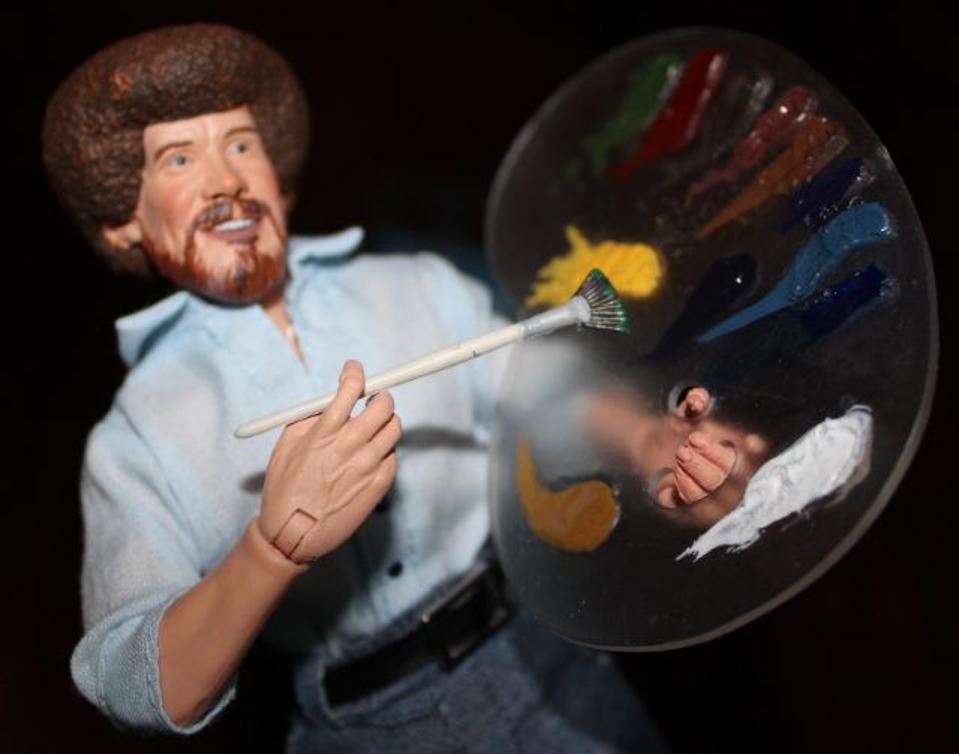 For 31 seasons on PBS, Bob Ross, the mellow fellow with the ‘fro, hosted The Joy of Painting for 11 years. Though his low-key manner and simple techniques for creating “happy trees” on canvas did not immediately catch on, he became cemented as part of the culture when, in 1993, two years before his death, he appeared on MTV spots. Initially, the appeal seemed ironic, part of Generation X embracing kitsch and loving “so bad it’s good.” But for subsequent generations, meme culture has venerated him as part of a “Holy Trinity” of kindness, alongside the late Fred Rogers and Steve Irwin. Under this logic, Ross represents kindness to oneself, Rogers kindness to others, and Irwin kindness to animals. When video streaming service Twitch marathoned the show in 2015, they claimed over 5.6 million viewers. They’ve continued to rerun the programs, keeping the late painter sufficiently recognizable that Ryan Reynolds spoofed him in a Deadpool 2 ad, and Funko even made a toy of Deadpool as Ross. 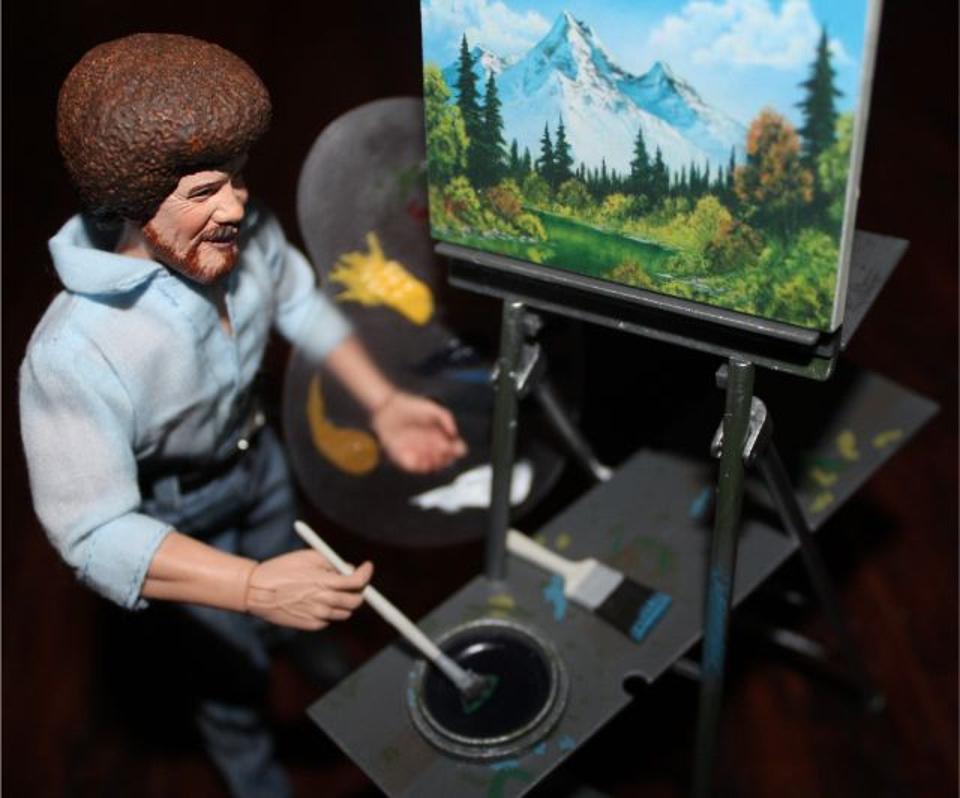 So an action figure was probably inevitable. NECA already made Bob Ross products via their chia head line, and now a fully poseable toy is here. Ross wasn’t a big action guy on TV, despite a background in the Air Force, but you can have him strike any painting pose you choose…or get more action-oriented if that’s what you really want a Bob Ross figure to do. 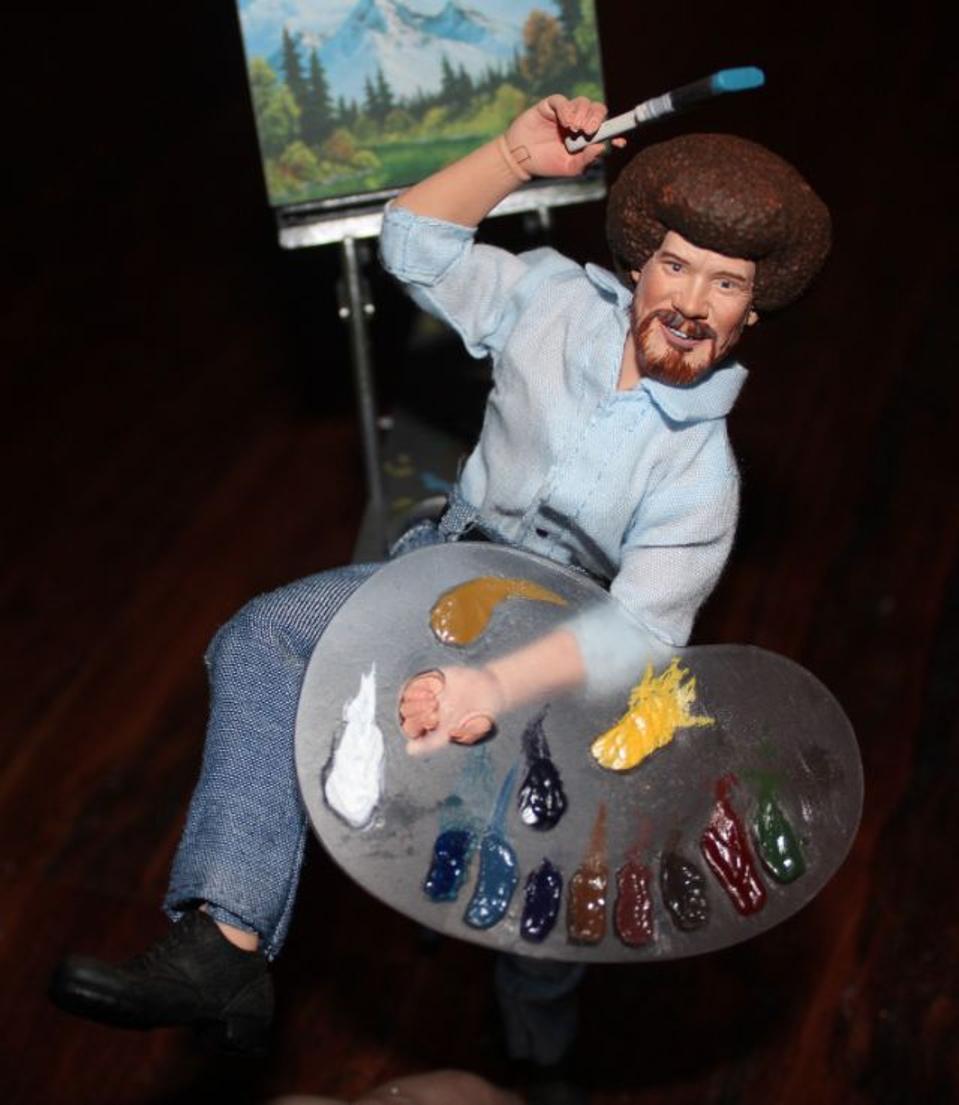 Paint on, paint off.

Ross utilizes the “retro-style” body, a generic 8-inch figure frequently clothed, used to save money on sculpting for shorter-run/more niche licenses. But this one is new. NECA has given the body an upgrade, now with double-jointed elbows and mid-torso ball-joint replacing the cut waist articulation. Ankles also now have ball articulation for wider range. The body is much improved, and while you might not want Bob Ross to go full Karate Kid, the point is it can be done. 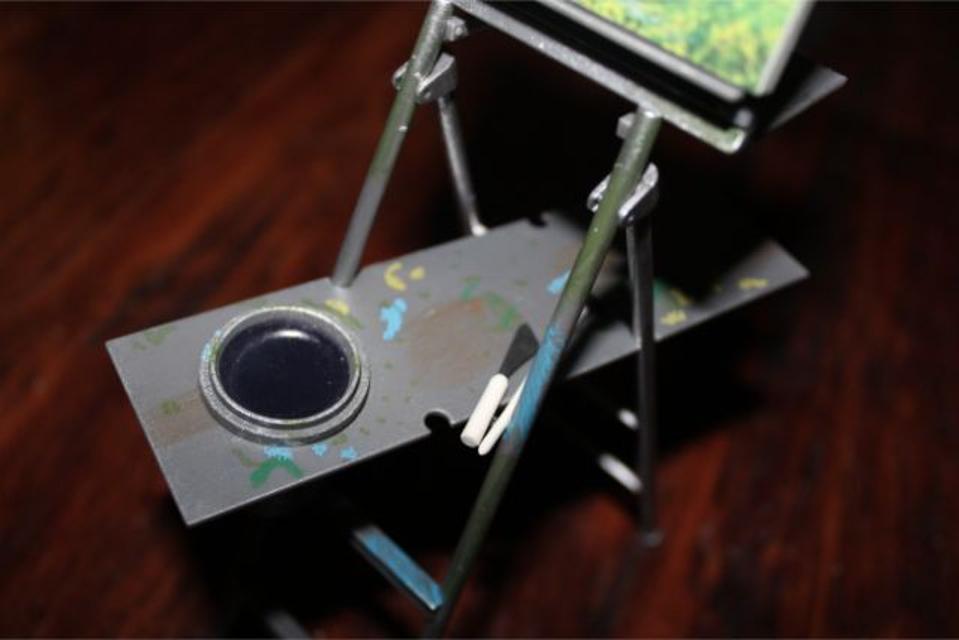 The accessories, however, go all out with detail. Check out the multiple paint smears on his translucent palette, or the paint stains on his easel. He can hold three separate brushes, and the paint bucket can be removed from the easel set-up. For $32.99, there’s a lot of value here. Most NECA retro-style figures retail at about that, and have significantly fewer accessories. He has them all, and a new body to boot. The facial likeness is also quite a bit better than some in this scale. 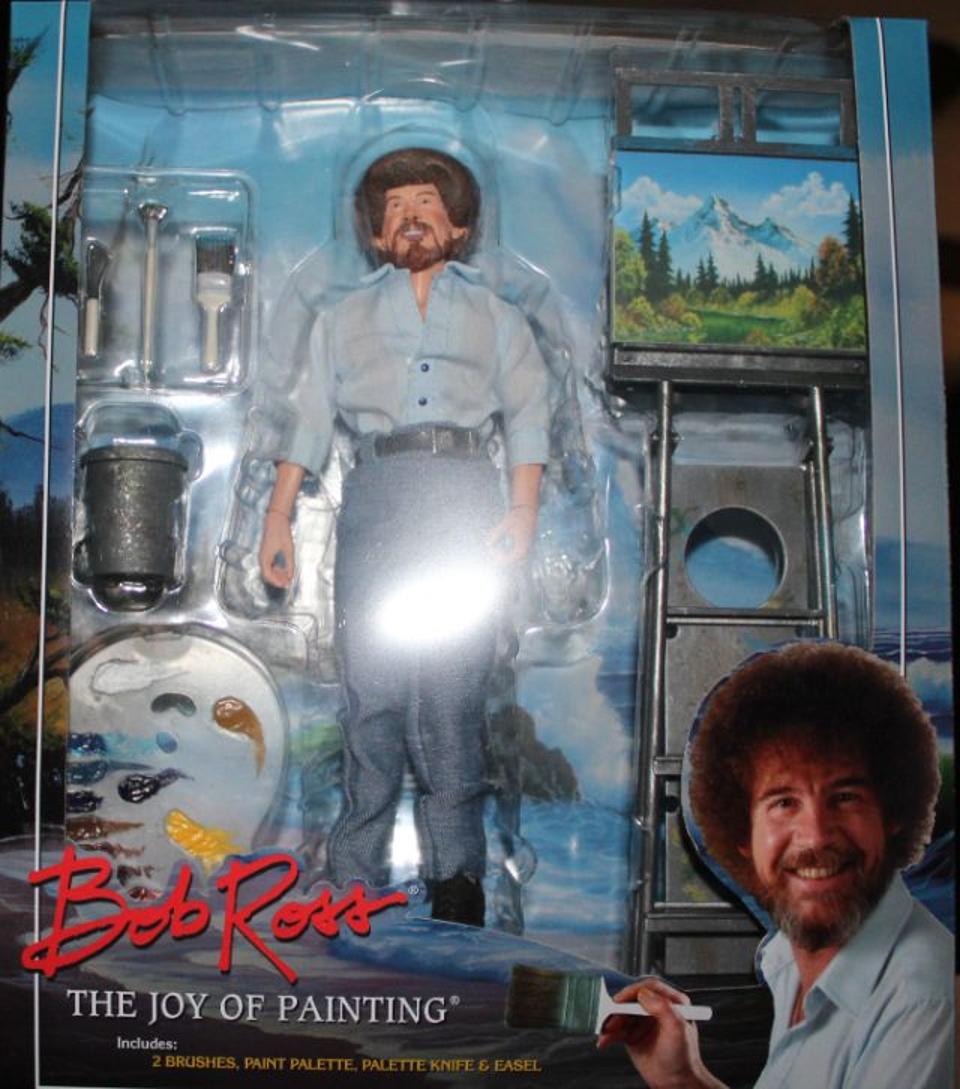 Package-wise, he’s held in place by plastic ties like the kind one finds in shirts to affix the prices. These have to be cut or eased out of to let the figure emerge, but that asid, it’s easy enough to get him back in the box after play. The package insert, fittingly, resembles a Ross painting.

Is there a huge market for gentle PBS hosts as action toys? I feel certain Mr. Rogers would do well, though his estate is more conservative about what they license than Ross’. One shouldn’t necessarily expect kids to be super-pumped to play with a low-key painter, but plenty of adults may choose to display the painter of happiness. And my wife has already demanded ownership over my review sample from NECA, so perhaps that is a trend.