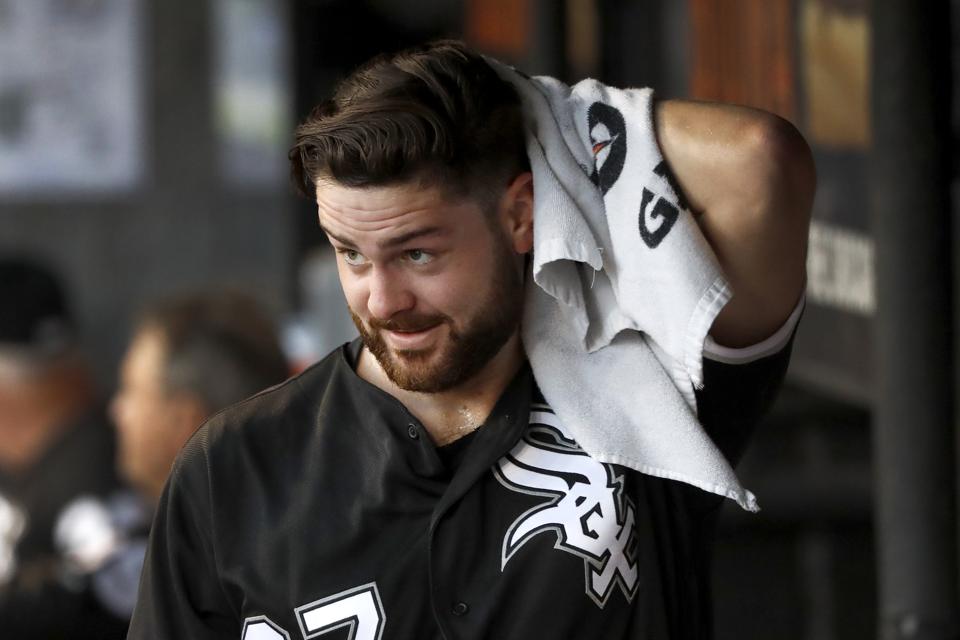 Pitchers mature and evolve in any number of ways. They usually arrive on the major league scene on the strength of their raw tools, and they develop the finer points – command, pitchability, durability, you name it – on the job.

To generalize, young power arms often evolve into old finesse pitchers, while young finesse pitchers often evolve into, well, young broadcasters. The greatest of the great – the Verlanders, Scherzers, etc., – continuously make adjustments to stay at the top of their areas of strength, while improving at their areas of weakness. Both have always been legendary bat-missers, but their contact management ability has greatly improved with age.

What to make, then, of the path staked out by young White Sox ace Lucas Giolito in his first two full seasons in the major leagues? We first discussed him back in June. The gist of that piece was the overnight turnaround of his K and BB rates relative to the league. In 2018, his K/BB ratio was (1.67) standard deviations below league average; his K rate was (1.42) standard deviations below.

Those combined (3.09) standard deviations below average was worse than all but 11 ERA-qualifying starting pitchers since 1980. Those 11 hurlers are discussed in that June piece. Only Jim Beattie among them ever had a year resembling Giolito’s 2019 over the rest of his career, though Bill Swift did develop into a solid control artist over a brief period.

Over the rest of the 2019 season after that article was written, Giolito got even better. Year-on-year, his K rate actually more than doubled, from 16.1% in 2018 to 32.3% in 2019. To put it another way, it went from over a full standard deviation below league average in 2018 to over a full standard deviation above in 2019. That struck me as being extreme, to put it mildly, so I set out to see if it had ever been done before.

Using the same 1980 benchmark used in the June article, I found exactly one other pitcher whose K rate made such a jump – Mike Moore, from 1987 to 1988, at age 27-28. Moore was an interesting cat, whose overall performance as well as his K rate swung wildly throughout his career.

I adjusted the benchmark back to 1938, and found only one more pitcher whose K rate jumped similarly, Pedro Ramos in 1962-63, also at age 27-28. Ramos had been a power pitcher as a very young man, saw his K rate decline as his innings pitched totals jumped, and then saw it spike in 1963 when his role changed and his usage was scaled back, though he still exceeded 162 innings.

So what Giolito did in 2019 was virtually unprecedented, and had never been accomplished by someone nearly as young (24) as he was in 2019.

On occasion in this space I have discussed the concept of the K/BB Multiplier. There is a direct multiplicative relationship between that multiplier, based on a pitcher’s K and BB rate relative to the league, and his contact management performance, based on his Adjusted Contact Score. The product is roughly equal to his “Tru” ERA-, my proxy for FIP- that is based on batted ball data.

In 2018, both Giolito’s K and BB rates were over a full standard deviation worse than league average, giving him a K/BB Multiplier of 1.28. This meant that Giolito would have needed a 78 Adjusted Contact Score – i.e., Contact Manager of the Year territory – to have simply been an average pitcher overall. Something had to be done.

Well, something was done. With a K rate over a full standard deviation above average and a league average range BB rate, his K/BB Multiplier plunged to 0.78. Now, he can be the worst contact manager in the league (128 Adjusted Contact Score) and still be a league average pitcher overall.

Let’s break his year-end numbers down on a pitch-by-pitch basis, as we did in the June article. In 2018, Giolito was a four-pitch guy, throwing a four-seam fastball, sinker, changeup and slider, in that order of frequency.

All but the four-seamer graded out as “B”, or league average pitches in that season. His sinker had a 5.0% whiff rate and 95 Adjusted Contact Score, both in the league average range. His change (15.9%, 82) and slider (16.7%, 88) were also average in both aspects. The four-seamer (4.7% whiff rate, over a full standard deviation below average. and 100 Adjusted Contact Score, over a half standard deviation better) got a “C+”.

In 2019, Giolito narrowed his repertoire to three pitches, dropping his sinker. He increased his four-seamer usage from 42.6% to 55.0%, and it evolved into his best pitch. Its 11.4% whiff rate was over a full standard deviation better than league average, and its 91 Adjusted Contact Score was over a half standard deviation better. That’s an “A” pitch.

Not too many pitchers can miss bats and manage contact with their four-seamers – but Cole, Verlander, Scherzer and Jacob deGrom do. That’s the company Giolito is keeping. He went from a league average pop up rate to over a full standard deviation above, largely on the back of his fastball.

He also increased his changeup usage from 15.5% to 26.2% last season. Its effectiveness also ramped up, as he recorded a 22.1% whiff rate (over a full standard deviation above league average) and a league average range 77 Adjusted Contact Score. This is now a “B+” pitch with Grade A potential. It too is an above average pop up generator.

His slider actually slid a bit backward in effectiveness last season. Its whiff rate did nudge up a bit to 19.1%, still in the league average range, but its 131 Adjusted Contact Score was over a standard deviation worse than league average. On balance, it was a “C+” pitch. Its usage rate (14.7%) was almost exactly the same as in 2018.

So what do we have? The makings of a legitimate staff ace, still a year away from even being eligible for arbitration. The White Sox have made a lot of moves this off-season – some I like quite a bit, some not so much. Bottom line is, they’re trying to win, and in both Central Divisions, that is half the battle. It would be unfair to expect Giolito to make another big jump right away, but there is still more upside here. That’s a scary thought.

15 Smart Ways To Cut Through The Noise In Local Advertising

If You Want To Maximize Your Career, You Need Need To Embrace Freedom And Accountability. Seven Insights To Guide Your Way

‘High Noon’ Is A Tactical Wild West Board...

Blair Damon Is Helping The Homeless One House...