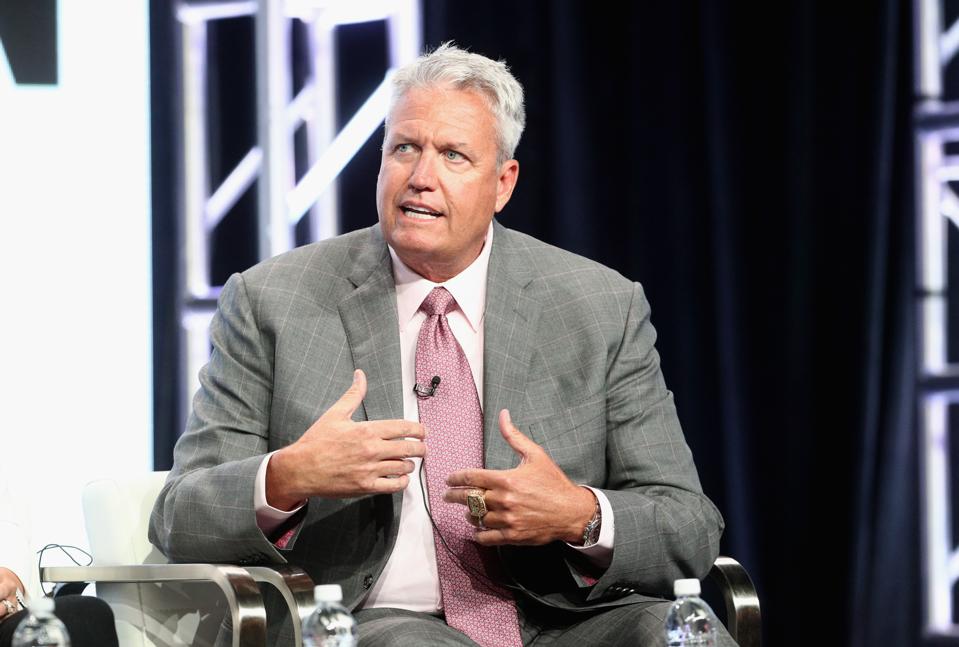 Presumably, ESPN hired Rex Ryan for his bombast. The former Jets and Bills head man frequently made headlines with his mouth in his coaching days, proclaiming he was not in New York to “kiss Belichick’s rings” and imploring everyone to “get a g**damn snack!”

It should come as no surprise Ryan is now doing the same as an analyst, and hopefully the latest round of bad press doesn’t dissuade him from continuing to share actual opinions. There is nothing wrong with ripping players from the confines of a television studio. It is the job.

Ryan stirred up trouble recently when he lambasted the Cowboys for signing wideout Amari Cooper to a five-year, $100 million deal. “I wouldn’t have paid this guy,” Ryan said, via Yahoo! Sports. “To me, this is the biggest disappearing act in the National Football League. He doesn’t show up on the road, he doesn’t show up against, when the competition’s good, when he’s against the top corners, that guy disappears. … I wouldn’t have paid this turd! No way in hell! No way in hell would I have paid this guy!”

The trouble spurs from Ryan’s decision to call Cooper a “turd” on national television for the crime of apparently disappearing in big football games. The term is unnecessarily harsh and juvenile, and frankly, more befitting of a sports talk radio caller than highly paid ESPN NFL analyst. ESPN does have a $15 billion partnership with the league, after all.

Some NFL players lambasted Ryan for his sophomoric insult, including Devin and Jason McCourty. “I just wanted to call ESPN and say, ‘ESPN, listen. You have the Jordan documentary coming out. You don’t need to air Rex Ryan,” Devin McCourty said, via NJ.com.

Ryan rightfully apologized for his word choice. “I can’t believe I said that, used that word,” he said on “SportsCenter” later Friday.

It is unlikely Ryan planned to personally insult Cooper on national TV. But when you are in the midst of a rant on live TV or radio, sometimes it is hard to regain control. Take it from me: the glib remarks often land you in the most trouble.

This is not the first time Ryan’s harsh criticism has caused ire among NFL players. He regularly ripped Baker Mayfield last season, saying the young Browns QB was “overrated as hell.”

In turn, Mayfield said there was a reason Ryan was talking about the NFL on TV, and not coaching on the sidelines. Nicely done.

Two years ago, Ryan was one of the first national pundits to call out Rob Gronkowksi’s declining play, saying the former All-Pro tight end looked like he was “running with a piano on his back.” Gronkowski wound up retiring at the end of the season, but not before catching the pass from Tom Brady that set up the Patriots’ game-winning touchdown in Super Bowl LIII.

As a longtime defensive coordinator and NFL head coach, there’s little doubt about Ryan’s football acumen (save all of the Jets jokes for later, please). He is also one of only three head coaches who defeated Tom Brady at Gillette Stadium in a playoff game. That must be worth something, especially considering Mark Sanchez was the Jets’ quarterback that season. (Plus, Ryan hails from one of our most decorated football families.)

In other words, Ryan is not an average sports talk jock bloviating into the microphone with little expertise to draw from. Yes, he got fired as head coach of the Bills, but that is why the bulk of ex-coaches get into commentary. It’s nothing to be ashamed of.

As ESPN continues to search for its next star “Monday Night Football” analyst — the WorldWide Leader reportedly is now chasing after Drew Brees — it should keep Ryan in mind. Obviously, bringing in Ryan would not invite the same splash as Brees or another big-name player, but he would generate buzz around the broadcast.

Ryan’s strong opinions should propel his analyst career, not send him tumbling backwards. The blowback is part of growth.

‘Borderlands 3’ Is Giving Out New Loot If You Help Them Map The Human Gut Microbiome, Wait What?