Home Technology Risk High That Psychological Pitfalls Will Cause U.S. COVID-19 Outbreak To Be More Fatal Than The Spanish Flu
Technology

Risk High That Psychological Pitfalls Will Cause U.S. COVID-19 Outbreak To Be More Fatal Than The Spanish Flu

There is good reason to believe that the psychological pitfalls which have caused the U.S. to lead the world in most confirmed COVID-19 cases will continue to plague the country’s efforts to combat the outbreak. The risk is high that these pitfalls will make the COVID-19 pandemic more fatal for this country than the Spanish flu. Such is the cost of psychological pitfalls. To fight COVID-19, we must also address these pitfalls.

Psychology is crucial to why we are facing the current pandemic. Just compare the COVID-19 experiences of the U.S. and South Korea.  In contrast to the fiasco in the U.S., South Korea managed to stabilize the COVID-19 outbreak within its borders. 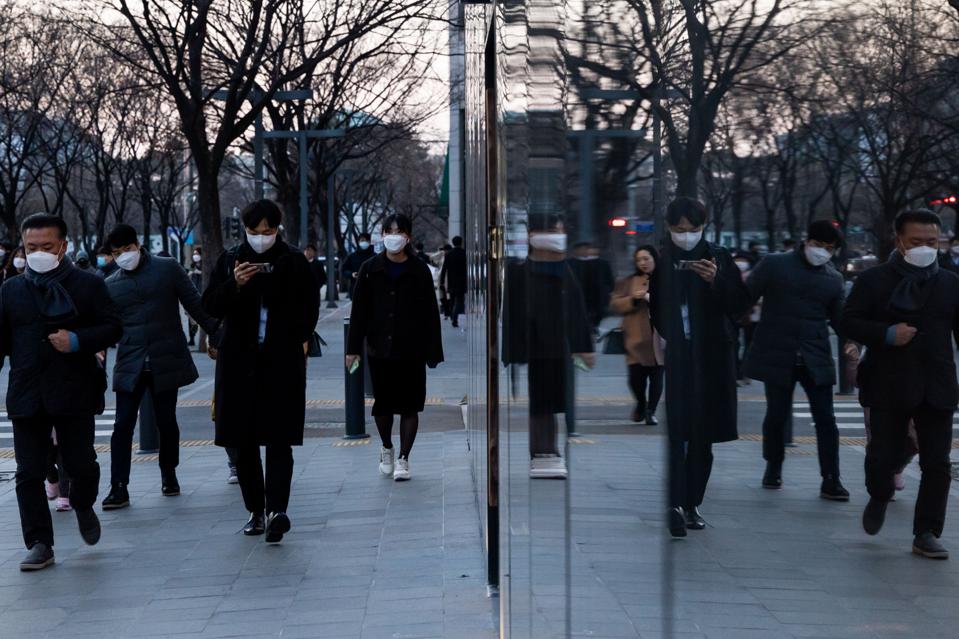 Pedestrians wear protective face masks in the Yeouido financial district of Seoul, South Korea, on … [+] Thursday, Feb. 27, 2020. The U.S. urged travelers to reconsider trips to South Korea as the country’s number of cases of the coronavirus rose to more than 1,500. Photographer: SeongJoon Cho/Bloomberg

To put some numbers on the comparison, had the U.S. been able to achieve what South Korea achieved, the total number of cases in the country would stabilize below 65,000, and the number of deaths would stabilize below 1,000. Instead, the current U.S. situation not only features twice these numbers, but is increasing exponentially.

There are plausible estimates that when the U.S. does manage to stabilize the outbreak, approximately two thirds of the country’s population will have been infected with the novel coronavirus, and the number of deaths will lie somewhere between 200,000 and 4 million.  In this regard, the CDC estimates the range to be between 200,000 and 1.7 million, which to me is suggests forecasts that are unrealistically optimistic.

It would be nice if the U.S. could go back in time and follow South Korea’s containment strategy. However, doing so is now impossible. We need to focus on the future. As we do so, we should endeavor to identify the psychological pitfalls that have plagued the U.S. thus far, to try to avoid making the future worse than it needs to be. There is reason to believe that sensible policy will limit the deaths to about 1.7 million; however, if psychological pitfalls continue to plague the country’s decision culture, then there is a reasonable risk that the number of deaths will approach 4 million.

To place this into perspective, were the U.S. population in 1918 the same as today, then the Spanish flu would have produced about 1.5 million deaths. This implies that we are on track for the COVID-19 pandemic to be more fatal than the Spanish flu, despite the advances in modern medicine and health over the last century; and a major contributor to this state of affairs is our vulnerability to psychological pitfalls.

Bruce Aylward, the epidemiologist who headed a World Health Organization (WHO) visit to China early in the year, has pointed out that effective strategy for addressing the spread of coronavirus involves a combination of tests, quarantines, isolation, and treatment. This is what South Korea has managed to do successfully, especially by developing COVID-19 test kits early.

South Korea moved quickly because unlike the U.S., they did not suffer from a behavioral pitfall known as “availability bias.” Availability bias stems from placing undue weight on information that is readily recalled from memory. Seared into South Koreans’ memories are recollections of a botched job in 2015 of managing the outbreak of MERS in their country. In contrast, the U.S. has not had a comparable epidemic in recent memory, and as a result its leading officials failed to assess the coronavirus threat sufficiently.

“Overconfidence” is a major psychological pitfall. The U.S. has badly botched the job of producing novel coronavirus test kits, suggesting the country’s officials exhibited “overconfidence” about American ability. Worse still, is that the current administration has institutionalized group process pitfalls such as “groupthink” and “insufficient information sharing,” because the President does not like to hear news he regards as unfavorable; and he engages in “kill the messenger” behavior.

Once the test kit problems became clear, many weeks ago, ineffective group processes prevented the country from quickly considering other alternatives, such as using a German-developed test that was being distributed by the WHO, or engaging South Korean producers to supply test kits. This behavior was compounded by a psychological pitfall known as “the illusion of control,” which leads decision makers to hold exaggerated beliefs about the amount of control they exercise over outcomes. Control is one of the key determinants of what leads people to exhibit the pitfall known as “unrealistic optimism.” Such optimism has been apparent in the history of public statements by administration officials about the outbreak.

There is currently an important and serious debate in the U.S. about how to balance social containment measures intended to fight the spread of COVID-19 against the associated costs to the economy. Economists Martin S. Eichenbaum, Sergio Rebeloz, and Mathias Trabandt have developed an integrated assessment model, which blends the traditional approach to studying epidemics with a model of economic activity.

The integrated assessment model generates key recommendations for balancing health issues and economic costs, in the context of traditional U.S. norms. An important assumption of this model is that peoples’ behavior is perfectly rational across the board, meaning they make rational decisions as consumers, as workers, and as policy makers.

If the past is prelude, then psychological pitfalls will prevent the U.S. from following anything resembling a rational strategy.

In the rest of this post, I will sketch the main features of what a rational strategy looks like, and then discuss how psychological pitfalls might generate serious obstacles to it being achieved.

Policy recommendations about the strength of containment implied by the integrated assessment model depend on factors such as the capacity of the health delivery system to treat the outbreak, and the prospects for developing vaccines and treatments. In the remarks that follow, I focus on policy recommendations when the health delivery system is likely to become overwhelmed by the number of COVID-19 cases, and when the prospects for vaccines and treatments in the near to mid-term are modest.

As we are all too aware, the conditions just described prevail at present. The integrated assessment model indicates that under these conditions, the appropriate policy involves very strong containment measures which peak 26 weeks after the first infections. The first case of COVID-19 in the U.S. was confirmed on January 20, 2020. This suggests that the first infection occurred one to two weeks before that.

Roughly speaking, 26 weeks from the first infection takes us to the end of June, meaning that according to the appropriate policy, peak containment occurs at the end of June.  In contrast, President Trump has been calling for relaxed containment shortly after Easter.

President Trump’s call for relaxed containment after Easter stems from his desire to limit the damage to the economy. In this regard, the integrated assessment model was designed precisely to balance the tradeoff between pandemic mortality and economic costs.

The integrated assessment model indicates that if the U.S. follows a sensible containment policy, then there will be a decline in economic activity, from peak-to-trough, of about 20%, with the economy returning to normal in about three years. The model predicts that this policy will result in about 1.7 million deaths from COVID-19 in the U.S. The model also assesses the impact of weaker containment in which economic activity returns to normal in about a year and a half. This weaker containment policy results in closer to 4 million deaths.

Which containment policy the country chooses reflects the manner in which U.S. society values life. The values we have followed in the past, and which are quantitatively embedded in our policy frameworks, favor saving 2.3 million lives at the cost of an extra 1.5 years of downturn. Policy makers urging weaker containment for the sake of the economy are implicitly placing a much lower value on American lives.

This is the stark truth. Given that past is prologue, there is a high risk that psychological pitfalls will lead policy makers favoring weak containment to underestimate the number of deaths and to overestimate the speed with which the economy rebounds. The risk is also high that these policy makers will induce the same biases in the general population. In this regard, a recent Gallup poll suggests that about 60 percent of Americans held a favorable view of the manner in which the President has been managing the COVID-19 outbreak.

There is also a high risk that a psychological feature known as “decision fatigue” will weaken people’s will to maintain sensible containment procedures, especially as signs of improvement emerge. Evidence of this feature can be seen in Hong Kong, which initially put effective containment measures in place but then got complacent when the situation improved. As a result, Hong Kong is now dealing with the third appearance of COVID-19 in the space of a few months.

The record number of unemployment claims this past week provides support for the forecast that the U.S. economy will experience a peak-to-trough decline whose magnitude is comparable to that experienced during the Great Depression. The integrated assessment model tells us that this is unavoidable, even if we choose the weakest possible containment policy.

We just have to face facts, focus on our traditional values, and do our best to limit the damage from psychological pitfalls, so that we do not make a bad situation much worse than it needs to be.

Should You Really Stop Paying Your Student Loans Due To Coronavirus?

How To Operationalize Innovation

How To Get Galaxy Opal Magic Johnson, Carmelo...