Breaking
Making America’s Trumps Pay Their Fair Share
Fortnite Season 4, Week 9 Challenges Revealed And...
Yesterday You Were Just A Business; Today You...
Should Your Company Help Get Out The Vote?...
Hyperautomation And What It Means For Your Business
Parker-Hannifin Crosses Pre-Covid Peak But Investors Set To...
6 Reasons Your Cold Messaging Efforts Fail And...
4 Analytics Categories To Track To Improve Your...
Predictions 2021: Cloud Computing Powers Pandemic Recovery
This Is Why You Need A Strategy In...
Economic Research Exposes Significant Flaws In DOL H-1B...
How Breast Cancer Turned This Entrepreneur Into A...
Bitcoin Price: What Next After Fresh Surge Toward...
Societal Platform Thinking
Trump And Biden Will Debate Suburbs’ Future To...
Apple Has More Bad News For iPhone 12...
Home Business Rockets Guard Eric Gordon Shines In Return
Business 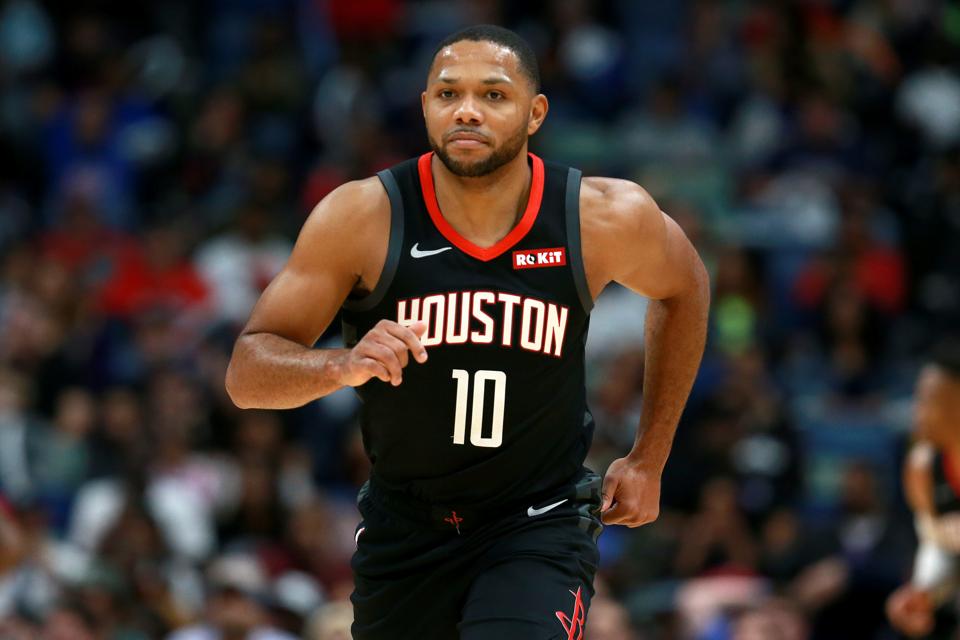 NEW ORLEANS, LOUISIANA – NOVEMBER 11: Eric Gordon #10 of the Houston Rockets stands on the court … [+] during a NBA game against the New Orleans Pelicans at the Smoothie King Center on November 11, 2019 in New Orleans, Louisiana. NOTE TO USER: User expressly acknowledges and agrees that, by downloading and or using this photograph, User is consenting to the terms and conditions of the Getty Images License Agreement. (Photo by Sean Gardner/Getty Images)

On Sunday night, the Houston Rockets got what may be the biggest midseason addition any contending team will make this season in the form of guard Eric Gordon. Gordon had been inactive since November 13, missing the Rockets’ last 22 games following surgery to his right knee. He had played in nine of the team’s first ten games to start the season, averaging just 10.9 points per game on 31% from the field and 28% from ‘3’.

On Sunday night, in his return to action against the New Orleans Pelicans, in a loss, Gordon played 22 minutes, scoring 20 points on 6/12 shooting from the field, and 4/7 on 3’s. He looked quick off the dribble and confident with his shooting, not displaying the rust one would expect from a player who had missed six weeks. The Pelicans put the game away in the fourth quarter against a Rockets team that was missing James Harden, Russell Westbrook, and Clint Capela. Gordon was not on the floor in the latter stages of the fourth as the game slipped away.

Gordon’s return to the lineup is the greatest cause for optimism for a Rockets team that found itself sitting in the third seed in the West entering Sunday’s game. The team was just three games out of first place despite playing the majority of the season without the sharpshooting Gordon. Gordon has won a Sixth Man of the Year Award and been a vital cog to the team’s success over the past three seasons.

Entering the weekend, the Rockets’ starting quintet of Harden, Westbrook, Capela, Danuel House Jr., and P.J. Tucker had the best defensive rating (97.3) in the league among all quintets to have played 250 minutes. That unit also had one of the top overall net ratings (+13.4) in the league. With such dominant production from Houston’s starting group, the thinking continues to be that Houston could take off and climb in the standings with a boost to its bench. That boost presumably would be Gordon.

Gordon’s dreadful start to the season played a contributory role in Houston’s slow start (3-3 to start the year.) Houston’s opening day starting lineup of Westbrook/Harden/Gordon/Capela/Tucker was a -74.2 in 26 minutes of shared court time. Replace Westbrook with House, and the unit was -22.8 in 30 minutes. It soon became clear that Gordon was playing injured once the announcement regarding the surgery was made.

The Rockets hope that after the procedure, Gordon regains the lift that allowed him to space the floor for Harden and Chris Paul for the past two to three seasons. On Sunday night, he looked well on his way back to full strength.