Breaking
Rival Independent ‘Oversight Board’ Formed By Facebook’s Rivals
Meet George The Poet: Spoken Word Artist Partnering...
Parrot Plumage Color May Be Linked To Body...
Best Applicant Tracking Software
Recent Precious Metals Dip A Buying Opportunity
Looking For Venture Capital? Here’s How One 50+...
Trump Will Create More Debt Than Obama
Growing Your Retirement Money Using 401(k) Dollar-Cost Averaging
Wellness Exec Abby Miller Levy Partners With Venture...
Microsoft Teams Issues Strike To Zoom With Tidal...
What’s Coming For The S&P 500 In October
4 Ways You Can Showcase Empathy With Your...
A $22,000 Microsoft Surface Will Soon Be For...
Zooming In – Should SMEs Invest In The...
iOS 14: The Surprising Security Risk Of Sharing...
How A Break From Lord Sugar Changed The...
Home Business Rohingya Muslims: The Name That Aung San Suu Kyi Did Not Want To Say
Business

Rohingya Muslims: The Name That Aung San Suu Kyi Did Not Want To Say

On December 10, 2019, the International Court of Justice (the ICJ), the principal judicial organ of the United Nations, begun a hearing in the case of the alleged genocidal atrocities in Myanmar. The hearing was focused on provisional measures only, as requested by the Gambia, including measures within the Burmese government’s power to “prevent all acts that amount to or contribute to the crime of genocide” and “not destroy or render inaccessible any evidence related to the events.”

The case was initiated by The Gambia on November 11, 2019, a few days after The Gambia made the promise at the UN General Assembly. The Gambia’s application alleges that the Government of Myanmar has been complicit in atrocities committed against the Rohingya Muslims, including “killing, causing serious bodily and mental harm, inflicting conditions that are calculated to bring about physical destruction, imposing measures to prevent births, and forcible transfers, are genocidal in character because they are intended to destroy the Rohingya group in whole or in part” in violation of the UN Convention on the Prevention and Punishment of the Crime of Genocide (Genocide Convention). 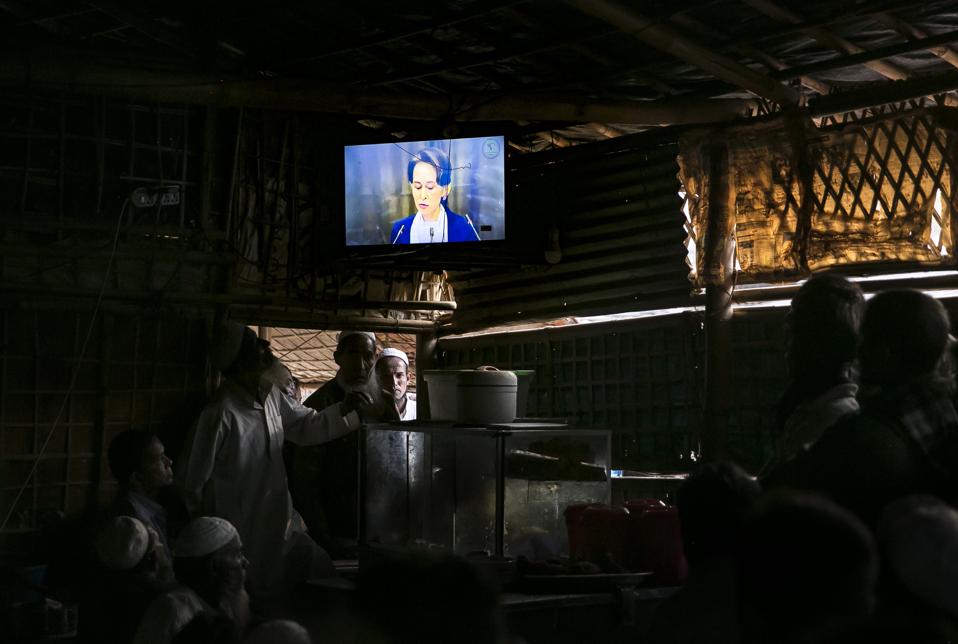 With the ICJ listening to submissions from both sides, one issue became very clear, the Burmese government, including Aung San Suu Kyi, acting as Agent of Myanmar, despite facing severe accusations, still refuse to recognize the identity of the Rohingya Muslims.

Aung San Suu Kyi, who made a statement before the ICJ on December 11, suggested that: “The situation in Rakhine is complex and not easy to fathom. But one thing surely touches all of us equally: the sufferings of the many innocent people whose lives were torn apart as a consequence of the armed conflicts of 2016 and 2017, in particular those who have had to flee their homes and are now living in camps in Cox’s Bazar.” While the intervention tries to project some compassion, it is noteworthy that throughout her entire intervention, Aung San Suu Kyi does not refer to the identity of those targeted, the Rohingyas, the Rohingya Muslims, an ethnic and religious minority group.

The fact that Aung San Suu Kyi refused to call the targeted group by its identity is not a matter of semantics only. It is a clear denial of their identity. Myanmar would not want to have an agent for the state clearly recognizing the identity of the Rohingya Muslims before the ICJ. This would not have been beneficial for the future proceedings before the ICJ. Indeed, after the provisional measures hearing, and after the ICJ makes a decision on the measures, the parties would need to meet again for a further hearing where the question of genocide would be explored.

Genocide has a precise legal definition found at Article II of the Genocide Convention. The specific targeting of an ethic or religious group for annihilation is the cornerstone of that definition. Aung San Suu Kyi intervention distracts from the ethno-religious identity of the group and is a calculated tactic to build a foundation for the proceedings that will follow. Let’s not be fooled by this. The denial of their identity in her intervention speaks volumes and reflects the denial of the Rohingya Muslims identity in Myanmar. Indeed, as Professor Gregory Stanton explains, the last stage of genocide is not the annihilation of the targeted groups but denial.

Aung San Suu Kyi also emphasized that the recent work carried out by the Burmese government was aimed at assisting the affected communities. Efforts apparently include “striving to ensure that all communities enjoy the same fundamental rights”, “to expedite citizenship verification and application”, “all children born in Rakhine, regardless of religious background, are issued with birth certificates”, “arrangements have been made to enable more Muslim youth to attend classes at universities across Myanmar”, “scholarships will also be made available to students from all communities living in Rakhine”, “the Government has started a social cohesion model project in Maungdaw Township, to promote social harmony among all communities”, “interfaith fora have been encouraged”, “these are some of the steps taken to improve livelihoods, security, access to education and to health, citizenship, and social cohesion for all communities in Rakhine.” With these arguments she challenged the accusations that a genocide had occurred. She asked “how can there be an ongoing genocide or genocidal intent when these concrete steps are being taken in Rakhine?”

However, it is noteworthy that Aung San Suu Kyi refers to very recent developments. This does not change the fact that the alleged atrocities of 2016 and 2017 amounted to genocide or were conducted with genocidal intent. It only means that the Burmese government has learned lesson, that they are now more careful. Furthermore, the wording she used is very weak, suggesting that these policies are not achieved. It is highly likely that they are not being pro-actively implemented.

Aung San Suu Kyi made a case that the ICJ should leave Myanmar alone and that the issue of justice in Myanmar is for the Burmese domestic mechanisms. Of everything that Aung San Suu Kyi said in her intervention, one statement made me very fearful. In her closing remarks, Aung San Suu Kyi said that “We pray the [ICJ] to refrain from taking any action that might aggravate the ongoing armed conflict and peace and security in Rakhine.” It is clear that the provisional measures cannot aggravate the conflict. However, the warning is received. The worst may be yet to come.

How Kristin Chenoweth Took Back Her Power

With Terrell Suggs Waived, What’s Next For The Arizona Cardinals?