Roku’s Post-Earnings Plunge May Only Be The Start

Michael Kramer and the clients of Mott Capital own DIS, NFLX, GOOGL

Roku Inc. (ROKU) shares had a wild trading session on February 14, with the equity gapping higher and rising by nearly 8%, only to give back all the gains by the days end, finishing lower by over 6%. On the surface, Roku appeared to report powerful results, beating on both the top and bottom lines. The company even gave a rosy revenue outlook for the fiscal year 2020, but beneath the surface, the trends didn’t seem all that strong, especially given the robust backdrop.

Consider that during the same quarter Walt Disney Co.’s (DIS) Disney+ streaming service launched and added over 26.5 million subscribers. Over the same time Roku’s number of active accounts rose by about 4.6 million, its best quarter ever. However, the growth rate for active accounts has been decelerating, and one must wonder what catalysts are on the horizon for Roku now that Disney+ has launched and will help to support Roku’s lofty multiple. 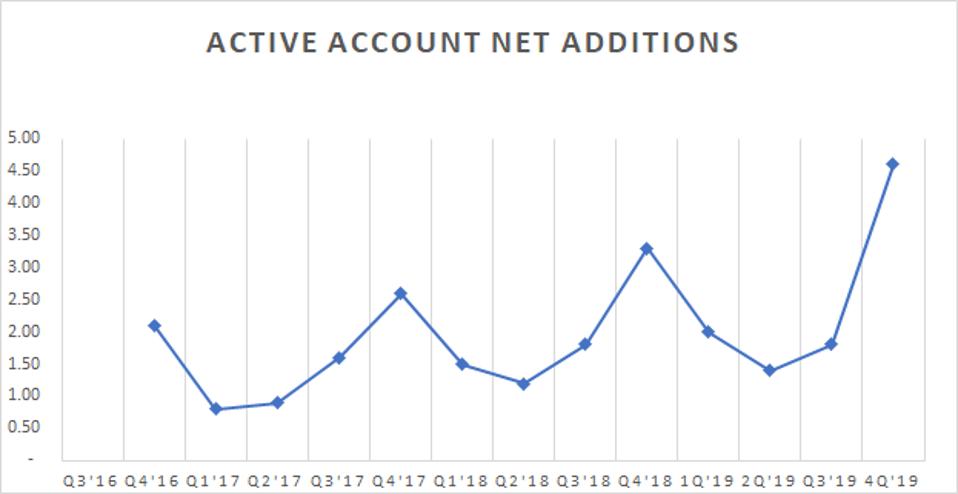 It would seem to suggest that there is a natural rate of growth in accounts for Roku in the fourth quarter versus the previous year’s net additions of about 500,000 to 700,000. If so, then it would seem fair to assume that Roku may have grown net adds naturally by about 700,000 accounts, bringing the total number of new accounts to around 4 million. It could imply that of Disney’s 26 million new streaming subscribers; Roku only saw a benefit of an additional 600,000 new accounts above its natural rate of growth. It seems like a logical question that investors should be thinking about, because it would make the most recent quarterly net additions less than impressive.

Additionally, the average revenue per user (ARPU) rose by a healthy 29% in the fourth quarter to $23.14 versus last year. However, ARPU rose only 2.5% in the quarter sequentially, and that is the slowest sequential rate of growth for ARPU since the fourth quarter of 2016. This, despite the number of streaming hours increasing by 14% sequentially to 11.7 billion. It would seem to suggest that more time spent on the platform does not contribute to more significant revenue per user. 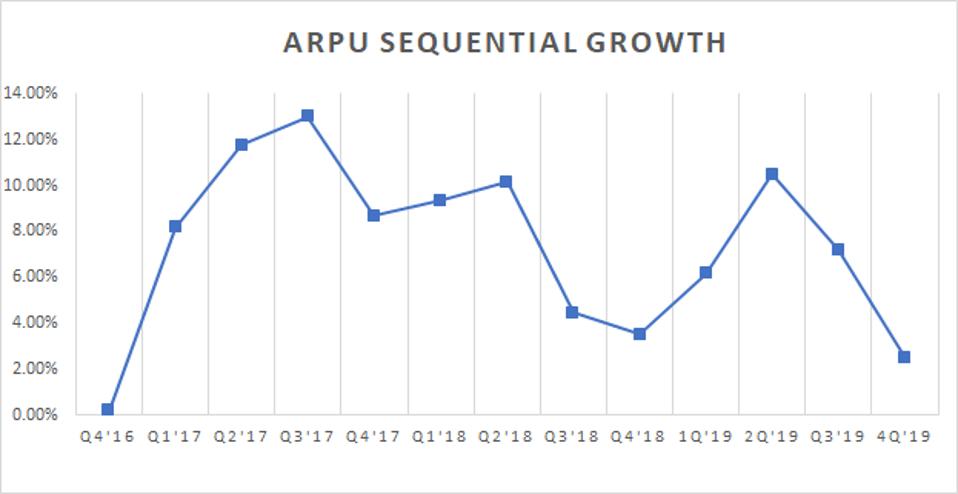 If this is as good as it gets for Roku with the tailwind of a massive quarter for Disney net additions, one must be led to believe that future growth rates for the company may only slow further. It is something that the stock may not be able to afford, considering the shares trade at over 7.3 times one-year forward sales estimates, which is much higher than Disney’s 2.9, Netflix Inc.’s (NFLX) 6.8, Amazon.com Inc.’s (AMZN) 3.2, and Alphabet Inc.’s (GOOGL) 5.5 multiples.

The wild trading action on February 14 seemed to exemplify the market’s nervousness about the stock’s future. The technical chart showed shares trading to a region of technical resistance around $150 and failing to break out. It resulted in the stock falling sharply intraday and bouncing off a level of technical support around a price of $128. It came on a massive amount of volume too, with nearly 64 million shares traded, much higher than the stocks 90 day moving average of 16.9 million shares.

It could still get worse for the stock, should it fall below support at $128, the next significant level of support doesn’t come again until $116 and then at $100. But this is a stock that has proven the skeptics wrong in the past time and time again, and if the bulls remain believers, the stock could just as easily snap higher in the days to come.

Apple AirPods Pro Have Amazing Hidden Feature That Makes Them A Twofer: Worth The Upgrade From AirPods 2