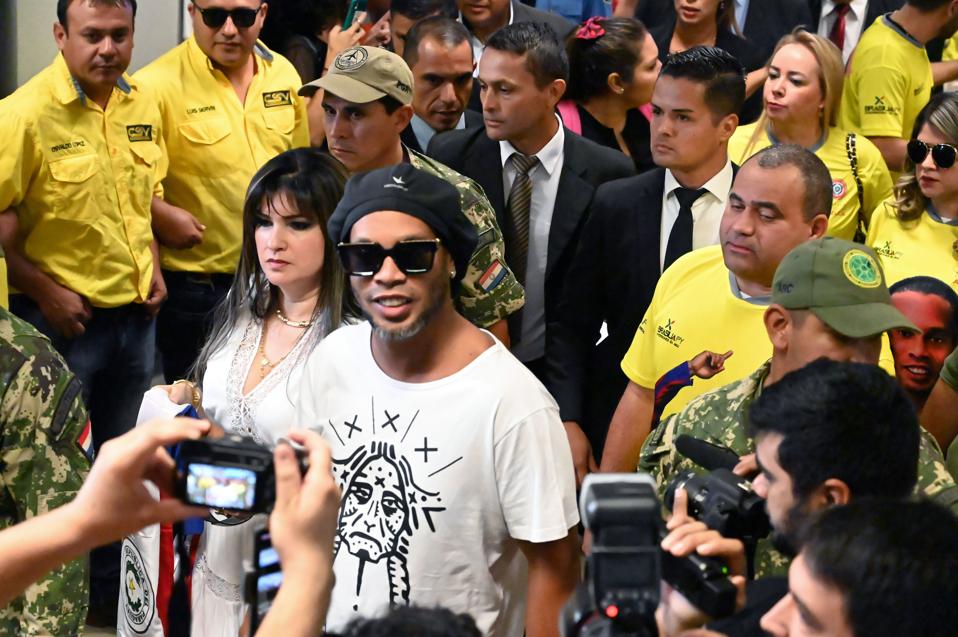 Even in retirement, or indeed incarceration, the silverware continues to roll in for FC Barcelona legend Ronaldinho.

Now, the 39-year-old can add a futsal trophy to the World Cup, Champions League and Ballon d’Or, after helping his team come out on top in a tournament held within the Paraguayan maximum security prison he currently inhabits over the use of false documents.

As has been widely reported, the triumphant outfit was also awarded a 15kg suckling pig for their 11-2 win, with conflicting accounts emerging over how many goals and assists the Brazilian racked up.

Some have it down as five goals and six assists, while others contest that his involvement in the match wasn’t as dominant. Elsewhere, though, video footage has emerged of at least one of his successful strikes.

Earlier in the week, teams across the prison apparently rowed with one another over which would have Ronaldinho on their team, while it was also rumoured that the Gremio academy product would not be allowed to score in the competition’s games.

In any event, the tournament went ahead without incident, with Ivan Leguizamon of local media outlet ABC TV alleging that Ronaldinho would have been part of the side including former football agent Fernando González Karjallo.

According to Paraguayan television, fellow prisoners were left in stitches when Ronaldinho dribbled fallen deputy Miguel Cuevas, behind bars on corruption charges, and put him on the ground in helplessness.

Away from the futsal court, however, matters worsen for Ronaldinho and his brother Roberto, who is also being held in the Asuncion prison.

Their third appeal for a transfer to house arrest turned down, as it was again deemed that the siblings pose a flight risk while Brazil does also not extradite its citizens, police yesterday found 6,000 footballs in the home of entrepreneur Dalia Lopez.

Lopez believed to have supplied the false document, which cost $12,000, the balls contained the exact same photo as found on Ronaldinho’s Paraguayan passport and provided further evidence of a link between the two parties.

Ronaldinho tested for COVID-19 on Friday, it has been suggested that Brazil president Jair Bolsonaro, who appointed him an ambassador for tourism despite being legally unable to own a passport, may put pressure on the Paraguayan government to release his ally.

Thus far, the protests of Minister of Justice and Public Security Sergio Moro have fallen on deaf ears, and, as things stand, it is expected that Ronaldinho and Roberto could be jailed for at least six months until they face trial.

Warning: Are You Using One Of These 20 Dangerous Smartphone PINs?

How Dungeons And Dragons Is Helping Kids Open Up

What Is Really In Your Food? TeakOrigin Guide...

What To Expect From Carlos Ghosn’s Press Conference

Hitting A Wall And Pushing Through

The Week In XR: Is This VR’s Moment?