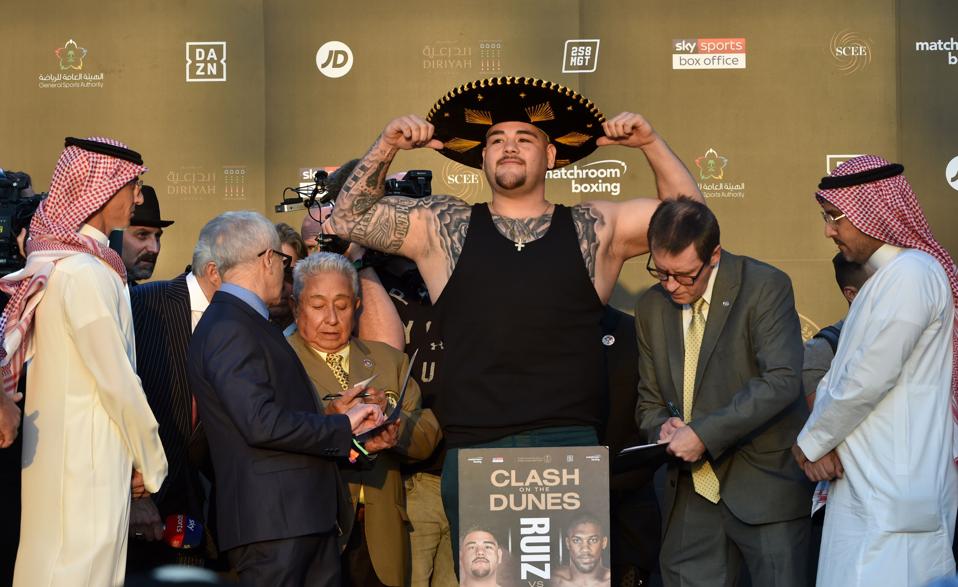 Mexican-American heavyweight boxing champion Andy Ruiz Jr poses during his official weigh-in in the … [+] Saudi capital Riyadh, on December 6, 2019, ahead of the upcoming “Clash on the Dunes”. – The hotly-anticipated rematch between Ruiz Jr and British challenger Anthony Joshua is scheduled to take place in Diriya, near the Saudi capital on December 7. (Photo by Fayez Nureldine / AFP) (Photo by FAYEZ NURELDINE/AFP via Getty Images)

Apparently, that sombrero that Andy Ruiz sports at weigh-ins must be fairly hefty, since the quadruple belt-holder heavyweight clocked in at 283 lbs., or, as breathlessly recorded by the Brits in attendance, some 15 pounds over what he weighed in at when he lifted the belts off Anthony Joshua in June. Ruiz shrugged it off and blamed it on the late weigh-in. He said he had some tacos for lunch and wore the sombrero on the scales and in his immortal words, “probably put on ten pounds.”

Be that as it may, the news in odds is that some money has moved away from Joshua, but enough has moved back in for him so that he’s holding rather steady as the favorite at -250, expressed in American odds, which is an implied 71% probability of winning. Ruiz, the reigning heavyweight champion in four sanctioning bodies, at this moment courts a +188, or an implied probability of winning that grazes 35%.

The theories out of London run counter to the global money in this instance. Joshua’s home audience, in the form of the lovable take-no-prisoners boxing scribes for London’s better Fleet Street gutter organs, are resolutely negative about what sort of fuel and grit Joshua has in his tank tonight. The word is that Joshua was fast-tracked in his career and never learned how, in the immortal words of one scribe, “to fight his way out of a fight.”

That is a telling, spot-on observation of Joshua’s squeaky-clean heroic style, as opposed to Ruiz decidedly grittier, gimme-your-best-shot posture. It’s also why Ruiz was able to get up from his knockdown by Joshua in June and wade in to floor the champion, non-stop, until the fight was stopped.

That quality is called heart. Ruiz — sombrero 10-pound taco lunches and all current 283 lbs. of him — has it in spades. He has shown us that he will get up and go back into the battle. Ergo, it seems that the fault lines of tonight’s fight have been finely drawn, so that the match has taken on the unmistakable mantle of greatness. There’s a huge, technically superior former champion who is dying to get “his” belts back. Opposite him is a scrappy but unstoppable belt-holder who will not buckle, and will not break his grip on the history books.

The mystery remains: Why has the money, even at this last minute, remained so staunchly with the challenger.