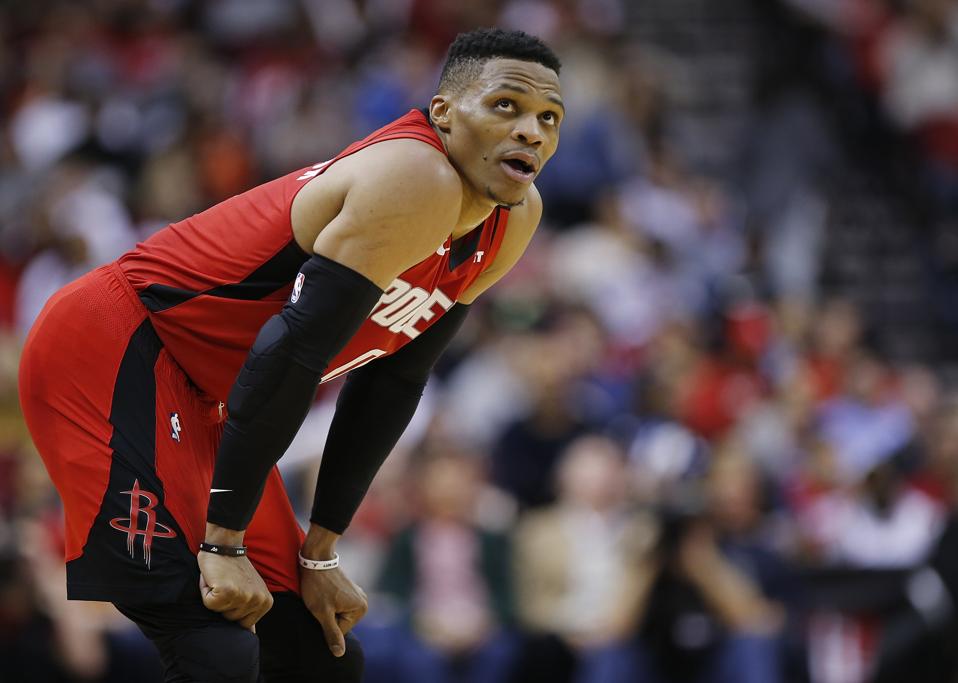 HOUSTON, TEXAS – JANUARY 20: Russell Westbrook #0 of the Houston Rockets checks the scoreboard … [+] during the fourth quarter against the Oklahoma City Thunder at Toyota Center on January 20, 2020 in Houston, Texas. NOTE TO USER: User expressly acknowledges and agrees that, by downloading and/or using this photograph, user is consenting to the terms and conditions of the Getty Images License Agreement. (Photo by Bob Levey/Getty Images)

The Houston Rockets mortgaged their future when they traded two future draft picks, along with the right to two pick swaps, and Chris Paul, to the Oklahoma City Thunder this summer for Russell Westbrook. Coming off of offseason knee surgery, and attempting to acclimate to a new scheme, Westbrook had a shaky start to the 2019-2020 season.

Unfortunately for Houston, this surge of dominance from their All-Star point guard has coincided with the worst shooting slump of James Harden’s career and thus, the production hasn’t translated to the standings. Entering Friday, the Rockets found themselves sitting at just 27-16 and sixth in the Western Conference.

With Eric Gordon back from surgery, the Rockets are fully healthy for the first time all season. Heading into the All-Star break, with Westbrook finally rolling, they hope they can get Harden going again so that they can make a push heading into the postseason. They have to be encouraged thus far by how their new star has found a niche within their offense after an initially shaky start to the season.

Mass Production Of A Self-Driving Restaurant Robot Is Coming

How To Build A Brand Featured On Oprah’s...

How To Prepare For The Coronavirus Work From...