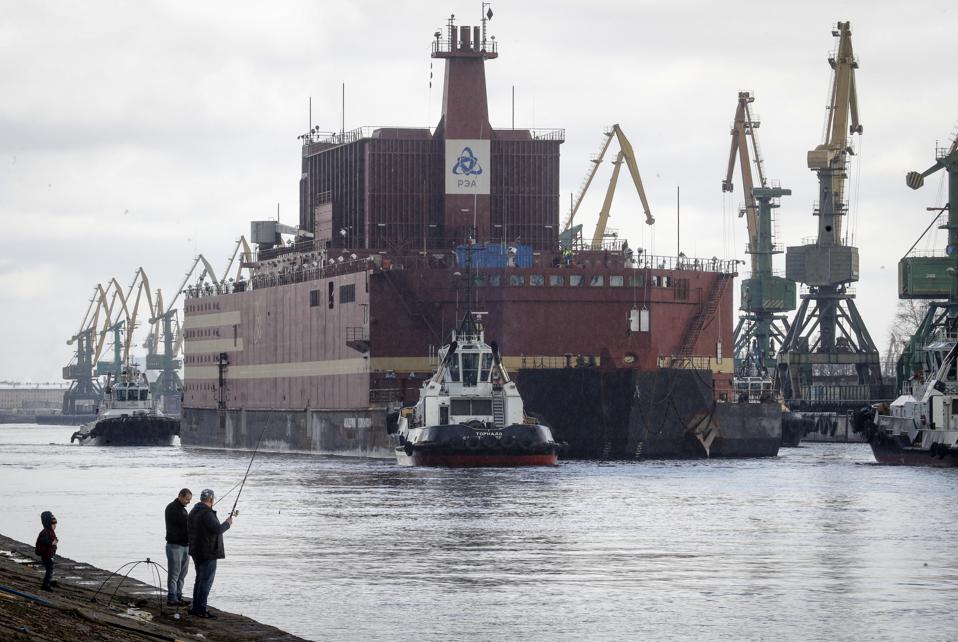 The floating nuclear power plant, the ‘Akademik Lomonosov’, is towed out of the St. Petersburg … [+] shipyard where it was constructed in St.Petersburg, Russia, Saturday, April 28, 2018. The Akademik Lomonosov is to be loaded with nuclear fuel in Murmansk, then towed to position in the Far East in 2019. (AP Photo/Dmitri Lovetsky)

Russia’s first floating nuclear power plant flipped the power switch on Thursday for the first time, delivering electricity from a boat off the coast of far eastern Russia.

The barge, known as the Akademik Lomonosov, took 10 years to build at a cost of $232 million. The unit is enough to power a city of 100,000 people, with the electric generation capacity of roughly 70 megawatts. The barge is off the cold, rocky tundra of Chukota along the North Pacific Ocean, a Russian state with a population of roughly 50,000. The ancestors of the Eskimos, Aleuts and the Chukchi all inhabited the region, now home to more polar bears, reindeer and puffin penguins than people.

The new power plant will replace the technologically obsolete Bilibino nuclear power plant in the region, built in 1974 with the capacity to generate 48 megawatts. And a coal fired power plant as well will also be shut down. Bilibino will be closed before the end of this year.

Next year, the barge will be connected to the main city there, known as Pevek, in order to provide heat. The average high temperature there is -11 Fahrenheit in January and February. Less than 5,000 people live there.

Russia hopes the power plant and all the development and infrastructure maintenance surround it will create conditions for accelerated socio-economic development of Chukotka and will become one of the key infrastructure elements in Russia’s development goals for its northern sea route.

“The task for next year is to complete the commissioning of the facility for fueling commercial operation,” Andrei Petrov, the company’s general director said in a press release.

Since the energy of Chukotka is subsidized, the cost of energy for consumers will not change. 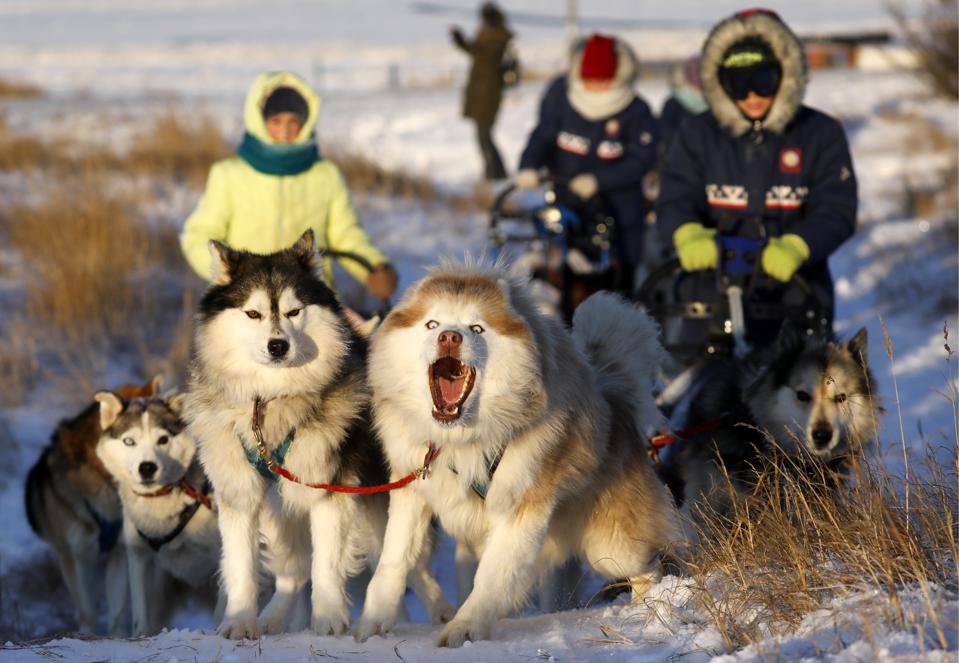 Russia likes to refer to the Akademik Lomonosov as the world’s first floating nuclear power plant. It is, for that part of the world. But in the late 1960s, the U.S. government had their MH-1A Sturgis — also a floating nuclear power vessel – which was used to generate the electricity required for the construction of the Panama Canal.

Besides being the only floating nuclear power plant in the world today, Russia’s Akademik Lomonosov will also be the northernmost nuclear power station once Bilibino is off line.

Nuclear power analysts quoted in niche Russian publications on the subject are saying the new reactors will be the Afrikantov designed RITM-200M pressurized water reactors with a life span of 400 years and a total capacity of 100 megawatts. Rosatom wants to export the technology to Latin America, Africa and Asia, the Financial Times reported.

Rosatom is being tasked with tapping Russia’s nuclear know-how to build alternatives to fossil fuels, not only at home, but around the world. 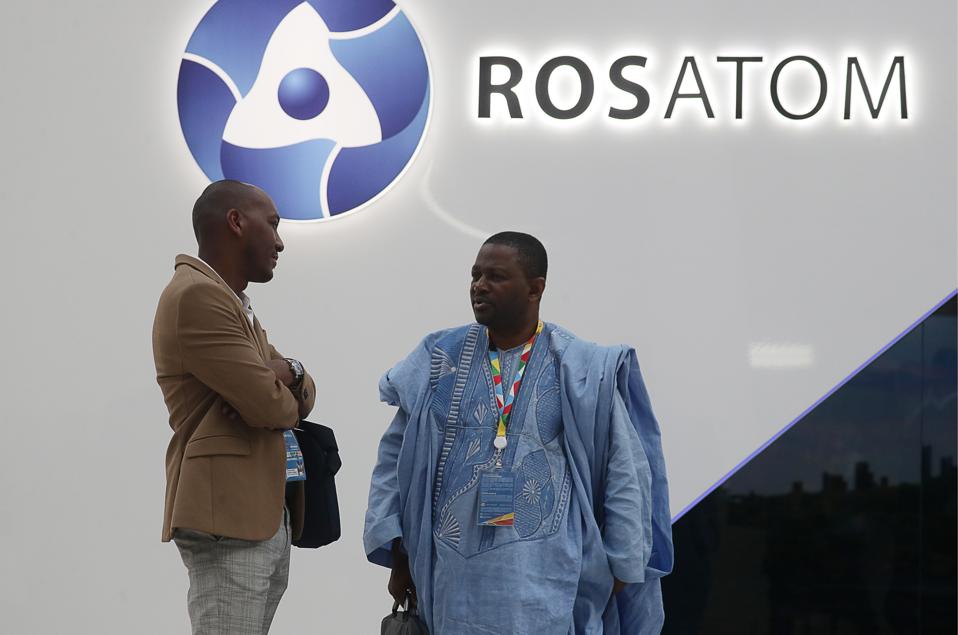 Participants at the 2019 Russia-Africa Summit and Economic Forum. Rosatom wants to export the … [+] floating nuke model to developing countries in Africa, LatAm and Asia in a bid to move away from fossil fuels.

It has few competitors in this space. China is building large nuclear reactors. And the U.S. is currently working on smaller nuclear power plants, despite opposition from environmental groups that want to stick with wind and solar. Floating nuclear power plants are something Russia adds to the mix of new nuclear technologies.

Rosatom made headlines in August after an explosion occurred at a military training ground during the testing of a jet engine. Five Rosatom employees were killed and three others were injured.

The accident led to the usual call for pause on nuclear development, with discussions centered on safety and nuclear waste.

Vladimir Chuprov, head of Greenpeace Russia’s energy program, said bringing the barge off the pristine coastline of Chukotka is an accident waiting to happen. Chuprov said the risks of radiation accidents were too high.

The region is already powered by nuclear energy. And coal, of which Greenpeace blames for the ‘climate crisis.’ They have advocated worldwide for the end of coal mining.

The reactor plant was set up in stages in order to make tests of the plant’s equipment incrementally, the company said.

Greenpeace isn’t happy. “The problem of nuclear waste remains,” says Chuprov in a report published in business daily Vedemosti on Thursday. “This high-powered station means it will be impossible to develop wind and solar generation in this area.”

Got A Remote Tech Team? 14 Tips For Building Camaraderie

The World’s Best Banks: The Future Of Banking...

Elon Musk Threatens To Pull Tesla Out Of...