Breaking
Can Money Protect You From Covid-19? It May...
The Most Important Voice In Artificial Intelligence: Frontline...
Amazon’s Small Business Empowerment Team Is Helping Entrepreneurs...
10 Ways For Entrepreneurs To Power Through Tough...
Will The Cloud Take Down The Mainframe?
How Itamar Medical Stock Could Triple
How To Cash In On Biden’s Stimulus With...
The Refactoring X-Factor Behind Software Modernization
3 Habits Of Millionaires
Will The Stock Market Sell Off As Biden...
Microsoft Reverses Xbox Live Gold Price Increase Following...
Weekend Favs January 23
FDA Approves First Monthly Injections To Treat HIV
Low Volatility Investing Works In China Too
How 2020 Introduced Big Technology Startup Opportunities
Apple Loop: Stunning iPhone 13 Decision, Shock New...
Home Technology Salads in Space
Technology 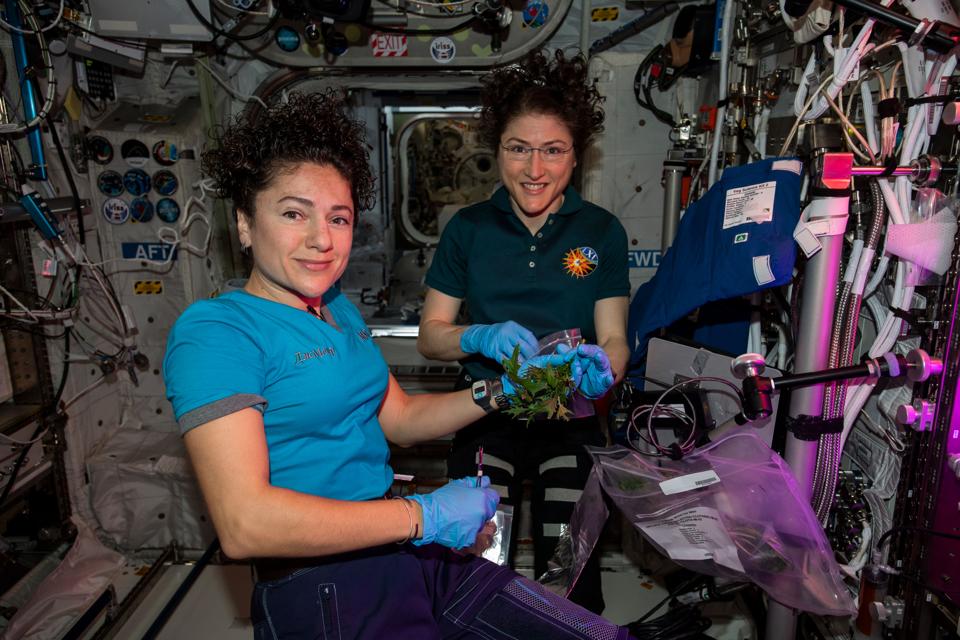 NASA astronauts Jessica Meir and Christina Koch harvest a crop of Mizuna mustard greens grown for … [+] the Veg-04B investigation, part of a phased research project to address the need for fresh food production in space.

If you’re an astronaut living on the International Space Station, you get regular shipments of freeze-dried and prepackaged food. Then to eat it, you have to add water to the dehydrated food or just add hot water to have hot food. When a resupply vehicle comes up, it brings fresh fruits and vegetables. But what happens when crews venture further into space, traveling for months or years without a resupply shipment?

Eating the same food over and over again gets boring. So boring that NASA is now studying food acceptability and menu fatigue. Whether or not the crew members like the food enough to actually eat it effects caloric intake and nutrition. On top of that, vitamins in prepackaged food break down over time, which presents a problem for astronaut health on long-duration flights to let’s say, Mars.

So astronauts are experimenting with growing crops in space. Space gardening adds fresh food to the astronauts’ diet, but on top of that, the researchers are also finding out that taking care of the plants in space enhances the astronauts’ happiness and well-being. Turns out gardening is fun and relaxing no matter where you do it.

The Vegetable Production System space garden on the space station is called Veggie. Veggie is a simple, low-power system that grows fresh, nutritious pick-and-eat salad-crops. It’s about the size of a carry-on suitcase and holds six plants. Each plant grows in a “pillow” filled with a clay-based growth media and fertilizer that helps distribute water, nutrients and air in a healthy balance around the roots. Without the pillows, the roots would either drown in water or be engulfed by air because of the way fluids in space tend to form bubbles.

Since plants reflect a lot of green light and use more red and blue wavelengths, the light emitting diodes (LEDs) above the plants that produce the spectrum of light suited for the plants’ growth glows magenta pink. 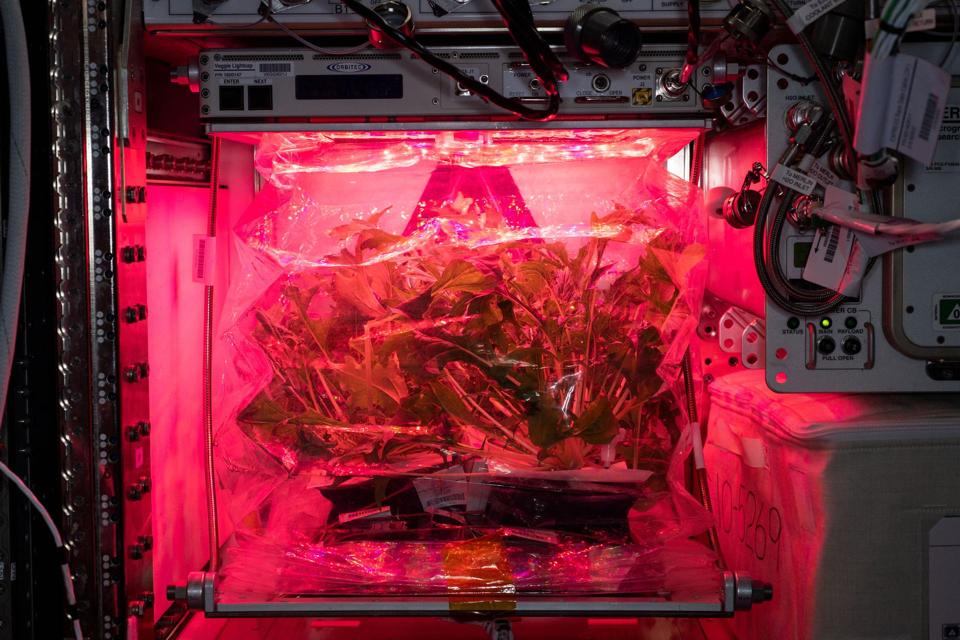 Mizuna Mustard mustard greens, part of the Veg-04A experiment, growing in a Veggie plant growth … [+] chamber aboard the International Space Station on July 9, 2019. The Veg-04A experiment tested the greens, grown in blue-rich lighting and red-rich lighting, to determine the effects of different light ratios on plants grown in space on the station. The on-orbit harvest took place July 9, 2019.

The current Veggie research focuses on the impact of light quality and fertilizer on leafy crop growth for a 28-day grow-out. Six plants are grown using the plant pillows in each of the two Veggie units aboard the International Space Station. Crew members tend to the plants by opening wicks to help seedlings emerge, providing water, thinning the seedlings, and monitoring health and progress, which includes taking photos to send to the ground team.

The investigation calls for half of the crop to be frozen and returned to Earth for analysis and for the other half of the crop to be weighed and eaten by the crew. Throughout the investigation, crew members assess how much they enjoy interacting with the Veggie system and how it impacted their mood. The astronauts also conduct fundamental space biology experiments with the Veggie gardens to study plant growth in microgravity.

Veggie has successfully grown a variety of plants, including three types of lettuce, Chinese cabbage, mizuna mustard, red Russian kale and zinnia flowers. The Veggie team also developed produce-sanitizing citric acid based wipes for cleaning the leafy greens since there’s no way to cook on the station yet.