Breaking
The Ultimate Guide to Saving Money
Lights, Camera, Action—Is There A Post-Covid Future For...
7 Ways to Reduce Human Errors in Your...
How ‘Couples Therapy’ Used Technology To Cope With...
Can You Settle Your Student Loans Or Negotiate...
How to Use Amazon Attribution For Ad Campaigns
What are the Makings of a High-Quality Link?
How To Quickly Start And Scale Your Business
Terra Virtua: What NFTs Can Teach Us About...
5 Easy Steps To Prepare Content For E-A-T...
Physical Inactivity Linked To More Severe Covid-19 Infection...
The 2021 Estimated Tax Dilemma: What Tax-Return Pros...
Want To Digitally Transform Your Business? Start With...
How to Optimize Google My Business and Leverage...
Debunking Link Building Myths in 2021
How, When And Where You Can Gaze At...
Home Technology Salesforce Bringing Voice To The Workplace
Technology

The recently held Dreamforce mega conference in San Francisco revealed Salesforce’s plans to introduce their Einstein Voice Project. During this annual event, the spokesperson of Salesforce along with Bret Taylor, the Chief Product Officer, revealed the company’s plans related to their advanced and certainly unique voice assistant.

Einstein Voice might seem like nothing but another voice assistant out there, much like Google Assistant or Alexa. However, Einstein Voice has a more specific and far more focused mission – to improve data accessibility and communication in corporate environments. 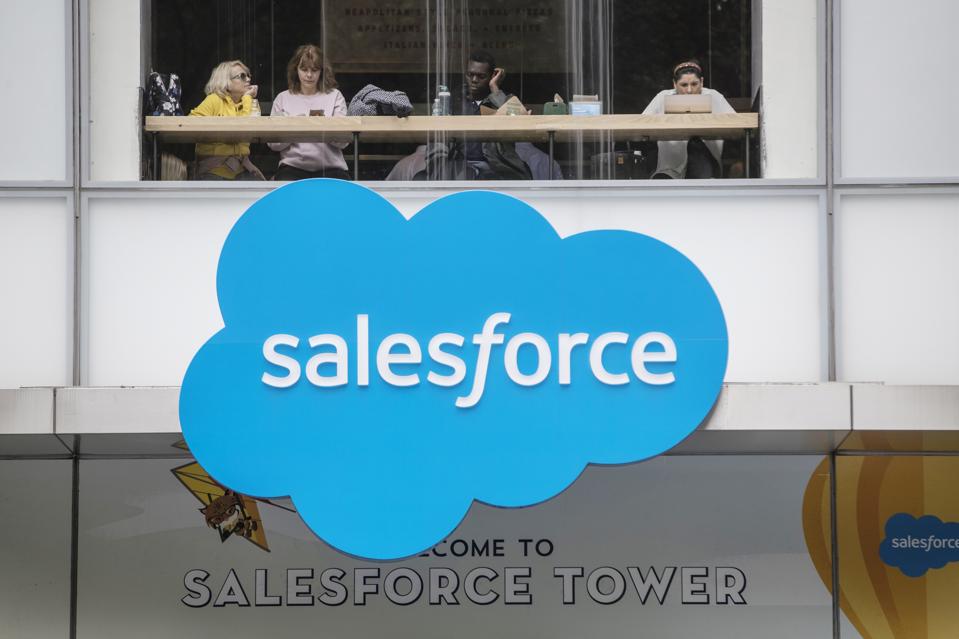 People sit inside in the Salesforce Tower in New York, U.S., on Thursday, May 30, 2019. … [+] Salesforce.com Inc. is scheduled to release earnings figures on June 4. Photographer: Victor J. Blue/Bloomberg

The Einstein Voice assistant speaker looks like the original Salesforce Einstein figure with several cool features. For instance, its voluminous white hair lights up each time the assistant answers your questions.

The aim behind it is to allow salespeople to access data quickly and on the go. A tool like this could bring lots of advantages to businesses whose success depends on data accessibility and the performance of sales teams.

For example, the Einstein Voice assistant will get a “seat at the table” at corporate meetings or sales events where users will be able to ask the system a question and get a quick and brief response from the database.

Besides allowing easier access to wide databases, the Einstein Voice device must account for the security needs of the enterprises that are going to be using it. The security aspect of the product is still a challenge, even though the company is working toward fully securing the device.

Salesforce and Their Plans for the Future

Even though Salesforce is not planning to make their voice assistant available to the public just yet, they are working with industry giants such as Google and Amazon on the integration side.

The real mission behind the Einstein Voice is to bring this convenient tool closer to businesses in any niche or industry. Therefore, the unique cartoon figure will eventually become a widely used tool even outside Salesforce meetings and offices.

Moreover, Einstein’s capabilities are currently limited to simple skills such as data input and simple queries. However, the company is expecting to further improve and update their voice assistant to meet the needs of a wide variety of enterprises.

“We’re really excited about the idea of voice in businesses — the idea that every business can have an AI guide to their business decisions,” said Taylor, the Chief Product Officer at Salesforce.

“I view it as part of this progression of technology. Computers and software started in the terminal with a keyboard, thanks to Xerox Parc moved to a mouse and graphic user interface, and then thanks to Steve Jobs, moved to a touchscreen, which I think is probably the dominant form factor for computers nowadays. And voice is really that next step,” Taylor added.

Another recently launched Salesforce service announced at the Dreamforce event is Cloud Voice, which allows Einstein to listen to calls in teal time and provide relevant information to sales teams and call center agents.

Altogether, Salesforce is proudly moving toward the next step of the process, which is the introduction of Einstein Voice to giant corporations and the improvement of its skills and capabilities.