Breaking
Time For IMF Climate Coin (1/3)
Why Getting On TV Is Your Best Marketing...
Ask Larry: Can I Take My Social Security’s...
Students Can Get Hulu For Just $1.99 Per...
Documentary Calls Out Stereotypes, Issues Urgent Call-To-Action For...
The Best Preferred Stocks For 2021
China’s Rare Earths ‘Slump’ A Sign Of Domestic...
5 Ways To Promote Team Wellness This Winter
How To Refresh Your Business Ideas In The...
Yelp Is Now Accepting Covid-19 Safety Reviews …And...
What You Should Consider Before Entering An Intrafamily...
The Hidden Drag From The S&P 500 That...
The Flawed Inflation Narrative; And “V” vs. “U”
How, When And Where You Can See A...
Why You Should Stop Using Your Facebook Messenger...
IRS Collections Appears To Be Broken
Home Finance Salesforce Stock: SaaS Juggernaut Must Evolve
Finance 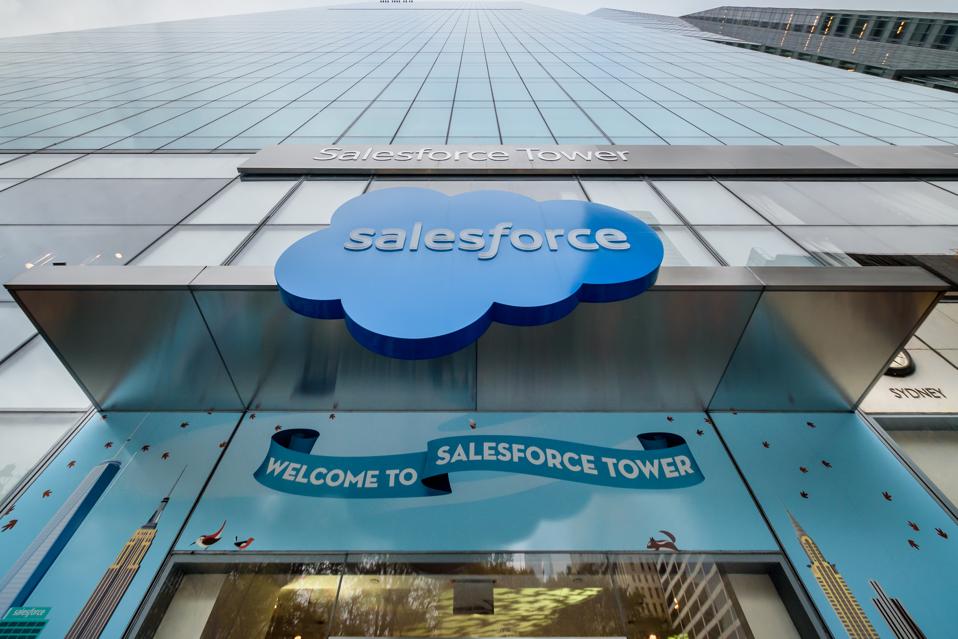 Slowing growth and lowered EPS guidance could become the new norm if the company does not diversify its software-as-a-service strategy to meet the on-premise needs of high-spending enterprise companies.

The question Salesforce must answer, especially in the aftermath of large acquisitions, is if the company can reinvent itself to capture more of the addressable market — or, will the company continue to enhance its current software-as-a-service (SaaS) and platform-as-a-service (PaaS) cloud offerings for future growth?

The latter may not be enough to stave off competitors as cloud software and platforms evolve to meet the needs of on-premise enterprises.

Cloud is Evolving, and Salesforce should too

Previously, Salesforce has demonstrated a singular focus on cloud. Similar to an over-developed muscle, this may become its weakness. According to the 2019 State of Servers survey by Spiceworks of more than 500 IT decision makers, 98% of enterprises run on-premise server hardware.

Market research firm IHS Markit reported “a growth phase” was coming for on-premise servers and hybrid strategies, with 151 North American organizations planning to double their physical servers in 2019. According to IHS, a good portion of on-premise data center capacity is going to productivity apps, collaboration tools and unified communications — which is Salesforce’s sweet spot.

Business intelligence shares many of the same functions as customer relationship management (CRM). As stated in the 2019 State of Cloud Business Intelligence, small organizations of 100 employees or less are the most enthusiastic, perennial adopters and supporters of business intelligence.

Smaller companies being a main driver for cloud could be one reason we see a divergence between statistics on cloud software penetration and overall IT budgets. For instance, 83% of enterprise workloads will be in the cloud by 2020, 91% of businesses use the public cloud and 72% use a private one. However, only 30% of IT budgets were allocated to cloud computing in 2018.

According to these studies, nearly half of enterprises are either using hybrid cloud computing or are using on-premise servers. Therefore, Salesforce may need to expand beyond cloud to capture the remainder of IT budgets.

Examples of industries that may never rely fully on the public cloud or private cloud (and will retain some data on-premise) include the government, energy companies, gaming companies with valuable IP, health care companies and pharmaceuticals, and many others who have sensitive information and are held back from sending data to a vendor.

The best SaaS and PaaS solutions for these companies can work across data no matter where it resides rather than forcing the data into a public or private cloud.

Salesforce has been on an acquisition spree lately, yet two, in particular, stand out for the potential to diversify Salesforce’s overweight in SaaS.

Tableau was acquired by Salesforce for a large price tag of $15.7 billion. The data visualization company helps non-technical people make sense of data. The company was founded in 2003, the same era as Salesforce, with a focus on desktop software, which seemed counterintuitive to the cloud hungry tech space of the early 2000s.

Tableau illustrates the importance of on-premise tools, as more than two-thirds of its 86,000 customer base are on-premise customers. Most certainly, this acquisition could help to diversify Salesforce to serve broader customer needs.

Ideally, Salesforce makes the most of this acquisition by leveraging the on-premise software and legacy systems client base rather than forcing a cloud-only narrative.

Similar to Tableau, SalesForce stock dropped 5% when the news was announced in March of 2018. Thus far, MuleSoft has contributed $451M in revenue over the past year and $181M in revenue in the most recent quarter.

Over the past decade, Salesforce has been a 10-bagger, and continues to exceed 20% revenue growth over the past two years. Salesforce gains see-sawed for most of 2019 with little to no gains, yet the stock has risen nearly 20% over the past three weeks.

These valuations require some level of confidence in the company’s ability to grow despite a thriving cloud software market with many new software companies going public that are valued at over $10 billion. The current PE ratio is at 196 while the forward PE ratio is at 63, which is quite high for a company that has been public for fifteen years and has been profitable for over the past five years.

These PE ratios are 400 higher than Adobe and nearly 700% higher than Microsoft. Prior the lowered guidance and stock price rally in early 2019, Salesforce had a 200% higher PE ratio than Adobe. 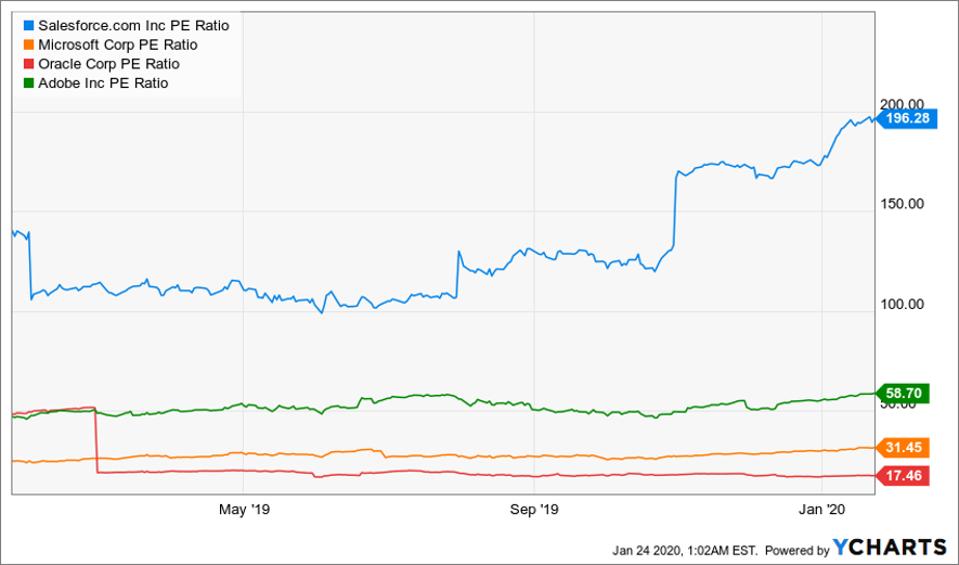 Image source: Ycharts: Although Salesforce has had 2x higher PE ratio than many of the larger cloud companies, CRM now has a PE ratio that is 4x higher than Adobe and other peers. 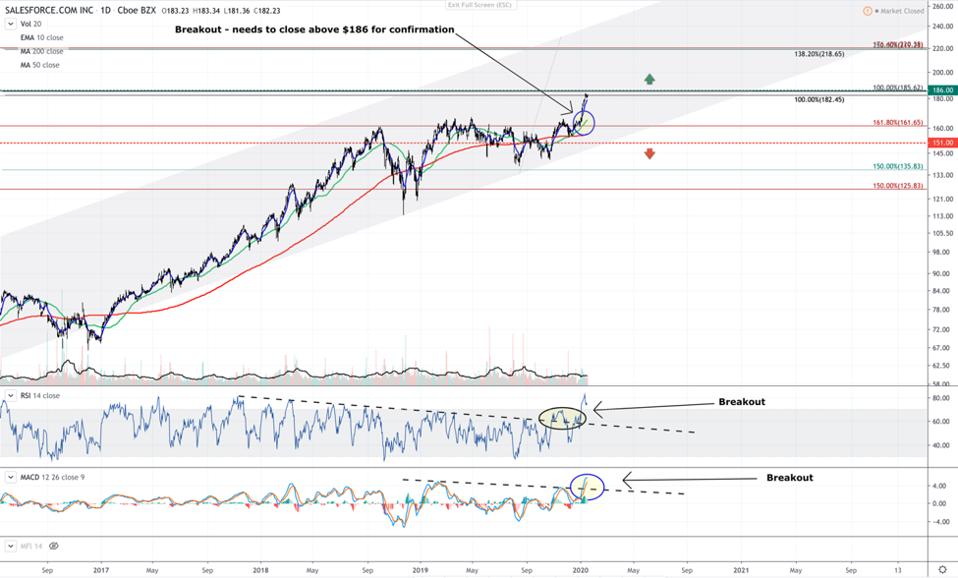 Salesforce (CRM), has broken out from the $162 price range, which has been a significant zone of resistance since 2018. This move is confirmed with the internal momentum indicators breaking out, as shown by the MACD and RSI. Further strength is shown by Salesforce being well above its 50-day and 200-day SMA, as well as above the more short-term 10-day EMA.

The stock needs to be further monitored to determine if this is the extent of the breakout, if this is a bull trap, or is this the real thing.

If CRM can close above $186, this will help solidify the thesis of a breakout and the stock will be looking up towards the $218-$220 price cluster as the next zone of resistance to watch. If Salesforce cannot hold the $151 support, then there could be a retesting of $135.

Science Fiction And Fantasy Magazines In 2020: Readership Is Healthy But Revenues Aren’t