Breaking
Three Essential Components of a Successful Small Business
Pandemic Pet Adoptions Add To Chewy’s Tailwinds, But...
How to Use LinkedIn’s Social Selling Index Like...
Strong Revenue Trend Could Drive EXACT Sciences Corporation...
9 Things To Know Before Starting A Business
‘Game & Watch: The Legend Of Zelda’ Will...
The 9 Fundamental Components Of A Startup Pitch...
How to Get Results from Broken Link Building
Florida Supreme Court Tells The American Bar Association...
How to Write Perfect Paid Social Media Marketing...
How Restaurants Can Design a More Sustainable Food...
Expenses That Small Business Owners Need to Be...
How You Can Make Saying Goodbye To The...
Biden To Meet Royal Family At Cornwall’s Eden...
It’s Going To Be Emotional — Going International...
Peer Mentoring For Students: STEM & Buds
Home Technology Samsung Galaxy Fold 2 Could Borrow Key Note 20 Feature
Technology 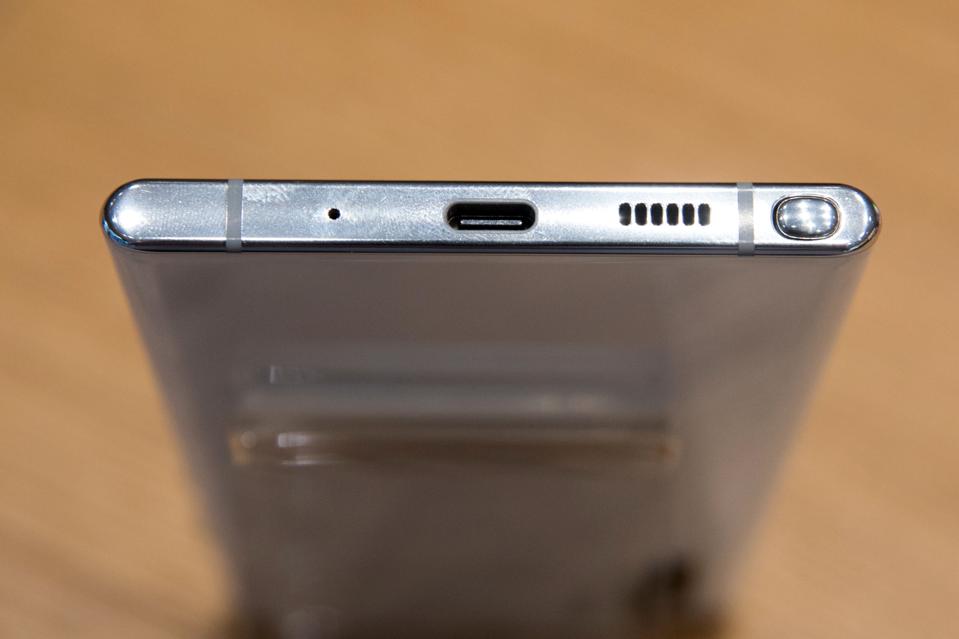 A USB-C port sits on the bottom of a Samsung Electronics Co. Galaxy Note 10 smartphone displayed at … [+] a preview event in London, U.K., on Monday, Aug. 5, 2019. Samsung announced the Galaxy Note 10 in New York today, in a choice of two sizes and with or without 5G, as it tries to arrest sliding smartphone profitability. Photographer: Chris Ratcliffe/Bloomberg

The Samsung Note’s most iconic, device defining, feature – the S Pen – could make its way to the Galaxy Fold 2 according to a new patent. That, or Samsung is toying with the idea of combining the two devices.

The patent essentially describes a future foldable phone – similarly shaped to the original Galaxy Fold – that also supports a stylus, which is neatly hidden under one side of the display with a new docking system.

There also appears to be some improved display features including an “elastic unit”, which uses tensile force to stretch the screen and remove any fold creases. This issue plagued the original Galaxy Fold, but was less of a problem in the Galaxy Z Flip, which used a new ultra thin glass (UTG) display. A new “elastic arm” and “restricting arm” also uses similar logic to keep the device flat when unfolded.

We can expect small but significant improvements on the original Galaxy Fold that fix problems reviewers picked up in the first round of reviews. This patent sheds some light on how Samsung plans to do exactly that with a smoother display and potentially a fully flat foldable phone.

But what’s missing is where this device fits into the larger lineup of Samsung phones. Could Samsung combine the Note and Galaxy Fold at some point down the line?

There’s good reason to suspect the Korean company could do just that. Both devices are launched at a similar time and they operate in a similar phablet space. The Note series has also lost some of its individuality since Samsung’s S series started increasing in display size – especially with the arrival of the S20 Ultra. Outside of the S Pen, there isn’t much to differentiate between a Note and a Galaxy S.

That, of course, would dramatically change with a foldable Note phone. The original concept of the Note was to offer a more productivity focused experience on a larger screen with a stylus that provides another level of dexterity. Sound familiar? The Galaxy Fold delivers on that promise far better than the current Note range does.

As it stands the current Samsung flagship and upper mid-tier range is bloated. The Korean company didn’t release a budget “e” version this year and instead opted to cut the prices of the S10 range and introduce a super high-end Ultra phone into the S20 lineup. Earlier this year it also released a new Note 10 Lite just a few months after launching the Note 10 and Note 10+. Alongside the two new foldable phones, excluding the S10 range, that’s eight flagship devices in a year.

Some streamlining needs to happen (Evan Blass’ sources say that may very well happen) and replacing the Note series with a more modern take on its original mission statement could make the most sense.

6 Ways To Protect Your Business During The Coronavirus Outbreak