Breaking
The Ultimate Guide to Saving Money
Lights, Camera, Action—Is There A Post-Covid Future For...
7 Ways to Reduce Human Errors in Your...
How ‘Couples Therapy’ Used Technology To Cope With...
Can You Settle Your Student Loans Or Negotiate...
How to Use Amazon Attribution For Ad Campaigns
What are the Makings of a High-Quality Link?
How To Quickly Start And Scale Your Business
Terra Virtua: What NFTs Can Teach Us About...
5 Easy Steps To Prepare Content For E-A-T...
Physical Inactivity Linked To More Severe Covid-19 Infection...
The 2021 Estimated Tax Dilemma: What Tax-Return Pros...
Want To Digitally Transform Your Business? Start With...
How to Optimize Google My Business and Leverage...
Debunking Link Building Myths in 2021
How, When And Where You Can Gaze At...
Home Technology Samsung Unveils New Ultra-Curvy, High-Performance QLED Gaming Monitors
Technology

While curved TVs had a brief moment in the sun (and, oddly, were responsible for the most widely read article I’ve ever written), these days they’ve pretty much disappeared. When it comes to gaming monitors, though, the curve is very much in vogue. So much so that Samsung – the ‘inventor’ of the first curved TVs – has just announced a new range of gaming monitors that take curved screens to a whole new level.

The Samsung G9 and G7 Odyssey gaming monitors, which will be on show at the CES next week, all feature curvature levels of 1000R. Which, as you can see in the photographs accompanying this article, amounts to some pretty serious bend. While curved TVs struggled to persuade consumers of their usefulness, there’s no doubting the point of these heavily curved monitors. They wrap around your ideal gaming seating position so that their images naturally fill your peripheral vision. 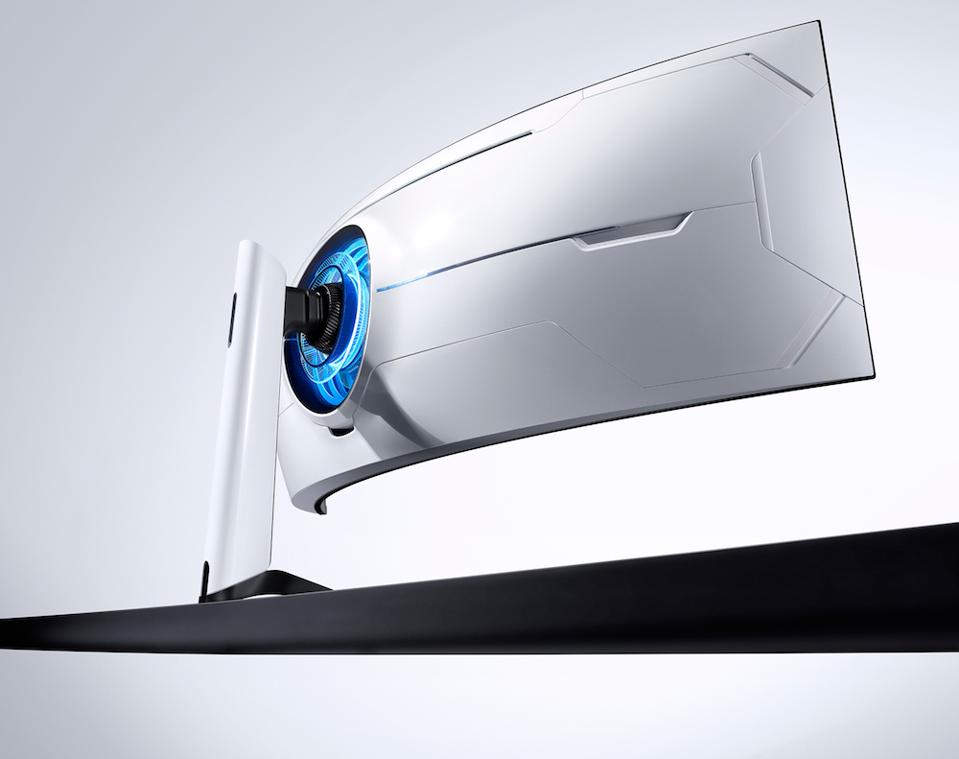 This is especially true with Samsung’s flagship 49-inch G9 model, which boasts an ultra-wide shape and claims to be the world’s first Dual Quad High-Definition (5120×1440-resolution) monitor to feature a 240Hz refresh rate, a 1ms response time, a 32:9 aspect ratio, a 1000R level of curvature, and a peak brightness of 1000 nits. It also features Samsung’s QLED Quantum Dot technology for delivering wider colour gamuts and enhanced brightness, and can, of course, support high dynamic range gaming.

As if the G9 monitor’s unique shape didn’t already make it eye-catching enough, it also boasts a gorgeous glossy white finish offset on the rear by a futuristic-looking ‘infinity core’ feature that can glow with 52 colours and five lighting effect options.

I’ve actually had the chance to see a G9 already, and can confirm that it’s even cooler in the flesh than it looks in the images included in this article. 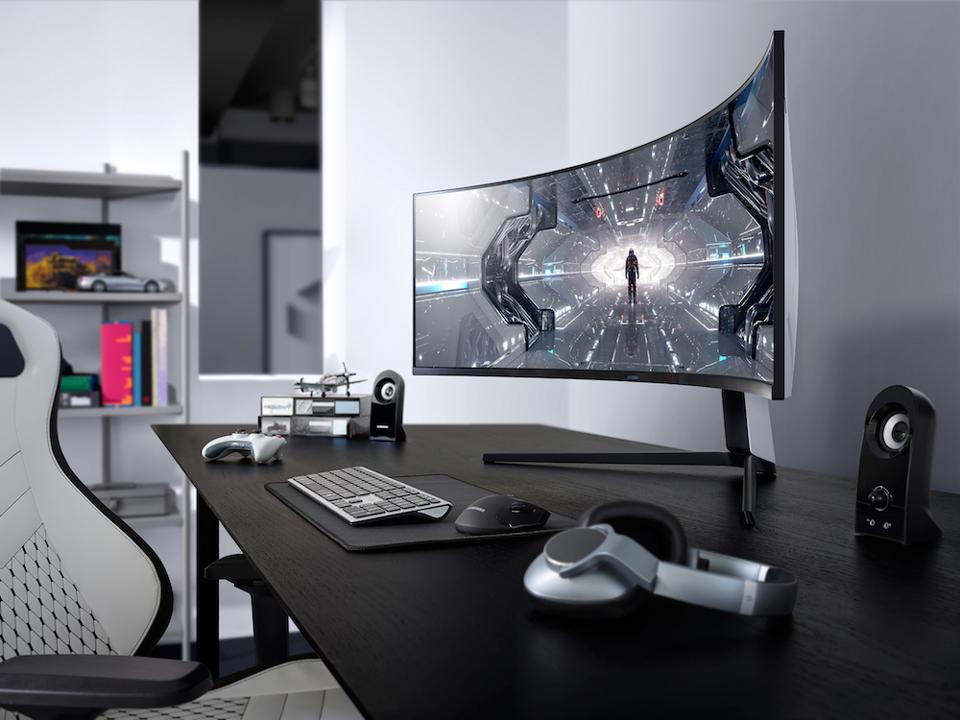 The business side of the Samsung G9 gaming monitor.

Both G7s feature matte black exteriors offset, again, by color-changing rear core lighting that can be set to remain static or dim while you’re playing. The bezels of these monitors also feature dynamic shapes and lighting. 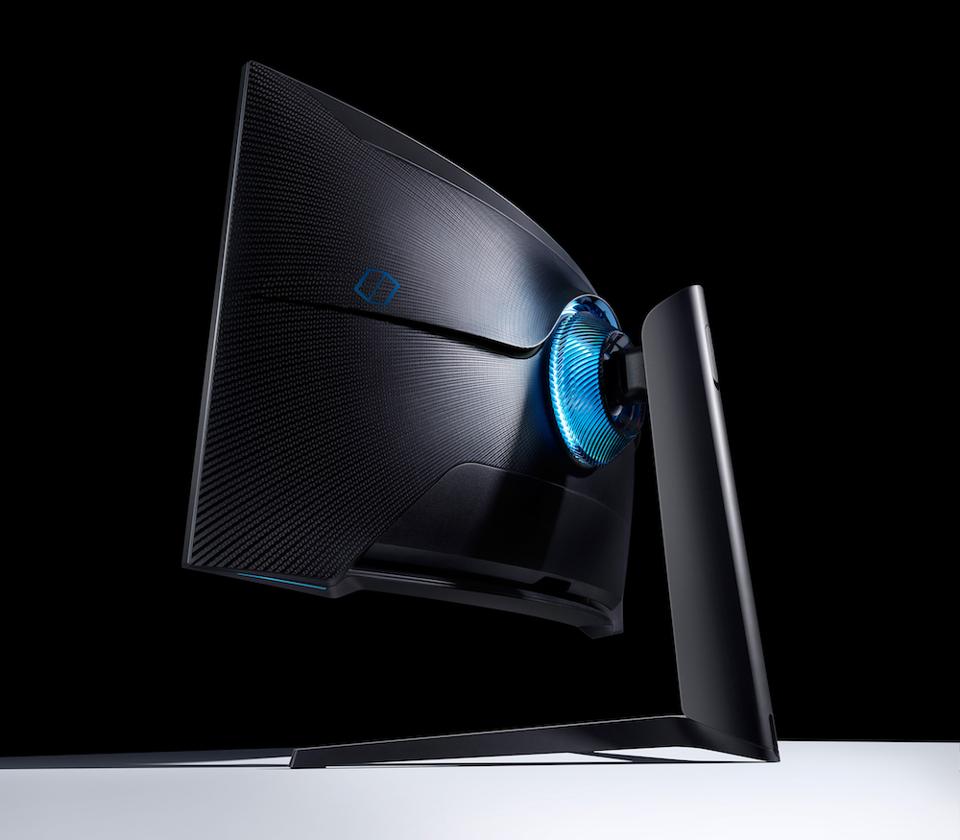 All three of Samsung’s new Odyssey monitors support NVIDIA G-Sync compatibility and Adaptive Sync. They also use VA panels, meaning they should deliver superior contrast to the IPS panels used in some rival monitors (and VA’s usual viewing angle limitations should essentially be rendered redundant by the screens’ curved designs).

The G9 and G7 Odyssey monitors monitors will be available in Q2 2020, pricing TBA.