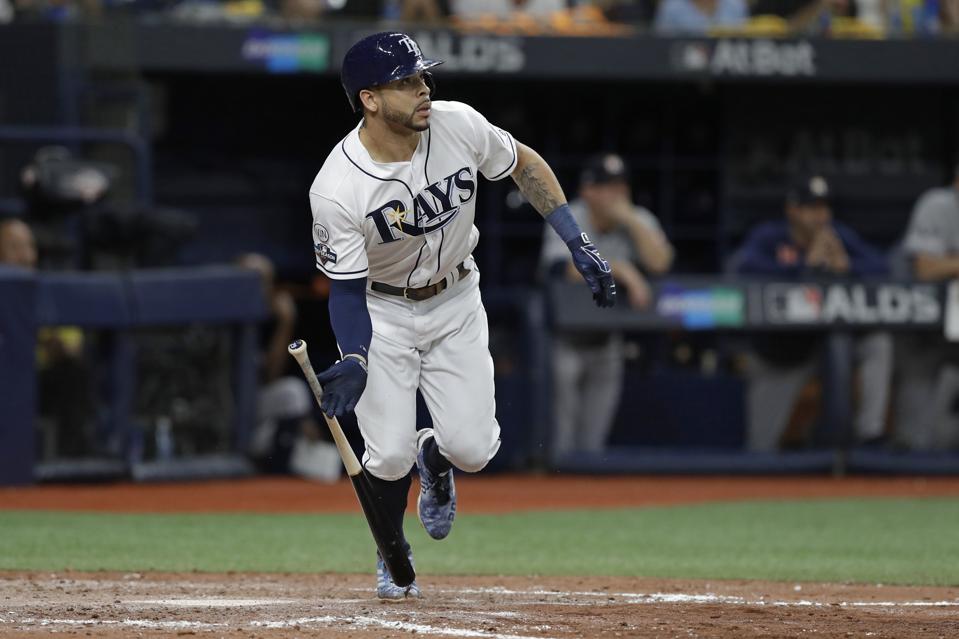 Tommy Pham is on his way to the San Diego Padres after being traded by the Tampa Bay Rays. (AP … [+] Photo/Chris O’Meara)

Depending on your perspective, the San Diego Padres are either a team ready to blossom into a perennial contender, or a struggling squad that couldn’t even fight their way up to the National League’s crowded middle class. After making a big signing each of the last two offseasons, and a number of top prospects getting their first taste in 2019 or knocking on the door for 2020, now is the time for San Diego to start justifying the hype. They got a big boost in that quest with the acquisition of Rays’ outfielder Tommy Pham and prospect Jake Cronenworth for outfielder Hunter Renfroe and prospect Xavier Edwards (at the time of writing, the deal is pending a medical review of the players involved).

Pham is a dynamic player, who offers power, speed, contact and patience. Those last two attributes were especially lacking for the Padres last season. Their team 8.4% walk rate was in the lower half of the league, and their collective .238 batting average was third worst in all of baseball. Pham’s .369 on-base percentage in 2019 was higher than every Friar not named Fernando Tatis Jr. (among players with at least 100 plate appearances). He was also better than every other non-Tatis Padre in wRC+, which measures total offensive output (park adjusted). His 25 steals would have led the team. He will be the sort of threat the Padres lacked at the top of the lineup last season. At an estimated $8.6 million in his second arbitration year in 2020 (according to Roster Resource), and a raise on that next year, Pham offers good value for his production.

Value like that isn’t free, of course. The Padres gave up Hunter Renfroe, who adds value with his massive power and excellent outfield defense, but has weak on-base skills. Edwards is a well-regarded shortstop prospect, but is likely at least a year away and expendable in the Padres loaded system. He is lightning fast, has hit above .300 in single-A, but hasn’t played above that level and hasn’t shown much power. The move also saves the Rays some cash – Renfroe is entering his first year of arbitration and will make an estimated $3.4 million.

In the near-term, however, the Padres have upgraded their team. Between Pham, Tatis Jr., last offseason’s mega-signing Manny Machado, and another recent outfield trade acquisition Trent Grisham, the Padres have a solid core to their lineup. If they can get a bounceback out of Jurickson Profar, who they acquired from the Oakland A’s, and some continued growth from young players like Manny Margot and Francisco Mejia, their lineup will have enough length to keep pitchers from relaxing once they get past the first five.

At 25, Cronenworth is five years Edwards’ senior and doesn’t have the same kind of pedigree, but he just had his best minor league season, so that makes him something of a lottery ticket. He can also apparently pitch, though it’s not clear if the Padres hope to have him continue developing that side of his game.

The Padres gave up long term value for two years of Pham, but General Manager A.J. Preller wants to win now, because winning feels good and so does keeping your job. If healthy, Pham will be a key piece of a Padres team that wants to at least be in the wild card fight in 2020, and challenge for the division by 2021. If there is October baseball in San Diego next year, this trade may be a key reason why.

Finance Executives Regained Confidence In The U.S. Economy For 2020

Lead By Example To Teach Resilience To Team...

The Savvy Moves to Make This Tax Season

The Next Generation Of Industry 4.0

Finding Purpose In The Time Of The Coronavirus

No Business Experience? You Can Still Start A...