Breaking
Stock Market Crash: The End Game And Down...
Does Artificial Intelligence Design New Drugs Or Discover...
NBA 2K21: How To Download A Realistic 2021...
Ask Larry: When I File For Social Security...
Level UP With LinkedIn Live
AstraZeneca May Conduct Additional Trial For Covid-19 Vaccine...
Robert Smith Breakup Exclusive: Billionaire Brian Sheth Reveals...
‘Destiny 2’ Wants Season Of The Hunt Feedback,...
British Auto Makers’ Nervousness Over EU Trade Deal...
Want To Disrupt An Industry? Solve A Problem...
Life In 2020 AD: The Challenges Of The...
How Companies Are Adapting To Changing Customer Demand
Cyber Police Claim Double Win: Arrests In 50,000-Victim...
‘Tis The Season To Be Jolly Unless You...
The Physics Of Why You Must Never Deep...
Five Ways Holiday Shopping Will Be Different This...
Home Finance Secretary-General Says United Nations Must Embrace Blockchain
Finance 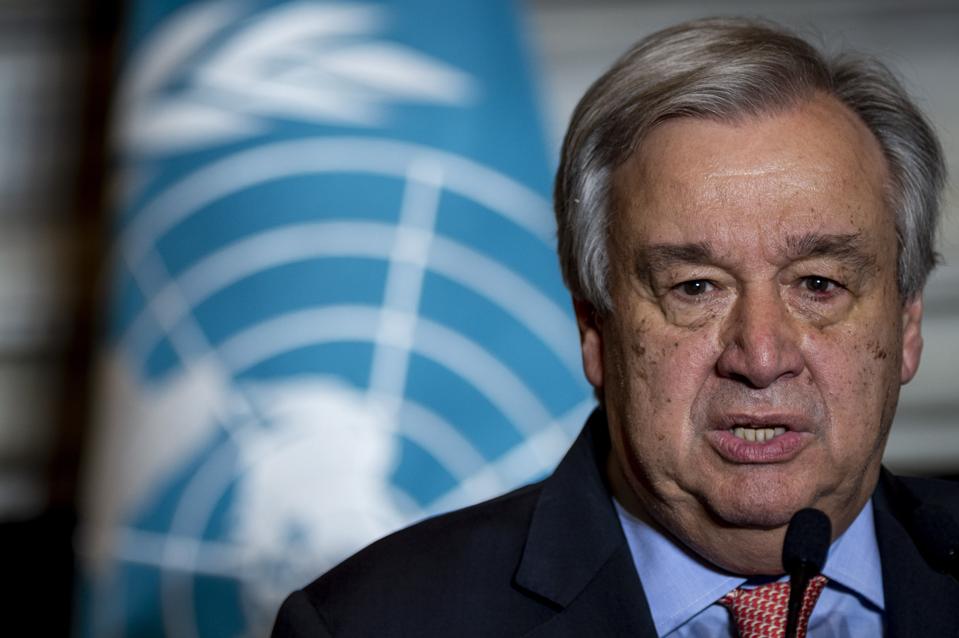 United Nations secretary-general Antonio Guterres attends a press conference. The former prime … [+] minister of Portugal is an outspoken advocate of blockchain and has set up his office to help oversee its internal development, along with other technologies.

United Nations secretary-general António Guterres says the intergovernmental giant needs to embrace blockchain. In a statement provided to Forbes by the office of the former prime minister of Portugal’s United Nations office, Guterres touted the technology first made popular by bitcoin as a crucial component of the organization with at $TK billion annual budget’s goals to building a more sustainable world.

Coming at a time when the president of China has touted blockchain as a national priority, and the $6 billion United Nations Children’s Fund has started accepting bitcoin and ethereum donations for some of its projects, the statement from Guterres shows that cryptocurrency and blockchain is being seriously explored at the highest levels of the largest organizations in the world.

While China seems largely focused on using blockchain as a way to prevent money laundering and better track its citizens’ transactions, the United Nations work has been more focused on giving donors increased assurance their donations are being spent how they wish, while reducing waste from the organization’s giant supply chain.

“For the United Nations to deliver better on our mandate in the digital age, we need to embrace technologies like blockchain that can help accelerate the achievement of Sustainable Development Goals,” said Guterres in the statement provided exclusively to Forbes.

This isn’t the first time Guterres prominently mentioned blockchain. In September 2018, he gave a speech in English, Spanish and French on the global lack of trust, or what he called a “trust deficit disorder,” that could in part be solved by blockchain, with support from artificial intelligence and other technologies to help shine a light on the inner operations of global organization.

In that speech, give at the United Nations general assembly in New York, even as Guterres warned about the potential misuse of “near anonymous cryptocurrency payments,” he touted the potential of the technology to achieve the United Nations sustainable development goals (SDGs). First set in 2015, with the goal of achieving them by 2030, there are 17 SDGs, including ending poverty and responsibly producing and consuming goods.

In October 2019, UNICEF received its first bitcoin and ethereum donations from the Ethereum Foundation, with the expressed purpose of using the cryptocurrency to fund international startups using blockchain to solve problems that support United Nations initiatives. At launch, Unicef USA, Unicef France, Unicef Australia, and Unicef New Zealand had joined the project, which is now being explored by other national offices.

The difficulty for an organization the size of the UN to accept cryptocurrency and build other applications with blockchain cannot be overstated. It took years for UNICEF to get sign off from dozens of internal stakeholders just to accept cryptocurrency donations, all for the potential benefit that anyone anywhere in the world could give or receive the same asset, and while the prices fluctuated dramatically.

Other blockchain applications, which promise to reduce waste and redundancy between the UN’s occasionally competing agencies, and give donors increased trust that the funds they donated were appropriately spent, could take even longer to build. Research firm Gartner predicts that 90% of blockchain projects will fail in the next three years.

While secretary-general Guterres doesn’t have direct contact with the UN’s blockchain projects, he is in a way behind all of them. In September 2018, the former prime minister of Portugal and chair of the Parliamentary Committee for Economy, Finance and Planning, published 20-page strategic plan for using technology to accomplish the sustainable development goals, in which he explicitly called for further support of the Innovation Network’s use of blockchain and artificial intelligence.

In the plan, called the “UN Secretary General’s Strategy on New Technologies,” Guterres placed the responsibility for the coordination and implementation of the plan within his own executive office, with the support of a new technology reference group, initiating quarterly meetings to provide him updates on the progress. “As we learn what is working and what is not,” he wrote. “we will revisit the strategy and update it, ensuring its relevance to support a culture of innovation, and that our global efforts are benefiting from experiences at the country and regional levels.”