Breaking
Zynga Stock Looks Attractive At $9
How Russian Thieves Use Dark Web To Get...
France Off Travel Corridors And FCO Exempt List
Ask Ethan: Why Are The Moon And Sun...
When To See The Moon And The Planets...
IRS-CI Involved In Largest-Ever Seizure Of Terrorist Organizations’...
The Check Really Is In The Mail. After...
Epic Games Vs Apple: Why You Won’t Be...
Senator Kamala Harris Proposed A Bold Tax Credit...
Deal Terms To Reduce The Risk When Buying...
Multiple Sclerosis Drug Shows Promise For HIV Prevention...
The Neglected Piece Of Retirement Planning
It’s No Longer A Viable Option For Capitalism...
Virtual Credit Cards: An Extra Layer Of Protection...
Lessons From The Rainforest: Human Health Leads To...
Four Easy Ways To Bolster Your Company’s Reputation
Home Finance Senator Inhofe: Republican Senators ‘Are Supportive’ Of Second Stimulus Checks
Finance 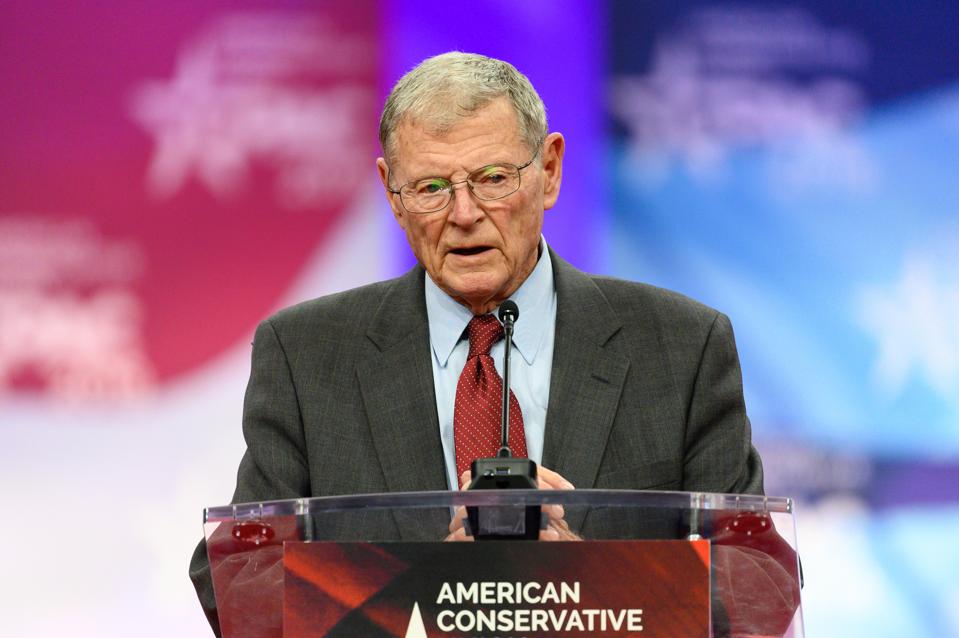 Senator Inhofe said Republican Senators “are supportive of a second stimulus check and that … [+] financial relief “is going to happen, just not yet,” one of the first indications that Republicans may be changing their tune on the matter.

In today’s surprising second stimulus check update, signs emerged that Senate Republicans may actually be open to another round of direct payments to Americans. In a previous column, I offered directional indicators to follow if one wanted to avoid the daily tussle of pronouncements on second stimulus checks; however, if you’re enthused by the blow by blow, here’s the latest development.

Senator Jim Inhofe (R-Oklahoma) said that financial relief for Americans “is going to happen, it’s just not going to happen yet,” according to Anna Wiernicki, a Washington D.C., Correspondent for Nexstar. Inhofe made the comments after the Senate Republican’s weekly luncheon where second stimulus checks preoccupied the agenda.

[You can watch the video clip of Senator Inhofe’s comments here.]

In his comments, Infohe remarked that “the idea of a second stimulus check fueled two hours of discussion at the lunch,” and that Senators “were supportive, but working through details.” “What you don’t want to do is have a reward given to people who don’t want to work,” Inhofe added.

Up until now, Republicans had adopted a wait and see approach and openly dismissed a second stimulus check. “Well people in hell want ice water too,” said Senator John Kennedy (R-Louisana) when asked about another round of checks. “I mean, everybody has an idea and a bill, usually to spend more money. It’s like a Labor Day mattress sale around here.” Similarly, Senator Ron Johnson (R-Wisconsin) mentioned that he “wasn’t a real big supporter of that in the first round,” he said. “This isn’t your classic recession.”

MORE FROM FORBESSorry, Republicans Refuse To Budge On Second Round Of Stimulus ChecksBy Shahar Ziv

Why Republicans May Be Changing Their Tune:

Inhofe’s comments were surprising, but may reflect a new reality emerging in Washington. While the coronavirus pandemic appeared to be waning in initial hot spots in the northeast, it has now spiked in the South and West, including in many states that tend to vote Republican. Earlier this week, the U.S. had its highest one-day number of cases since the start of the Covid-19 outbreak and 29 states currently have rising case numbers.

Texas, Florida, and Arizona have all had to pause their re-opening plan and, in some cases, even retreat. Texas has now ordered bars to close and reduced capacity at restaurants as a result of a spike in cases. As argued in a previous column, “with renewed outbreaks and a virus graph that is anything but flat, Republicans may be having a chance of heart about a second payment.

However, a more likely explanation for why Republicans are changing their tune is that President Trump has increasingly warmed to the idea of a second payment. As Forbes’ Andrew Solender reported yesterday, “a total of 19 polls of voters in swing states from four different pollsters were released Thursday, with former Vice President Joe Biden leading President Trump in every single one, including in historically Republican states like Arizona, Georgia and Texas.” With sagging poll numbers and a need to catalyze the economy, Trump is viewing a “generous” stimulus package, including a second stimulus check, as an arrow in an increasingly shrinking quiver.

More specifically, “President Trump has told aides he is largely supportive of sending Americans another round of stimulus checks, expressing the belief that the payments will boost the economy and help his chances at reelection in November,” according to The Washington Post. Given Trump’s stranglehold on the Republican base, Republican senators may be forced to reconsider or even acquiesce to sending a second stimulus payment to Americans to appease the President.

There is still no guarantee of a second stimulus check and Americans likely won’t have certainty until late July or early August when the Senate returns from its July 4th recess; however, Inhofe’s comments were the clearest yet of potentially shifting wins. In the meantime, continue watching the resurgence of coronavirus and pay special attention to the June unemployment report that will be released on July 2. If the virus continues to accelerate and the June jobs report isn’t rosy, that may lend further credence to a second stimulus check materializing.

Second Stimulus Checks: 3 Most Critical Dates To Keep In Mind

Don’t Expect Next Stimulus Bill Until End Of July

Sorry, Republicans Refuse To Budge On Second Round Of Stimulus Checks