Breaking
In Need Of A Competitive Edge? Look To...
Think Small: Timely Picks To Capture The Reawakening...
Patient Gets Covid-19 Swab Lodged In Her Lung...
Nine Signs You’re Not Being Effective During Your...
Chromebooks Can Now Run Windows 10 – Find...
Will Biden’s Tax/Benefit Plans Help/Hurt You And The...
This Fashion Brand Turned A Stripe Into A...
Shots In The Dark: Why Access To A...
What Building Wealth Really Takes In Business
Building A Circular Economy In New York City...
How To Cast Your Vote Against Election Scams
New Science On Stress: Feeling Your Feelings Works...
Why Now Is The Right Time To Acquire...
7 Obstacles That Prevent People From Starting Businesses...
Booking Holdings Falls; Likely To Remain A Risky...
Apple iPhone Crushes Samsung Galaxy In Important New...
Home Business Senators Sanders And Warren Strongly Endorse The Benefits Of Private Jet Travel
Business

Somewhere Rick Wagoner, Alan Mulally and Robert Nardelli must be chuckling or perhaps shaking their heads, maybe both. The then CEOs of the big three automakers found themselves tarred and feathered back in 2008 when they each decided to fly company private jets from Detroit to Washington D.C.

Their offense for not walking or hitchhiking the 500 miles is that they were coming to the nation’s capital to make a case for a government bailout as the economy tumbled during the Great Recession. 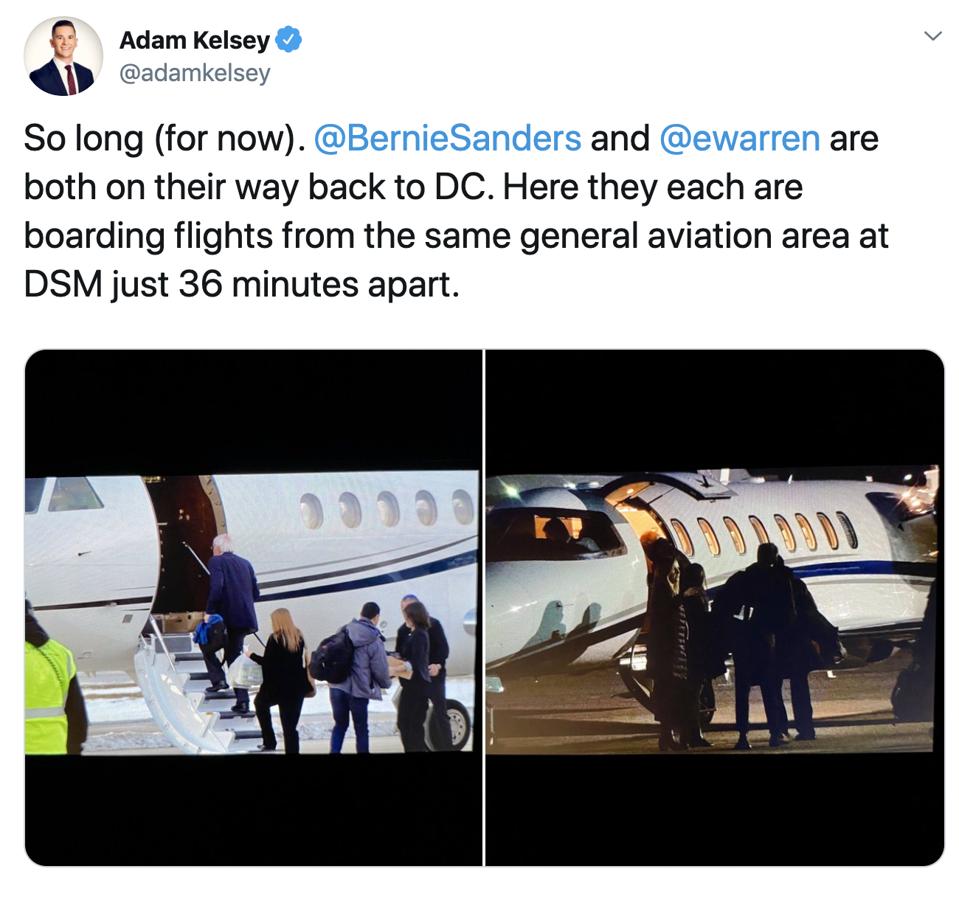 Senators Bernie Sanders and Elizabeth Warren board separate private jets 36 minutes apart to fly … [+] from the same airport back to Washington D.C., according to a report from ABC News.

The images that might have gotten their attention were posted on Twitter by ABC News campaign reporter Adam Kelsey (above). They showed on the left a snapshot of Vermont Senator and Presidential candidate Bernie Sanders climbing into what appears to be a large cabin private jet. The other picture claims to show Massachusetts Senator and White House apprentice Elizabeth Warren boarding a midsize Learjet.

Kelsey caption the pictures on his Tweet, “So long (for now). @BernieSanders and @ewarren are both on their way back to DC. Here they each are boarding flights from the same general aviation airport at DSM just 36 minutes apart.”

The image was posted on Sunday, Feb. 2, 2020, so apparently they were on their way back for the impeachment trial of President Donald J. Trump the next day where their attendance was mandatory. 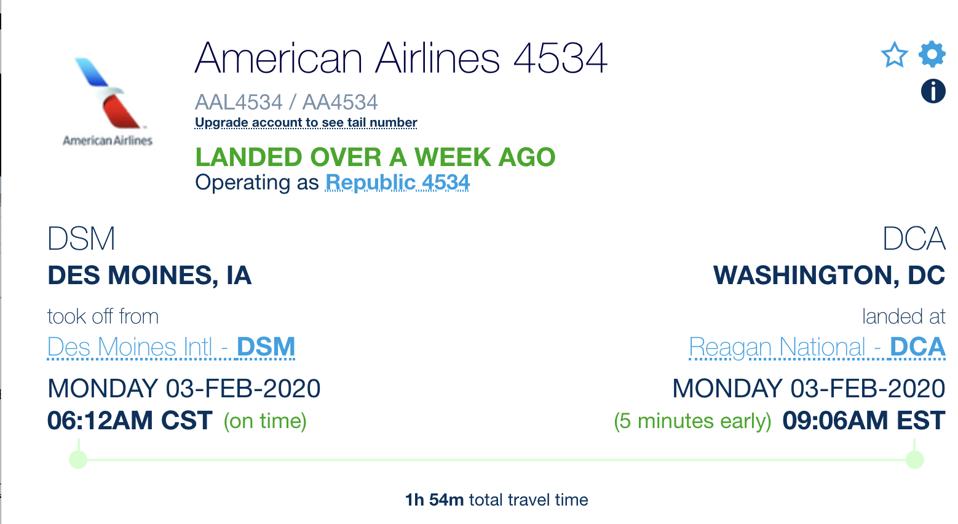 There were multiple options for Senators Bernie Sanders and Elizabeth Warren to fly commercially … [+] from Iowa back to Washington D.C. for the Trump Impeachment Trial.

Like for the automaker executives, private jets were not the only option. In fact, American Airlines flight 4534 which leaves Des Moines at 6:02AM and is scheduled to arrive at Reagan National Airport at 9:29AM. It ended up getting to the gate early at 9:06AM on Feb. 3, according to Flight Aware (above).

That said, I would certainly understand if you really have to be somewhere, you probably don’t want to rely on the airlines.

Luckily there were two connecting options on the Sunday night they left, both around 6PM, and each of which would have landed them back in Washington D.C. about midnight.

While it’s not clear exactly the time each departed Des Moines, the ABC report said they were within 36 minutes of each other. Since one appears to be in daylight and the other in the dark, it’s worth noting sunset in the Iowa city was 5:31PM on Feb. 2. In other words, they probably could have both made the connecting flight options, although they might have had to trim back their last engagement.

The pictures of Sanders and Warren flying privately is no gotcha moment. Campaign finance records show the Vermont legislator spent $1.2 million chartering private jets during the last quarter of 2019. He also spent $23,000 in carbon offsets. Warren For President, Inc. spent over $750,000 in the last half of last year, and like Sanders bought carbon offsets.

It’s easy to say the CEOs of General Motors, Ford and Chrysler could have hopped on a commercial flight. If they did, it would have been only for show.

Preparing to testify before Congress while managing global conglomerates in the midst of the worst financial crisis in 80 years, they probably weren’t flying solo. Each of the executives likely had a team of people with them, and since each company owned the airplanes and employed pilots, it may well have been that in terms of direct expenses, their private flights were around the same cost as buying five or six airline tickets. Direct costs would have been fuel, landing and airport fees.

In the cases of Sanders and Warren, it’s also not like they haven’t been attacked for their seemingly incongruous use of private jets. In fact, former officials of Hilary Clinton’s 2016 Presidential campaign took to the media to let us know Bernie demanded private jet charters to his appearances on her behalf back then.

From my perspective, I am happy to see everyone I’ve mentioned in this article was flying privately. In each case, flying privately was the most sensible solution. While all aviation only accounts for 2% of carbon emissions and business aviation is only 2% of that total, I applaud both for buying offsets.

No Plane No Gain, an advocacy group for private aviation lists out key benefits of use private jets for business travel as including time savings, improved productivity, strategic transaction acceleration, protection of intellectual property, and improved customer service.

While Warren earlier this week appeared to make a derogatory about fellow candidate, former New York City Mayor Michael Bloomberg, zooming around on his own private jet, the Massachusetts Senator who says she supports good capitalism should rest easy her use of business jets puts her in good company.

Ninety-eight percent of the Top 50 “World’s Most Admired Companies” by Fortune magazine use business aviation. Both Sanders and Warren can also feel good to know 100% of the “100 Most Trustworthy Companies in America,” as selected by Forbes, are also users of private aviation.

For all of those folks aspiring to stay or move into 1600 Pennsylvania Avenue, keep in mind S&P 500 companies that use private aviation outperformed non-users by 70%.

In terms of driving the economy,, they probably should keep in mind business aviation employs over one million Americans and contributes more than $200 billion annually to the domestic economy.

What’s more, two-thirds of passengers told researchers they are more productive on business aircraft than when they are in the office. For politicians, that number could be even higher!