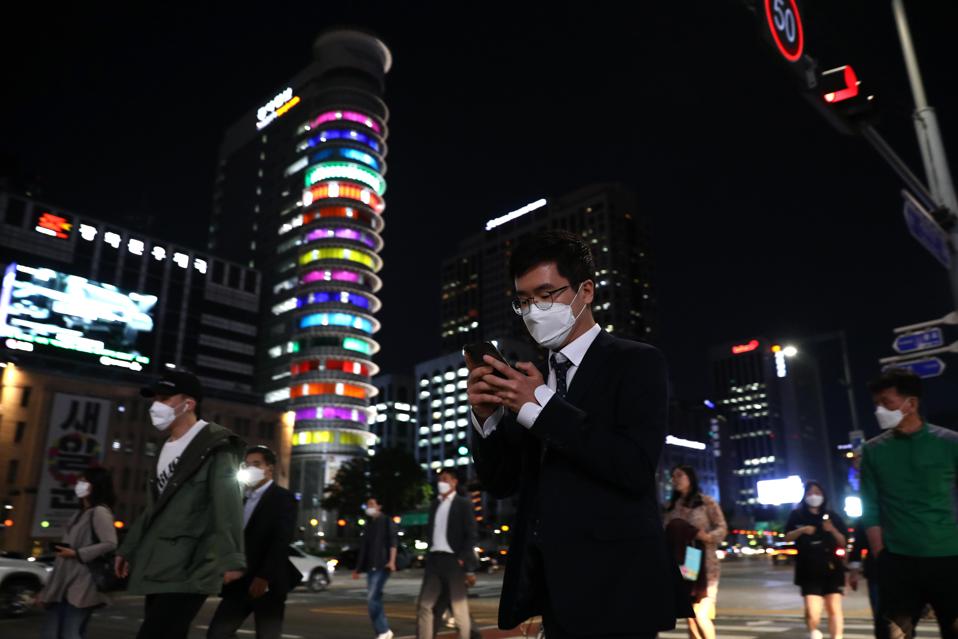 People walk along the street in face masks on May 06, 2020 in Seoul, South Korea.

The South Korean capital’s nightclubs and bars have had to close their doors after a cluster of new coronavirus cases were linked to a 29-year-old man who had visited three clubs in Itaewon, a popular nightlife district in Seoul.

Seoul Mayor Park Won-soon ordered all such facilities to “suspend business immediately” and warned of “strict punishment” for those who remained open in defiance of the order.

The stern decision of the mayor, a leading light in the country’s ruling Minjoo or Democratic Party, came after senior officials had talked at length about the country’s success in combating COVID-19.

Park, sometimes mentioned as a possible candidate in the next presidential election in 2022, warned that “carelessness can lead to an explosion in infections,” as was clear in the latest outbreak. With nightclubs shut down, normally busy streets through Itaewon were deserted. Usually throbbing cafes and bars, suffering from loss of tourists from foreign countries, were locked tight, dark and empty.

South Korea’s President Moon Jae-In, who cannot run for a second term under Korea’s constitution, warned it would be “a long time before the COVID-19 outbreak has ended.” Nonetheless, he said, “the relatively rapid stabilization” of the disease would mark “a turning point for enhancing economic vitality.”

Talking three years after his inauguration culminated the transition from conservative to liberal rule, he vowed Korea would “blaze a trail in the post-COVID-19 era with a pace-setting economy” while waging “prolonged war” against the disease.

Moon’s words left no doubt the latest outbreak had come as a severe disappointment after authorities had lifted restraints in the belief that everyone would engage in “voluntary social distancing” in a show of common sense.

“We still emphasize social distancing,” said Son Youngrae, director of strategy at the disaster management headquarters of the ministry of health and welfare. “The basic concept will be coordinated in daily life.” Intrinsic in relaxation of rules was the belief that citizens would cooperate.

Free of formal constraints, however, several clubs in the famous Itaewon neighborhood had clearly ignored the rules, leaving customers jostling for space while forgetting to wear face masks. Within a week, the virus had been detected in 54 customers who had flocked to at least three of the clubs and may have endangered more than 1,500 people.

One reason the spike in numbers was disappointing was that new cases had been going down to single digits per day. The total number of cases as of Sunday stood at 10,874, including 256 who have died–far less than many other major countries but enough for Koreans to stay on guard against the menace.

In fact, Son warned that a second outbreak would be “inevitable”–possibly in the form of “an explosive outbreak when the temperature goes down” in the fall.

That said, however, he believed that the speed with which it spread would be “remarkably slow.” Moreover, he added, containing the impact would be simpler than it had been after the virus “developed with great speed” in early February. That was after members of a Christian sect in Daegu, Korea’s fourth largest city, 140 miles southeast of Seoul, had caught it while proselytizing for converts in Wuhan, the epicenter of the disease in China.

Unlike other countries, Son noted, Korea has never locked down facilities or moved people away from their homes to escape the virus. “We suggest people voluntarily practice social distancing,” he said. “That means going back to the normal routine.”

Ultimately, however, victory over the disease depends on finding a vaccine to prevent it and a cure for those who have it.

“Even if we have a treatment,” said Kwon Jun-Wook, deputy director-general at the central disease control headquarters of the Korea Centers for Disease Control, “we will not be able to prevent COVID-19 in the first place.” By next year, he forecast, “We will have a concrete picture” of progress on a vaccine, he said, but it won’t be ready for general use for another year

In the meantime, Korea is suffering from the absence of tourists, especially from China, who once flocked to department stores and duty-free shops, and also from decreased exports to countries where offices and factories have shut down and unemployment has risen sharply.

The Ministry of Trade, Industry and Energy reported exports last month had dropped an astounding 24.3% from April 2019 while imports fell 15.9%. The result was a trade deficit of $950 million–the first monthly deficit since January 2012.

Here’s When The Stock Market Will Recover, According...