Breaking
The Impact of Internships in Marketing
3 use cases of chatbots for critical services
How To Make Working From Home Appeal To...
Tips on How to Design an Office Space...
4 Tips To Help Build Amazing Customer Relationships
How Are US Pension Funds Responding to the...
Benefits of second-hand cars for your business
4 Reasons Why Your App Needs To Undergo...
Your Guide to Online Marketing
How to find a Solicitor in London
5 car tyre and safety tips for a...
Everything You Need to Know About Corporate Social...
Is Adaptive Leadership the Key to Motivating Employees?
Why business events are set to return with...
Business events set to return with a bang!
Expanding Internationally: 5 Things to Consider for eCommerce...
Home Business [Set Visit] Into The Dark – ‘Good Boy’, A Great And Spooky Watch
Business

[Set Visit] Into The Dark – ‘Good Boy’, A Great And Spooky Watch 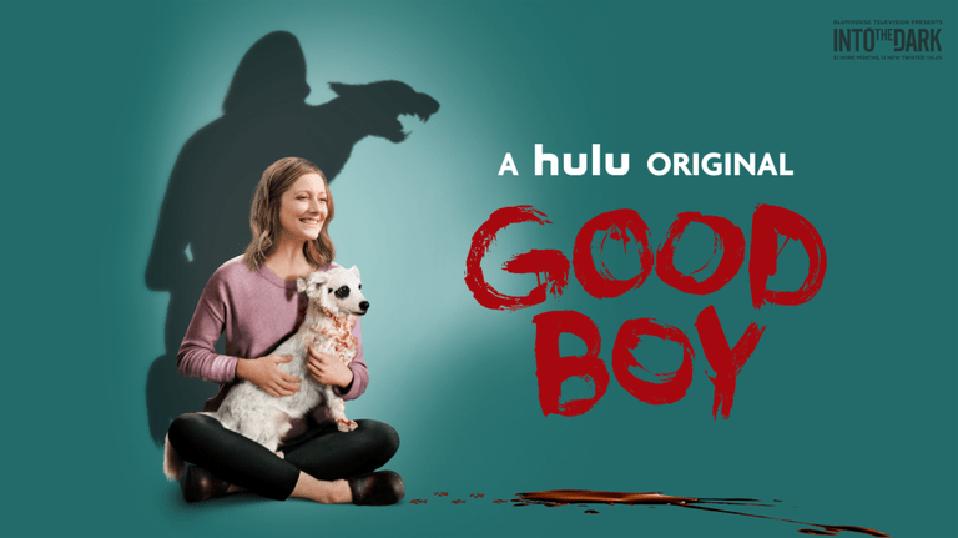 Into The Dark – Good Boy

Hulu’s continued partnership with Blumhouse Television for the Into the Dark series has brought us a diverse array of horror entries on any topic under the sun, from the perils of stranded elevator romances (Down) to high concept sci-fi on cloning for serial killers (All That We Destroy) to the creepy potential of purity retreats (Pure) and more. Each feature-length installment is holiday-inspired with a thriller spin, and they’re always a lot of fun.

Premiering tomorrow, June 12th, is the newest entry in the series: Good Boy, directed by Tyler MacIntyre (Tragedy Girls) from a script written by Aaron Eisenberg and Will Eisenberg (Tales of Arcadia) and starring Judy Greer (Halloween Kills, so many good projects) and McKinley Freeman (End of Watch). The official synopsis:

‘When Maggie gets an emotional support dog to help quell some of her anxiety, she finds him to be even more effective than she imagined…because unbeknownst to her, he kills anyone who adds stress to her life.’

A best friend indeed! Albeit a scary one.

Back before COVID-19 shut down production for months, I was able to visit the ‘Good Boy’ set and spend time with the director, writers, cast and crew. As a fan of the series and Judy Greer and dogs, I jumped at the chance—I mean, I can’t think of many better ways to spend a day than hanging out while they shoot a cool horror film.

One thing that immediately impressed me about the visit was the incredible efficiency of the Blumhouse crew. Everyone we met was amiable and professional, every aspect of production was efficient and organized, and myself and a handful of other film writers were able to watch it all go down.

One of the highlights was meeting so many of the cast and crew. On the crew side, we met Special FX Coordinator Simon White and Stunt Coordinator Tim Mikulecky, as well as Chico the Dog and his trainer Kim. We heard a number of stories about working with animals (including one about a 350 pound python from a prior shoot that became dangerously interested in what the stunt performer had for lunch) and about how they make sure all stunts are safe. Perhaps most importantly, we spent quality time with Chico, the well trained pup whose starring role as “Reuben” is guaranteed to be a memorable one.

An interesting tidbit about the shoot is that, in addition to being played so convincingly by Chico, ‘Reuben’ goes through some frightening changes. We had the pleasure of watching the various bits of movie magic that go into that process (including different types of puppets, a destructible door, and other bits of movie magic) and were able to shoot ‘Reuben’s final kill. Being there to see the attention to detail on the puppets (I’m a huge monster movie nerd, this was the *best day ever* by the way) and the clever ways they were used was incredible fun. 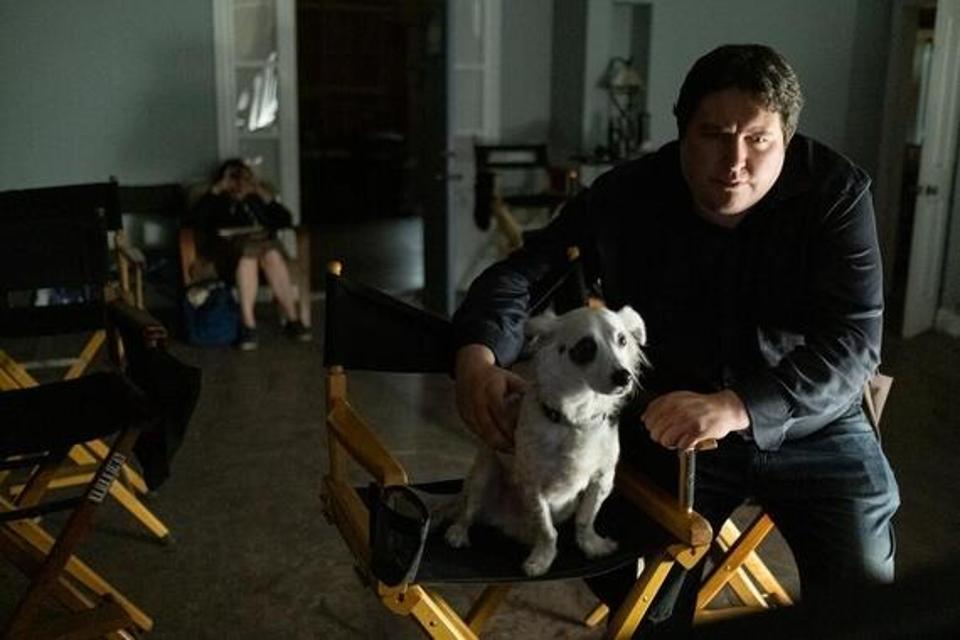 We had the pleasure with sitting down with both the director, Tyler MacIntyre, as well as writers Will and Aaron Eisenberg. MacIntyre spoke about how the script was a great fit for the themes and kinds of films he prefers to direct. He noted that originally he was nervous about working with Chico (to quote, “if this dog doesn’t perform specifically how we want it to, we’re screwed), but these concerns subsided after Chico proved reliable in a pinch. It was also great to talk with the writers about the origin of the idea for the script, and how a chance encounter with the writers and Judy at a coffee shop was how she became attached to the project.

(They actually happened to be writing this script about a woman’s emotional support dog with Judy in mind for the lead when they happened to randomly run into her while she was walking her dog. True story.) 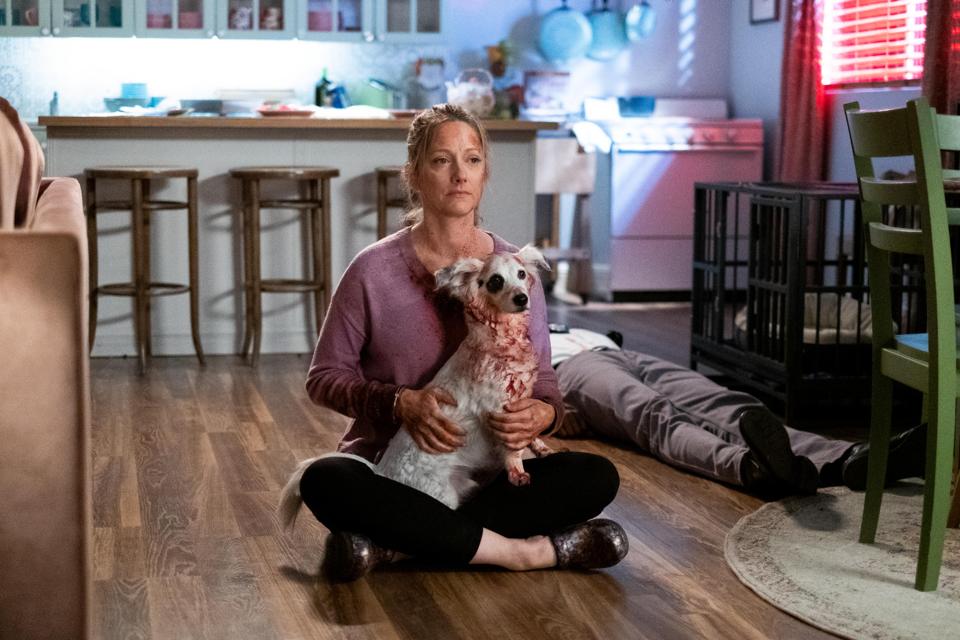 Both McKinley Freeman and Judy Greer were so enthused about the project that it was pretty contagious. Freeman noted that what appealed most to him about the story in particular was the notion that what’s most frightening may be what you least expect to be horrifying. Judy, who absolutely exuded charm, talked about her connection to the material. She spoke of her own dog, a small pup she originally intended as a travel companion (but who ended up being an absolute tiny tyrant—but a well loved one).

At the end of it, Into the Dark’s Good Boy entry will hold a special place for me. It was so clear that everyone involved was thrilled to be there and it was pretty incredible to see them shoot the final scenes and to meet some great and talented folks. The entry drops on Hulu tomorrow: don’t miss it, and if you have a pet be sure to bring them along.

From Value Investor To Value Creator – A Case Of Active Engagement