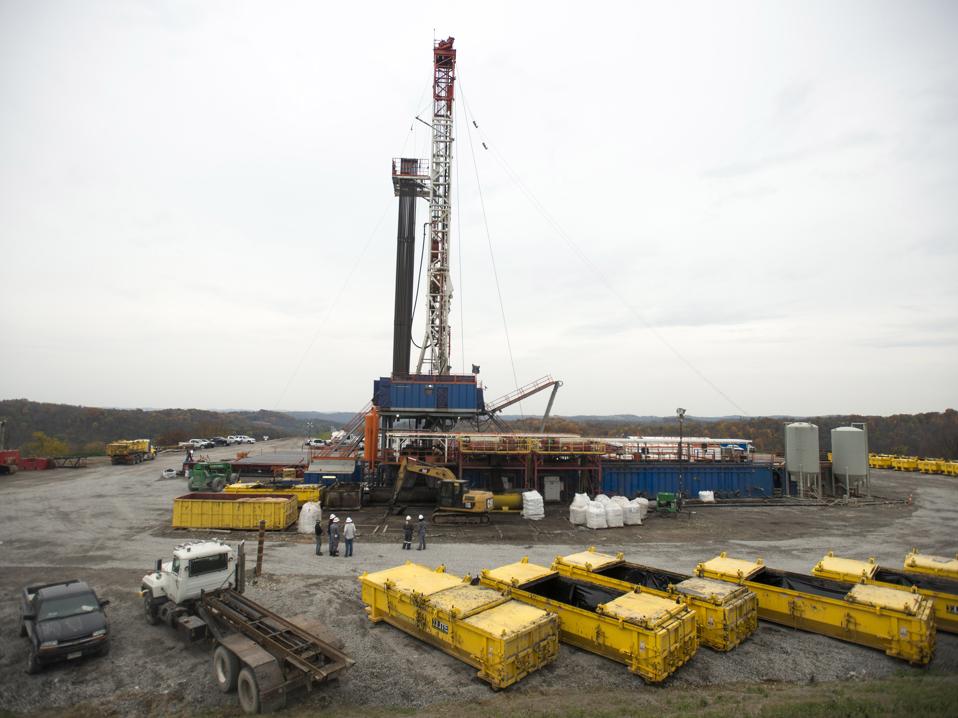 An EQT rig drilling in the Marcellus shale.

America’s shale frackers are producing a record amount of natural gas — more than 100 billion cubic feet per day. Gas is so plentiful that in the oil fields of west Texas producers will pay pipeline companies to take it off their hands, while on average the market price of gas has sunk to $2.25 per million British thermal units.

This makes a nervewracking time for Toby Rice, the 37-year-old CEO of EQT Corp, the nation’s biggest gas producer. Shares in Pittsburgh-based EQT fell 5% Monday after Moodys downgraded $5 billion of EQT dept to junk status and the company announced a $1.8 billion charge and 20% reduction in its reserve valuations. Shares have recovered 4% Tuesday.

Rice assumed the helm of EQT (formerly known as Equitable) last July after he and his brothers teamed up with activist hedge funds D.E. Shaw and Elliott Management to fight a proxy battle against EQT’s former management, culminating in the ouster of CEO Bob McNally.

Who are these Rice brothers? Sons of Daniel Rice III, a fund manager at BlackRock, who in 2007 cofounded Rice Energy with personal money to acquire acreage in the Marcellus region of Pennsylvania. Rice entrusted it his sons Toby, Derek, Daniel IV, and Ryan to run, and in 2017 they sold Rice to EQT for nearly $8 billion in cash and stock.

When they sold, EQT’s share price was about $30. By the time Toby Rice wrested control it had fallen to $16. Rice introduced a 100-day plan to transform EQT by getting smarter about where and how to drill. So far he’s cut capital spending by a third and laid off a quarter of employees. Still on tap is the sale of non-core EQT assets like a $1 billion stake in spun off pipeline division Equitrans, which will help refinance $1.75 billion in bonds coming due by the end of 2021. Shares have slumped further to $8.70.

In its update Monday, EQT said that due to low gas prices it would take a $1.8 billion non-cash charge and reduce its proven reserves by 20% — the reason for the charge has to do with SEC reporting requirements that require companies to weigh their future opportunities against current commodity prices. The lower gas prices get, more marginal wells become not worth drilling, and have to be removed from plans disclosed to shareholders. The company warned yesterday that getting a junk bond rating could require EQT to post $1.6 billion in letters of credit to trading counterparties, a further challenge to the balance sheet. To help keep it all straight, Rice hired a new CFO from Consol Energy a few weeks ago, named David Khani. He’s also holding on to the services of interim CFO Kyle Derham, announcing a 2-year consulting year at $720,000 a year.

The shale-ennial Rice bros have reason to be patient. EQT sits on 17.5 trillion cubic feet of Marcellus gas, enough for more than a decade of continued production even at current low prices. All that gas is why EQT’s “idiosyncratic self-help story” (as one analyst has called it) will be one to watch in the decade ahead.