Breaking
Three Essential Components of a Successful Small Business
Pandemic Pet Adoptions Add To Chewy’s Tailwinds, But...
How to Use LinkedIn’s Social Selling Index Like...
Strong Revenue Trend Could Drive EXACT Sciences Corporation...
9 Things To Know Before Starting A Business
‘Game & Watch: The Legend Of Zelda’ Will...
The 9 Fundamental Components Of A Startup Pitch...
How to Get Results from Broken Link Building
Florida Supreme Court Tells The American Bar Association...
How to Write Perfect Paid Social Media Marketing...
How Restaurants Can Design a More Sustainable Food...
Expenses That Small Business Owners Need to Be...
How You Can Make Saying Goodbye To The...
Biden To Meet Royal Family At Cornwall’s Eden...
It’s Going To Be Emotional — Going International...
Peer Mentoring For Students: STEM & Buds
Home Business Shohei Ohtani Is The Next Christian Yelich (And He Can Pitch, Too)
Business

Shohei Ohtani Is The Next Christian Yelich (And He Can Pitch, Too) 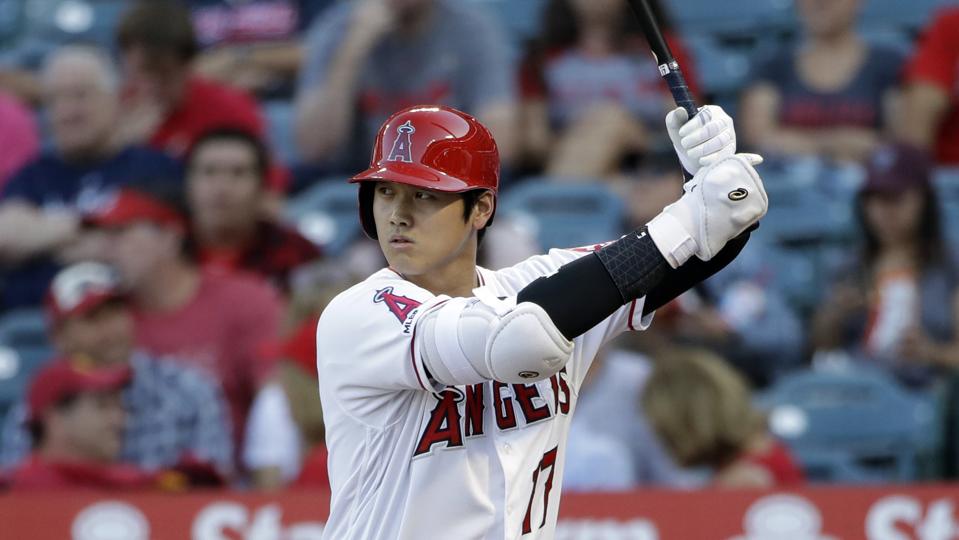 A while back, when I was writing for Fangraphs, I projected then-Marlins’ outfielder Christian Yelich as a slam-dunk future superstar. The reasons were many, but the crux was this – he hit the ball really hard, but never hit it in the air. If only he could maintain his batted-ball authority profile, while increasing his fly ball rate…. then homer titles and MVP awards would be in his future. I even dropped a Hank Aaron comp.

Yelich has delivered on his promise. There’s another player threatening to follow in his footsteps. And, oh, by the way, hitting is Shohei Ohtani’s side gig.

2019 is generally considered a lost season in Ohtani’s career arc. He was rehabbing from Tommy John surgery after making only 10 starts on the mound in 2018. He did wind up serving as the Angels’ primary DH, flashing brilliance though his qualitative numbers were down and his counting numbers similar to his rookie campaign. Look a little deeper, however, and there is a superstar in there. Placed in the context of his ongoing rehab, that is truly astonishing.

As a frame of reference, let’s go back to Yelich. From 2014-16, he placed in the 3rd, 1st and 1st percentile, respectively, among NL regulars in fly ball rate. He never once topped 20% in that category. He crushed those flies, however; in 2016, his average fly ball authority of 95.0 MPH was over a full standard deviation above the NL average. That year was a breakthrough for him; it was his first year in double figures in homers, and he jumped straight to 21.

Yelich cleared a 20% fly ball rate for the first time in 2017, but didn’t blossom until he escaped Marlins Park the following season, his first in cozier Miller Park. The combination of a friendlier home park, a fly ball rate no longer at the very bottom of NL regulars, and continued thunderous fly ball contact (average authority of 94.6 MPH) resulted in an MVP award.

But there was still so much upside potential. He won the 2018 MVP award with a fly ball rate in the 7th percentile, for goodness’ sake. He would have won another one in 2019 if not for his late-season fractured kneecap, likely easily clearing 50 homers, as his fly ball rate actually narrowly exceeded the NL average.

Ohtani? Well, his 23.8% fly ball rate was in the 5th percentile among 2019 AL regulars. Of the 135 players in the league with the most batted balls, only five players posted batted ball authority of over a full standard deviation above average overall, and within each batted ball category. Nelson Cruz, Aaron Judge, Matt Chapman, Miguel Sano, and Ohtani.

Sano’s thump is mitigated by a massive K rate, and Cruz offers no complementary skills beyond his bat. Judge and Chapman are great, but do they pitch?

Ohtani is far from a finished product with the bat. Yes, he strikes out too much, and his plate discipline is a work in progress. He’s only a .252-.324-.401 career hitter against lefties, with a strikeout rate comfortably over 30%.

Still, he is only 25 years old, is likely still in the off-the-field adjustment process to a new country, a new language, etc.. Most players in a similar situation endure their growing pains in a minor league environment, out of the public eye. Ohtani is in the second largest city in the country, in a pitchers’ park, rehabbing what for mere mortals is a career-threatening elbow injury.

Earlier this week, I wrote this piece, hypothesizing that Mike Trout’s decline phase will begin in 2020. Very soon, and possibly this season, Ohtani will overtake him as the best player on the Angels.

What will a peak-period Shohei Ohtani season look like? What will be his hitter/pitcher WAR mix? At this point, the possibilities are endless. If he were to give up pitching tomorrow, Ohtani would have a legitimate shot at becoming an MVP candidate on his bat alone, assuming he could still play competent corner outfield defense after a multiple year absence.

The more likely, and optimal case would be one where he could log 400 or so plate appearances with a league average fly ball rate and improved peripherals, plus 150 or slightly more dominant innings on the mound. There is only one comp for such a combination – Babe Ruth’s age 24 campaign, his last year in Boston.

Can it be done? At this point, Ohtani has made it perfectly clear that he is even better than the player the Angels thought they were getting. The industry believed he was a potentially dominant pitcher with a chance to hit. He appears to be a potentially dominant pitcher and hitter, and the main factor limiting from reaching the top in either discipline is the existence of the other.

And that’s fine. He should continue to try to do both and become the game’s ultimate weapon. The only thing missing from the Mike Trout era in Anaheim is playoff baseball. With both Trout and Ohtani among the upper strata of the game’s best, that shouldn’t be a problem for much longer.

Can The Spanish Teams Safely Negotiate The Next Stage Of The Champions League?