Breaking
Meet Onesimus, The Enslaved Man Who Saved Boston...
How to Build a Sales Forecast Model
The Unexpected Ways COVID-19 Has Forever Changed What...
Google Posts: Conversion Factor — Not Ranking Factor
How To Bring Your Branding To Life
Coinbase Cofounders And Investors Poised To Rake In...
How To Stay Top-of-Mind For Your Audience With...
Employers: Eight Red Flags You May Not Notice...
The benefits of videoing in the automotive industry
Ted Lasso, Other Apple TV+ Shows Arriving Soon...
How To Incorporate Click And Collect Into Your...
What Are Working Capital Loans and When Should...
The 10 Biggest Trends in Entrepreneurship to Look...
Clubhouse Has Grown 10X In Two Months. Here’s...
Here’s Why Tyson Foods Stock Looks Undervalued At...
How To Maintain Client Relationships During Long Projects
Home Business Shortened Offseason Good For Washington Nationals Manager Davey Martinez’s Heart
Business 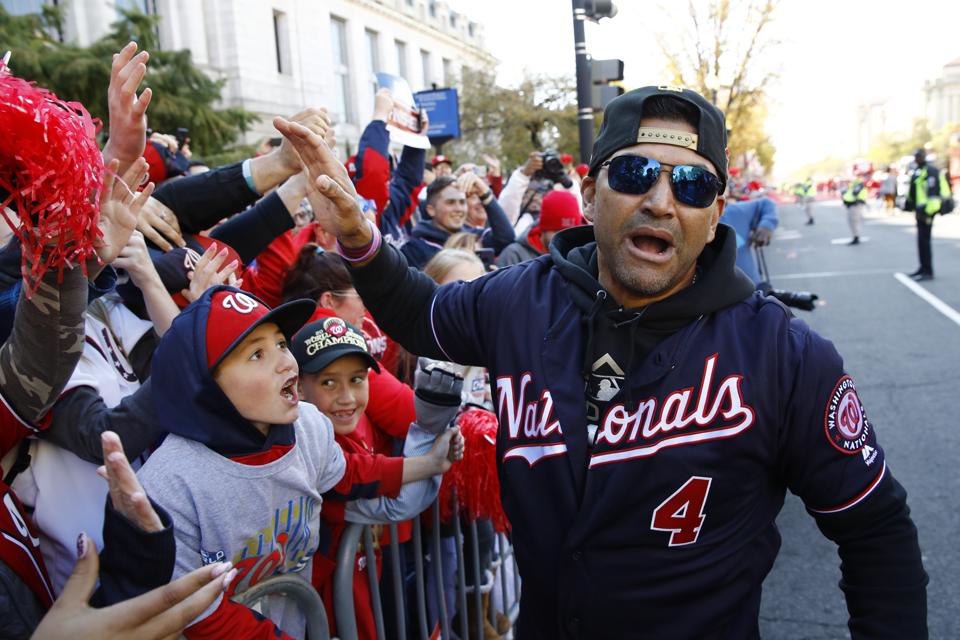 It was mentioned to Davey Martinez that his offseason has been very short. The Washington Nationals’ manager smiled at the thought.

“But it’s been a good offseason,” Martinez said.

The Nationals are still basking in their first-ever World Series championship after knocking off the heavily favored Houston Astros in seven games in October.

Washington’s chances of getting back to the Fall Classic also got a little bit better Monday when the Winter Meetings began at the San Diego Manchester Hyatt.

Right-hander Stephen Strasburg, the World Series MVP, was re-signed to a seven-year, $275-million contract Monday. That means the starting rotation’s big three will remain intact at least through the end of the 2021 season, when Max Scherzer’s contract expires.

“For me, it was an early Christmas present. It really was,” Martinez said. “I mean, you look at our pitching staff now, and we’re solid. We have four quality starters. Stras, the year he had and just the whole, just watching his whole career, to think that he’s going to end it here with the team he started with is awesome for him and his family.”

The Philadelphia Athletics boasted of having the $100,000 infield back in the 1910s. That seems rather quaint considering the Nationals now have the $625 million rotation.

Scherzer is five years into his seven-year, $210-million contract and left-hander Patrick Corbin just completed the first season of his six-year, $140-million deal.

That’s not even including Anibal Sanchez, who will enter the second year of a two-year, $19-million contract in 2020. Of course, in terms of the rotation, Sanchez’s money is akin to the amount of coins someone might find between the couch cushions.

While the Nationals’ rotation is talented, Martinez also had to count on his starters more than ever this year as his team played 17 games in the postseason. Washington will try to avoid those pitchers having a potential hangover at the start of next season by altering their offseason workouts.

“We talked a little bit about pushing their program back a few weeks and not start throwing too soon,” Martinez said. “I know some of these guys like to start to throw in December, maybe wait until second week of January. But I want them to understand that there are a lot of games to be played in March and April, and we’ve got to be ready to play those games, so they’ve got to be ready to open up and give us the innings we need.”

The Nationals finally broke through this year after being eliminated in the division series round four times in a six-year span from 2012-17.

Martinez, though, isn’t concerned about his team having a letdown in 2020. In fact, he initially gave a two-word answer when asked how he will approach next season.

“We went 1-0 all year. The message is going to be clear: Hey, we’re not going to sneak up on anybody this year, that’s for sure. So, we’ve got to be ready to go from day one. With that being said, I want them to understand, hey, we’re going to do business like we’ve done in the past, and we’re just going to try to go 1-0 every day. Why change something that works?”

Something else working well is Martinez’s heart. He was away from the team for four days in September after undergoing a cardiac catherization procedure.

Martinez was told by doctors to avoid stressful situations when he returned to the dugout, which was impossible during the final stages of the pennant race then the postseason. However, the stress level has gone down since the last out of the World Series and got a little bit lower Monday with the news Strasburg was coming back.

“I took my final test. Everything came back negative, and I got a clean bill of health,” he said.