Breaking
A Technology Solution For Muni Bond Disclosure
Your Floss Pick Habit Is Killing The Planet,...
Customer Service Recovery: Six Keys To Turn Complaints...
How Becoming A Learning Organization Is Key To...
IRS Increases Enforcement On Cryptocurrency: What This Means...
Optimus Prime Finally Gets The Diaclone Update He...
No, There Isn’t A Black Hole At The...
The Fed Could Be Repeating This Key Mistake...
Japanese Lawmaker Becomes Billionaire By Selling E-Signature Services...
Communication Lessons From The Presidential Debate
4 Tips For Attracting Your First ‘Dream Client’...
Want To Generate More Sales This Holiday Season?...
Your ‘Harvest Moon’ Moment Is An Illusion: Why...
Launching A Startup Comes Down To Making A...
Google Meet’s Unlimited Calling Will Continue To Be...
The Need For Speed-Is Quantum Computing A Good...
Home Business Should Brands Should Stay Away From Using “OK Boomer”?
Business 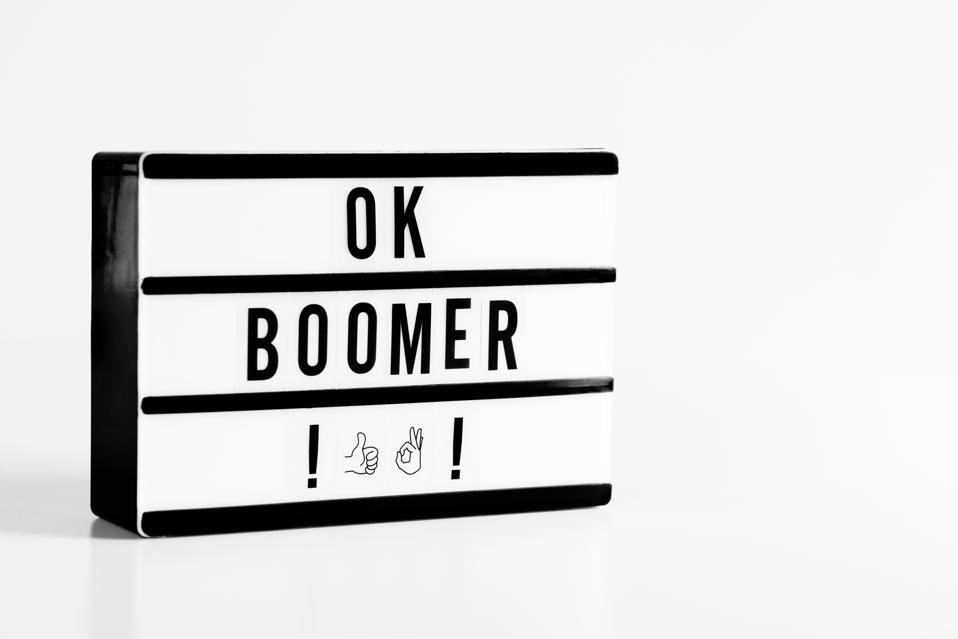 If you thought “bye Felicia” was annoying, you’re probably not too thrilled about the latest viral phrase to captivate the Internet: “OK, boomer.” The “OK, boomer” meme originated on TikTok by Gen Zers who are disgusted with condescending older generations, a trend the New York Times first reported on at the end of October.

When a video surfaced of an anonymous older man shading a 25 year-old colleague, the retort was given even more Inter-fame.

Brands that leverage the popularity of “OK, boomer” could inch dangerously close to crossing the line with their boomer buyers. It’s one thing if your 16-year-old niece doesn’t understand you, but if the brands you buy from mock your perspective, well, that’s just a recipe for brand loyalty disaster.

“Ok, boomer” punctured the digital ecosystem first. Brands ranging from Netflix and Four Loko to Natural Light and Planters took advantage of the phrase’s favorable social media standing, especially among younger demographics. Fox made a beeline for the United States Patent and Trademark Office, recently declaring “bona fide intent” to launch a TV series based on the phrase.

Erase everything you thought you knew about baby boomers…

As the Heartland agency, we deal with stereotypes all the time. It’s tempting to lump a staunch and outdated ideology with the image of the Heartland, but, as with many things, this matter isn’t black and white. A prevailing school of thought originated under the assumption that Heartlanders are synonymous with baby boomers: elderly, white, and backwards.

Recent data suggests this couldn’t be farther from the truth. Political pundits claim that President Trump won the 2016 election thanks to a conglomerate of older, white voters in key states primarily located in the Heartland. Although baby boomers may have spent a majority of their lives in the Heartland, the largest concentration of baby boomers currently is in urban cities in states including New York, Texas, and Arizona, according to an analysis by FreddieMac.

Tracking the trajectory of a loaded phrase…

For all of the media coverage “OK, boomer” has been attracting, the overall movement lacks clarity and consistency. According to Google Trends, the top searches for the keyword include:

Today’s anti-generational debate is nothing short of routine tension, even though it may have been ignited by too many avocado toast jabs at millennials.

This has been happening for decades…

The past few decades have seen events like Occupy Wall Street, which aimed to address the poverty gap, and the NFL anthem protests spurred by various racial injustices, and an increase in climate change activism.

So, what do these contrasts mean for brands trying to satisfy both of these groups in their marketing efforts?

Brands need to reconsider their involvement

Like many of the protests before it, “OK, boomer” is rooted in a cause and calling out a generation for not handling their business. As marketers, we’re hopping on trends for a healthy hit of vanity social numbers, and diluting our brand messaging in the process.

At the end of the day, baby boomers and the Heartland are two sides of the same coin. Both get assigned different values based on who is flipping it. Don’t leave your marketing to chance. Let another entity tackle the “OK, boomer” divide.