Breaking
Everything You Need to Know About Corporate Social...
Is Adaptive Leadership the Key to Motivating Employees?
Why business events are set to return with...
Business events set to return with a bang!
Expanding Internationally: 5 Things to Consider for eCommerce...
How the Machine Shop Is Going Digital in...
Sustainable Food Packaging Is Helping the Hospitality Sector...
Top 5 Investment Practices To Make More Money...
Managing IT Requirements for SMEs: 5 Aspects that...
How To Build a Successful Luxury Brand In...
Finding The Best Google AdWords Consultant for Your...
8 Top Tips To Help Your Agricultural Business...
Three Reasons Why Office Décor and Design Are...
Looking To Improve Efficiency In Your Business? Here’s...
AI and machine learning for business
How Social Media Changed the World
Home Business Should Colleges Abandon SAT Score Requirements?
Business 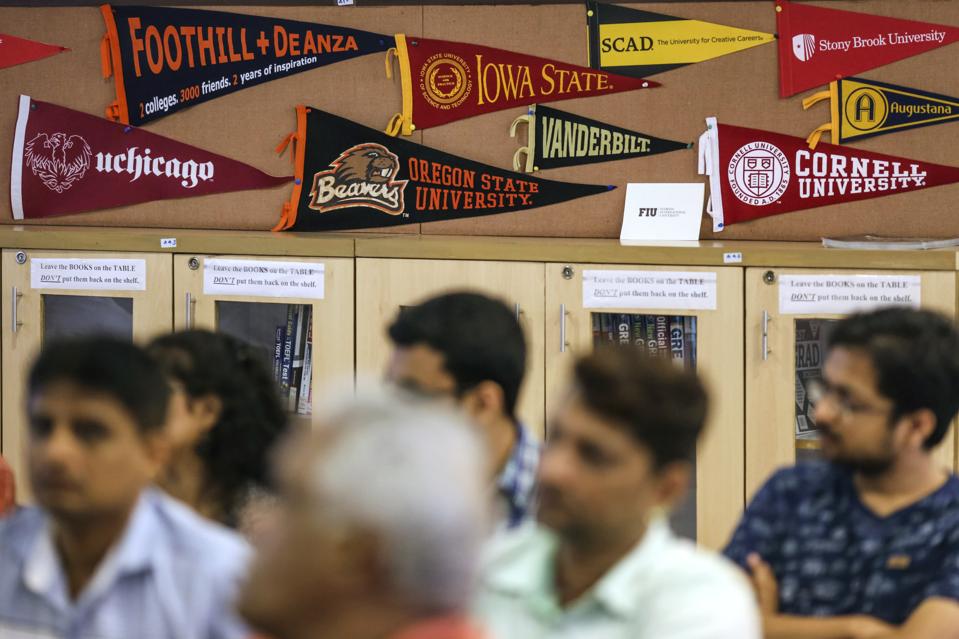 Banners of U.S. universities are displayed in a classroom as participants attend a counseling … [+] session given by the University of Southern California (USC) at the United States-India Education Foundation (USIEF) in Mumbai, India, on Wednesday, March 8, 2017. For decades, the U.S. has lured thousands of foreign students who’ve been quickly hired by the likes of Google Inc. and Microsoft Corp. Now the Trump administration is trying to slash immigrant visas, while Republican and Democrat lawmakers are introducing bills to curb the number of work visas. Recent violent attacks against Indians—several fatal—have raised the specter of physical danger among Indians who have fantasies of a life in the U.S. Photographer: Dhiraj Singh/Bloomberg

The Case Against Standardized Test Requirements

At the national level, researchers have found evidence that standardized test scores such as the SAT and ACT are worse predictors of a student’s success in college than other measures, such as high school GPA. At less-selective four-year public colleges, a student with a high GPA and a middling SAT score has a 62% chance of graduating within six years, while a student with the opposite credentials (high SAT score but mediocre grades) has only a 51% chance of graduation.

Though grading standards can vary enormously from school to school, high school GPA generally captures the sorts of behaviors that students need to be successful in college, such as showing up to class and turning in assignments. By contrast, standardized tests might measure how well students can cram before a high-stakes exam, but say little about long-term study habits and work ethic.

SAT scores are also not a precise indicator of student aptitude. The average student who retakes the SAT receives a score boost of more than 100 points, enough to meaningfully alter his college admissions prospects. (Most colleges only consider an applicant’s best scores.) If the same student can receive two very different scores on the same test, then the test might not make a reliable guide to how that student will perform in college.

The SAT and ACT also made an appearance in last year’s college admissions scandal. In October, a proctor pled guilty to fixing students’ scores in exchange for bribes. While such explicit cheating is rare, the scandal furthered the perception that standardized tests are rigged in favor of rich students who can use their resources to secure better scores on the exams. Evidence suggests the effectiveness of those infamous SAT coaching and exam-prep courses is overblown. But the appearance of unfairness alone might be a reason for colleges to consider dropping their test requirements.

The Case For Keeping Standardized Tests

Proponents turn this argument on its head. The SAT and ACT are a relatively low-cost way for disadvantaged students to demonstrate their preparedness for college, at least when compared to joining the crew team or taking bassoon lessons.

“For any given high school GPA, a student admitted with a low SAT score is between two and five times more likely to drop out after one year, and up to three times less likely to complete their degree compared to a student with a high score,” the report argues.

Dropping a standardized test requirement necessarily means that admissions committees must rely more heavily on high school grades. But if grades become the metric by which applicants are judged, high schools will have an incentive to hand out A’s like Halloween candy. Grade inflation of this sort could destroy high school GPA’s usefulness as an indicator of student aptitude.

Even if admissions committees believe high school grades are the best measure, SAT scores can still be useful as a check against grade inflation. If a student’s GPA differs wildly from his SAT score, perhaps that should raise eyebrows. But admissions officers might not get the chance to compare the two metrics if they jettison their standardized test requirements.

There are certainly valid concerns about the worth of SAT and ACT scores in the college admissions process. For now, they’re still useful enough to justify maintaining standardized test score requirements. But they’re far from perfect, and colleges should actively work to seek and develop alternatives.

Mike Bloomberg Has Spent 1,200% More Than Bernie Sanders On Facebook Ads In 2020

How To Watch Or Live Stream UFC 247