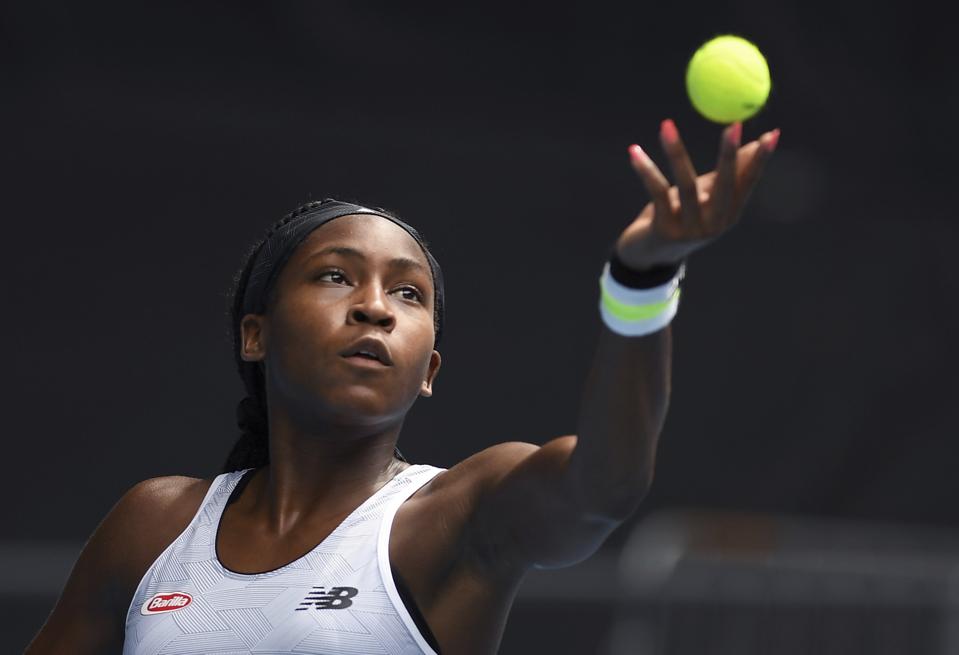 Coco Gauff doesn’t shy away from a moment. Poised when on tennis’ biggest stages. Confident when at a public event. America’s young tennis darling has shown a maturity, even at age 15, that spills into every aspect of her public persona. Still, though, the young star remains approachable, full of personality.

That combination has given Gauff the ability to earn high-pressure victories — wins on Wimbledon’s Centre Court or Australia’s Rod Laver Arena — but also make about 100 youth at an event in Everett, Washington, ahead of her first Fed Cup appearance with the United States, feel at ease.

Is it difficult, then, to serve as a role model at age 15? “Definitely not,” she says during a one-on-one sit-down interview. “I remember the kids’ day we did two days ago, and it is pretty cool to see how many were excited to see me. Some were close to my age. I am thankful for the platform I have been given and not even just kids, but adults are seeing something in me.” 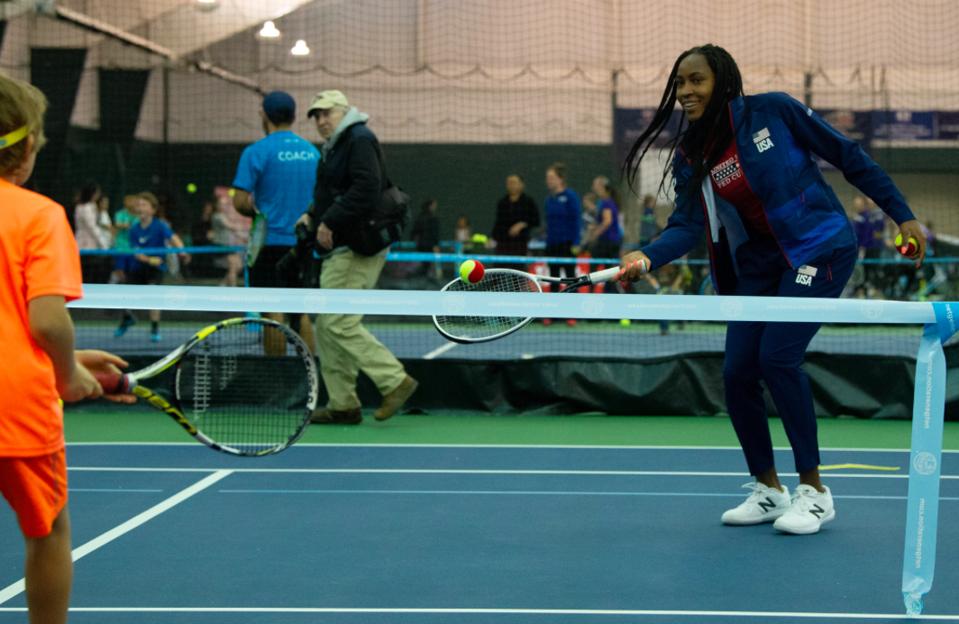 Gauff is no stranger to high-level tennis. Or attention. She’s traveled internationally for years, training for a period in France, winning junior tournaments the globe over, joining the U.S. junior Fed Cup team and capturing junior Grand Slams. While New Balance signed her to a deal as a 14-year-old in 2018, Gauff really became part of American culture in summer 2019 when she became the youngest player to earn her spot in the main draw of Wimbledon by working through qualifying and then beating her idol, Venus Williams, on No. 1 Court in front of a packed — and loud, by Wimbledon standards — stadium in the first round. She went on to capture more victories at Wimbledon, at the US Open later that summer and then again in 2020’s first major in Australia, which included a victory over Naomi Osaka in the tournament’s largest stadium.

Her on-court success, coupled with her age and likability, has propelled Gauff into the vernacular of American sports popular culture. This newfound celebrity status has had an impact on Gauff, but she says she is handling it well, calling the scheduling the trickiest part of it all. “Figuring out the right times to plan things and, I guess, getting use to the recognition,” she says about the changes. “Those are definitely the biggest things.”

With her on-court success even in a scheduled limited due to the WTA’s age restrictions on the number of tournaments she can play, Gauff has risen to a career-high world ranking of No. 51 —not shying away from doubles, she’s ranked No. 42 in that discipline — and enough on-court clout for U.S. Fed Cup captain Kathy Rinaldi to name her to the five-member Fed Cup team for the “tie” against Latvia in Washington Feb. 7-8. 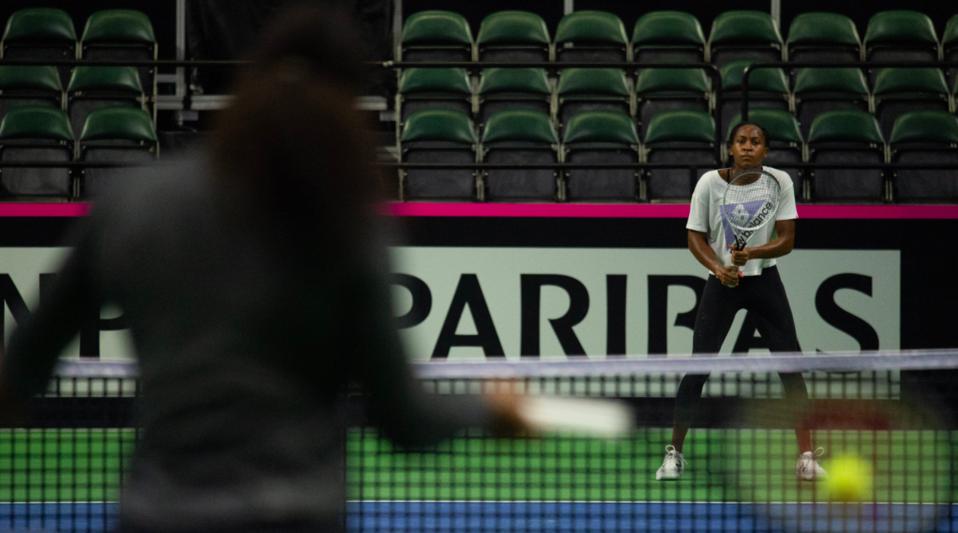 Coco Gauff practicing with Serena Williams ahead of the United States’ Fed Cup tie against Latvia in … [+] Everett, Washington.

Gauff knows she can absorb plenty during the weeklong experience. “Learning how it works and being able to play for my country is a good thing,” she says. “I’m excited to play alongside everyone, especially Serena (Williams). It is fun to practice and learn.”

During the week, Gauff had the opportunity to practice individually and collectively with the other members of the team, including Williams in a two-player session, recent Australian Open champion Sofia Kenin, veteran Alison Riske and nine-time Grand Slam doubles champion Bethanie Mattek-Sands. While Gauff says she isn’t trying to learn anything about Williams’ game while on the court with her — “I already know everything about her game” — she still understands the value of learning something every time she practices. Doing that with Williams opposite the net gives her ample opportunity.

Williams, though, hasn’t become just a hitting partner. Gauff says she has developed a close relationship with the 23-time Grand Slam singles champion and true veteran of American tennis. Williams calls it a great thing to play alongside the Fed Cup team’s youth. “I am always so excited to see young American players do well,” she says. “I am a little bit biased. It is always super exciting to play among the future of tennis and know it is a really strong flag they are carrying in a really high way.”

Gauff has experience to draw on everywhere she looks. She’s represented by Alessandro Barel Di Sant Albanoof the agency Team8, started by Roger Federer and his agent, Tony Godsick. Her endorsement portfolio, along with apparel and footwear maker New Balance and racket manufacturer Head, includes pasta maker Barilla, a longtime backer of Federer. From business to tennis, Gauff knows the value of Federer. 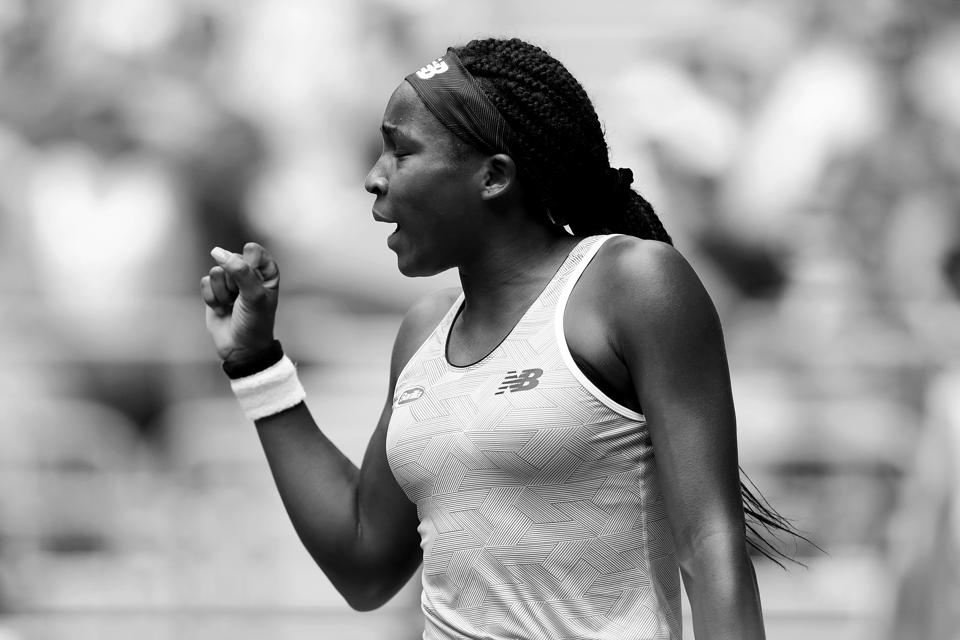 “Having insight on what Roger does definitely helps and while I don’t model him exactly on every point, I model some routines after him and how he handles himself,” Gauff says. “Being close to Serena and close to Roger is really a plus for me and an advantage I have to take care of.”

An area that Gauff must still take care of, though, that isn’t a part of most players’ routines: schoolwork. Coco’s parents Corey and Candi help with the logistics of life and Coco credits her mom, Candi, with helping her schedule, everything from international travel to events. Coco knows that being young and generally eating healthy helps her adapt to time zones and the rigors of elite-level training and performance, but the toughest part of the increased attention and schedule has been “finding the right times to do school,” even if she often gets it done between her morning and afternoon practice sessions, unless, of course, she procrastinates and ends up hitting the books late at night.

“The time zones are tough when I have to do school,” Coco says. “When I want to call my teachers, they’re sleeping. Everything else has been easy to adjust to.”

It fits that for a 15-year-old making waves in tennis — and doing it with poise — she wouldn’t follow the normal routines of everyone around her. With that, she signed an endorsement deal with New Balance at age 14, bringing the Boston-based brand to the limelight, alongside NBA Champion Kawhi Leonard, wearing all-white at Wimbledon. Then came her time to shine, from a fashion point of view. Even before Gauff qualified for the US Open, New Balance had partnered with New York fashion label Gitman Vintage to design on-court apparel for the 2019 U.S. Open. Part of the kit included a pattern that depicted public tennis courts around New York City. New Balance, of course, played up that pattern for Coco, putting her in a distinct tennis court dress for the Open. 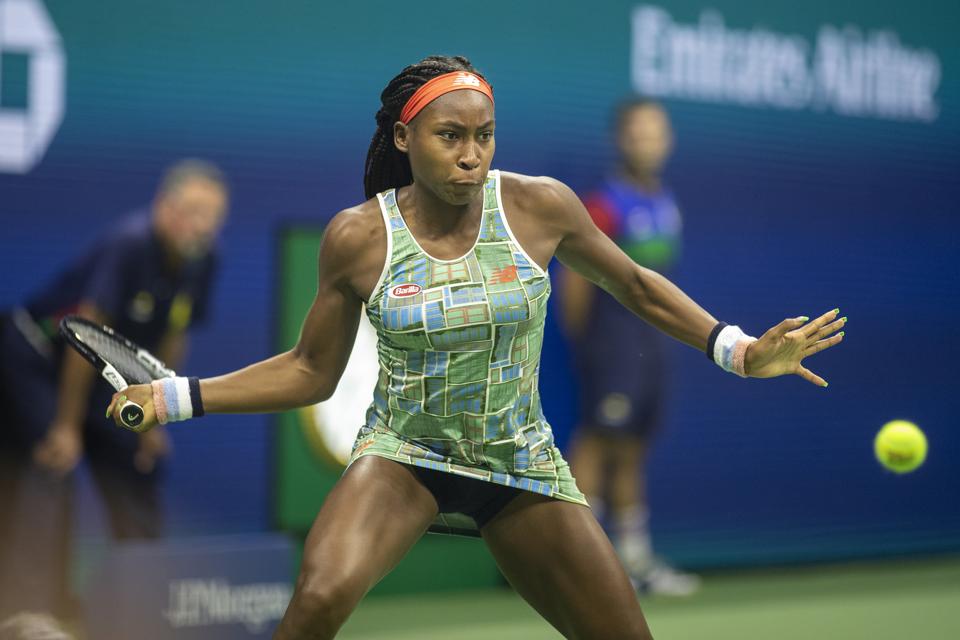 Coco Gauff on Arthur Ashe Stadium during the 2019 US Open. (Photo by Tim Clayton/Corbis via Getty … [+] Images)

“It was definitely different than everybody’s outfits,” Coco says. “It was nice to have something special for me. That is the first time I have gotten that treatment.”

Having the public tennis courts of New York City was not only a connection to the tournament’s home city, but also to Gauff personally, having grown up playing on public courts in Florida, near her hometown of Delray Beach. The relationship with New Balance has proven strong, with the company creating “Call Me Coco” T-shirts and ad campaigns, seen both in New York and Melbourne, Australia.

“The biggest thing is I hope to create some stuff with New Balance. I don’t know if it is going to happen,” she says with a laugh. “They always ask me for my input on color schemes and all that, maybe because I’m young and they are trying to market their stuff toward youth. I can give them insight on what is ugly and what’s nice.”

A “set” of questions for Coco:

1. The celebrity who reached out to you that surprised you most?

2. How do your younger brothers, Codey and Cameron, handle the attention you receive?

They are like “whatever,” they don’t care at all.

3. What do you do on plane flights?

5. Are you binge-watching any TV shows?

I just finished “You” and mostly stuff on Disney Plus, anything from the old Disney Channel.

Right now, it is potato chips and a Diet Coke. Not good at all for an athlete, I know.

The Hottest Tickets At Sundance?Underwater VR And One-On-One Experiences

Mindset Matters: How The New Power Brokers of...

Everything You Need To Look For When Considering...