Breaking
Expanding Your Business Into Spain: What You Need...
Essentials For Your Office Coming Out Of COVID-19
What Can Marketers Learn From Digital Cults?
Why NASA’s James Webb Space Telescope Will Never...
Increasing HR Effectivity and Efficiency through Software Solutions
The Difference Between Building A Startup In Bull...
Fluor Corp Ranked Among Today’s Top Shorts
Common Pitfalls to Look Out for When Buying...
Will the Olympics go ahead this year?
Pack Up the Big Top: Insights from MozCon...
Best WordPress Themes for Blogs
Get Ready To Rip And Tear, As The...
As Economy Recovers, Loan Approval Rates Increase For...
Lessons Learned—Avoiding The Fundraising Errors That Can Sink...
Top Tips to Help You Effectively Manage Your...
Malaysia’s Carsome, Tycoon Patrick Grove’s Catcha Group To...
Home Business Six Weeks After Surgery, New Orleans Pelicans Still Waiting On Zion Williamson’s Debut
Business 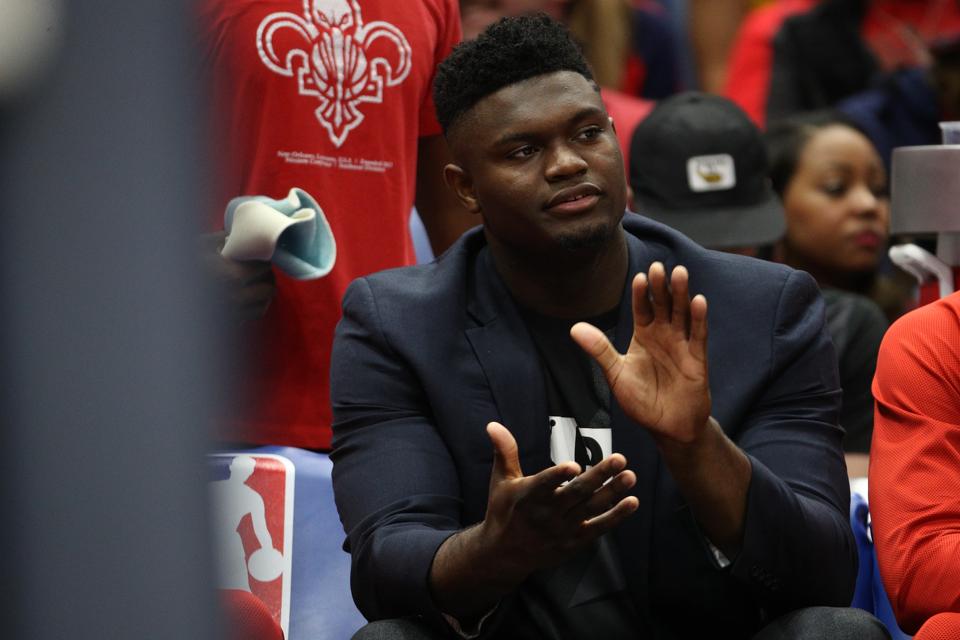 NEW ORLEANS, LOUISIANA – NOVEMBER 27: Zion Williamson #1 of the New Orleans Pelicans sits on the … [+] bench during the game against the Los Angeles Lakers at Smoothie King Center on November 27, 2019 in New Orleans, Louisiana. NOTE TO USER: User expressly acknowledges and agrees that, by downloading and/or using this photograph, user is consenting to the terms and conditions of the Getty Images License Agreement (Photo by Chris Graythen/Getty Images)

The debut of Zion Williamson tops all Christmas wish list for fans of the New Orleans Pelicans. It now appears they may have to wait until the calendar turns to another decade before Williamson takes the court. The news is another lump of coal in this stocking stuffed season (and decade) of depressingly close calls with little in winning results.

Alvin Gentry relayed that Williamson has yet to resume on-court activities. The update is all the more relevant coming six weeks after Williamson had surgery. The initial window for a return was six to eight weeks though it seems doubtful that Williamson is rushed back in the next few weeks.

Gentry gave the Williamson update after practice Monday saying, “I don’t think it’s anything that can be rushed. I think it’s a time thing. Six weeks is what we said, but obviously, he’s making progress. When the time comes for him to start on court and do things like that, he will. It’s not anything that’s going to be rushed or any shortcut. It’s a matter of taking the time to make sure he’s fine.”

Still, the New Orleans Pelicans expect Zion Williamson to return to the court this season. Alvin Gentry said previously that he expected Williamson would be back in the lineup by December. David Griffin has said Williamson is on schedule with his progress. However, there is yet to be a targeted date for Williamson’s debut.

A playoff appearance was never a priority but a push to contend this season is still likely. Even though he is a 19-year-old rookie, Williamson will help fix most of the problems leading to these close losses. The biggest benefit to the team will be his presence in the paint. Bringing fans back into the fold with wins would a nice side effect of his return.

The Pelicans have run only 64 post up plays this season, resulting in 24 made baskets in 46 attempts. These were mostly run for Derrick Favors in one game, with the rest being plays for Jahlil Okafor. Almost eleven percent of those plays ended in a turnover. Only three percent of those possessions end with an and-1 opportunity.

Favors has missed some games and will be eased back into the lineup. Jaxson Hayes does plenty of hustle work to find his points but he is not ready to be a featured facilitator from the post. Williamson will be encouraged to call for the ball and brute force his way into several and-1 opportunities per game.

The Pelicans’ kick-out game is near the best in the league when measuring assist percentage from touches in the paint. His gravity on offense should open more space for the team’s shooters. His presence near the paint should deter most opposing guards from driving the lane. His availability will mean less reliance on small-ball lineups, simplifying the rotations for Alvin Gentry.

The rehab process is even more simple. Williamson cannot brute force his way on to the court though. The team will be ‘overly cautious’ with his rehab process for good reason. This season is not the priority. Gentry said the team sometimes must protect players from themselves. Still, no one can be faulted for looking forward to Williamson’s debut.

In the middle of a lost season, Williamson’s debut could be the last great moment in the last season of the decade.