SMART Drumlines At Réunion Island Do Not Attract Bull Sharks

Réunion Island was once known as a “surfer’s paradise,” for its killer wave action and beautiful turquoise waters. An overseas region under the jurisdiction of France, it is located in the Indian Ocean with 108 miles of beautiful coastline and was a ‘go to’ vacation spot for many. However, in the last decade the region has gotten a new moniker that has kept many people from getting into the waters: ‘shark attack hotspot.’

Bull sharks are infamous for their ability to venture into brackish and freshwater ecosystem, making … [+] international headlines when they venture far inland through rivers.

Since the 1980s the island of Réunion has undergone expansive development of its western shores, which subsequently increased irrigation for agriculture and created more fresh water flows that pushed the sharks westward. Researchers have previously found that between 2010 and 2016 shark bite numbers increased during the winter months (June, July, and August since the island is in the southern hemisphere) and that most happened on the west coast in the evening hours and weekends. “This is totally related to the sharks’ behavior, and sharks preferentially attacked isolated swimmers and surfers,” FIU marine biologist Jeremy Kiszka told Phys.Org. “At dusk and dawn – especially at dusk – they tend to forage closer to shore.”

Despite humans being part of the problem, the blame has been solely put on the sharks and after the fifth fatal bite in July 2013, growing pressure from beach user associations and the local economic sector forced the authorities to do something. Shark nets were installed, a shark-patrol system was created, and sharks around the island were sometimes even culled. But the authorities also decided to implement an experimental shark control program that used baited lines that had a real-time alert system to enable those in charge to rapidly respond to any catch. Named the Shark Management Alert in Real Time (SMART) drumlines (SDL) four of them were deployed for twenty hours a day for four days a week from January to November 2014 in an effort to capture bull (Carcharhinus leucas) and tiger sharks (Galeocerdo cuvier). 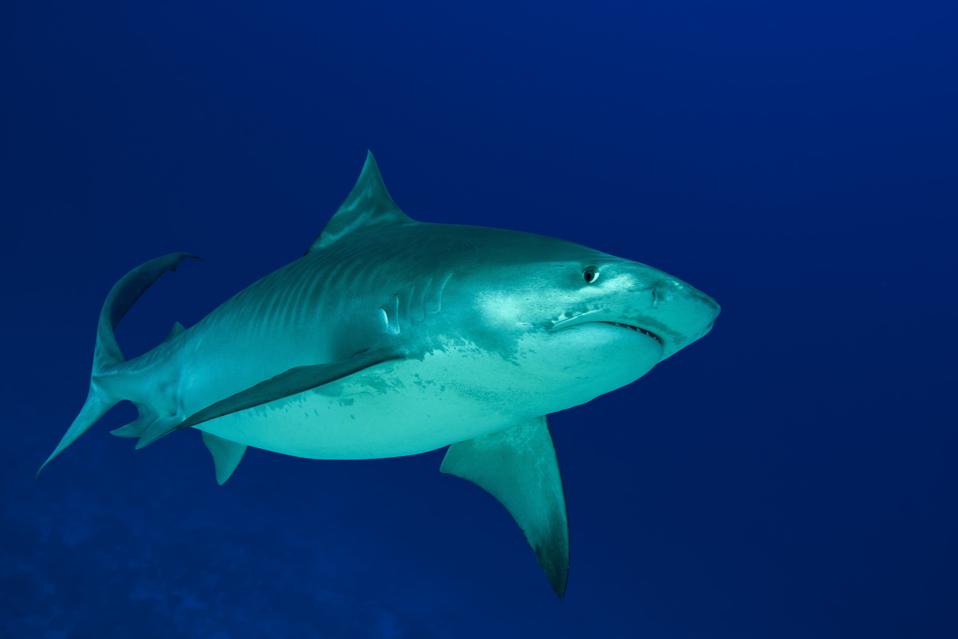 But would the baits and the associated catches attract sharks inshore and increase the chances of them coming into contact with sea users? A study by the KwaZulu-Natal (KZN) South African Sharks Board found that there was no increase in catches of tiger sharks at protected beaches more than a decade after drumlines were introduced. And while South Africa isn’t that far away from Réunion geographically, could the same be said for the sharks in this island region? A new study has set out to do just that, by investigating the movements and behaviors of bull and tiger sharks at Réunion.

Large shark species such as bull and tiger sharks are highly mobile animals that use their habitat depending on a variety of environmental conditions such as sea surface temperature, salinity, and season. Bull sharks are infamous for their ability to venture into brackish and freshwater ecosystem, making international headlines when they venture far inland through rivers. Commonly living near tropical shorelines, they can get up to 11.5 feet (3.5 meters) in length and weigh up to 500 lbs (227 kg). Tiger sharks are even bigger, measuring up to 14 ft (4.3 m) and weighing up to 1,400 lbs (635 kg). Named for the dark, vertical stripes on their bodies that resemble a tiger, they are also seen in tropical and sub-tropical waters worldwide. Known to have an undiscerning palate, they join bull sharks and great white sharks (Carcharodon carcharias) as the “Big Three” in the shark attack world because of their large size, teeth anatomy, and range.

Of the 42 bull and 56 tiger sharks tagged between October 2011 and September 2014, only 19 bull and 19 tiger sharks were detected in either the Saint-Paul Bay (SPB) network or in the network of ten other receivers, termed the CHARC network, during the study period. The battery life of these acoustic tags was 538–845 days, resulting in a varying number of sharks with active tags. Unfortunately, there was insufficient acoustic data from the tiger sharks for any analyses. But the study found that bull sharks spent less time in nearshore waters when drumlines were deployed, and their presence was influenced by sea surface temperatures (SST), rainfall and time of day. According to the study, there was also no significant difference in the number of detections of bull sharks in SPB compared to surrounding areas before, during or after SMART drumlines deployment. Additionally, the results show that neither the presence nor the type of bait significantly increased the presence of tagged sharks or the duration of their visits, in both the short- and long-term. That means that SMART drumlines deployed without chum and baited with small, whole, low-fat fish cannot be considered as “shark magnets,” as many have feared. 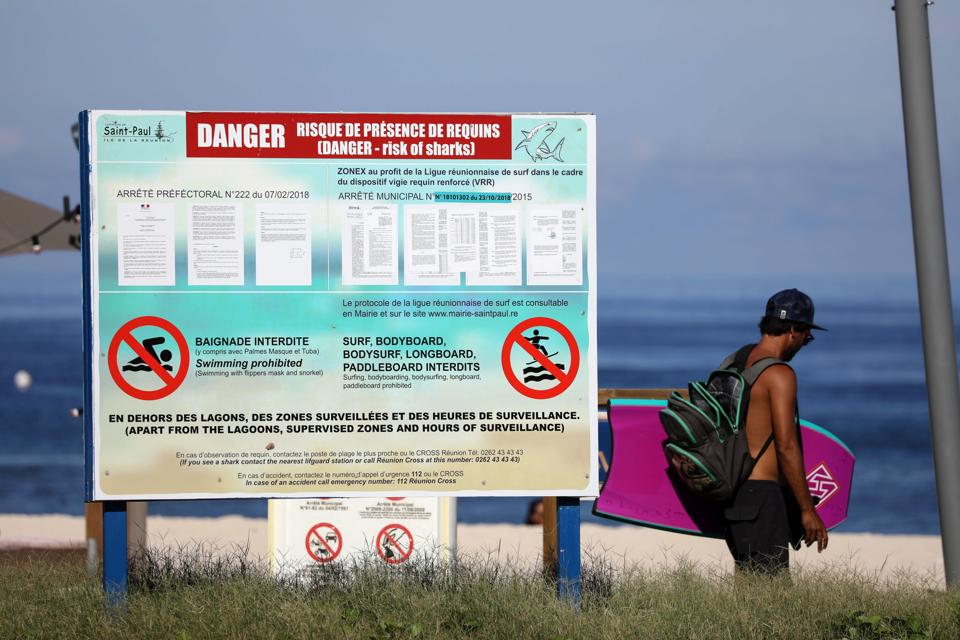 A man carrying a bodyboard walks past a sign banning swimming, surfing and other water sports at … [+] Saint-Gilles-les Bains, on the Indian Ocean island of La Reunion, on February 24, 2019. – A fisherman was killed by a shark in January 2019 in the commune of Sainte-Rose, east of the island of La Reunion, in the 23rd shark attack since 2011. More than half of these deadly attacks involved surfers or bodyboarders. (Photo by Richard BOUHET / AFP) (Photo credit should read RICHARD BOUHET/AFP via Getty Images)

While the SMART drumlines do not attract sharks to this area, as evident from this research, they are also not perfect in catching all sharks there. Although the Reunion Island shark control program seems to have a higher overall efficacy in catching targeted species, it is not some sort of impenetrable barrier against sharks there. The authors suggest additional techniques, like the usage of drones or in-water surveillance by cameras or sonar, should be used to continue monitoring shark behavior at Réunion. It makes sense, as scientists and stakeholders will need every insight they can get to implement effective shark bite mitigation strategies.