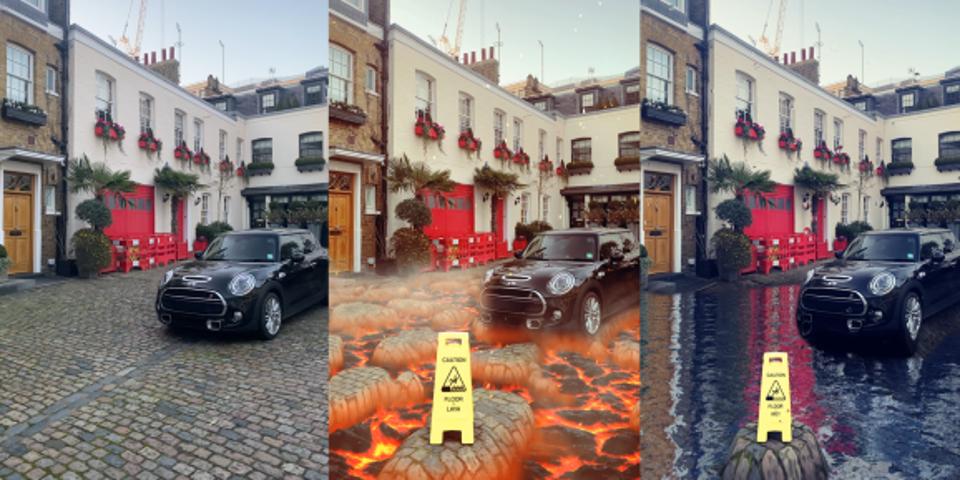 New lava and water Lenses developed by Snapchat use ground segmentation and machine learning to … [+] replace the ground with liquids.

Snapchat is expanding its arsenal of Lenses that alter the look of users and the environment, and in doing so is quickly becoming the leader in augmented reality. While Snapchat’s communication tools place the app in the realm of social media, it’s not hard to see why it calls itself a “camera company.” Recently, the app released two fascinating ground replacement Lenses — one for bubbling lava, and one for reflective water. “The floor is lava,” takes on a whole new meaning now.

Such technological witchery alters a range of terrains, from streets to carpets, through a combination of segmentation technology and machine learning, which understands geometry and semantics in order to isolate obviously ground-based objects from contrasting backgrounds, per VentureBeat. It’s undoubtedly a cool addition to Snapchat’s Lenses selection, which boasts playful AR like sky segmentation, Time Machine, and Cameos. By unveiling a steady stream of innovative and fun Lenses, Snapchat increases brand recognition and engagement with the app. But it’s doubtful that the camera company is developing these exciting new features just for our amusement.

Snapchat often follows a pattern when it comes to new Lenses: launch creative new features as consumer products, and then monetize them once they’re out there being played with by users, according to a Snapchat spokesperson, which means you can probably expect a brand to build a ground segmentation AR ad campaign on Snapchat in the near future. More cool features on the app can lead to more user growth, which can lead to more money from advertisers. Seeing as how nearly all of Snapchat’s revenue comes from advertising, this method seems like a good practice. And despite the best efforts of marketers around the globe, people still tend to ignore and dislike advertisements, especially ones that aren’t relevant to them. Has Snapchat begun to crack the code on how to get users to actually want to interact with ads? Maybe, but maybe not.

Snapchat has seen success with branded Lenses in the past. For example, on Valentine’s Day, Snapchat partnered with Papa John’s to promote the pizza chain’s heart-shaped pizza. Very much in tune with a culture that absolutely loves pizza, the sponsored Lens show heart-shaped pizzas coming out of the eyes of the user and other playful, Valentiney art. The Lens also opened a pizza ordering experience, which both drove pizza sales and lifted brand awareness. A quarter of users who swiped up in the Lens purchased a pizza.

“We are at the beginning of building out our AR ecosystem for brands and providing additional value beyond paid media,” said Jeremi Gorman, Snap’s chief business officer, during 2019’s Q4 earnings call. “For example, this quarter we announced that McDonald’s and Coca-Cola are the first brand partners to utilize our Scan camera search technology. Our Scan feature combines visual search and augmented reality by recognizing images through the Snap camera and providing AR lenses related to what the camera is focused on—in this case, the well known logos of McDonald’s and Coca-Cola. These initiatives complement our existing marketing campaigns and link digital content to the physical world.”

It’s not just Coca-Cola and McDonald’s now. A trip to the junk food aisle of the supermarket could lead to fun interactions with KitKat, Hershey’s, PopTarts, and more.

Snapchat also recently partnered with Tate Britain, The National Gallery and The Bank of England to celebrate the launch of Britain’s new, polymer £20 notes, according to Social Media Today.

This is a whole new world of promotion, whereupon users can use AR to unlock deals and discounts, as well as interact with brands. A good combination of utility and entertainment could be a recipe for AR advertising success.

Augmented reality is an effective tool when it comes to brand recognition and engagement. AR accounts for nearly double the amount of visual attention in the brain as non-AR tasks; it elicits a ‘surprise’ response in the brain, which essentially creates an emotional connection to the experience; and whatever information is stored or encoded into memory is 70% higher for AR experiences.

“There’s a big benefit to being entertaining in advertising,” said Ara Parikh, product marketing manager for OmniVirt, a 360 degree/3D immersive ad platform. “With something like AR, which is incredibly interactive, it leads people to actively engage with the brand versus passively scrolling. A lot of display ads lead to banner blindness. But with AR, if you opt into it, you’re actually choosing to play with a brand’s content, which is a lot different than just scrolling past an ad, with the brands hoping for that one second of you somewhat paying attention to the ad, but probably not.”

Parikh said that deeper engagement is really important for the ad industry today if brands want to create experience that truly invites the customer to actively engage with them.

“But I will say that when it comes to AR campaigns in general, one of the friction points is that you have to grant them access to your camera,” she said. “That stops a lot of people from clicking in.”

One could imagine that older generations are less likely than younger ones to engage with AR, and that’s especially true for Snapchat, with 90% of all 13 to 24 year olds and 75% of all 13 to 34 year olds making up the app’s user base. For teenagers in the United States, Snapchat is the most important social network of their generation. More than 70% of daily active users play with Snapchat’s Lenses everyday, spending a total of 250 million minutes playing with AR per day, according to a Snapchat spokesperson. Advertisers looking to create brand loyalty among younger generations might be the types of brands you’ll see running campaigns on the platform. But brands might need to set their sights on even generations younger than Gen Z.

When asked if she likes to interact with sponsored Lenses, a 20-year-old Cortland University student and Snapchat-lover, Rose (last name left out to preserve anonymity), said, “Preferably not. Most of the people I know don’t really use filters on Snapchat, but that depends on how involved you are on social media and with appearances. I think using filters is fun, but I don’t usually use them because they alter my facial structure too much.”

Rose often uses Snapchat as a form of texting, sending photos that don’t try to be appealing, and are often even unflattering, to friends along with the text of the message. “The Lenses that are popular are often geared towards having softer skin and bigger eyes. I think they target young girls and make them feel less pretty without the filter.” Gen Z is a generation that values authenticity, and that spans across no-filter photos to the way they like to be marketed to.

“I think engaging with a brand via Snapchat is a younger generation thing,” she said. “My generation is very tech-involved, but we have a nostalgia for the Millennial way of life. The younger generation was thrown right into it. They didn’t have a transition period. I think they’d be more likely to interact with brands because that’s just the language they speak. Social media is their whole life.”

14 Experts Predict The Most Impactful Tech To...