Breaking
England Plunged Into Second Lockdown From Bonfire Night
This Young Entrepreneur’s Goal: To Make Healthy Foods...
Fruit And Vegetable Spoilage Is A Hidden Cause...
Blasingame’s Law Of Urgency
This Is Why Entrepreneurs Who Settle For ‘Good...
Nature Has Economic Value That Needs To Be...
Damwon Gaming Win The ‘League Of Legends’ World...
Is Stock Market Signaling Recession Extension? Unemployment Data...
Leaks Point To New MacBook Silicon, MacBook Pro:...
What Every Dog Wants This Halloween, BarkBox AI...
IQVIA Killing It In The Drug Trials Business
This Mother Of Four Tapped Her Talent For...
This Mother Of Four Tapped Her Talent For...
New Study Reaffirms: Increased Health Literacy Leads To...
Why The Retirement System Is Like The Cereal...
Imposter Nurse Received Millions, Now Sentenced To Prison...
Home Technology Snowflake CEO Frank Slootman Talks IPO Pop: Narrative Of Lost Billions Is ‘Nonsense Talk’
Technology 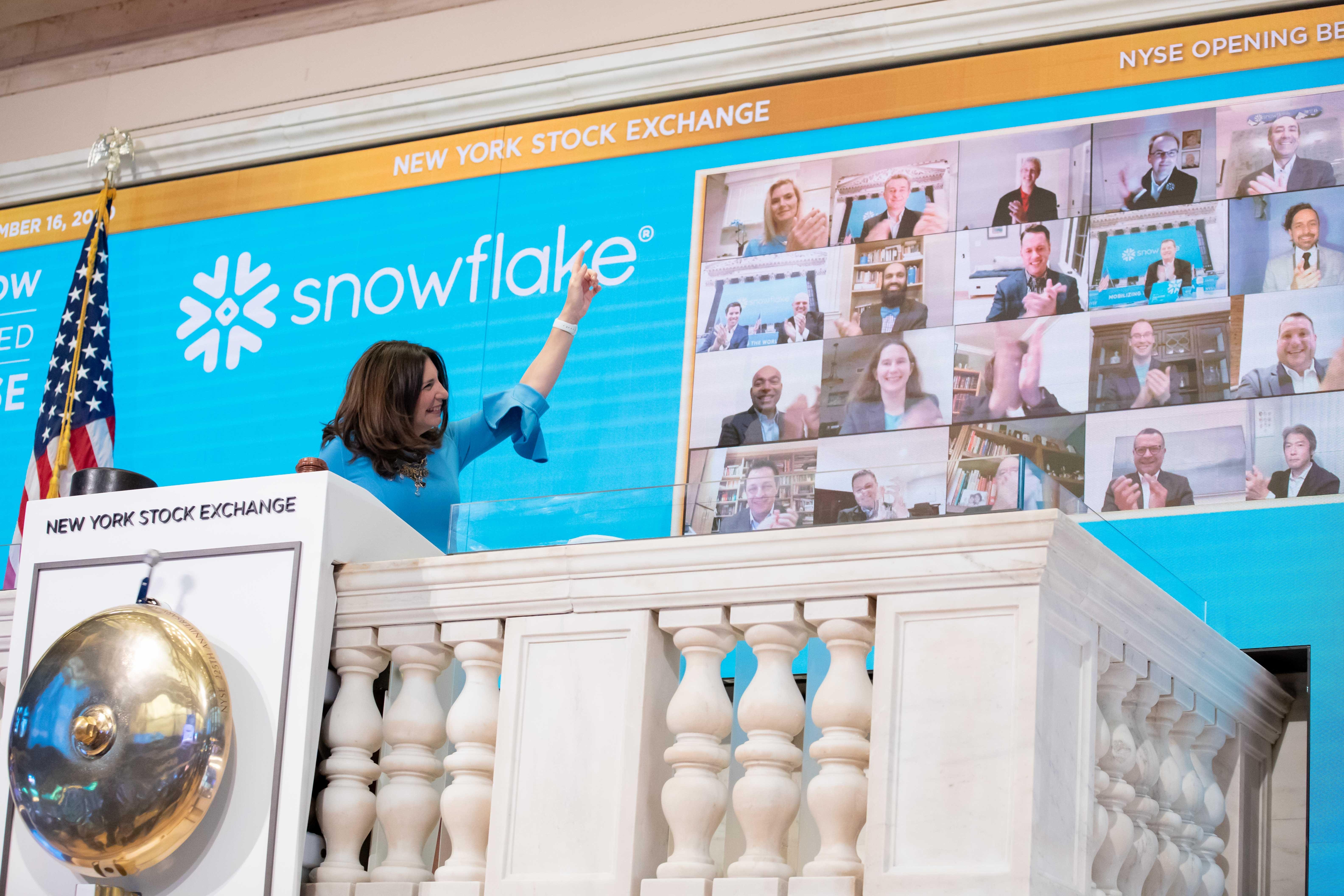 When Snowflake went public in the largest software IPO of the year on Wednesday, industry insiders plugged in (perhaps overly so) to a rising public debate about the efficacy of traditional listings waited eagerly.

By many counts, Snowflake’s debut moments were a smash success. The company had revised its initial pricing range several times, listing at $120 on Monday night, giving it an implied market cap of nearly 3x its previous private-market valuation. Snowflake wouldn’t begin trading until nearly 1pm ET as demand for shares drove its opening trades as high as $245. Such a lofty price implied a market capitalization of about $66 billion, more than twice its price the night before. Shares briefly reached $320 before setting in Thursday around $226, up 83% from Snowflake’s list price.

Speaking to Forbes on the afternoon of the IPO, Snowflake CEO Frank Slootman said the process had gone smoothly: Snowflake had prepared for a year, meeting with institutional investors and putting its ducks in a row for public scrutiny for months, including during its previous private funding round earlier in 2020, when the company underwent an intense pricing study as some early investors cashed out. Slootman’s third IPO after taking Data Domain and ServiceNow public, with many of the same key executives as in those processes, the roadshow had gone smoothly over Zoom, Slootman said.

“This is a very heavily vetted company,” Slootman told Forbes an interview on Wednesday afternoon. “The only problem today was that nobody wanted to be a seller because the conviction was so high.”

On Twitter, journalists and investors alike were already waiting for famed Midas List investor Bill Gurley of Benchmark to weigh in on that problem. Gurley, an investor in Uber and Stitch Fix among others, has become one of the most visible faces of a group of venture capitalists and technologists who consider traditional IPOs little more than a grift perpetrated by the process’s hire bankers to enrich themselves and their favored clients through what amount, effectively, to discounted shares. Last fall, Gurley hosted a private event in San Francisco encouraging investors and startups to pursue a direct listing, in which a company lists its own shares on a public market instead of issuing new ones, instead.

In August, the one-time analyst and blogger picked up the pen again to write his own analysis of the “structurally broken” IPO, comparing it to direct listings and a newly-trendy third option, going public through a special purpose acquisition company, or SPAC. (Overall, Gurley wrote he preferred “Door #2,” the direct listing, as “the simplest, most elegant, most fair.”) So when Snowflake reported in a filing that it planned to sell some shares to Berkshire Hathaway, while former CEO Bob Muglia sold Warren Buffett’s famed investment firm an additional sizable stake, Gurley spoke up, tweeting that Buffett would do well to invest not just in Snowflake, but every VC-backed IPO.

While some waited for Gurley to weigh in on Snowflake’s first day of trading (the thread arrived, like papal white smoke, later that evening), Forbes asked Slootman about the “broken IPO” argument. On the other side of the Zoom, in the conference room where he conducted the roadshow and led the IPO process, Snowflake’s CEO’s face grew visibly irritated. “Yeah, yeah, yeah, I keep getting this question, it’s sort of a natural thing,” Slootman said. But the question struck a nerve. Slootman proceeded to disagree with the premise of the bad-news IPO pop at length.

The key point for Slootman, as others have noted like in this essay by Andreessen Horowitz venture capitalists Alex Rampell and Scott Kupor, is that narratives around soaring first-day stocks and “money left on the table” fail to account for a demand curve. Taking Snowflake’s offering – about 28 million shares, not counting its private placements – Slootman argues that the price to move such a large amount of stock in one block will cost far more than it would to sell 100. While smaller buyers might have been willing to buy Snowflake at double, or even close to triple its list price, Snowflake wanted a price at which all the institutional investors with which it hoped to work would show interest.

“A lot of the direct listing chatter, they’re like, ‘you left money on the table.’ It’s complete nonsense,” Slootman said. “Now I could have moved the price higher, we certainly had the flexibility to do that. The reason we didn’t do that is I wanted to bring along the group of investors that we wanted, and I didn’t want to push them past the point where they really started to squeal.” Snowflake’s moving up its price range and list price repeatedly had already made those institutions “uncomfortable,” Slootman added.

One critique of such an argument has been that an IPO pop will create enough frothiness in a newly-listed stock’s price that the institutions counted upon to hold the stock for a long period will be tempted to cash out right away. (As Rampell noted on Twitter last night, someone needs to sell at some point for the stock to actually trade.) Gurley himself has argued as much, tweeting of an unnamed company with which he worked: “4 months after IPO, and only 10% of the IPO shares were still held. It’s ludicrous to think you can ‘control’ who owns your stock.”

But at Snowflake, Slootman said his pricing committee – including its venture capitalists – agreed with underwriters about its list price. Much of the volume pointed to as a sign of first-day flipping, he said, comes from retail investors repeatedly buying and selling the same shares.

“We could’ve scraped a few more bucks off the table, but if you think you could have sold this offering at $245, I mean, people are smoking something. That is just ridiculous,” Slootman says. “This whole DL [direct listing] conversation is completely intellectually dishonest because of the notion of a demand curve.”

Slootman’s other point: for his company, the IPO isn’t the end. “To me, it’s just to help the company deliver on its mission,” he says. “People think that the IPO is all about making money, and then we just go dig a hole in the backyard and put our money in there. Nothing is further from the truth,” he says.

With most of Slootman’s own potential ownership in Snowflake still tied to the company in the form of unvested options, that point resonates more, though Slootman also insists he’s not motivated by personal wealth. Instead on the day of his third and biggest IPO, Slootman spent some of his moment in the spotlight to try to set the record straight.

“I don’t think your readers should get misguided,” Slootman said. “’Oh, they left $100 billion on the table,’” he mimes. “It’s just nonsense talk.”

Lovevery’s Founders Show Us How To Thrive, In Business And As Individuals, In The Pandemic