Breaking
Can You Settle Your Student Loans Or Negotiate...
How to Use Amazon Attribution For Ad Campaigns
How To Quickly Start And Scale Your Business
Terra Virtua: What NFTs Can Teach Us About...
5 Easy Steps To Prepare Content For E-A-T...
Physical Inactivity Linked To More Severe Covid-19 Infection...
The 2021 Estimated Tax Dilemma: What Tax-Return Pros...
Want To Digitally Transform Your Business? Start With...
How to Optimize Google My Business and Leverage...
Debunking Link Building Myths in 2021
How, When And Where You Can Gaze At...
SBA Opens $16.2 Billion Shuttered Venue Operators Grants...
What are the Essential Features of a Small...
Trends In Executive Recruiting That Will Help You...
The Growing Case For Banning Pesticides Linked To...
The Reopening High – But Long-Term Issues Cloud
Home Technology Soft Brexit On Track; Tory Win Likely Though Election Uncertainty Remains High
Technology 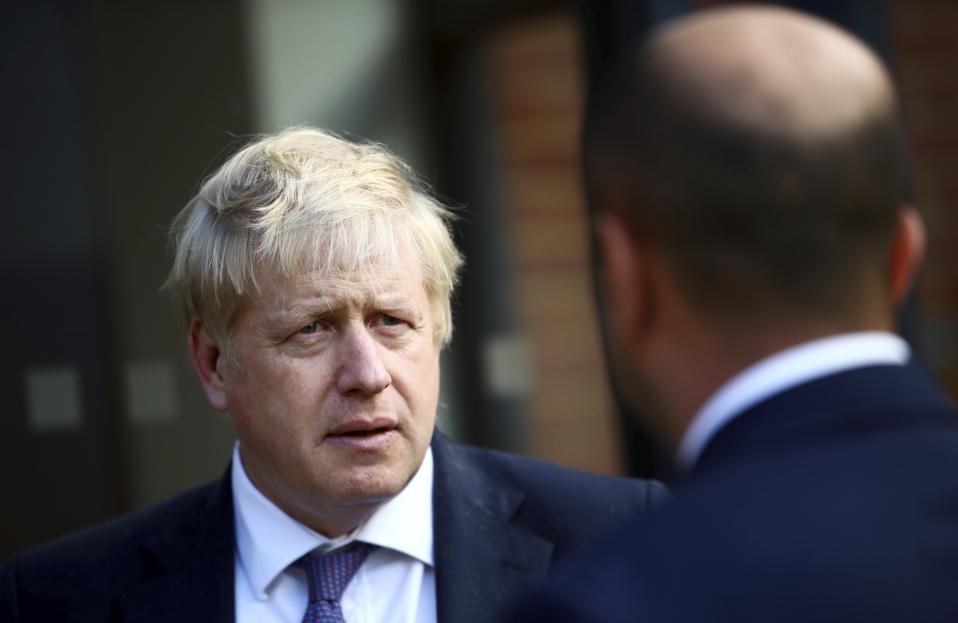 Despite substantial uncertainty surrounding the 12 December UK election, GeoQuant maintains its longstanding call that a soft (planned) Brexit is likely, as reflected in relatively low Institutional Stability Risk. PM Boris Johnson’s Conservative Party holds a strong position in polls that gives him a substantial parliamentary majority in election simulations. This is currently the likely outcome which, if it prevails, will produce a soft Brexit in line with the Johnson-EU agreement, establishing a customs union backstop between Britain and Northern Ireland. However, the House of Commons’ single-member district electoral rule can produce unexpected seat allocations when multiple parties are competing for one parliamentary seat at a time. This electoral uncertainty is exacerbated by the way in which Brexit splits the two largest parties, Tories and Labour, leaving voters uncertain over how their partisan vote will translate into parliamentary seats and, in turn, a Brexit policy. Given electoral coordination among the opposition, our previously highlighted possibility of a hung parliament, with no single-party majority, is well within the opposition’s reach. In that case, a coalition of the current opposition parties would have to bargain over Brexit next steps. That sort of coalition will comprise very soft Brexit advocates as well as EU Remainers. The compromise any such coalition will likely strike would be to offer voters an opportunity to choose between a soft, but defined, Brexit proposal and Remain in a second referendum. In that case, overall support for Brexit looks likely to prevail a second time. 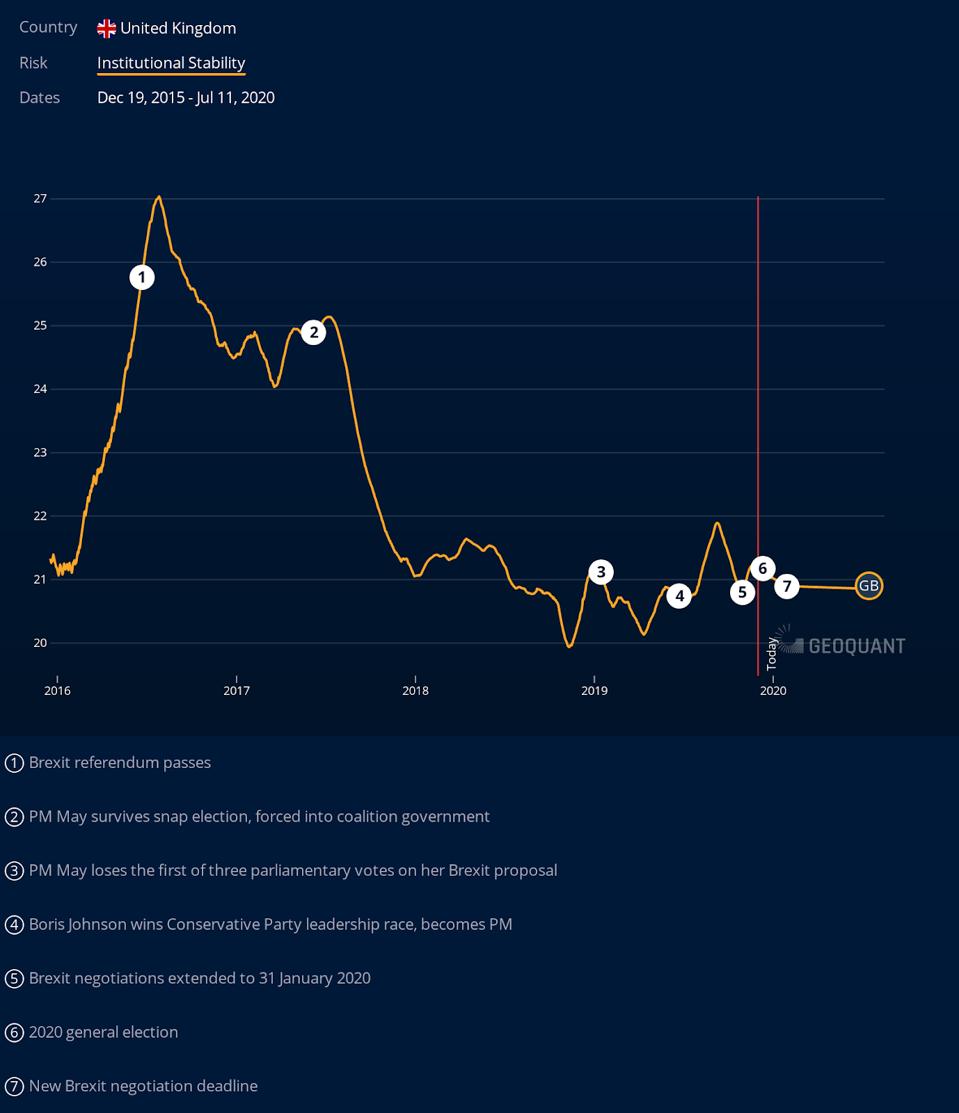 Despite the resignation of Iraqi PM Abdul-Mahdi, both Social and Government Instability Risk indicators for Iraq are forecast to rise through mid-December, indicating more unrest ahead. Per below, our models indicate that (i) the latest unrest and political volatility are part of a trend of increasing Social and Government Instability Risk since the end of the Iraq civil war in December 2017; and (ii) these risks are forecast to decline in early 2020, indicating that fears of a return to civil war or sustained civil unrest are likely overwrought. That said, given the immature state of Iraq’s political institutions and continuing violent protests over corruption and maladministration, there is unusually high uncertainty surrounding the path to (and identity of) a new Iraqi government, introducing major caveats to such projections.

Of course, two major (and generally conflictual) drivers of this uncertainty are the influence/intervention of Iran and the United States on Iraqi politics and it is no surprise that — per the figure below — Iraq’s “Contingent” Geopolitical Risk scores are currently highest for these two countries. Note in particular that the recent unrest comes amid a large jump in Iraq-Iran Contingent Geopolitical Risk since June/July 2019, which is consistent with the unprecedented popular anger directed at Iran during the protests. Importantly, this risk is projected to remain elevated into 2020, indicating that even if Iraqi politicians can cobble together a new government and reduce social unrest, Iranian influence will be a key risk factor. 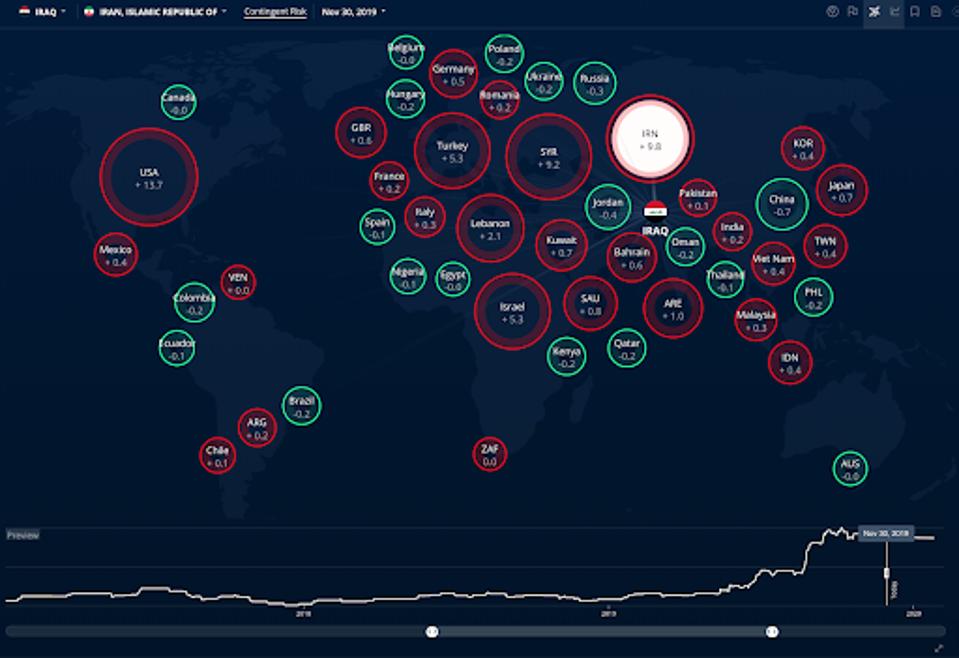 The long-running feud between PKR President/Prime Minister-hopeful Anwar Abrahim and PKR Deputy President/Economic Affairs Minister Azmin Ali has become increasingly public in recent months following Azmin’s controversial meeting with a group of UMNO MP’s and his rescinded invitation (attributed to Anwar) to open the PKR youth wing’s national convention. The risks to PKR and the broader PH coalition are material: the dispute has thus far contributed to the PKR’s failure to secure a federal senate seat due to a lack of support among Azmin’s camp for Anwar’s Melaka nominee, and another by-election loss to a BN candidate in Tanjung Piai. As visible in the figure below, our data suggests the PKR schism will continue to deepen in the coming months on the back of these events, with growing intra-party tensions and public dissatisfaction with the PH coalition’s performance since Mahathir assumed office jointly driving Government Risk — and two of its component indicators, Institutional Support and Mass Support Risk — to historic or near-historic highs; notably, we forecast the sharpest increase in risk will occur shortly after the PKR’s national congress this upcoming week. In the short-run, the chief risk from these dynamics is heightened uncertainty surrounding the timeframe for Mahathir’s transition out of office and the identity of his successor (a net benefit for Mahathir, who has remained cagey about his timeframe for leaving office) and a formal splitting of the PKR into separate Anwar/Azmi-led parties; in the long-run, the chief risk is an increased likelihood of a BN return to power. Though the latter possibility remains a ways off, we interpret the spike among all three indicators in the figure below as suggesting that a formal PKR split is increasingly likely to occur by mid-2020. 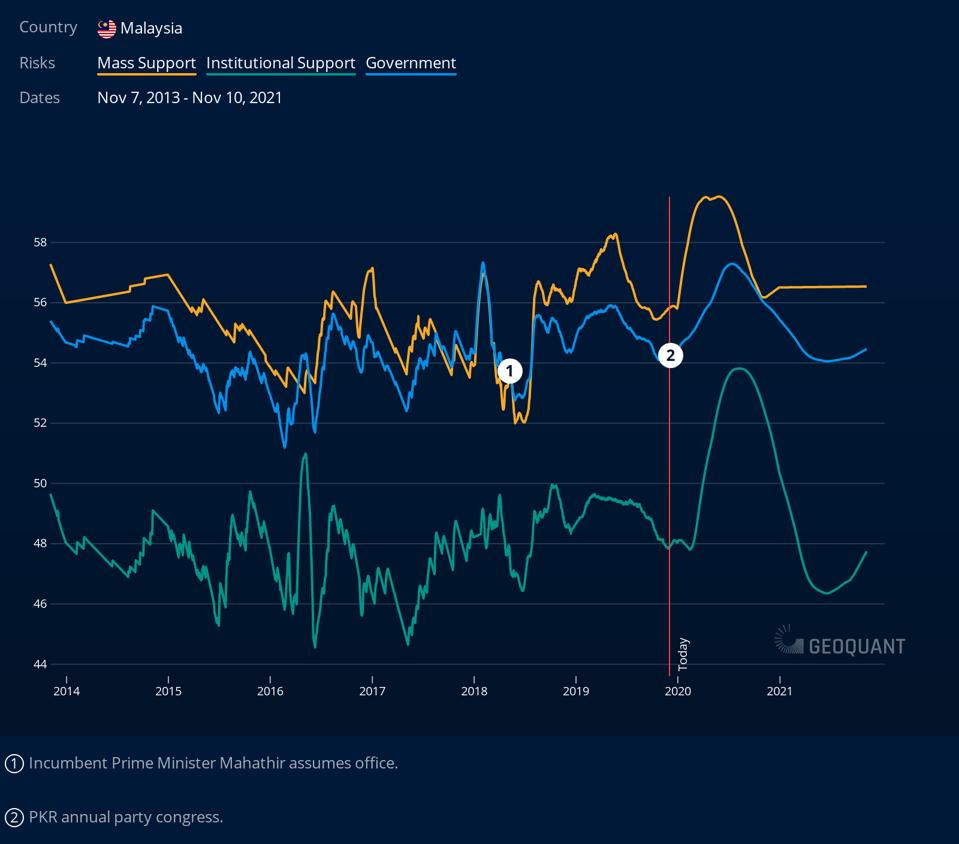 Mexico’s IPC has been highly inversely correlated with Regulatory Risk (r = -0.78) since early in the 2018 presidential election campaign, implying that higher risk is associated with lower equity values. AMLO won the race on 1 July 2018 and, early on, made enough positive pronouncements that markets rallied. But fears over AMLO’s policy agenda eventually increased Regulatory Risk and, together with a deepening trade conflict with the U.S., the IPC fell significantly before AMLO took office on 1 December. Since then, Regulatory Risk has remained elevated and despite being steady, has maintained it’s expected inverse correlation with the IPC. 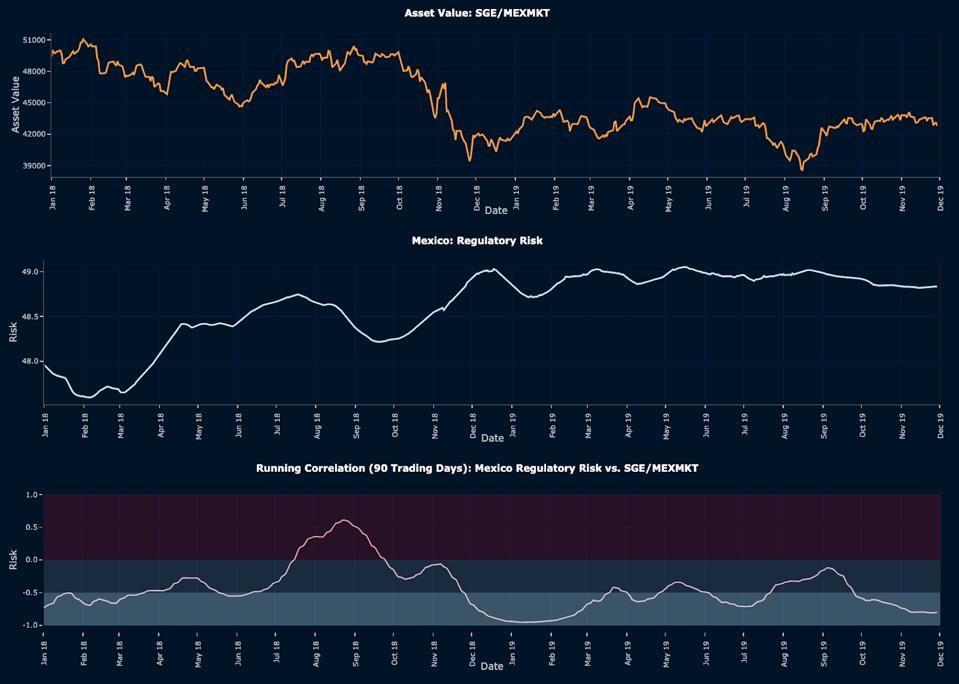 The Month Ahead: Political risk