Breaking
Everything You Need to Know About Corporate Social...
Is Adaptive Leadership the Key to Motivating Employees?
Why business events are set to return with...
Business events set to return with a bang!
Expanding Internationally: 5 Things to Consider for eCommerce...
How the Machine Shop Is Going Digital in...
Sustainable Food Packaging Is Helping the Hospitality Sector...
Top 5 Investment Practices To Make More Money...
Managing IT Requirements for SMEs: 5 Aspects that...
How To Build a Successful Luxury Brand In...
Finding The Best Google AdWords Consultant for Your...
8 Top Tips To Help Your Agricultural Business...
Three Reasons Why Office Décor and Design Are...
Looking To Improve Efficiency In Your Business? Here’s...
AI and machine learning for business
How Social Media Changed the World
Home Business Solar-Powered Electric Vehicle Charging Stations Are Just Around The Corner
Business

Solar-Powered Electric Vehicle Charging Stations Are Just Around The Corner 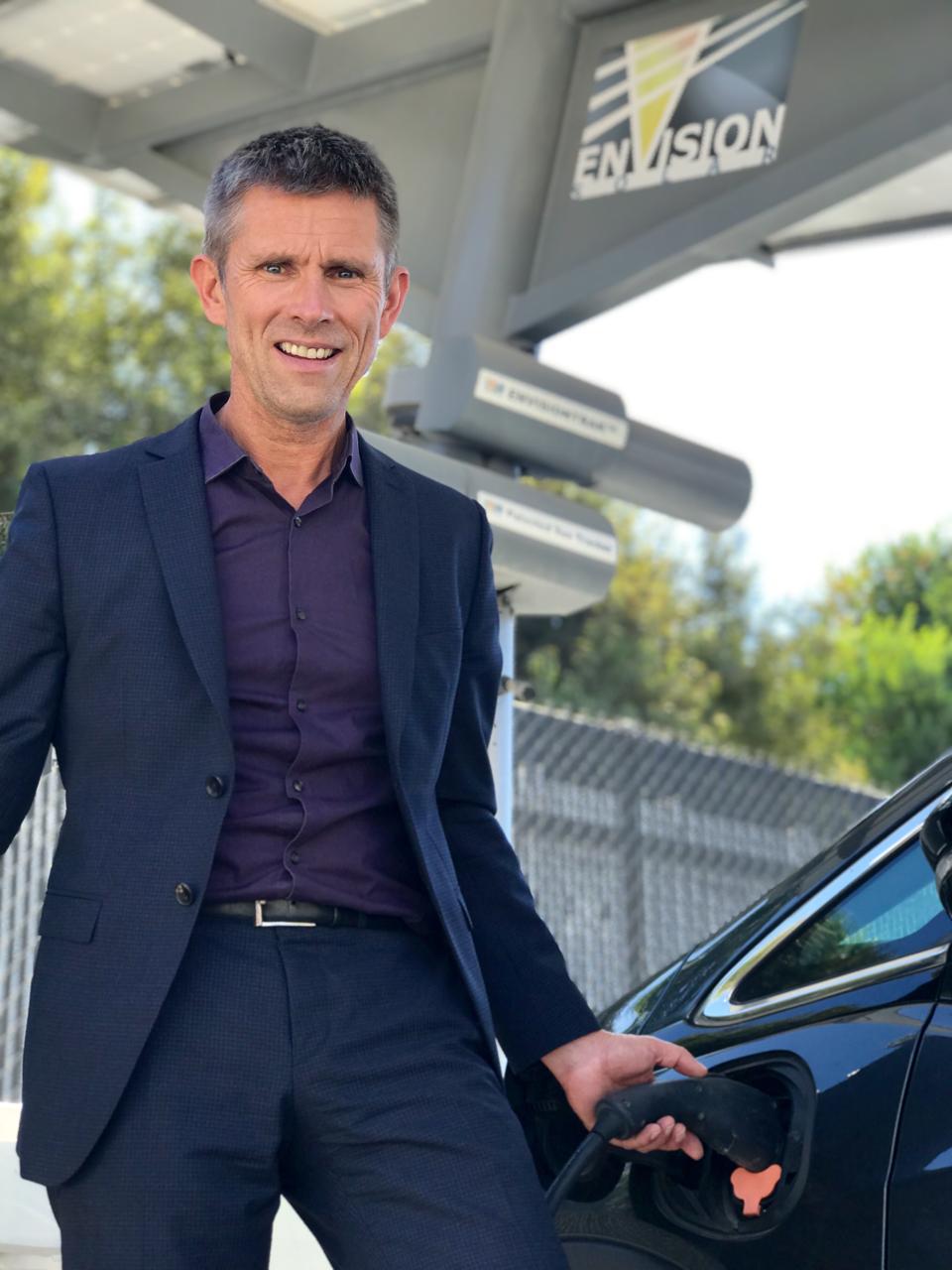 Desmond Wheatley charging car with EV ARC above him

On a sunny, 60 degree Friday afternoon in February, I strolled through the manufacturing facility of San Diego-based Envision Solar — a walk that transformed how I think about electric vehicles and especially how they are powered: the business makes solar-powered electric charging stations that are independent of the grid.

When EV owners juice up, they plug into an outlet at home or to a charging station that is wired to the grid — a power source that is dependent on how the local utility fuels its generators. But the origin of electrons produced by Envision Solar is coming solely from the sunshine, all collected by a solar array that rotates as the sun rises and sets. It then converts the sunlight into electricity before it is sent to an enclosure with computers and other electronics that either store the power in a battery or send it directly to the car.

“In our case, vehicles are driving on sunshine — no other source,” says Desmond Wheatley, chief executive of Envision Solar during our visit. “Our network is rapidly deployed because the businesses or government entities using it do not need to get any permits or incur any construction costs. It is scalable and can serve any fleet while the solar-powered vehicles create no emissions.”

The modern version of the enterprise got started in 2011 when Wheatley joined it and became its chief executive. In April 2019, the company got listed on the NASDAQ as EVSI — selling initially at $6 share and now at around $9.50, driven up by institutional investing and adding contracts. The business case?

Today there are 1.2 billion cars on the road — a number that will grow to 2 billion in 20 years. Only a fraction of those vehicles are EVs, although Wheatley expects that to escalate rapidly and especially as the cost of car batteries continues to drop; they are the most expensive part of the vehicle but already the price of such devices has fallen from $2,500 a kilowatt-hour to $400 — and on its way to $100. The internal combustion engine, by comparison, has largely reached maturity.

So, if this fundamental paradigm shift reaches fruition then millions of EVs will be demanding an expansive fueling infrastructure. By Wheatley’s estimate, “hundreds of millions” of EV-charging stations will be required. In California, the correlation is now about eight vehicles per each charging station. But a one-to-one ratio will ultimately be needed.

“When we look at the complications of grid-tied EV charging, there is too much time and money involved,” says Wheatley. “Beyond that, the grid has nowhere near enough capacity to meet its normal load and then supply millions of new electric cars. It would need 20% more capacity.” 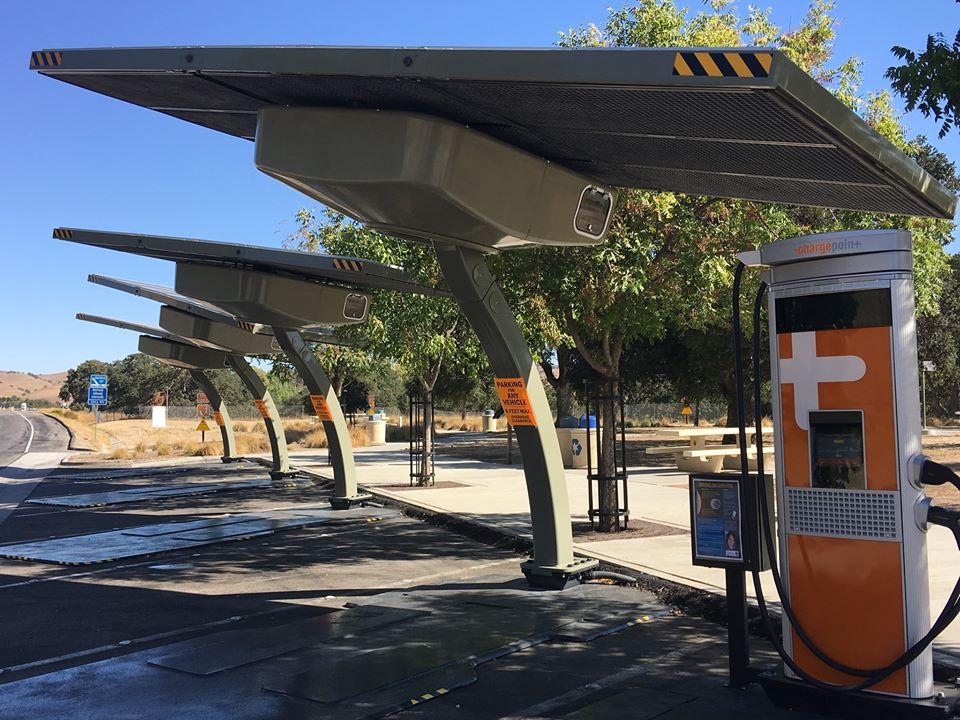 Think of Andrew Higgins, who invented the Higgins Boat that was used during the invasion of Normandy during World War 11: The idea was first shunned but was later adopted when the sea craft was shown to operate in shallow waters and capable of amphibious landings. Hundreds of boats were used to deploy thousands of men. To that end, the Higgins boat needed no ports or bridges.

Wheatley uses the same analogy concerning the installation of his solar-powered EV chargers: They can land at scale and they require no infrastructure. At the same time, each charging station is a parking spot. That is, a tractor drops off the completed charging port: the solar arrays are on top while the electronic equipment is just below. The car pulls onto the platform, plugging into the battery charger that is configured into the network.

More than 100 municipalities in the United States use what the company refers to as the EV-ARC. In all, two-thirds of its clients are government entities while the rest are businesses such as Google, Dell, General Motors, Kohls, McDonald’s, and Johnson & Johnson. What’s interesting is that the charging network is paid for by a sponsor — similar to the naming rights of a stadium. It’s about building brand recognition. In this example, consumers pay nothing to fill up.

Consider the case of New York City, which is Envision’s biggest client: The city has 36,000 vehicles in its fleet of which, 2,000 are electrified; the goal is to get to 100%, including garbage trucks and buses. The return on investment begins the day the network is delivered, says Wheatley. That’s because of the avoided construction costs. In New York City, it cost $2,000 per foot to dig a trench with the necessary cables before filling in the holes with asphalt. If it is a 100 foot trench, the cost is $200,000. Wheatley says the EV-ARC is $65,000, which also saves between $40,000 and $80,000 in electricity expenses over 20 years.

“Once they have decided to electrify, they must have the charging,” says Wheatley. “It is much cheaper than buying gasoline and doing maintenance.”

A Ray of Light 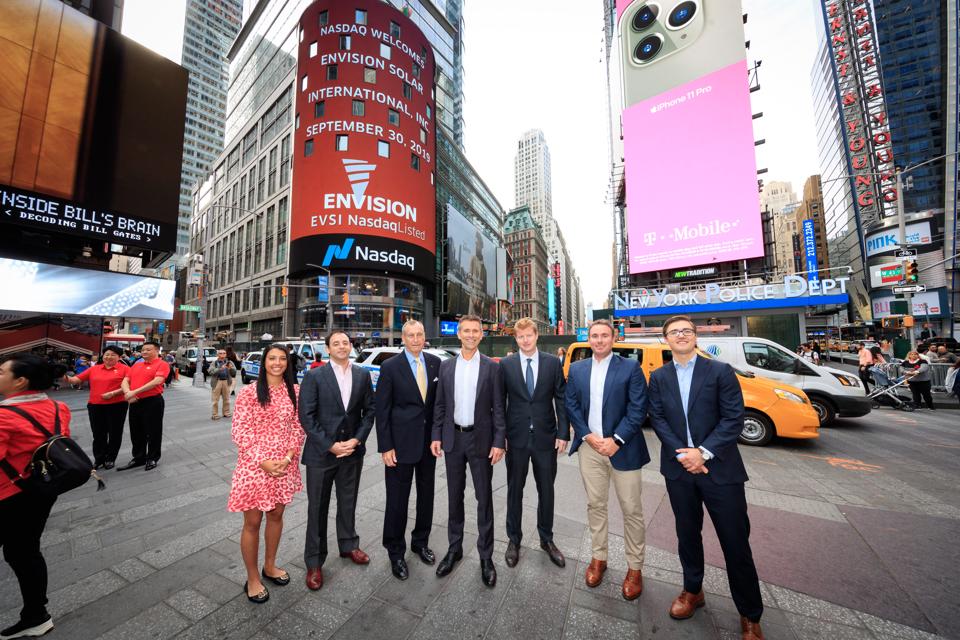 Anything that might blindside the company? Given the decline in battery prices, coupled with the low maintenance and fuel costs, Wheatley believes in the market fundamentals. Over a vehicle’s lifespan, he says the cost of ownership will be less than that of a car running on the internal combustion engine.

At the same time, the average American drives about 32 miles a day while most EVs have a range of 100 miles, with some able to go 250 miles per charge. Fast-charging stations can fill up the vehicle in less time than it takes to eat lunch, Wheatley says, enabling a car to go 200-plus miles per one-hour charge. And while today’s technology is “conductive” and requires owners to “plug-in,” tomorrow’s technology will be “inductive” and allow for wireless charging.

“Even today, EVs are competitive if you understand total cost,” he says. “Moreover, even the dirtiest coal-powered electricity is cleaner than gas or diesel. And more and more companies are producing renewable-energized EV charging stations or using renewable energy off the grid.”

What is needed is an expanded infrastructure. It is a matter of free-market economics and consumer demand: car companies do not like making different cars for different markets, preferring instead to use the same factories and robots to mass-produce the same vehicle models — whether they be in California or Kentucky.

To be economically viable, car manufacturers must produce for the global market. The European countries, for example, have vowed to go all-electric in the next 20 years. That will force even the most resistant consumers to ultimately get on board — made easier after they crunch the numbers and see the performance levels. Politicians wedded to the past can slow down progress. But they are powerless to stop free market forces.

“At some point, the mighty U.S. consumers get involved,” says Wheatley. “I do not care who is in office, no one will get in the way of what consumers want.”

Automotive companies are bringing increasing numbers of EVs on line, causing the charging infrastructure to expand. But that network has miles to go, requiring fast and scalable solutions that are also clean and affordable — a dynamic that means off-grid, solar-powered stations are just around the corner.