Breaking
ESBC Major Updates: Tons Of Heavyweight Greats Added...
5 On-Demand Courses To Help Develop Your Leadership...
How to Run Nonprofit Marketing Ads
Entrepreneurs Are Bringing Transparency To Home Buying And...
Best Incentive To Get Vaccinated: Money, Messaging, Or...
Page Level Query Analysis at Scale with Google...
How A CIO Can Align IT With Business...
Blogger of the Month: Jo, Girl Eats World
6 Things Women In Business Know That Men...
How to Use First-Party Data for Ad Personalization
Pressing Reset—Putting A Fallen Unicorn Back On Its...
How We Went Viral: Promoting Content with Influencers,...
Blame Olympic Record Price Tag For Return To...
Apple iOS 14.5 Release: Should You Upgrade?
How to Come up with Podcast Topics and...
Why Gaming Gear Company Razer Launched A $50...
Home Business Some Of Europe’s Financial Services Firms Are Gender Balancing – Others Sleep
Business 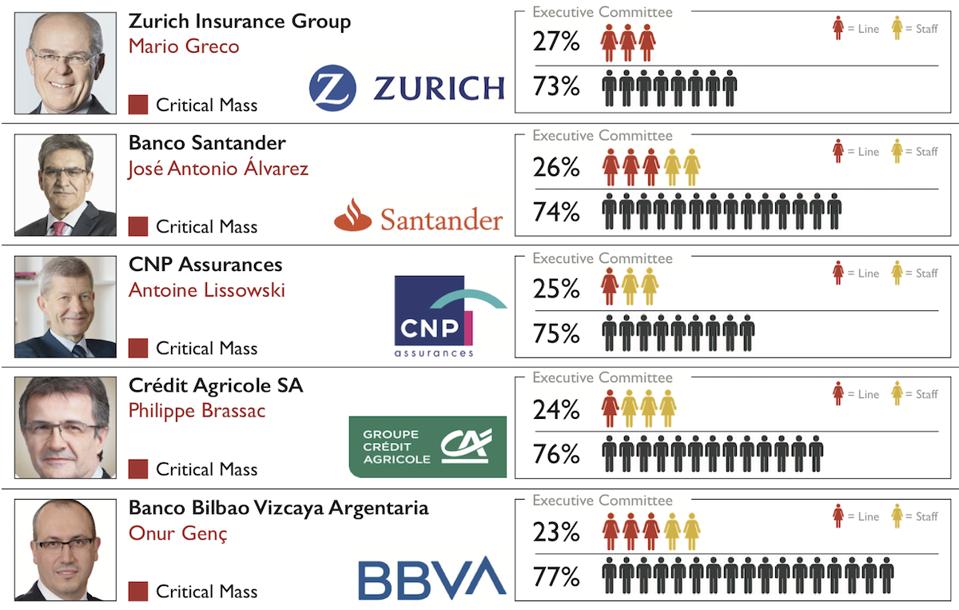 While the 4th edition of the Women in Finance Summit is being held in London Feb 12th, we thought it would be useful to share a measure of how Europe’s top companies are performing on a critical aspect of 21st century financial management: gender balance. 20-first’s new European Financial Services Gender Balance Scorecard measures the gender balance of the region’s Top 20 Executive Teams as well as the kinds of roles that women hold there.

“I have been following 20-first’s Gender Balanced Scorecards for a decade,” says Andrea Muller, former Executive Director-Global Head Institutional Business, Principal Global Investors. “While progress has been made and measured globally, the financial services sector can enable economic progress more rapidly by leading the drive to embrace gender-balanced businesses in the next decade. Goldman Sachs, where three of the nine members of the executive team are women, recently announced that it would not take companies public without at least one female board member. Critical Mass makes a difference!”

At the start of a new decade, men dominate 83% of the senior executive roles in Europe’s top 20 Financial Services firms while Credit Suisse reports that women hold 40% of global wealth (up to 45% in Europe). Financial Services remains a male-dominated sector that seems to be struggling to adapt to a more gender-balanced century.

There are 222 men and 47 women holding executive roles in these Top 20 companies’ Executive Teams. This is about the same as the gender balance of global firms’ leadership teams (see 2018 Global Gender Scorecard – Financial Services) which in turn represents a very modest shift from 2014, where men represented 87% of the ExCo seats of the world’s Top 20 financial services firms.

Some European companies have made progress. Almost half (40%) of the Top 20 have reached what we refer to as ‘Critical Mass,’ meaning they have 3 or more female executives sitting on their ExCos. Encouragingly, half of these women are in line roles, responsible for major business areas, rather than the staff and support roles we often find them in.

“I think it’s outstanding that this Scorecard drives home the distinction between line and staff roles,” says Vivienne Artz, Chief Privacy Officer of Refinitiv and President of the Women in Banking & Finance Association. “It’s absolutely critical. Companies can stuff their staff roles with ladies with massive management responsibilities, but it leaves them with lesser decision-making power and compensation.”

Zurich, Santander and CNP Assurances lead the group, with the most balanced teams in the Critical Mass phase – where men represent a maximum of 75% of executive team members. Zurich achieves a special mention for not only topping the list but also having all 3 of its female executives in line (rather than staff) roles. Interestingly, the top performers on gender balance are also reporting strong results and innovations in client connections.

Under Santander’s Chairperson Ana Botin’s leadership, the bank reported a 35% boost on Q4 earnings in 2019, along with a 9% increase in ‘loyal customers.’ Zurich recently reiterated its ambition “to be one of most responsible and impactful businesses in the world” under the leadership of CEO Mario Greco. As he describes the reason for their strong performance, he underlines that they have “deepened our customer focus and employee engagement by listening to their needs through regular tailored surveys. We have empowered employees to drive change and given our younger generation a stronger voice in shaping our culture and innovative programs such as our Zurich Innovation Championship for startups. Employee satisfaction has jumped over the past three years.”

“At HSBC, things are changing,” admits Rekha M Gomes, Chief Control Officer & Diversity & Inclusion Lead at HSBC. “There is no denial. It’s a well-recognised problem and we are focusing on internal targets and defining what levers we need to pull. The role of leaders is to appreciate the difference gender balance makes to the business. That drives the tone at the top.”

BRINGING UP THE REAR

German insurer Talanx is notable as the only company in the European Top 20 that has the dubious distinction of being alone with an all-male top team (6 out of 6). Nicht so gut!

The financial sector has a long way to go to fix its male-dominated leadership, culture and reputation. Many companies are adjusting to the increasing financial power and influence of women globally, but a majority of Europe’s top financial firms aren’t anywhere near balanced yet. Many of them are still caught in thinking balance is all about women. Leadership will be key in navigating this shift. It’s still visibly lacking.

The Smart Office Revolution Is Here, Because Smart Buildings Are Smart Business