Breaking
Mayo Clinic And Kaiser Permanente Invest $100 Million...
MozCon Virtual 2021 Interview Series: Wil Reynolds
Commodity Spikes May Be Close To Peaking, Futures...
Benefits of Responsive Web Design
ESBC Major Updates: Tons Of Heavyweight Greats Added...
5 On-Demand Courses To Help Develop Your Leadership...
How to Run Nonprofit Marketing Ads
Entrepreneurs Are Bringing Transparency To Home Buying And...
Best Incentive To Get Vaccinated: Money, Messaging, Or...
Page Level Query Analysis at Scale with Google...
How A CIO Can Align IT With Business...
Blogger of the Month: Jo, Girl Eats World
6 Things Women In Business Know That Men...
How to Use First-Party Data for Ad Personalization
Pressing Reset—Putting A Fallen Unicorn Back On Its...
How We Went Viral: Promoting Content with Influencers,...
Home Business Song Ji-Hyo Shares Thoughts On Why She Chose ‘Was It Love?’
Business

Song Ji-Hyo Shares Thoughts On Why She Chose ‘Was It Love?’ 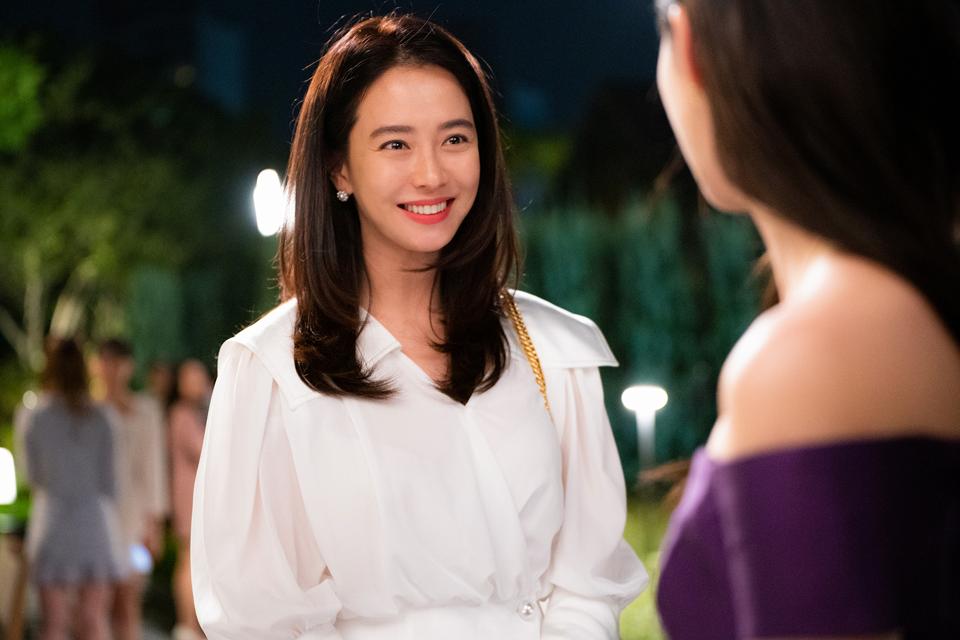 Song Ji-hyo plays a determined film producer in ‘Was It Love?’

Song Ji-hyo’s busy year has offered her more than one opportunity to reflect on the meaning of family. The Korean actress played a mysterious long-lost sister in the film Intruder and now plays a single mom struggling to raise her daughter in the TV drama Was it Love? She celebrated the tenth anniversary of the variety show Running Man, a show which she describes as being like family.

“This was such a meaningful and purposeful year for me in so many ways,” said Song. “It was a time of learning, growing and gaining insight.”

It was the love she felt for her own family that convinced her to play Noh Ae-jeong, the main character in Was It Love?

“I believe that aspect—love for family—is what I feel in common with the Ae-jeong character,” said Song. “Family is a top priority and a motivating factor in my life, and I too feel that I can go through pretty much anything for my family. I also think we share perspectives on the surrounding situations and people.”

That doesn’t mean the actress is exactly like her character.

‘If I were to look for a difference, it would be that I’m not so certain if I can be as gritty as Ae-jeong in doing things,” said Song. “While portraying her I felt empathetic, comforted and inspired by her energy.” 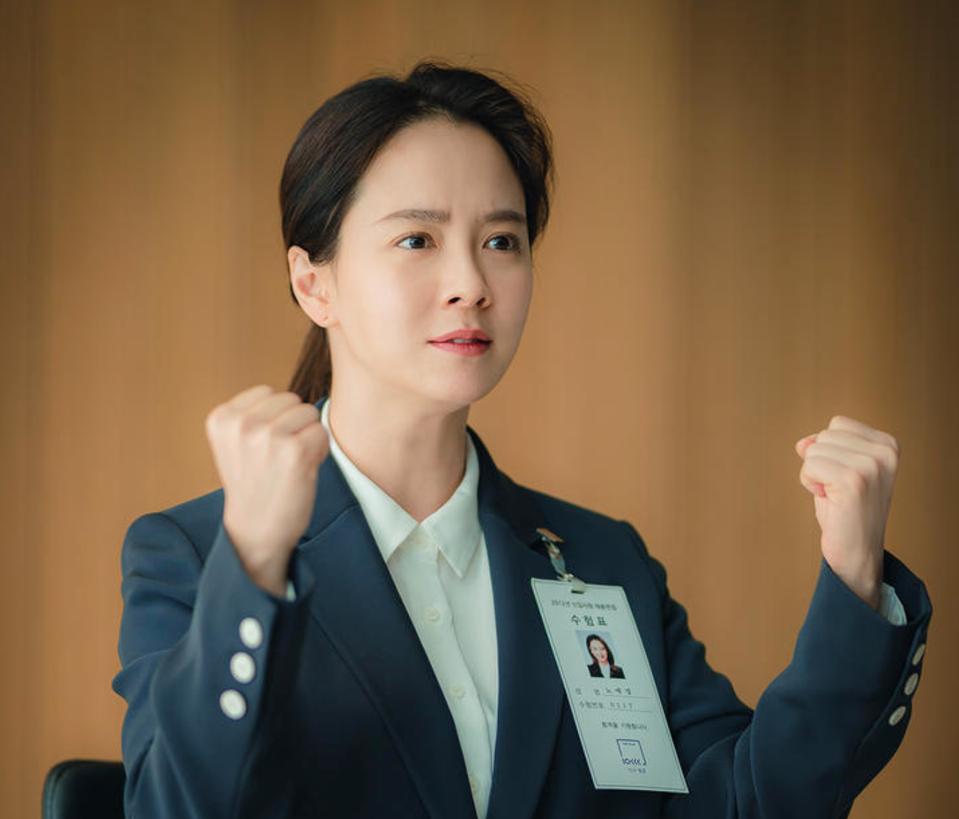 However, Was It Love? is about more than familial love. Ae-jeong finds herself in the position of being loved by four men, three of whom she has known for a long time. Not only that, but one of the characters wrote a popular novel about their relationship in college. Another one of those men liked her in college and is the actor cast in the film being made out of that novel, which she is producing. Yet another one of those men has always admired her and is now her daughter’s teacher, while the fourth is financing the film she is producing. It’s complicated, but that’s what makes it interesting.

“When I first read the synopsis for the romantic comedy Was It Love, the idea of characters who had known one another reuniting after fourteen years really appealed to me,” said Song. “The biggest draw was that this was so clearly different from anything else I’ve worked on. I also liked that my character Noh Ae-jeong was someone facing a tough reality, yet she hasn’t given up on her hopes and dreams of becoming a film director.  She’s a warm person who is devoted to her daughter and her family.

In most romantic k-dramas there is more than one suitor and the heroine must make a difficult decision. In Was It Love? Ah-jeong has four suitors, making it even harder to decide. Song won’t even hint at who Ae-jeong ultimately chooses. Again, it’s complicated.

“This show is one that has evolved one step further than other romance-themed shows, with a five-sided dimension,” said Song. “The characters in this show don’t suddenly appear to achieve chemistry conveniently, but they go way back and have a history, which they pick up from where they left off. During the fourteen years they were apart, each has changed his or her situation and place in life. Dae-o is Ae-jeong’s ex, who is now a contentious person in her life; Ryu Jin was a friendly class senior, but is now a colleague in her work; and Yeon-woo was a nice younger guy who is now Ha-nee’s teacher.” 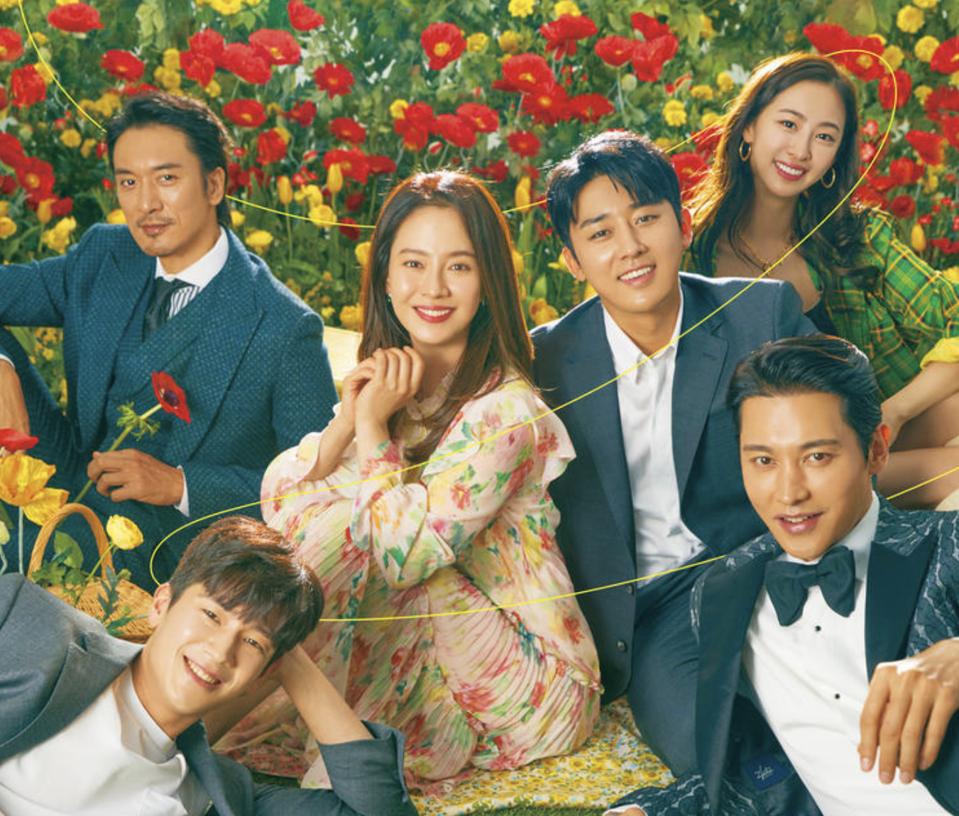 Four men find themselves in love with Song Ji-hyo’s character in ‘Was It Love?’

Everyone from her past has changed from who they were and where they stood.

“Pa-do, of course, is the only person she met recently, but their relationship will soon change. And A-rin, who is in a relationship triangle with Ae-jeong and Dae-o, is also from the past and has a personal story she wants to keep under wraps. I’d like to ask the viewers what choices they would make if they were Ae-jeong and to continue watching to see how these relationships develop.”

In real life, most women won’t simultaneously have four romantic candidates to choose from, but it’s scenarios like this that make acting fun for Song.

“As an actor, it’s exciting for me to be able to portray people and lives that I have not experienced in the past and are unlikely to experience in the future,” said Song. “In portraying Ae-jeong, it’s so fun for me to show the full extent of her charm and to be fully in the moment of her life events.”

Song made her big screen debut in the 2003 film Wishing Stairs and debuted on the small screen playing a ballet student in the 2006 romantic comedy Princess Hours. She appeared in the 2008 historical film A Frozen Flower, the 2013 film New World, and the 2014 rom-com k-drama Emergency Couple. Since 2010 she has been one of the regular cast members of the variety show Running Man.

“It’s very rewarding for me to know that there are viewers who laugh and cry with me, and that I can help someone be happy and entertained,” said Song. “Instead of having set goals as an actor, I want to be a blank sketchbook. I want to show myself not as myself, but as the self expressed through the work in whatever situation that is encountered.”

Song is known for her friendly rapport with other actors and her easy camaraderie with fellow cast mates on Running Man, so it’s surprising that she once considered herself introverted.

“In the acting profession, work is something you cannot do alone but together with others,” said Song. “I used to have introverted tendencies, but my acting career changed me so much. In the process, I learned the joys of sharing and working towards the same goal. Creating something together is immensely thrilling. So I hope to strive to do my best so that I can continue to work with those whom I care about and those who care about me.”

In An Era Of Contactless Payments, It’s Time To Get Real About Interchange