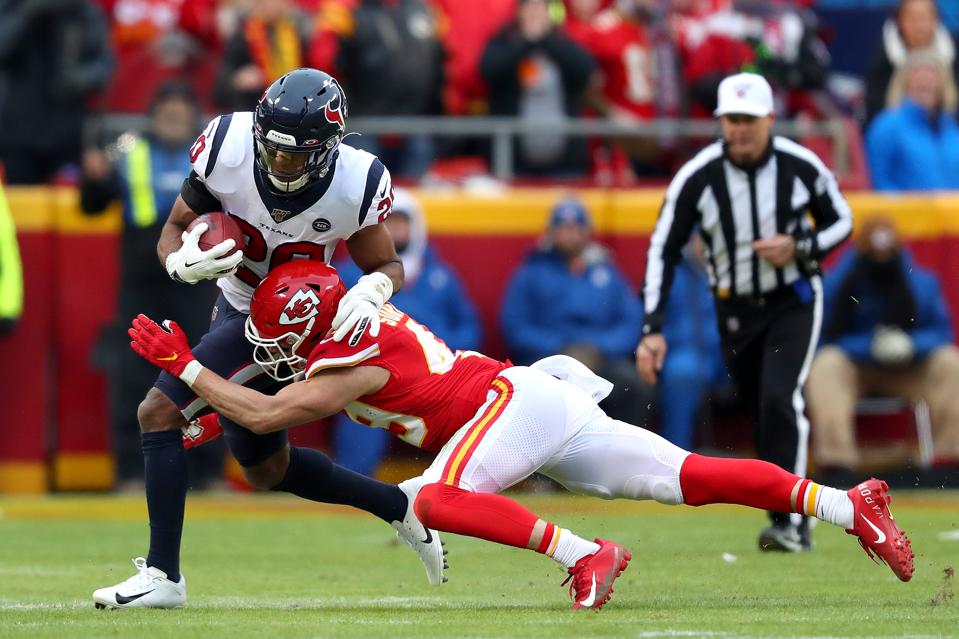 Justin Reid of the Houston Texans is tackled by Daniel Sorensen of the Kansas City Chiefs on a fake … [+] punt attempt during the AFC Divisional playoff game at Arrowhead Stadium on Jan. 12, 2020 in Kansas City, Mo. (Photo by Tom Pennington/Getty Images)

The offensive numbers from the Kansas City Chiefs’ 51-31 comeback win are prodigious. They scored 41 unanswered points and went on 51-7 run, and Patrick Mahomes threw for 321 yards, rushed for 53 more and threw five touchdowns.

But one seemingly smaller special teams play changed the Chiefs’ fate in their playoff win against the Houston Texans.

Facing a 4th and 4 from its own 31 with 8:32 left in the first half, Houston attempted a fake punt with a direct snap to Justin Reid. But Chiefs safety Daniel Sorensen stopped the opposing safety two yards short of the first down.

“I was proud of Sorensen,” Chiefs head coach Andy Reid said, “for stepping up and making the tackle on the fake.”

Sorensen, a fellow BYU product like Andy Reid, is a longtime favorite of his coach.

Using that good field position created by Sorensen, the Chiefs scored just four plays later on a five-yard pass to Travis Kelce to cut what had started out as a 24-0 lead to 24-14.

It’s not the first big play made by Sorensen this year. He also sealed the Chiefs’ 24-17 win in Mexico City with an interception of Los Angeles Chargers quarterback Philip Rivers.

Those kind of contributions are why the Chiefs have the 29-year-old Sorensen signed to a four-year, $16 million deal. Next season is his last under contract, and he becomes an unrestricted free agent in 2021.

With rookie Juan Thornhill out for the season with a torn ACL, Sorensen started against the Texans at free safety and tied for the team lead with eight tackles, but special teams remains his calling card.

“He’s one of our best special teams players — if not the best one,” Andy Reid said. “That’s how he kind of got into the league.”

On the fourth-down play Sorensen made, Texans head coach Bill O’Brien has been criticized for his decision to go for it, but Andy Reid defended the call.

“Bill did a nice job with that,” he said. “That was an opportune time to call that.”

Early on, it looked like it would be the Texans who rode their special teams to a victory. They blocked a punt for a touchdown to give them a 14-0 lead, and then Tyreek Hill muffed a punt, leading to a Deshaun Watson touchdown pass and a 21-0 lead with 1:24 left in the first quarter.

It was a shocking start for Chiefs special teams coordinator Dave Toub, one of the NFL’s best assistants.

“He could’ve easily gone in the tank on that, but he didn’t,” Andy Reid said. “He got his guys kind of rallied up.”

Pro Bowl rookie Mecole Hardman rallied the Chiefs with a 58-yard kickoff return, and then Mahomes needed just two plays to put the Chiefs on the board.

“Sorensen made a heck of a play, making a one-on-one tackle right there,” Mahomes said. “To make it a two-possession game at that point, we knew that we were kind of in range.”

The Chiefs were way behind much of the first half. In addition to the special teams gaffes, they dropped several passes and appeared to be tight.

Observers wondered if the Chiefs — now with an open road to the Super Bowl, following the Tennessee Titans’ upset of the Baltimore Ravens — were pressing. Andy Reid said they were just freak plays.

“It was just a matter of everybody kind of settling down and getting it right,” he said.

What ensued was a dizzying pace of scoring. With Mahomes facing the largest deficit of his career, the Chiefs scored seven straight touchdowns. For the second time this season, they scored 28 points in the second quarter.

“It was an amazing thing,” Mahomes said.

The win against the Texans assured the Chiefs of hosting the AFC Championship Game for a second straight year. Defeat the Titans, who have bested Andy Reid eight of the nine times they’ve faced him, and the Chiefs — as the AFC’s representative in Super Bowl LIV — will hoist the trophy named after their founder.

How A Hijab Wearing Extra Made ‘Spider-Man: Homecoming’ A Triumph Of Representation

The Supreme Court Upheld DACA But The Trump...