Breaking
Three Essential Components of a Successful Small Business
Pandemic Pet Adoptions Add To Chewy’s Tailwinds, But...
How to Use LinkedIn’s Social Selling Index Like...
Strong Revenue Trend Could Drive EXACT Sciences Corporation...
9 Things To Know Before Starting A Business
‘Game & Watch: The Legend Of Zelda’ Will...
The 9 Fundamental Components Of A Startup Pitch...
How to Get Results from Broken Link Building
Florida Supreme Court Tells The American Bar Association...
How to Write Perfect Paid Social Media Marketing...
How Restaurants Can Design a More Sustainable Food...
Expenses That Small Business Owners Need to Be...
How You Can Make Saying Goodbye To The...
Biden To Meet Royal Family At Cornwall’s Eden...
It’s Going To Be Emotional — Going International...
Peer Mentoring For Students: STEM & Buds
Home Business ‘South Park’ Review: ‘Turd Burglars’ Goes Back To Basics
Business 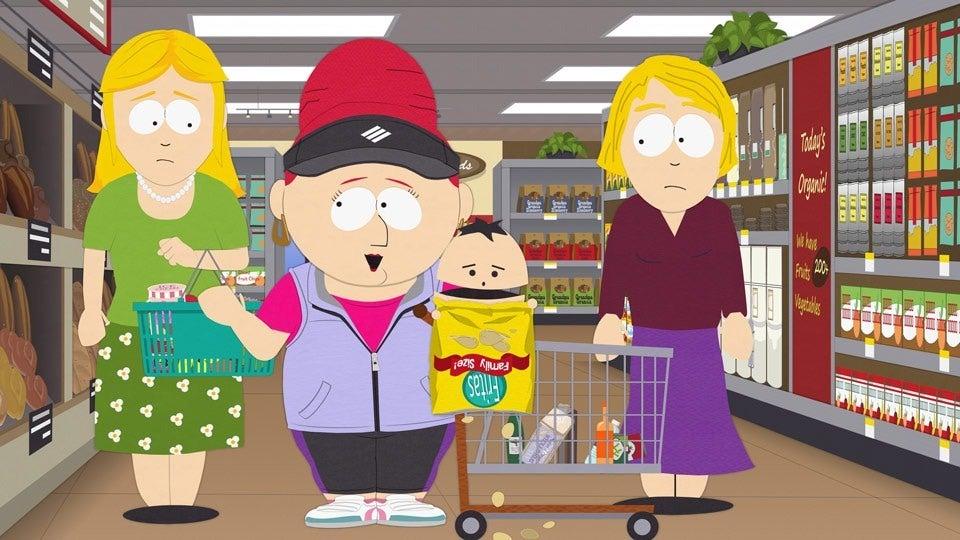 Sheila, entranced by the magic of fecal transplants.

This week’s episode of South Park, “Turd Burglars,” returns to the classic format of four boys going on a ridiculous adventure inspired by weird societal trends, and was the funniest episode of the show I’ve seen in a long time.

Kyle’s mom is in the middle of one of her trademark rants, this time demanding gender equality, which the show promptly grants her, cursing her with a bout of repulsive toilet humor normally reserved for male protagonists.

Turns out, Sheila is deathly ill and in dire need of a “fecal transplant,” which is a real and effective treatment that sounds as though it was conceived by Trey Parker and Matt Stone. As Sheila is gifted with the remains of a stranger’s digestive tract, the implanted poop works wonders for her health, restoring her vitality in a way that attracts the envy of her friends.

As Kyle watches an explanation video given to him by the doctor, he is horrified to discover that our bodies are absolutely teeming with microbiological life, and to be fair, it’s kind of unpleasant to think about. Kyle starts to turn into a bit of a germaphobe, obsessing over the microbes that cover every surface of the world.

Suddenly, the boys are approached by one of Sheila’s friends, seeking a piece of her magical, restorative poop, which Sheila is selfishly keeping all to herself, literally flushing the valuable substance down the toilet. With a copy of Jedi: Fallen Order as their reward, the boys are tasked with retrieving a piece of fecal matter, a gruesome errand that Kyle (understandably) doesn’t want anything to do with.

Of course, Cartman, Stan and Kenny will do anything to get their hands on the new Star Wars game (was this a bizarre in-episode ad?), and promptly form a plan to set up a bucket in Kyle’s basement, to catch a poo, or two.

Hilariously, Kyle catches them in the act, and opens up to his doctor regarding his discomfort with the radical new health treatment. Pondering the potential of fecal transplants, Kyle wonders if Tom Brady’s poop might provide a restorative cure-all, which sparks a tribute to David Lynch’s Dune, Brady’s poop apparently being the most desired substance on the face of the Earth – the “Spice Melange.”

Meanwhile, Sheila’s friends have succumbed to her deadly vomit-diarrhea infection, and are contaminating the entire town with their gruesome bodily sprays. Turns out, administering fecal transplants at home, through an old turkey baster, wasn’t a great idea

With the boys having successfully pulled off their poop heist, Mr. Mackey approaches them for an even bigger job – acquiring the legendary “Spice Melange” from Tom Brady.

The boys accept, using Kenny as bait, dressing him up as a dying child with a last wish to visit the famous athlete (amusingly, Kenny doesn’t actually die – seems like that period of his life is over). As the boys enter Brady’s house, they realize that they aren’t the only ones seeking Brady’s sacred fecal matter, and Tom Brady realizes it too.

Despairingly yelling at his intrusive guests to simply improve their diets instead of trying to steal his poop, Brady is about to throw them all out, until Kyle walks in, gifted with “blue-in-blue” eyes and the ability to see the swarming microbes that taint every surface.

Kyle exposes Brady’s secret stash of turds, an odd collection which the poor man keeps attempting to explain, but nobody cares; they’re all entranced by the Fountain of Youth of fecal matter floating before them. It must be said, South Park might be famous for its rough animation style, but they always take the time to render feces realistically, with a loving attention to detail.

Thus, the town’s disease outbreak is saved by the “Spice Melange,” and Kyle has gained spiritual insight on the nature of reality, and the miniature worlds inside us, teeming with sacred life, and precious poop particles.

This was a hilarious episode that managed to stretch out a simple poop joke for twenty minutes; South Park still excels at sheer stupidity and crude humor, and the new format of exploring the stories of side characters resulted in an old-school adventure, complete with one of Kyle’s moralistic speeches to finish the episode off.

If you enjoyed reading, check out my other ‘South Park’ season 23 reviews:

Shopping Black Friday Deals? This Is The Audio Gear To Watch For