Breaking
Mayo Clinic And Kaiser Permanente Invest $100 Million...
MozCon Virtual 2021 Interview Series: Wil Reynolds
Commodity Spikes May Be Close To Peaking, Futures...
Benefits of Responsive Web Design
ESBC Major Updates: Tons Of Heavyweight Greats Added...
5 On-Demand Courses To Help Develop Your Leadership...
How to Run Nonprofit Marketing Ads
Entrepreneurs Are Bringing Transparency To Home Buying And...
Best Incentive To Get Vaccinated: Money, Messaging, Or...
Page Level Query Analysis at Scale with Google...
How A CIO Can Align IT With Business...
Blogger of the Month: Jo, Girl Eats World
6 Things Women In Business Know That Men...
How to Use First-Party Data for Ad Personalization
Pressing Reset—Putting A Fallen Unicorn Back On Its...
How We Went Viral: Promoting Content with Influencers,...
Home Technology Space: The Final Frontier…Of Telemedicine?
Technology 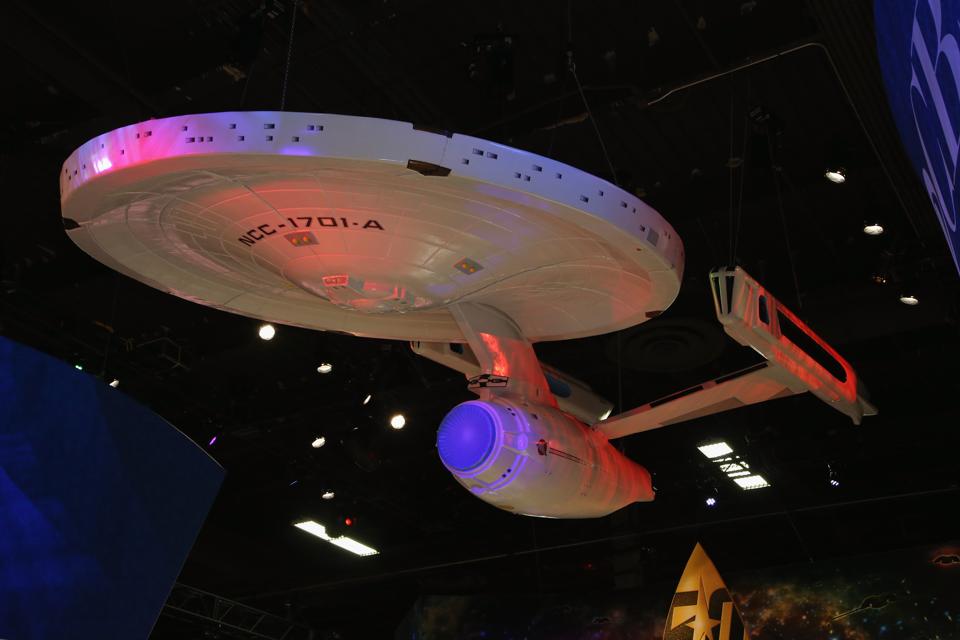 A model of the USS Enterprise from the ‘Star Trek’ movie franchise. (Photo by Gabe Ginsberg/Getty … [+] Images)

No, it wasn’t a trip to the USS Enterprise, either in the current Star Trek movie series or back to the famed TV series in the 1960’s and ‘70’s. If only. But this adventure in space medicine was a close second. Two months into a six month stint on the International Space Station (ISS), one of the astronauts developed a blood clot in one of the large veins in the neck. This was found as part of a research study they were engaged in, whereby ultrasounds of their neck veins were being performed during the trip—not to look for blood clots, but to look at other issues related to space travel and bodily fluid function. A large clot was found in the large vein that drains the blood in the head and neck (internal jugular vein), even though the astronaut (who remains anonymous) was not having any symptoms.

NASA contacted Dr. Stephan Moll, a Professor of Medicine and Hematologist-Oncologist at the University of North Carolina, who has specialized expertise in thrombosis (blood clots) and use of various anticoagulants, or blood thinners. While Dr. Moll, who is also the founder of the Clot Connect outreach project, did not get the opportunity to make the trip to the space station, he did provide the longest distance telemedicine consultation to date, helping make the decision on how to treat the blood clot.

The type of blood clot, known as a DVT, or deep vein thrombosis, is typically seen in the setting of long airplane flights (over four hours), after long periods of being sedentary, including car trips, being bedridden, or even during or right after undergoing a long surgery. For many of these instances, there are measures to take to prevent these. For travel, it is recommended to move your legs often and exercise calf muscles either while seated in a car or plane, or by taking car trip breaks or getting up to walk when it’s safe on a flight. Individuals who are at higher risk to have clots, such as those with obesity, recent surgery, an immobilized limb, during and soon after pregnancy, or those taking estrogen therapy, are often instructed by their physicians to be more proactive in moving as often as possible. During and after many surgical procedures, intermittent pneumatic compression devices are used to help prevent DVT’s by squeezing the legs periodically, increasing the blood flow and lowering the risk of clots. Alternatively, some patients are treated with blood thinners such as aspirin to minimize the risk of clots around the time of surgery. 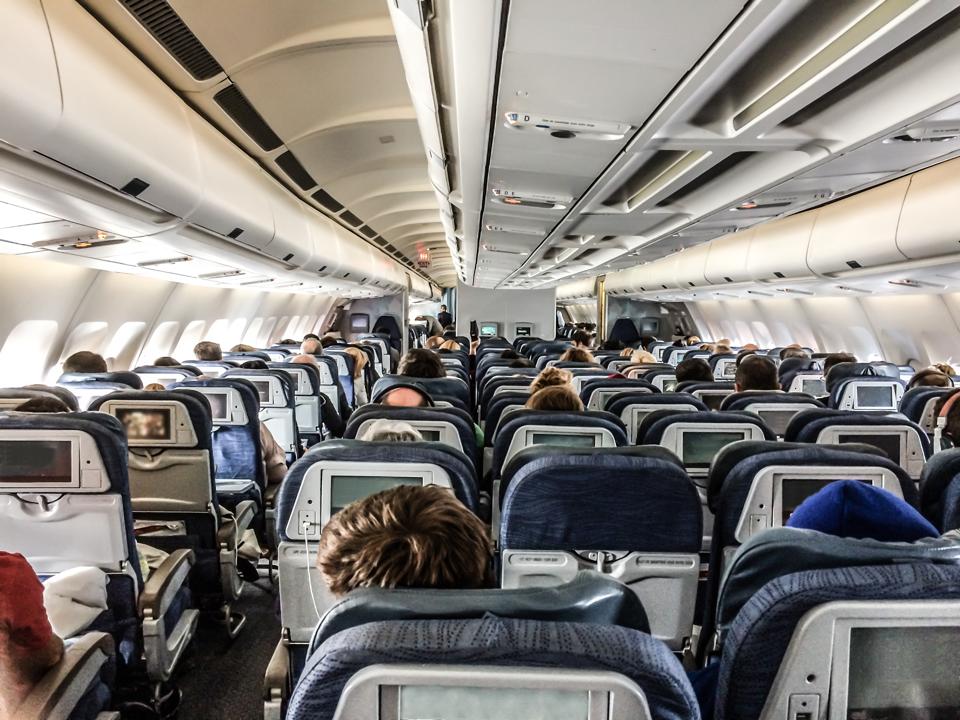 Passengers in a plane seen from behind, above seats

Blood clots such as DVT’s are typically associated with symptoms such as pain in the area, swelling of the limb involved, and redness and warmth of the skin overlying the clot. Travel-related clots and clots due to being sedentary (for instance, during or after a surgery) tend to be more commonly in the large veins of the legs. Clots in the large veins of the neck are more commonly seen after neck surgery, or after placement of a catheter in the neck during or after a medical illness. However, according to Dr. Moll, space travel may have an impact on increasing risks of a DVT in the neck: ‘The risk may be increased… due to flow abnormalities while being in low/zero gravity during space travel compared to being sedentary on earth or commercial air travel.” However, Dr. Moll adds that this is indeed speculative at this point, with further data needed in the future. Studies with NASA can hopefully help answer some of these clinical questions.

There are significant dangers related to these deep venous clots: they can spread, or break off to reach the large veins of the lungs, forming what’s called a PE, or pulmonary embolism, which is an emergency medical situation, associated with symptoms such as trouble breathing, fast heart rate, and light-headedness. Without immediate treatment, PE’s can be deadly. 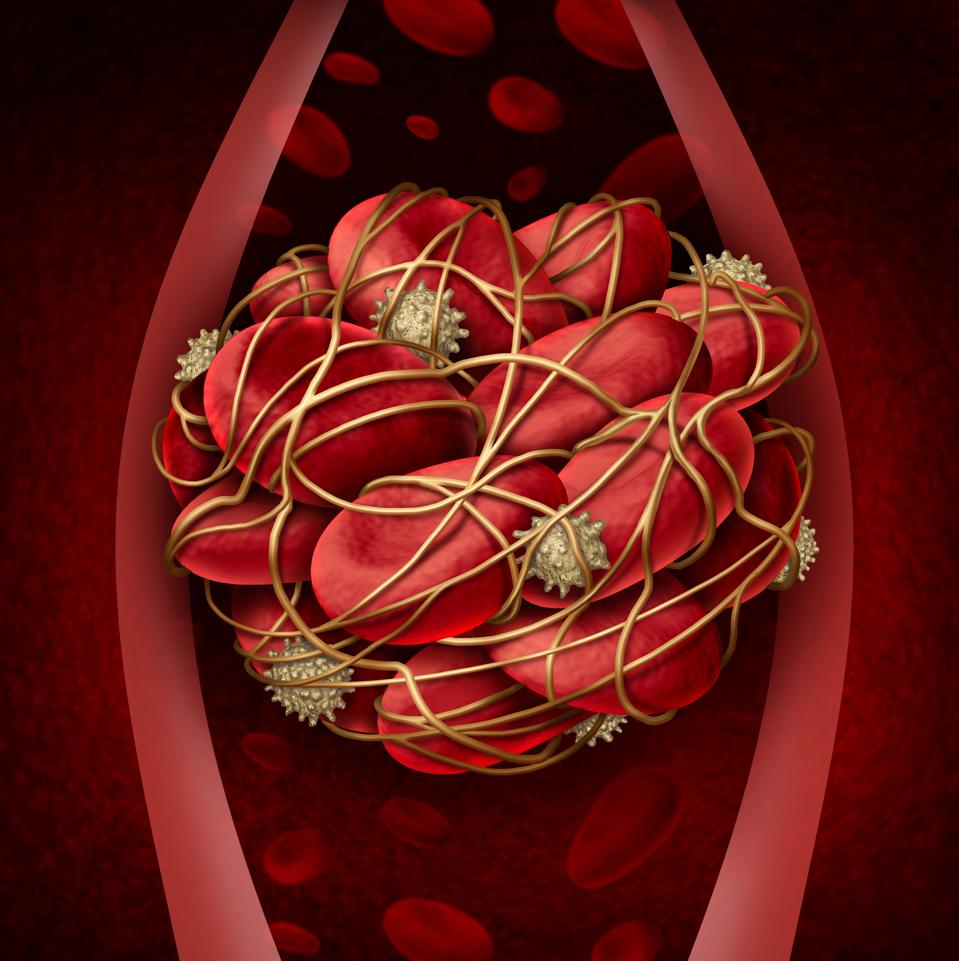 Blood clot and thrombosis medical illustration concept as a group of human blood cells clumped … [+] together by sticky platelets and fibrin creating a blockage in an artery or vein as a health disorder symbol for circulatory system danger.

Treatment for blood clots typically includes blood thinners, but rarely surgery or placement of a special filter to prevent future clots may also be indicated. But while various types of blood thinners are used routinely, either to prevent or treat several types of clotting issues, these medications are not without risk. Patients who take any type of blood thinners (even daily baby aspirin) are at risk for bleeding anywhere in the body, even from a minor fall or injury.

Dr. Moll had a tough decision to make: the ISS was equipped with one type of blood thinner (enoxaparin, to be given as an injection), but there was only a 40-day supply. The astronaut had a rare type of DVT, as it was in the neck, not in the leg, and was without any symptoms. Dr. Moll weighed the risks of leaving a large clot untreated, and decided it would be best to initiate treatment. A similar anticoagulation medication was shipped to the ISS in the interim (apixaban), so that the astronaut would be able to continue therapy once the 40-day supply was completed. But the risks of trauma to the body on re-entry to earth were high; thus Dr. Moll and colleagues decided that the astronaut should stop taking any blood thinner four days before re-entry to earth. All went smoothly, and the clot did not require any further therapy after the astronaut returned safely to earth. 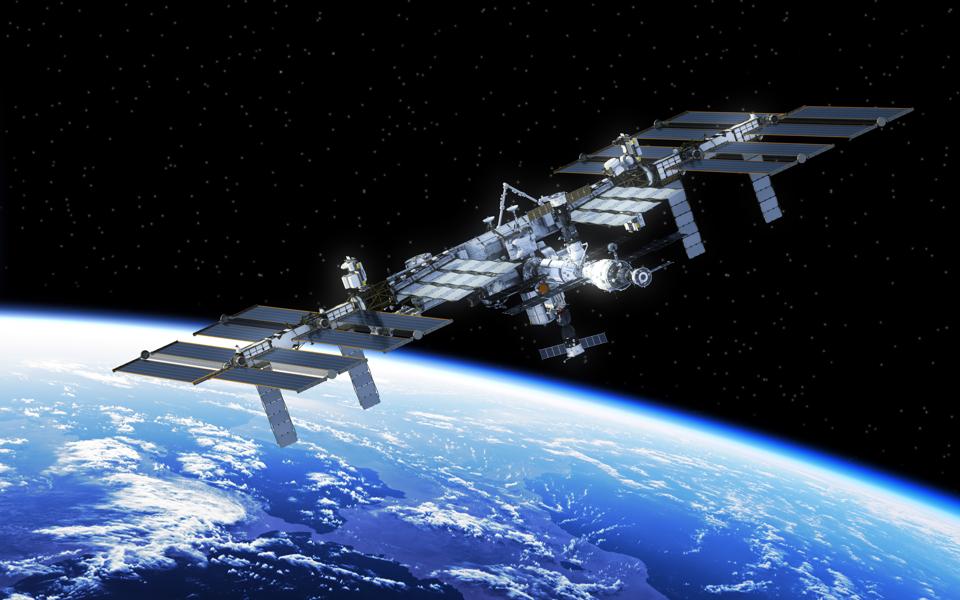 But the events that occurred were unprecedented. Little is known about DVT risk in space, nor is it known what put this particular astronaut at risk to develop a DVT in a large vein in the neck, as opposed to the leg. And given that this clot was without symptoms, had the ultrasound study not been taking place, it’s possible that this “silent” clot could have dislodged, leading to a pulmonary embolism. The question remains, what to do in the future? Was this a purely random event, or are astronauts indeed at risk for developing both indolent and symptomatic blood clots? Dr. Moll notes that further work with NASA will likely take place, with goals towards answering these and many other questions regarding screening for clots, monitoring for clots, and treating them both before, during and after long space missions. As such an entity was found fortuitously, assiduous research will be needed to better identify specific risk factors for clots as well as other medical conditions seen in the space stations as well as other forms of travel in the future. 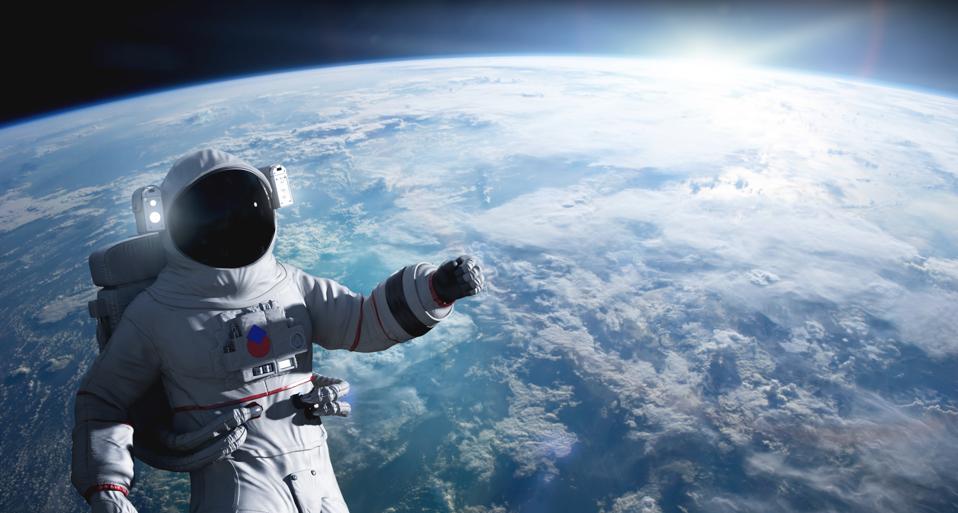 Astronaut conducting spacewalk on Earth orbit. 3D Illustration. Some elements of this image … [+] furnished by NASA

New Brand Targets US With Innovative OLED And 8K TVs