Breaking
Zooming In – Should SMEs Invest In The...
iOS 14: The Surprising Security Risk Of Sharing...
How A Break From Lord Sugar Changed The...
Sunday’s Google Doodle Is Actually About Google
Office Of The Comptroller Of The Currency Chief...
Source Code For Multiple Windows Operating Systems Publicly...
Why Forgettable Pfizer Really Is A Great Value...
Hot For The Holidays? Amazon Home Drone, Kid...
Best Small Business Loans
The FAAMG Stocks Drive The Markets
Channel Arbitrage And Other Ways Fintech Is Disrupting...
Mall Of America Extends A Hand Of Unity...
Surprise Samsung Galaxy S20 FE Beats Google Pixel...
After Apple And Tesla, Berkshire And Amazon Should...
Is It Wrong To Be Rich In Poor...
‘C&C’ Is 25: How ‘Command & Conquer’ Revolutionized...
Home Technology SpaceX Is Making It Harder To Take Photos Of The Stars. This Is How And To Do It While You Still Can
Technology

SpaceX Is Making It Harder To Take Photos Of The Stars. This Is How And To Do It While You Still Can 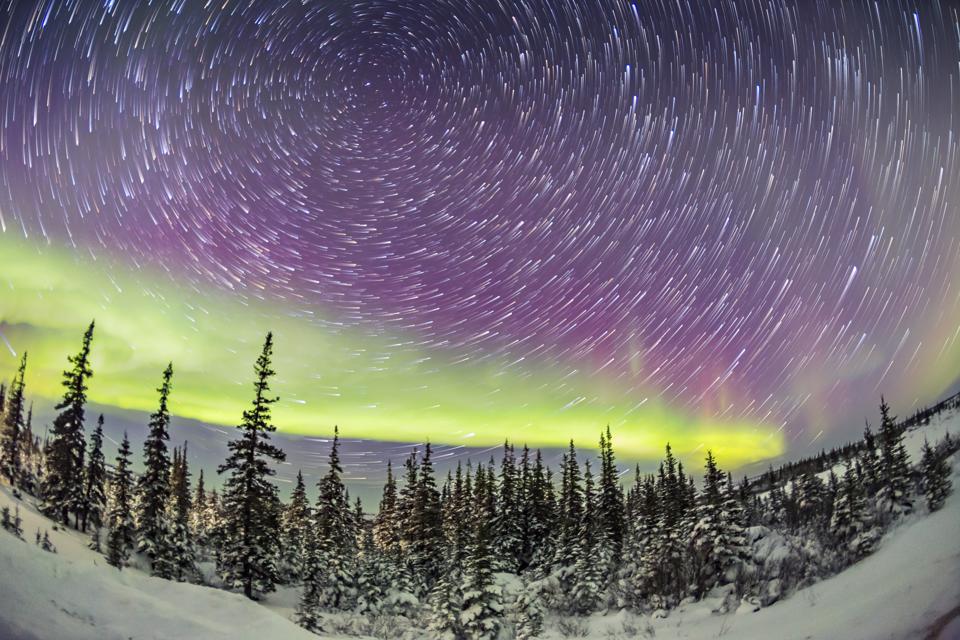 Will SpaceX and the other mega-constellations make life harder for astrophotographers?

Earlier this week, SpaceX successfully launched its fourth Starlink mission, putting 60 more high-speed internet satellites into space to bring the total in orbit to 240 as its mega constellation takes shape.

If it all goes as planned, SpaceX will launch 1,500 more satellites in 2020, and Starlink will eventually number at least 12,000. Trouble is, astronomers and astrophotographers are in crisis over Starlink because they are proving to be significantly brighter than other satellites. SpaceX has been looking in to producing satellites with a dark coating, but none were launched in the most recent batch. Worse still for night sky-lovers, Amazon, OneWeb and others are planning similarly dense mega-constellations.

So is this the end for astrophotography?

“A few satellite trails in images are to be expected and can be cloned out if needed, but not dozens or hundreds,” says Alan Dyer, a professional astrophotographer and author at Amazing Sky from Strathmore in Alberta, Canada and member of The World At Night (TWAN). “SpaceX seems to be forging ahead with its launches despite the environmental impact of their satellites,” he says. Dyer describes the satellites’ brightness as “surprising and disconcerting” and of “huge concern”. “One man’s ambition is changing the night sky for the worse,” he adds, referring to SpaceX CEO Elon Musk. 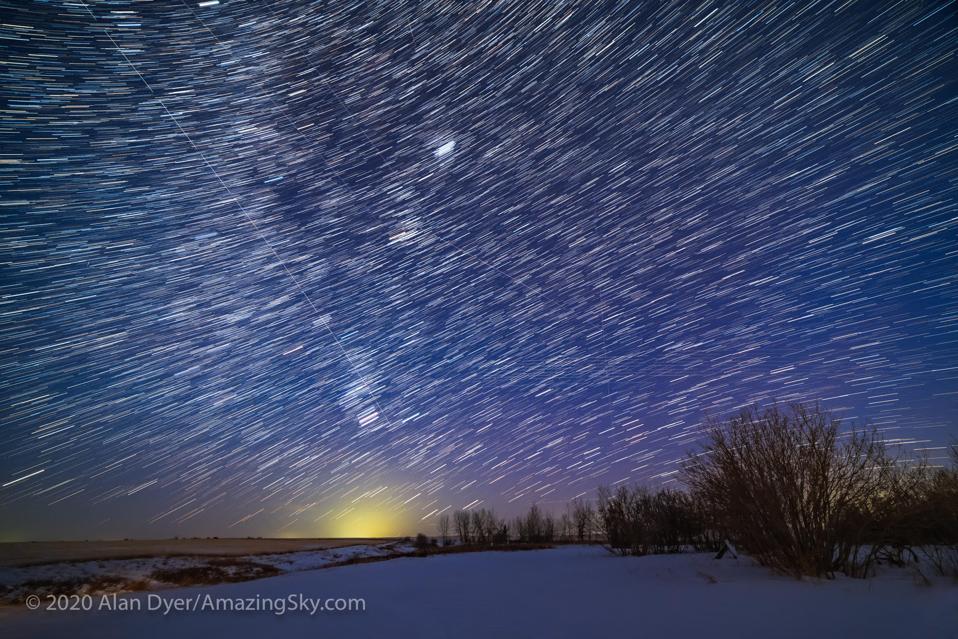 An example of a star trail stack photobombed by SpaceX Starlink satellites, visible as the parallel … [+] tracks at lower right (other satellites contribute the vertical trails). Photo by Alan Dyer www.amazingsky.com

How to avoid SpaceX Starlink satellites

However, there is a glimmer of hope for astrophotographers because SpaceX’s satellites, like all orbiting hardware, is particularly reflective only at certain times. “They will show up only in shots taken early in the evening or before dawn, when they are reflecting sunlight,” Dyer, “but that can still be when we might be shooting, to record some of the sky colours.”

Astrophotographers, it seems, may now have to do their work in the dead of night. 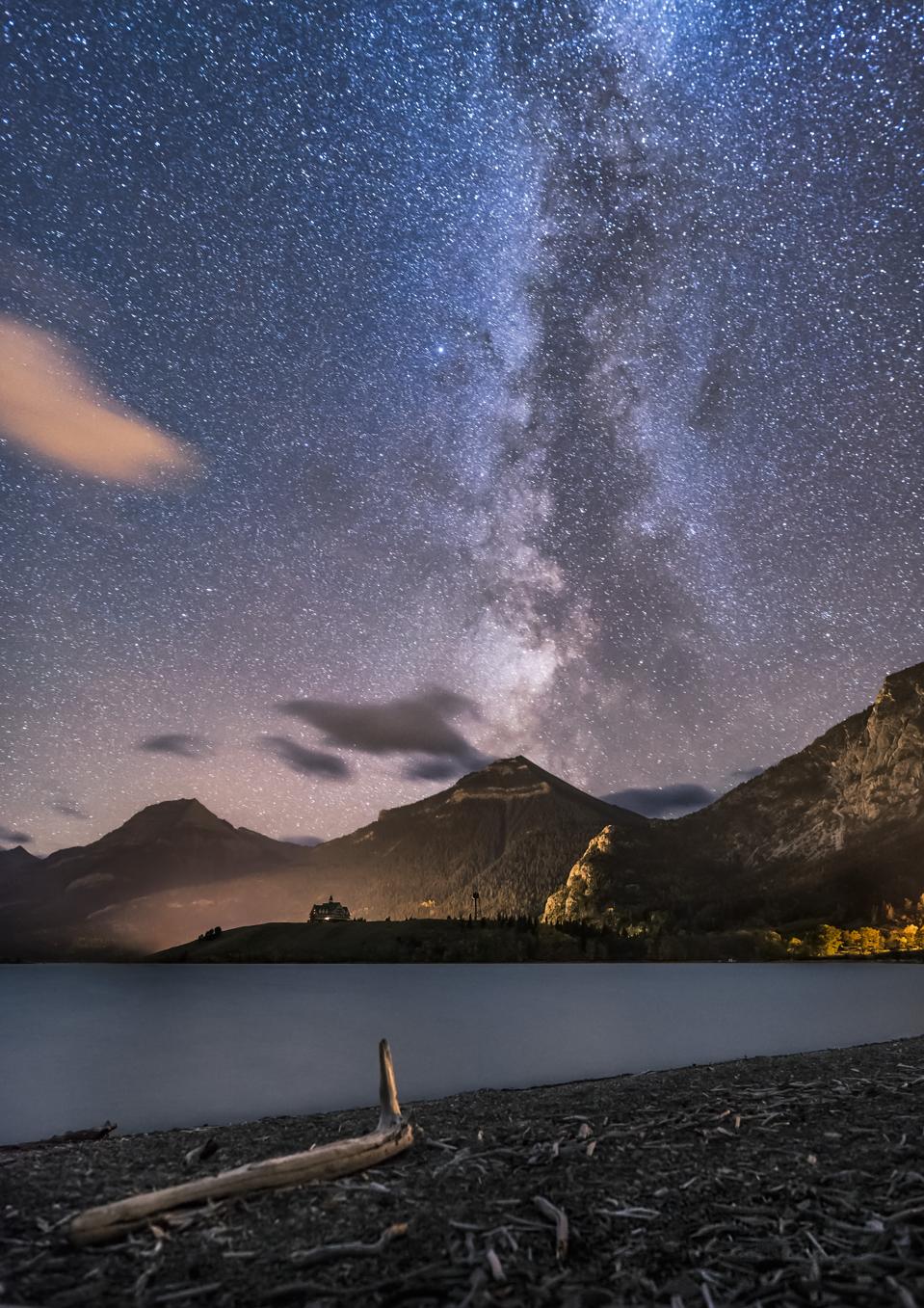 The Milky Way over the distant Prince of Wales Hotel from Driftwood Beach, in Waterton Lakes … [+] National Park, September 24, 2016. Being at the end of the season, the hotel is closed and dark. The bright star at centre is Altair in Aquila. (Photo by: Alan Dyer /VW PICS/Universal Images Group via Getty Images)

How to takes night-scape photos of the sky

Astonishing images of the night sky now fill the internet, but it’s not a difficult thing to do. With an entry-level DSLR or mirrorless camera—and even with a compact camera if it has a full manual mode—you can take incredible images on any clear night.

Here’s the equipment you need: 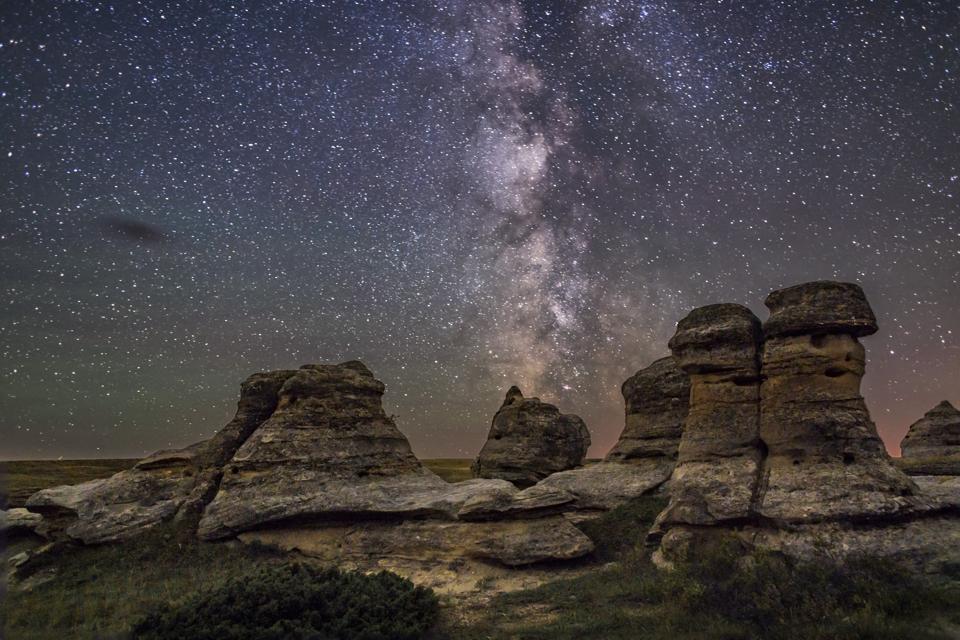 The Milky Way over the sandstone hoodoos of Writing-on-Stone Provincial Park in southern Alberta. … [+] This is a comppsite of a single 30-second untracked exposure for the sky with the Canon 6D at ISO 4000, and 24mm lens at f/2, as the final frame of a 300-frame time-lapse, with a 6.5-minute exposure for the ground, taken at the end of the time-lapse with the lens stopped down to f/4 and the Canon at ISO 1600 for lower noise and better depth of field. This final frame of the star trail time-lapse at Writing-on-Stone is made to crossfade to from the movie. Two versions of the ground are in the layered PSD file for demo purposes Ü 1) from a stack of the last 10 frames and 2) from a single 6.5 minute exposure with an LENR dark frame but the camera shifted a little so that image had to be manually aligned. (Photo by: Alan Dyer /VW PICS/Universal Images Group via Getty Images)

And here’s how you do it:

If it’s too dark, experiment with 25 seconds, or increase the ISO to 1600 or 3200. So much depends on your exact model of camera and the ambient light conditions, and this is little more than just the basic method.

Just remember to put something interesting in the foreground if you can, which will make a night-scape photo really standout. 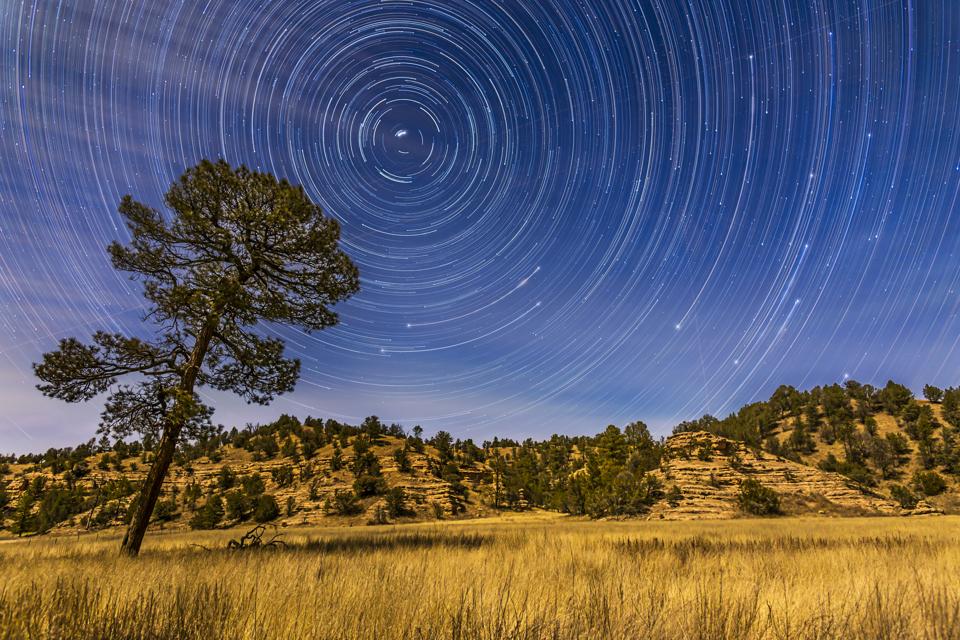 Circumpolar star trails over the moonlit Mimbres Valley near Lake Roberts in the Gila National … [+] Forest, in southern New Mexico. Illumination is from the waxing gibbous Moon. Polaris is at upper left, while the stars of the Big Dipper are rising at right, with just the Bowls Pointer stars visible at the start of the sequence, then rising to bring the entire Dipper above the horizon, with Alkaid, the end star of the handle, just clearing the ridge at right. (I had to wait till 10 pm for the star to appear so the entire Dipper would be in the final frames.) The sequence was shot over 3 hours. (Photo by: Alan Dyer /VW PICS/Universal Images Group via Getty Images)

How to photograph a star-trail

Perhaps the most mesmerizing night-scape photo of all is a star-trail that captures the motion stars. “Star trail images depict the motion of the sky on one frame [and] you can see the arc of the stars as they travel from east to west or circle the celestial pole,” says Dyer. “Everyone knows the Sun moves across the sky by day but the identical motion of the stars is less well known because people don’t spend the time outside at night to see it. The photos reveal it.”

A star-trail photo looks complex and impossible for an amateur to take, but only to the untrained eye. It’s actually pretty simple; just follow my above method for taking photos of the night sky, and repeat it multiple times without moving the camera (that’s really important!).

Decide whether you want to capture circles of stars around the pole, or stars moving across your photos in curved lines. That affects how long you need to take photos for. “How long you need to shoot for depends on what direction you are aiming,” says Dyer. “To the south the stars move more across the camera frame in a given period of time, so even five minutes is enough to show dramatic star trails.” The old-school way is to take a single long exposure, but its actually much easier nowadays to take a stack of shorter exposures and merge them using software. 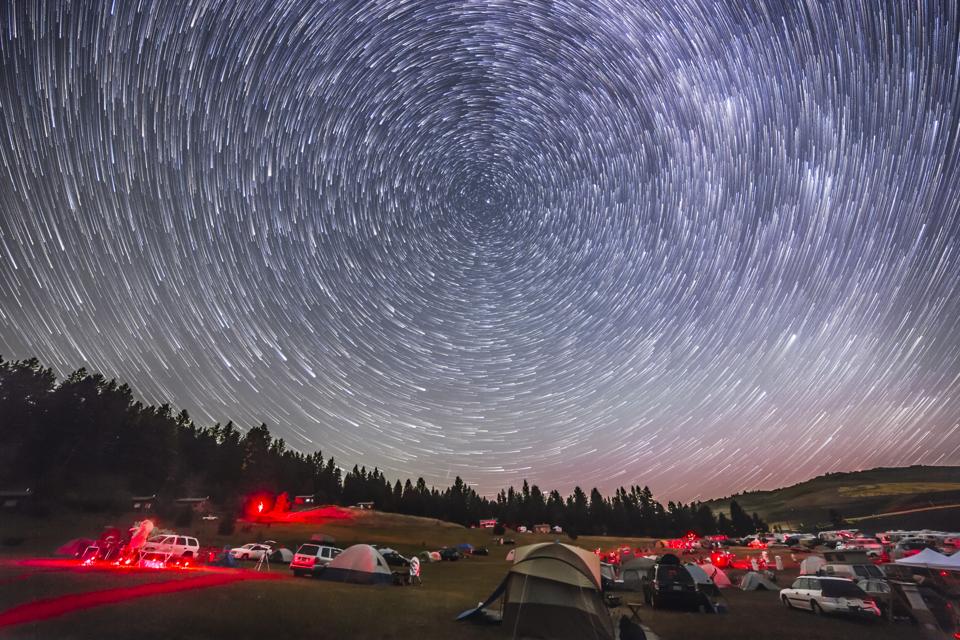 The northern stars turn around Polaris and the North Celestial Pole in a composite of 400 images … [+] taken for a time-lapse and stacked here using Advanced Stacker Actions in Photoshop to create the comet trails effect – Using Comets 90% mode. Taken at the Table Mountain Star Party July 26, 2014 using the 14mm Rokinon lens and Canon 6D. Each exposure was 45 seconds at ISO 200. (Photo by: Alan Dyer /VW PICS/Universal Images Group via Getty Images)

How long does a star-trail take?

“Shooting to the north, the circumpolar stars might need 15 to 30 minutes worth of exposures for the kind of concentric star trail image that is iconic,” says Dyer.

Here’s how you take a star-trail 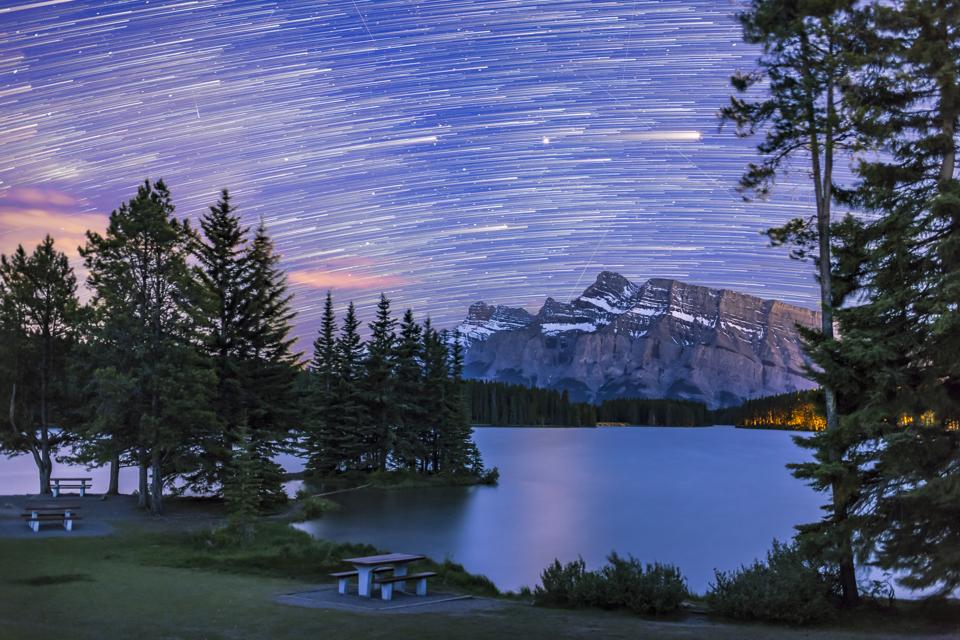 The stars and Mars trailing over Mt. Rundle and Two Jack Lake in Banff National Park, Alberta, on … [+] June 3, 2016. Mars is the brightest streak and object in the sky. Note the glitter path of Mars in the water. Satellites streak across the star trails. (Photo by: Alan Dyer /VW PICS/Universal Images Group via Getty Images)

When’s the best time to shoot a star-trail?

“There is no best time of year to shoot star trails,” says Dyer. “In summer if you shoot south you also get the bright Milky Way in the scene, as a bright blur on the final stack of images [and] in winter you get the fainter half of the Milky Way, but lots of bright stars in and around Orion.”

However, if you want to avoid those SpaceX Starlink satellites, go for late at night—but more importantly, do it now while you still can.