Breaking
‘Remnant: From The Ashes’ Is Cheaper Than Ever...
Top Stocks To Buy Today As Markets Rise...
Making America’s Trumps Pay Their Fair Share
Fortnite Season 4, Week 9 Challenges Revealed And...
Yesterday You Were Just A Business; Today You...
Should Your Company Help Get Out The Vote?...
Hyperautomation And What It Means For Your Business
Parker-Hannifin Crosses Pre-Covid Peak But Investors Set To...
6 Reasons Your Cold Messaging Efforts Fail And...
4 Analytics Categories To Track To Improve Your...
Predictions 2021: Cloud Computing Powers Pandemic Recovery
This Is Why You Need A Strategy In...
Economic Research Exposes Significant Flaws In DOL H-1B...
How Breast Cancer Turned This Entrepreneur Into A...
Bitcoin Price: What Next After Fresh Surge Toward...
Societal Platform Thinking
Home Business Spain’s Balearic Islands Pass Law To Crack Down On Booze Tourism
Business 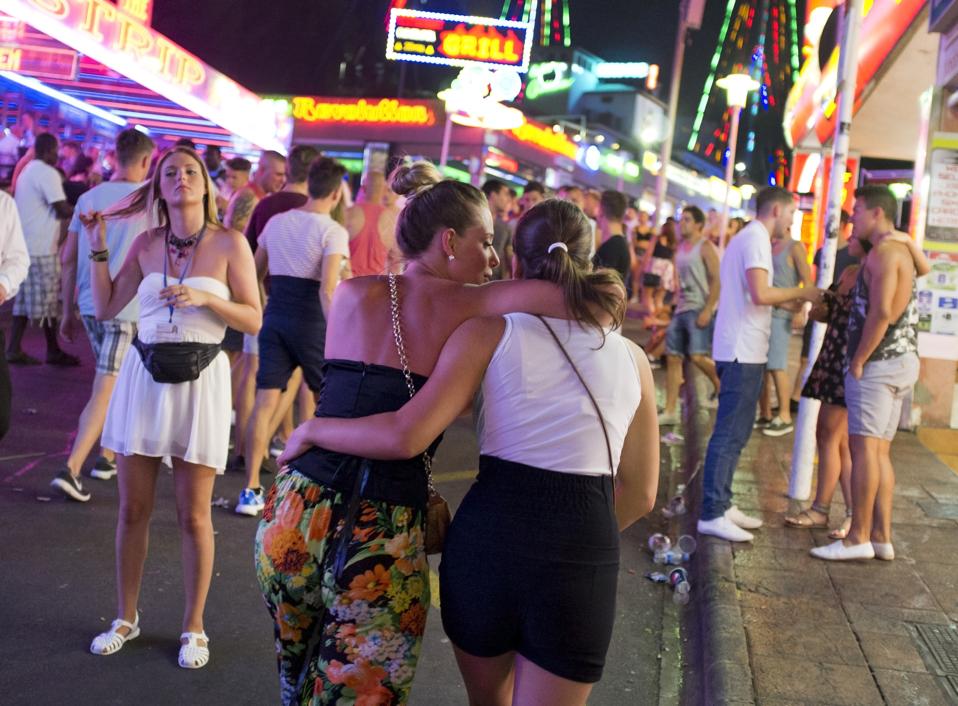 TO GO WITH AFP STORY BY ANNA CUENCA Young British tourists walk down Punta Ballena street as they … [+] have fun in the Magalluf zone, in Calvia on Mallorca Island late on August 1, 2014. The resort made headlines around the world last month after a video showing a young woman, wearing red shorts and a white tank top, performing oral sex on several men on the dance floor of a nightclub went viral on the Internet. AFP PHOTO/ JAIME REINA (Photo credit should read JAIME REINA/AFP via Getty Images)

The government of the Balearic Islands has approved a decree-law to curb alcohol abuse in the most tourist areas of the Spanish autonomous community.

Popular practices among visitors such as ethylic excursions, ‘balconing’, and free bars have now been banned in the pursuit of a more sustainable tourism.

Some areas in Ibiza and Majorca have long represented hotspots for European tourists —mainly coming from the United Kingdom and Germany— looking for boozy holidays.

“Noise, fights, dirty beaches … Booze tourism degrades the image of the Balearic Islands and creates insecurity and discomfort for residents,” the Balearic president of the Socialist Party (PSOE) Francina Armengol said after the law’s approval on Friday (January 17).

The measures adopted will last five years and are limited to certain areas of Playa de Palma, S’Arenal, Magaluf and the so-called West End of Sant Antoni de Portmany, where alcohol abuse is considerably higher.

“This is the first regulation adopted in Europe that restricts the promotion and sale of alcohol in certain tourist zones,” is highlighted in the text.

From now on, alcohol advertising as well as free bars, happy hours, and self-dispensers will be prohibited in the tourist hotspots. In addition, establishments that sell alcohol must remain closed between 9:30 p.m. and 8:00 a.m.

The organization and advertising of the popular ethylic tours, known as pub crawling, have also been banned together with the party boats. New licenses for these boats have been suspended while the boats that can continue their activity will not be able to pick up or return customers in the restricted zones.

There is one prohibition that applies throughout the Balearic Islands. Every summer, news broadcasts show new cases of tourists dead or injured after jumping from hotel balconies into swimming pools.

This practice, known as “balconing”, has been prohibited for endangering people’s life and physical integrity. Those persons breaking the law shall be “immediately expelled” from the respective establishment under the consideration of “serious misconduct.”

According to the government, this pioneering decree will ensure the respect to “both the environment and the quality of life of tourists and residents.”

The drafting of the decree-law took place in the framework of a dialogue between institutions, social agents, businesses, and employers.

Most of the social and economic actors agree that certain anti-social behavior caused by alcohol abuse has been long affecting the Islands’ image.

The vice president of the Spanish Alliance for Excellency in Tourism (Exceltur) José Luis Zoreda talked last week about the vulnerabilities of some “sun and beach” destinations.

“Our great challenge is to improve our tourist offer,” said Zoreda, who believes that Spain will never go old fashion as a tourist destination but should pay more attention to sustainability rather than volume.

In 2019, tourist activity grew by 1.5%, meaning it is progressing at a slower pace than the Spanish economy (2%) for the second consecutive year. According to Exceltur’s forecasts, this trend –contrary to previous years’ tendency— will continue in 2020.

“This is something that should lead us to a reflection,” the association’s vice-president explained.

According to the Balearic government, the new decree will “force a real change in the tourism model of these destinations.” By promoting civic-mindedness, the executive aims to increase the competitiveness and quality of the islands.

“This way, the investment effort made in recent years by the private sector will be rewarded,” the decree establishes.

How To Utilize LinkedIn In 2020 To 4X Your Revenue