Breaking
Looking To Improve Efficiency In Your Business? Here’s...
AI and machine learning for business
How Social Media Changed the World
Shopify: The Pros and Cons
Should your business go green?
Expanding Your Business Into Spain: What You Need...
Essentials For Your Office Coming Out Of COVID-19
What Can Marketers Learn From Digital Cults?
Why NASA’s James Webb Space Telescope Will Never...
Increasing HR Effectivity and Efficiency through Software Solutions
The Difference Between Building A Startup In Bull...
Fluor Corp Ranked Among Today’s Top Shorts
Common Pitfalls to Look Out for When Buying...
Will the Olympics go ahead this year?
Pack Up the Big Top: Insights from MozCon...
Best WordPress Themes for Blogs
Home Finance Spain’s Sánchez Confirmed As PM Of Leftist Coalition: What Are Their Priorities For The Economy?
Finance

Spain’s Sánchez Confirmed As PM Of Leftist Coalition: What Are Their Priorities For The Economy? 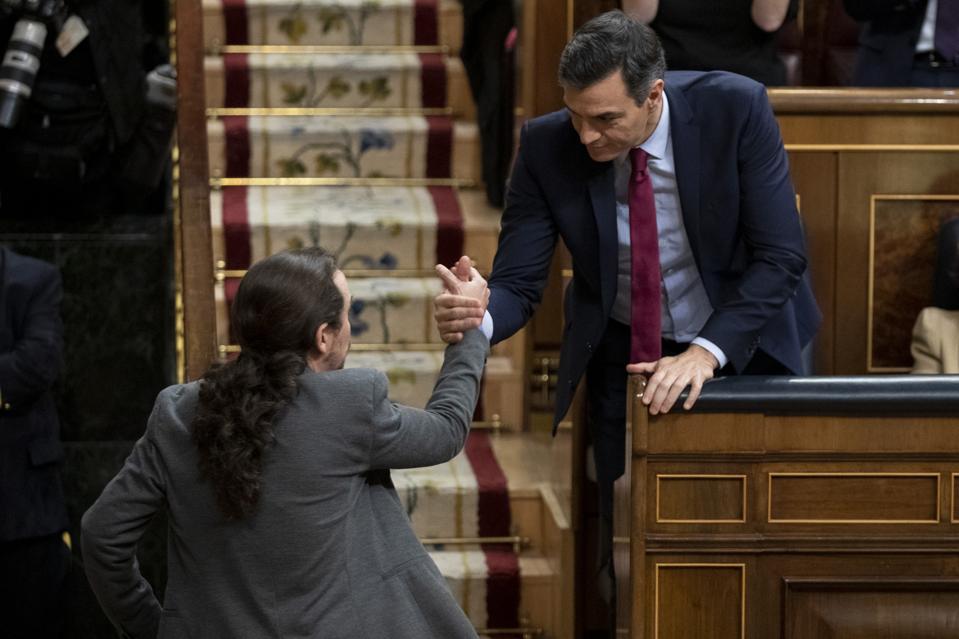 The Socialist Party (PSOE) leader received the votes of its coalition ally Unidas Podemos and other smaller regional groups such as the Basque Nationalist Party (PNV) and the Galician Nationalist Bloc (BNG).

The pro-independence Catalan Republican Left (ERC) and the left-wing Basque nationalist EH Bildu helped Sánchez with their abstention, while the main right-wing parties–People’s Party (PP), Vox, and Ciudadanos–voted in opposition.

The victory came in the second voting round in Parliament, at which the candidate to the presidency only needs more “yeses” than “noes” to be elected. Sánchez failed the first round that was held last Sunday when an absolute majority was required.

The close result of 167 votes in favor versus 165 votes against and 18 abstentions reveals a complex mandate that will be marked by clash between the reform ambitions of the coalition partners and the need of external support to pull them through.

The escalation of tension between the left, right, and nationalist blocks that intensified during the electoral campaign has only increased ahead of the new mandate.

The opposition has maintained a very aggressive tone throughout the vote, calling the Sánchez an ally of the “coup perpetrators” and “terrorists” in reference to the Catalan and Basque parties that allowed the government’s formation.

The PSOE’s agreement with the ERC to get the party’s abstention in exchange to establish bilateral negotiations between Spain’s central government and the Catalan executive has triggered the anger of the right-wing and other small groups.

During the debate, Sánchez was accused by the opposition of forming an unconstitutional government that would “break Spain’s unity.”

Some deputies supporting the socialist leader have denounced strong pressures to change their yeses for a no in order to prevent the coalition from succeeding.

The new government aims to carry out deep social and economic reforms. But this task will not be easy, considering the parliament’s fragmentation and the minority government despite the coalition with Podemos.

The PSOE-Podemos governing program focus to a large extent in “tax justice measures.” In this regard, the coalition partners have agreed to raise taxes to high incomes and large companies while lowering them for SMEs.

The program foresees a reform of the Corporate tax as well to guarantee a minimum taxation of 15% of large companies, which would be extended to 18% for financial institutions and hydrocarbon companies.

The labor reform approved by the conservative People’s Party (PP) during the economic crisis will not be entirely repealed as requested by Podemos. However, the coalition partners have agreed to overturn some of the “the most harmful parts” of the law.

This would remove the possibility of dismissing due to absenteeism caused by sick leave and put an end to the priority of the application of companies’ collective agreements over the sectoral ones.

The PSOE and Podemos have also planned to raise the minimum wage to progressively reach 60% of the average salary in Spain, although they do not specify within what time frame.

Regarding housing politics, the text indicates that “the necessary regulatory measures will be promoted to put a ceiling on abusive increases in rental prices in certain areas of the stressed market.”

To achieve any of these reforms it becomes essential for Sánchez to pass the 2020 General State Budget, which is linked to the tax regulation and other major law amendments.

Last year, the Congress’ rejection of the PSOE’s General Budget forced Sánchez to call new elections. The approval of the new government’s 2020 budget will be the first and main challenge of the leftist coalition to ensure stable governance for the next four years.